Posted on October 2, 2010 by Paul Cook Leave a comment

This time last year, Tom Tombleson was happy just to be up and about and fighting fit. Rugby, the game that had given him so much pleasure since he first picked up the oval ball at 8-years old, was the furthest thing from his mind. The former England Sevens flyer had good reason for his ambivalence to the sport, given his last outing over the white lines had resulted in a three-week stay in intensive care.

Having passed through Oxbridge’s famous halls of education, Tombleson found himself teaching as an A-level tutor at a sixth form college in Oxford, as well as undertaking a strength and conditioning role for the Oxford University Varsity team. After a professional contract broke down at the last minute at the start of the 2009 season, he relocated to Sydney for a year’s work experience, and found himself a strength and conditioning role with Sydney University.

It wasn’t long before he found himself wearing the famous blue and gold jersey, and it was in a lower grade game against Northern Suburbs towards the end of last season that a high tackle caused an injury to a major artery in his neck. He was taken to hospital, the artery clotted, and he suffered two strokes during the night.

After a week on the critical list in intensive care, he recovered well enough to be allowed to leave hospital where he took stock of life – and rugby – before returning to his strength and conditioning role at Uni, impressing enough to earn himself the S&C job with the NSW Waratahs. After a period of indecision, the desire to get back on the pitch proved too strong, and Tombleson took an understandably cautious journey back to the playing field.

“After getting medical clearance, I began playing for Sydney Uni again this season,” he explains. “But paranoia and reservations about my neck set in, and I packed up playing in March for what I thought was for good. But after moving to Coogee to be closer to work, I started gaining confidence again with my health, so I persuaded myself to try and play again with Randwick – thinking I’d try somewhere in a different setting and closer to home.

“I was missing being competitive, and rugby is what I’ve been doing all my life and I didn’t want to regret not playing when I’m older at a time when I don’t have the chance to play again. There may also have been a part of me that didn’t want to finish playing having not played any first grade in Sydney. And after a few games in the lower grades, I made my way up to first grade and have been there ever since.”

Not only has he held his position within the starting XV at Coogee Oval, he’s performed to such a level that there had been some whispers around the traps that the Waratahs were actually considering him for a playing contract in the expanded Super 15 next year. Tombleson doesn’t entertain such fanciful notions, indeed, he was clearly embarrassed by the suggestion when I put it to him. He is merely content to concentrate on the day-to-day life of working in a professional rugby environment with professional players. It’s a vocation he clearly enjoys.

“I’m very happy with the day job,” he beams. “I get a real kick from being around the environment at the Tahs, so I would say I’m not particularly looking to play professionally again. At the moment I have the best of both worlds, working in the professional environment but playing amateur rugby with great players at the weekend. Maybe, if and when I return to England, and if that was sooner rather than later it might be a possibility. But I don’t have much time left to do that and still develop my career, as not many strength and conditioning jobs enable you to still play competitive sport at the weekend.” 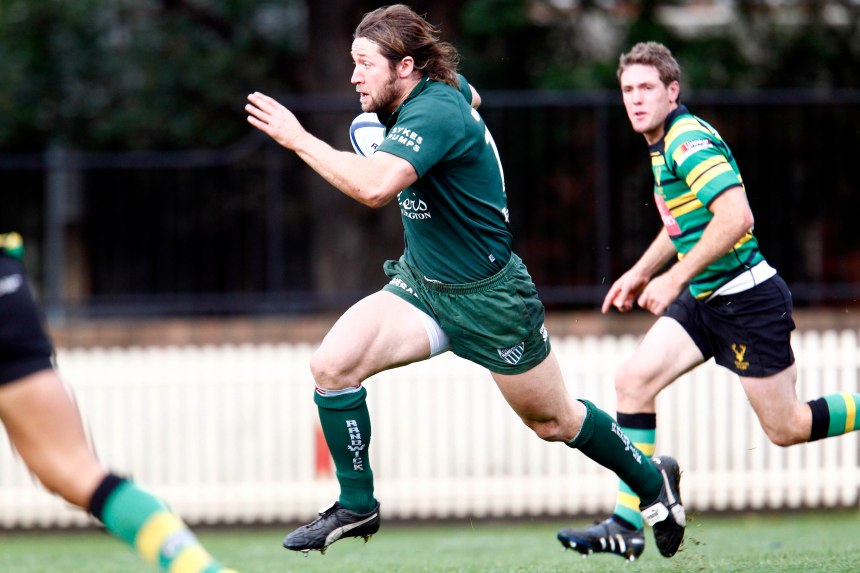 Blessed with pace, power and athleticism, Tombleson has been a handful in 2010 – Photo: SPA Images

His return to an elite playing level will be complete today when he trots out in the myrtle green at Concord Oval to face – ironically – Sydney University. Although humbled to be a part of the Grand Final experience, he does feel somewhat uncomfortable about facing his old side.

“I feel very fortunate, it will be a great playing experience to draw from. I didn’t imagine I would be playing for anyone other than Uni, let alone against them in a Grand Final, and I do have mixed feelings about that.”

Working with elite athletes everyday is one thing, playing alongside them is another. I asked him how he handled the fact that he’s going into battle alongside a host of Super Rugby and international players. Isn’t it daunting?

“At the end of the day they’re still just Randwick players, and that’s how you’ve got to look at them otherwise you could be starstruck,” he reasons. “It’s just twenty-two Randwick players trying to get a result at the weekend, and as long as you all think like that, you should all be able to contribute equally. I’m 27, I’ve been around a while now and played a bit of footy in many different walks of life. I think it’s just about not thinking that you shouldn’t be there and trying to rise to the occasion.”

I wondered if the fact that he deals with those top level players as a part of his job, helps to quell any feelings of being a fish out of water?

“You get to see and appreciate the pace and the intensity of elite rugby, so it’s not completely alien when you encounter it for yourself and like I said, you tend to rise to the occasion even if it’s above yourself. You just try to slot in I find.”

Had there been any banter between the players and their day-to-day coach?

“Yeah, its certainly novel! There can be a role reversal in both settings, being a coach of these blokes at work but then, when I’m a teammate, I listen to their instruction on the game. Pride isn’t an issue for me in that respect in terms of the changing authority. I listen with open ears to those guys because they are experienced high-level players.”

Having played Sevens for England all around the world, Tombleson has already enjoyed some memorable experiences in the sport. But he admits that running out for a Shute Shield Grand Final alongside some of Australia’s finest players is hard to top.

“My first Sevens tournament will always be a highlight for me, as wearing an England jersey of any description – particularly a senior team – has always been a big deal to me, and was a goal of mine for a long time. I’d put the Grand Final on a par with the Varsity matches I played for Oxford University against Cambridge University. But in terms of player calibre on the field, it’s very much a pinnacle for me.”

He wasn’t here for the last two title deciders that saw the Galloping Greens fall short against Uni. But he was well aware of the desire to turn that around and make it third time lucky.

“I think the motivation is the same for any Grand Final, but even more so if we can correct a couple of wrongs from the last two years in terms of not getting a victory,” he says. “We’re going to be really up for it and we’ve got a really good 22 now, so there’s no reason why we can’t turn over anyone. We’ll give it everything, we’ll prepare well, I don’t suppose we’ll change too much, and we’ve got as good chance as anyone on our day.”