Emus pegged back by Pirates in opening day thriller

West Harbour have pulled off a stirring 2nd half comeback to open their season with a 27-all draw against Penrith at Concord Oval. Having trailed the Emus throughout the course of the match, a penalty from Shaun Treweek after the siren brought them a share of the spoils. But the visitors took home a bonus point after crossing for four tries.

After a breakthrough season in 2010 under Shute Shield Coach of the Year Matt Briggs, Penrith were keen to start 2011 with a bang, and by achieving something that still eluded them last year – a win away from home. After just over an hour of this match, leading 27-17 and having butchered numerous opportunities to add to their tally, Briggs could have been forgiven for thinking his side were well on their way to another ground-breaking win under his reign.

Whether it was through complacency, waning early season fitness levels, or the dazzling headlights of their rare impending achievement, a game that they’d looked capable of running away with at one stage, was suddenly in the balance as the home side rallied to drive their hesitant opponents back through some impressive forward play. The gifting of quality possession to their opponents was key, and was something Briggs was at a loss afterwards to explain:

“How many opportunities did we bomb?” he bemoaned. “It was just our own poor discipline and our own silly mistakes, like guys trying to perform miracle passes, that cost us. That’s all well and good if you want to play park football. But when you’re playing in the toughest club competition in Australia, you cannot afford to throw the ball away, you’ve got to value it.” 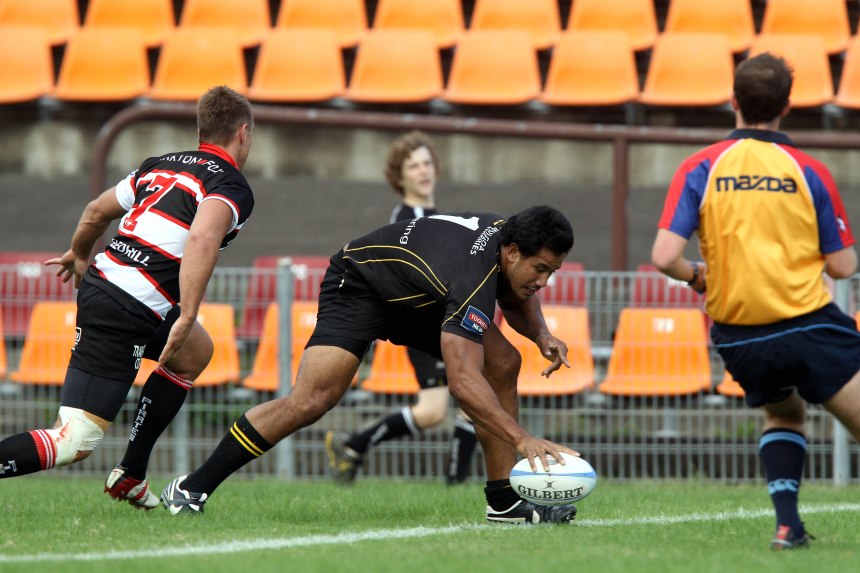 He was also at a loss to explain exactly how, with the ball in their possession, a three-point lead still in hand – despite the effort from their hosts – and the full-time siren ringing in their ears, they contrived to turn certain victory into a draw, and very nearly defeat.

It’s unfair to single out one player, for the team as a whole contributed to the opening of the door for the Pirates comeback. But the fact that replacement scrumhalf Solomona Silipa sliced his match-winning touch finder into the arms of a waiting Pirate instead, cannot be ignored. His coach adopted the forgiven but not forgotten line.

“For the siren to go and for the halfback to go and kick what was supposed to be a ball into touch down a second rowers throat, it became a bit of a debacle to be honest,” said Briggs. “Solomona will hopefully never make the same mistake again, and it was a shame because he was man of the match in second grade, he was outstanding.”

What cannot be understated is the magnificent effort of West Harbour’s forwards to capitalise on the mistake, and make sure their side came away with at least two competition points for their efforts. Not only did they secure the draw, they then went within a whisker of snatching victory as Penrith desperately defended their goal line from a wave of destructive pick and drives. The discipline, patience and execution shown under pressure in those frantic post-siren minutes was admirable, and will stand them in very good stead for the battles ahead.

Touted to be one of the season’s strugglers given the degree of notable losses from their ranks in the off-season, Wests will have quietened more than a few doubters with this performance. New head coach Andrew Cox – although not quite in agreement as to where the balance of power lay in the match – was certainly pleased with his side’s application, particularly in those frantic closing moments.

“That’s the sort of stuff that’s going to hold them together now, it’s the sort of glue that they needed,” he said. “They needed to know that they could rely on each other, and I’m really heartened by that. Whether we dodged a bullet, I don’t know. I’m not sure whether they were dominant enough in the second half to say that they let us back in it.”

It hadn’t been the best of first halves for Wests with Emu prop Dave Coventry going over early, before his side put the foot down in the 10 minutes prior to half-time. Further tries from Stan Tuionuku and Ateloa Okati sandwiched a barnstorming reply from Wests centre Henry Seavula, to give the visitors a half-time lead of 19-10.

Influential prop Coventry left the field two minutes after the restart, and the impact of his absence should not be downplayed. The Pirates’ forward domination from this point on was as much a catalyst for their revival as the Emus’ profligacy, and was immediately tangible as a good shove from five metres out gave halfback Jeremy Su’a the space to sneak under a tackle and stretch for the line.

Flyhalf Shaun Treweek’s conversion, and a penalty from his opposite number Gavin Duncan, made it 22-17 before the Emus scored their bonus point fourth try on the hour through Sonny Tavelea, and appeared to have the upper hand.

However, the homes side’s forwards took control, using an impressive driving maul as a weapon to force the Emus onto the backfoot, eventually plundering a try through tighthead Vaughan Lomax. Treweek converted to leave them 3pts behind, before that climactic finale and another penalty punished by his boot drew both sides level, and left wondering what might have been.

“There’s a lot to be encouraged by in the game but there’s plenty of stuff to work on. I thought we fought our way back and look, we made some errors, we made some mistakes, but I don’t think we’re going to make those mistakes again. We’ve got a tough road ahead but we’re on the board and we’re away, so I mustn’t grumble really.

“This team is a brand new team, there’s five or six guys from colts, there’s guys who have come up from lower grades, and we don’t have the benefit of being able to rely on combinations, so it’s going to take a while to get going. Unfortunately, we don’t have a hell of a lot of time to do that, so we’ve just got to keep fighting away.”

“The boys were hurting after that game, and maybe that’s what’s required of us to get a true understanding of what this really means. After a little bit of self-assessment during the week, hopefully we’ll come out and put those mistakes to bed.

“I’m not the kind of coach that goes off. I think players are mature enough and responsible enough to learn from errors. But I certainly left them knowing how I felt about their second half performance. I was very disappointed in them, and for them, because that’s two competition points that they’ve just handed back, and the competition is going to be too fierce this year to be making those sorts of basic errors.”