Rampant Shoremen get off the mark against Emus

Northern Suburbs have finally got their season underway, with a late second half surge against a below par Penrith lifting them to a 44-22 victory at Nepean Rugby Park. With a raft of off-season imports, the Shoremen were hotly tipped to be big improvers before a ball was kicked this year, but went into the game with nothing on the board after losses to Easts and Wests respectively in the opening two rounds.

Former Wallaby flanker Scott Fava, who’s joined the head coaching ranks at Norths alongside Grahame O’Donnell, admitted they both had good reason to be pleased with the win.

Skipper Nick Lah was also happy to break the recent Nepean hoodoo, and admitted that the added weight of expectation for the team had been a burden.

“It was a good performance and good to get the five points, especially out here, so I was pleased to come away with the bonus and play some decent footy as well,” he said. “It’s been a big difference from last year when we weren’t talked about, whereas this year, we’ve had some transfers and a bit more pressure on ourselves. I think this week, we’ve tried to take that pressure off, we knew our processes and we showed what footy we can play, so we’ve just got to build on that and do it again.”

Australian Sevens representative Zack Holmes was the standout, claiming 29 of his side’s points with two tries, five conversions and three penalties, and it was the pace and anticipation of the 20-year old that helped the visitors take a 14-0 lead in the opening quarter. However, on an afternoon of black clouds and driving rain, the Emus weathered their own storm to strike back and get a foothold in the match, flyhalf Gavin Duncan converting his own good work. 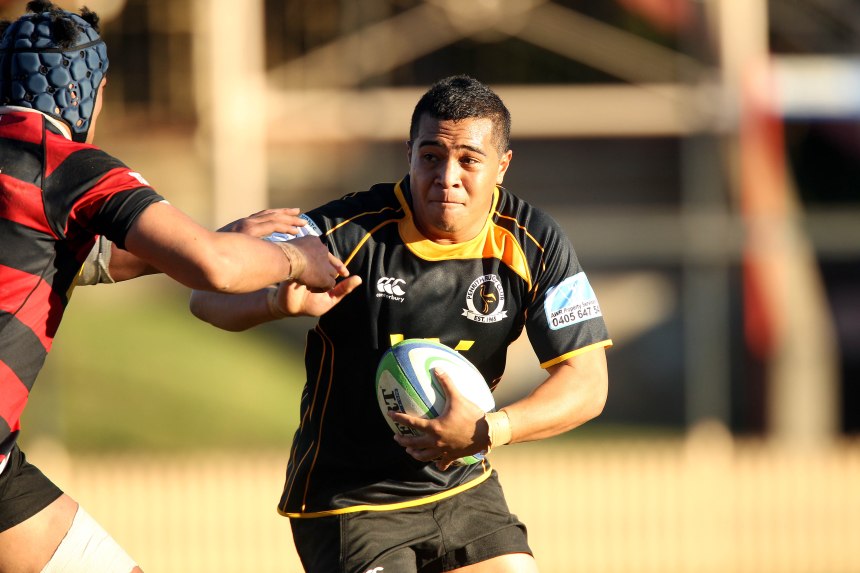 Henry Lilomaiaiva crossed for a double for the Emus – Photos: SPA Images

When Henry Lilomaiava burst through a gap off a short ball to get his side back to within 3pts at the half-time siren, the complexion of the game appeared to have changed. But despite the fightback from his side, Penrith head coach Matt Briggs had already seen the writing on the wall.

“I certainly wasn’t confident at half-time,” he admitted. “I told them that we’d worked well for five to 10 minutes in the first half but were only 3pts behind, and that we had to keep the ball in hand, work hard into the wind, and be prepared to do the hard yards. But it’s almost like they thought the task today was a little bit too much for them. They couldn’t see the light at the end of the tunnel, they couldn’t see a victory or a result, and when there’s no belief in themselves as individuals, it tends to spread across the team.”

Conversely, the Norths dressing room remained upbeat, and Lah was confident that they had it in hand to go on and triumph.

“Our scrum and our lineout were dominant, so we knew that if we could control it there and keep them in their half, then we could come away with the points. We knew that if we stuck to our game plan that we’d be able to come over the top in the end, and I think we showed that. The last 20 minutes really showed our hand. We shifted the ball, controlled it, and just shut them out of the game in the end.”

And show their hand they did, with some impressive counter attacking having done the hard yards early to shut down the Emu’s offence. Despite levelling the scores moments after the restart through a Duncan penalty, the home side barely visited their opponents 22 for the remainder of the game until a late consolation, such was the paucity of opportunities offered by a controlled and disciplined effort from the Shoremen.

Steve Evans was terrific off the bench for Norths – Photos: SPA Images

Diminutive in height but a giant in terms of body strength, scrumhalf James Price had already softened up the Emu’s underbelly for an hour with a physical and energetic effort across the park, when club stalwart Steve Evans took his bow for the final flourish. His arrival, in tandem with last season’s star performer Cam Crawford who was returning from injury, was the catalyst for Norths to pull clear in style.

Evans put centre Bill Meakes over in the 65th minute, before a neat reverse pass five minutes later from the impressive Samu Wara led to Crawford running in the killer score. Coach Fava was effusive in his praise of the replacement no.9.

Shackled since the break and with a succession of handling errors cruelling any tangible comeback, Lilomaiava offered a glimpse of what the Emus are capable of when he skipped through with a couple of minutes remaining for his second. But any thoughts of a bonus point fourth try were crushingly dismissed by Norths determination to keep their foot on the throat until the final whistle.

Awarded a five-metre penalty after the siren, skipper Lah ignored the pleas of a windswept and dejected home crowd to kick the ball dead, calling for a scrum instead, and his decision was vindicated when AJ Gilbert drove over. It was a fitting reward for the industrious flanker, and added insult to injury for a Penrith side that must regather itself quickly before the season runs away from them.

“The biggest thing for us is that we’ve got the nucleus of the side that was around last year. But we do have other guys that we’ve added to the group, and we’ve just got to get to know each other.

“We had a bit of disruption during the week. Samu Wara was down at the Captain’s Run with the Brumbies the week before, so he hasn’t trained with us for the last two weeks, and Zack Holmes is coming in and out of Sevens. So we just need to get everyone training and playing together to get to know each other, and once we get those combinations down pat and everyone seems to know how we want to play, I think this is a building block. Hopefully we can move on from here.”

“It was a poor performance on our behalf but take nothing away from Norths, they came out and they were desperate, and we knew they were going to be a good challenge for us. But unfortunately, the psyche of a few of the players in the side wasn’t right on the day and that’s all it takes, you only have to be off two or three percent and you won’t get the result.

“Admittedly, 14 points in the last 10 minutes for them probably flattered the score. But having said that, we scored with five to go and we were just desperate to get the four tries to try and salvage something out of the game ,which ultimately cost us another try anyway.”

“Our defence was a big focus during the week. It was about putting some big hits on, and I think we did that throughout the game. It wasn’t consistent and that’s something we’ll have to work on, but certainly the passion is there. We were really belting them and that’s pleasing to see.

“It’ll be tough next week against Gordon, we’ve just got to grind it out again and try and build some momentum. It doesn’t matter what Gordon side are running out and for us, it’s just the next process. Try and build back-to-back wins and go from there, and that’s our focus.”