West Harbour have put a serious dent in Southern Districts’ hopes of a second successive season of finals football, and prevented a winning start for new coach Steve Talbot in the process, by downing the Rebels 31-25 at Forshaw Park. The home side had the luxury of adding new recruits Nick Cummins and Cooper Vuna to their ranks. But what was their strongest team of the season on paper failed to gel, and struggled to break down the Pirates resolute defence as the visitors racked up a four tries-to-one victory.

The result also revived Wests hopes of playing on into late September, and their chances of achieving that goal would be far greater if Rory Sidey was available for the rest of the season. The Western Force centre was a giant in the midfield battle and showed his class when given the opportunities in attack, and the Pirates could be forgiven for hoping his four-match cameo before heading back to Perth could be extended.

The Rebels had pulled off a late surprise when Cummins, Vuna, Dan Palmer and Graydon Staniforth ran out for the kick-off, despite not being named in the midweek team listings. It certainly caught West Harbour coach Andrew Cox unawares, however, the numbers on their relative shirts did offer up a potential target for their game plan.

“I couldn’t get a team list so I didn’t know who was actually playing until they ran out. They were warming up and we saw Nick Cummins and Cooper Vuna, and Rory Sidey said to me ‘They’ve got a 13 [Nicky Price] playing wing and they’ve got a winger [Vuna] playing 12, where do you think we should be going?’”

And it was Sidey who struck the first blow when he picked up the scraps from a charge-down on halfway to stride over. Shaun Treweek added the extras and the Pirates had the start they wanted. But a lot off huff and puff from the home side with little in the way of gilt edged opportunities, did procure six points from the boot of Jordan McGregor to narrow the deficit to a point.

The Rebels had plenty of possession but – perhaps as a result of the influx of new personnel – were lacking in combinations, and many promising looking phases ground to a halt on the back of a dropped ball, a pass behind a runner, or players hitting the same lines and becoming an easy target. It has to be said that their cause wasn’t helped by the impressive defensive work of the Pirates as well, who were up in their faces and tackling to a standstill. 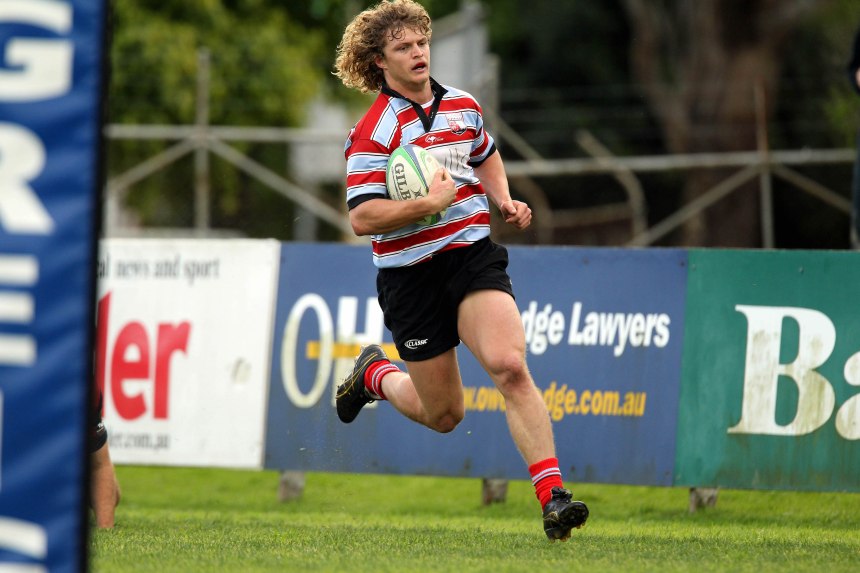 Nick Cummins was one of the Rebels’ best in a losing side – Photo: SPA Images

Rebels head coach Talbot, who only met his new team at the midweek training session after replacing Darren Bray (who will now look after youth recruitment and development) conceded that the late availability of the newcomers played a role in the lack of cohesion. But he also admitted that maybe his side hadn’t gone into the game with the right mindset.

“I think we might have underestimated the opposition a bit. They put some really good pressure on us in defence, coming up and taking our space. We had plenty of ball, we just couldn’t get into a rhythm and put any pressure on them. It just always seemed to come back.”

Significant pressure on the Pirates line didn’t produce any reward, with a few kickable penalties being turned down in favour of scrums. But another mistake from the hosts led to a second try for the visitors. A speculative high ball from fullback Liam Windon was spilt by opposing scrumhalf Grayson Hart, and Windon was on hand to kick the loose pill ahead into empty space and score under the posts.

The alarm bells were well and truly ringing when Isaiah Pine plucked an intercept out of the air almost immediately after the restart, and offloaded in the tackle to Macquire Tatola for try number three. Treweek’s 100% boot made it 21-6 at half-time, and having also lost Brumby prop Palmer to injury, the first 40 minutes had turned into a bit of a nightmare for the hosts.

McGregor settled his side two minutes after the break with a long-range penalty. But a similar pattern to the first half emerged, with the Rebels having the majority of possession but very little penetration, and their impatience and frustration was evident by the use of low-percentage kicks that all too often wasted any momentum.

Another penalty on the hour saw them back themselves to go the long way round in terms of a comeback, as despite being 12pts behind on the scoreboard, captain Tetera Faulkner pointed to the posts.

That decision was vindicated somewhat when McGregor slotted his fifth penalty of the game to leave them trailing 21-15. However, Wests had other ideas, and from virtually their first foray into the Rebels half in the second stanza, Treweek and Sidey concocted a defence-splitting play that put the rampaging centre through a hole, before a no-look pass fed Tito Mua to the line. 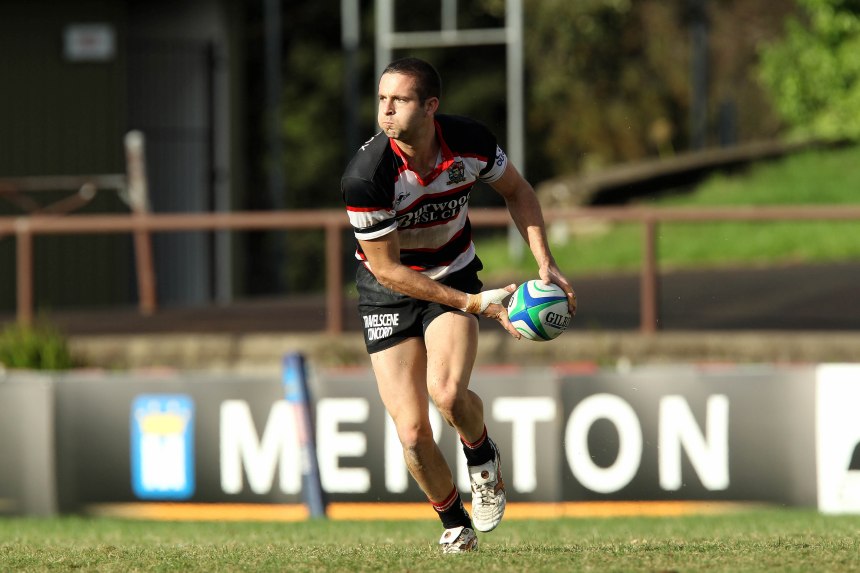 Liam Windon chimed in with another try from fullback for the Pirates – Photo: SPA Images

Treweek added the extras, and Sidey felt that the timing of the try was crucial to the final result. “That can demoralise a team when you score a try like that, especially when they’ve been working so hard and only coming away with three points each time. Every time they did kick a penalty, we felt that was a positive and a bit of a compliment.”

With 10 minutes to go Souths finally chanced their arm and went for broke when Cummins – their biggest threat all afternoon – broke free from a ruck and put a clever crossfield grubber in for Vuna to dot down. And after the two sides traded further penalties in the last 10 minutes to leave the visitors holding a six point lead, it was all set to come down to the final play of the day.

With the Rebels camped on the Pirates five-metre line and slowly inching forward in search of the match winner, referee James Leckie blew his whistle. For one brief moment, both sets of players seemed to think he’d awarded a try, and confusion reigned over the arm signal given to accompany the decision, which turned out to be a penalty in favour of the Pirates.

“The only person who can pick the ball up from a ruck is the last person in that ruck,” Leckie explained afterwards. “If you’re not the last feet of the ruck, you can’t unbind and pick up the ball, so I deemed that someone who was not the last player in the ruck picked up the ball and went forward. But to be honest, I could have given a better signal for it.”

Thus, the penalty went to Wests and with it – and deservedly so, the game.

“We put pressure on at the right end of the field by being aggressive in our defence. The main difference between the two teams was that when they had the ball, we rattled their cage and when we had the ball in good field position, it just seemed almost a foregone conclusion at times that we were going to get over.

“We’ve won three of our last four so we must be doing some things right, and I think that what’s happening is that the defensive game and the attacking game are coming together. We’ve been working hard on that as a team and it’s starting to work.”

“Today’s a real disappointment. We prepared to win it, and the talk before the game was that this was a very important game and we have to put this one away, and we didn’t. We didn’t really have a general out there, and when the defence is pressed right up on you I think you have to make some decisions, and I don’t think we did that very well.

“We have to look at other results but we basically need to win every game and clock up some bonus points, so the pressure’s on.”

“We were defending quite a lot and it was good that we could hold out and when we did get the ball, we were quite smart with it. I think our structures were working well and with a few changes in their side, you could definitely tell that their structure wasn’t quite there.

“When you’ve got guys that haven’t played together, especially guys who are predominantly wingers playing in the centres, it’s a tough position defensively and tactically. So it was definitely the place to target, no matter how good the individual is.

“I saw the ref put his hand up and blow the whistle and I thought ‘Oh no, it’s a try’. But then I saw he was pointing towards us and I thought ‘You ripper!’ So I didn’t see it, I was too busy patting heads at that point!”

“The first 20 is really crucial, and I felt we gave them that first 20. I think in the second half we played better, we regrouped, and showed some good signs there. So hopefully we can start a bit better next week. We did have a lot of ball but we made a lot of mistakes. West Harbour thrive off that broken play and they play a lot better off it, and it’s always going to happen when you play catch up rugby in terms of throwing the ball around. It is risky, so I guess if we can start better next week we can hopefully play some better footy.

“I think Tetera captained well and made good decisions to go for the points, we just wanted to chip away and see if we could wear them down a bit and score some points after that. I don’t think there was a lot of panic, we tried bringing it in tighter, we tried getting points out of every opportunity we could get and Jordan [McGregor] kicked well for us today and he played well.

“Last year we played well and we had a good team from round one to the semi-finals. We had pretty much the same team and that worked in our favour, but this year’s been up and down. A couple of guys that played Second Grade today stepped up and played First Grade earlier in the year, and they’ve done a great job. Those young blokes bring a lot to the team. They bring the counter attack and they have that presence when you play with them, and they like to do well for the club.

“As a team, we can build on this and hopefully, we can sort out or combinations because the players out there are good enough to work off combinations straight away, it’s whether we apply it on the day.e need to win every game from now on to play the semis and now, we’ll have the same team week-in, week-out.”