Emus fall short as Parra edge battle of the West

Penrith are still awaiting their maiden victory of the season after being edged out 37-34 by local rivals Parramatta on Saturday. A converted try in the final minute of a pulsating clash at Merrylands RSL Rugby Park deciding the battle of the West.

Having led 22-10 on the half hour and 34-25 on the hour, the Emus had looked likely to earn what would have been their first triumph since 2012. But they couldn’t hold out against a determined Two Blues outfit who have now earned their third win of 2014 to sit just inside the top six finals placings on the ladder.

Parramatta coach Gerrard Fasavalu was pleased to see his side come through a stiff test from a rapidly improving Emus outfit. “It was a see-saw affair that definitely kept spectators on the edge of their seats,” he enthused. “Our execution needs to be improved dramatically. We blew too many opportunities and weren’t clinical enough. But we never underestimated Penrith in what they were capable of, they pushed us to the end and you have to give credit to them.”

Captain Andrew Cox was happy to see a Two Blues side shorn of some regulars, step up and get the job done. “Considering we had a number of changes to our side and a couple of debutants, I was really pleased and proud of the boys for getting the full five points,” he said.

“We knew Penrith would try to take us up front then use the ball out wide whenever they could, so there was always the possibility for an open game of rugby. But our boys knew that if we stuck to our structures and played the tempo we wanted too, we would come home strong. Fortunately enough today, we did that.”

Penrith coach Teki Tuipulotu meanwhile, was treading a familiar and frustrating path. “It’s very disappointing as we should’ve put the foot on the throttle and killed it off but we didn’t,” he bemoaned.

“The problem is that we put the pressure on and then we let them back into it with basic errors. We tend to have lapses and it shows the inexperience we have – the squad has an average age of 22. If we had a few old heads to guide these youngsters around then we would’ve sealed some wins by now.” 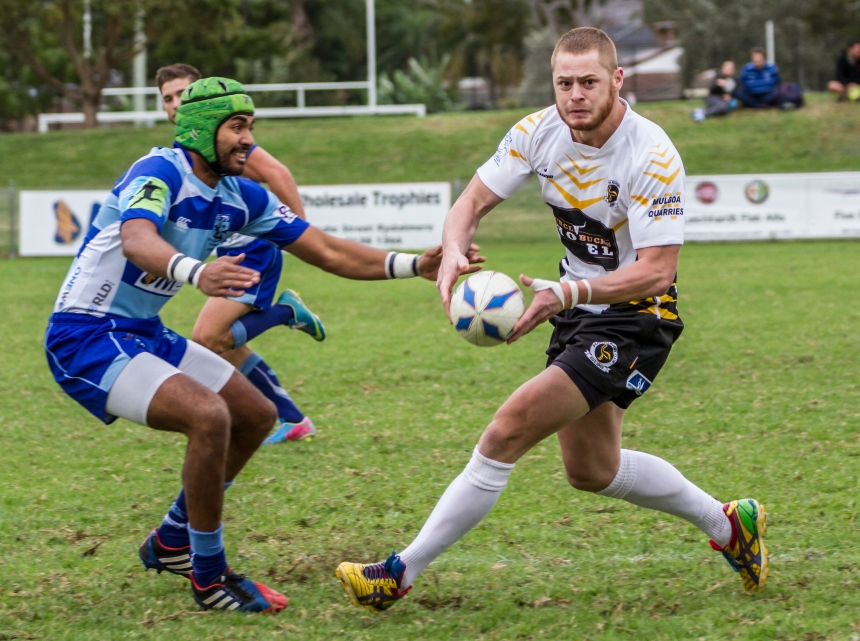 It was the Emus who got the scoreboard ticking over first, a penalty from Michael Mate just reward for a positive start and some patient, disciplined phase play. However, and this is a theme throughout, they conceded virtually straight from the restart, Larry Hermens on the end of the line when the Two Blues went through the hands off a ruck.

Fullback Chris Nay, taking over kicking duties in the absence of Tom Woods, added the extras. But it was the visitors who forged ahead once more in the 12th minute, outside centre KJ Mackenzie attracting two tacklers and passing into the space for fullback Jarome McKenzie to glide through and put Wilson Silipa away to the corner.

Six minutes later they had their second, and this one had it’s genesis in the forwards. Big no.8 Tyrone Viiga made the initial bust off a quick tap before offloading to Pita Tupou, who in turn fed rampaging loosehead Daniel Arona to the chalk. Michael Mate converted one of the two scores and the Emus had the edge at 15-7.

What Penrith have to do is arrest their propensity to concede in the immediate aftermath of scoring. This side has no problem bagging points – they average just over 26 per game – but it is defence that is costing them that breakthrough win. This time it was a silly penalty, no arms in the tackle from Robert Mate, and Nay reduced the arrears to 15-10.

But back came the ‘Riff’, another quick tap as Parra’s discipline continued to cost them and captain Ethan Robinson-Mate barrelled his way over after a neat little step.

In danger of being blown away before they’d thrown a decent punch, Parra regrouped on the half hour and showed their growing maturity and patience as a side. Building phases with precision, they stretched the suspect Emu defence to eventually work a hole for Lani Tiatia to make a dash for the line. Then, three minutes before the break, came a moment of controversy – as far as Penrith were concerned at least. 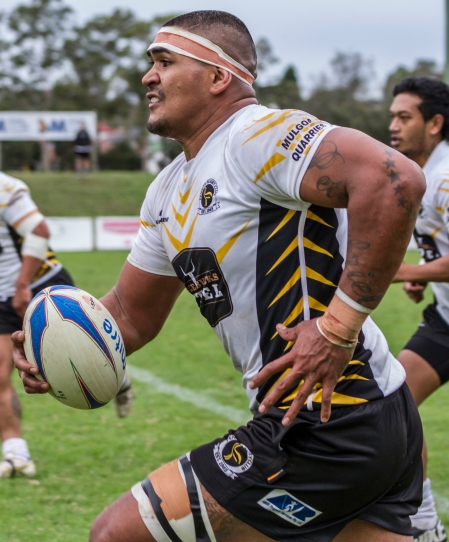 Tyrone Viiga on the charge for the Emus – Photo: Pat Dunne

Parra took a five-metre lineout and set up a driving maul but their opponents didn’t contest, instead putting up a chorus of ‘truck’n’trailer Sir!’ cries and waiting for the referee’s whistle. However, Nathan Pearce waved Parra on, and by the time Penrith realised that he wasn’t going to budge, they couldn’t reset in time to stop Two Blues’ skipper Cox being driven over.

Coach Tuipulotu was convinced it was an illegal score. “The try should not have been awarded as we didn’t contest the rolling maul,” he explained. “When you don’t contest or don’t touch the rolling maul from the lineout, the ball gets transferred to the back and this becomes truck’n’trailer.”

His opposite number Fasavalu meanwhile, was happy to leave it to the officials. “As far as I’m concerned, there was nothing illegal about the maul and set up of it. That said, everyone is entitled to their opinion and interpretation. But at the end of the day, it’s only the ref’s decision that matters.”

The try-scorer himself played a straight bat. “To be honest I was at the back of the maul, so I couldn’t tell you if the front of the maul bound with the defensive line. But I’m not sure if Penrith will persist with that ploy too much longer as it is risky,” observed Cox coyly.

All debates aside, the try stood and the teams went to the sheds only two points apart, the Emus up 22-20. But a yellow card before the bell to the influential Viiga left the visitors up against it after the break.

Parra profited immediately from their new found advantage after the restart, and it was a case of déjà vu as captain Cox scored off a driving maul from another five-metre lineout. There were no question marks this time around but their lead was short-lived.

With Viiga back in tow, the visitors grabbed what looked to be a potentially match-winning double before the hour. Michael Mate grabbed the first after some neat hands down the line, before Robinson-Mate showed some pace to break free and feed KJ Mackenzie around to the posts. 34-25 with 20 minutes to go – surely it was Penrith’s to lose now?

The pendulum swung back to the hosts in the 64th minute, Parra getting piggy-backed upfield through penalties. And when a succession of pick and drives wore down the visitors’ goal line defence, Cox was on hand to pick out a basketball pass over the heads for Sakaria Noa to cross for his fourth meat pie of the season. 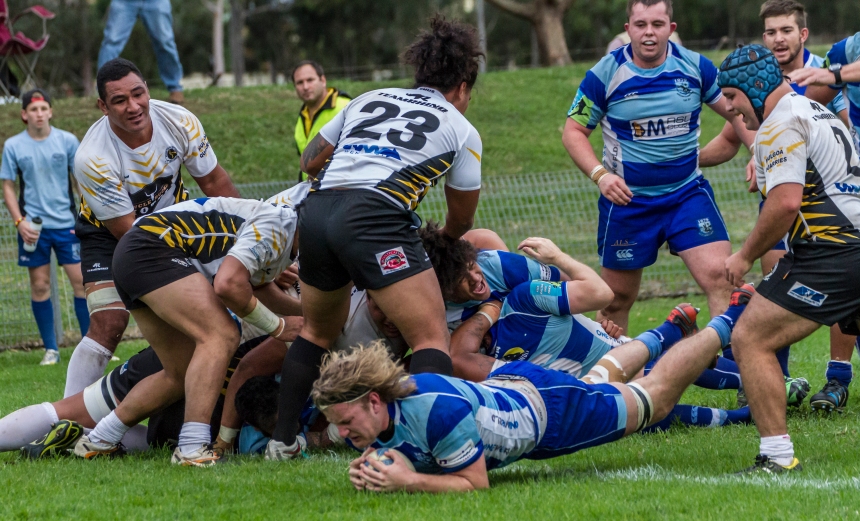 The score marked a change in momentum as Parra went into the closing stages with perhaps the greater sense of confidence and belief that they could get the job done, something this Penrith side are yet to experience. And with only a minute left on the clock, that positive mentality paid off.

As the Two Blues set up their umpteenth rolling maul, the Emus looked to have brought the drive to a halt. But with a melee of bodies from both sides collapsing all around him, lock Evan Olmstead scooped up the pill and dived for the open grass to make his first ever try for the Two Blues a match-winner.

Chris Nay sealed the 3pt victory with the conversion, leaving the Two Blues to wildly celebrate their third win of an increasingly promising season. However, coach Fasavalu issued a word of warning ahead of next week’s meeting with Eastwood.

“It was good to see both sides expressing a positive attacking mind set. But at the same time, it highlighted areas we need to address and fix before next weekend,” he said. “Tries win you games, defence wins you championships.”

Penrith meanwhile, must go back and do it all over again next Saturday against Easts, only this time even better. “We just have to be mentally prepared and positive that we can go the extra mile, and it’s only a matter of time,” believes Tuipulotu.

Hell hath no fury like an Emu spurned. Easts beware.

“It’s obviously disappointing to let ourselves get into that situation, but full credit to Penrith who put us in that position. The worst part was the nature of how we let the tries in, I counted three of them as being the softest we’d let in all year. It’s definitely an area we have to improve on for next week against Eastwood.

“We know every year it’s a tough game and always close, and it’s a big ask for the younger boys to get the win against a Penrith team ready to secure their first victory. They were very big and skilful. When given space they run hard and create things from nothing, and it was no fluke they had us by nine points with 10 minutes to go. I can see them knocking a number of teams off this year and they are definitely not to be taken lightly.

“Our lineout and rolling maul was probably the difference in the end with three tries coming from it. I spoke to the ref at half-time and we adapted extremely well to their ploy and actually scored two more tries later in the game from the same tactic.

“After a close few losses we knew we had to string a few together to stay with the top six. The mood with the boys is strong, and close wins generally do that. But we are not getting carried away whatsoever as the next four rounds will play a huge part on the bearing of our season. Eastwood will be tough, however we will be confident leading into the game.”

“Experience does play a factor but in saying this, we have suffered a lot, and now it’s time for the suffering that we have endured to stand up and be counted for. No one wants to lose, so hopefully the players now believe in their ability and talent to get that elusive win.”

Original version published by Rugby News on May 6th, 2014