A dogged Eastwood confirmed their return to form last weekend, while putting another dent in the title defence of reigning Premiers Northern Suburbs, with a hard-fought 21-20 win on the bell at North Sydney Oval.

A cagey match that saw precious little excitement for the first hour as defences dominated, broke open in the final quarter with the lead changing hands several times before Norths pivot Angus Sinclair struck what appeared to be a decisive 3pt blow with three minutes remaining. But the Shoremen couldn’t see out time from the restart, coughed up a penalty, and up stepped Woodies centre Tom Hill to dissect the uprights and secure a vital win that saw them leapfrog Norths into second place on the ladder.

Three penalties in the opening three minutes had seen the home side pinned inside their own 22 as Eastwood looked to strike early. But for two sides with title ambitions, the opening exchanges weren’t ones to file away for the season’s end highlights reel, with a litany of handling errors cruelling any potential attacking raids.

Indeed, Norths were barely out of their own half in the first 15mins, but the Woodies were struggling to forge any real opening. Halves combo Matt Gonzalez and greenhorn Jackson Bird – starting only his fourth Shute Shield match – did their best to probe for any chinks in the home side’s armour. But the red and black wall held firm, with prop Ezra Luxton a raging bull at the breakdown, and inside centre Harry Burey getting through a succession of big hits on much bigger opponents.

The deadlock was broken off the back of more good work from Burey, a measured touch-finder at the start of the second quarter finally getting his team into a threatening position. And when Eastwood were pinged for playing the ball on the floor, captain Angus Sinclair stepped up to wake the scoreboard operators from their slumber.

As the game ticked over the half hour mark, a stalemate, played out for the most part in the middle third of the field, took hold. Norths were improving in possession, but as against Manly a fortnight earlier, there was plenty of side-to-side play with precious little go-forward. When they lost the ball however, their defence appeared to be a tough nut to crack, but the Woodies weren’t helping themselves by giving away needless penalties in positions of attacking promise.

When the drought-breaker arrived on 33 minutes, it was perhaps no surprise that it came from an error, rather than any pristinely executed attacking play. What was a surprise was that it came from the normally reliable hands of Angus Sinclair, who fired a pass to the flank on halfway, only to see it picked off by the anticipation of Tom Hill, who plucked it from the air and gleefully ran home to put the visitors in front. 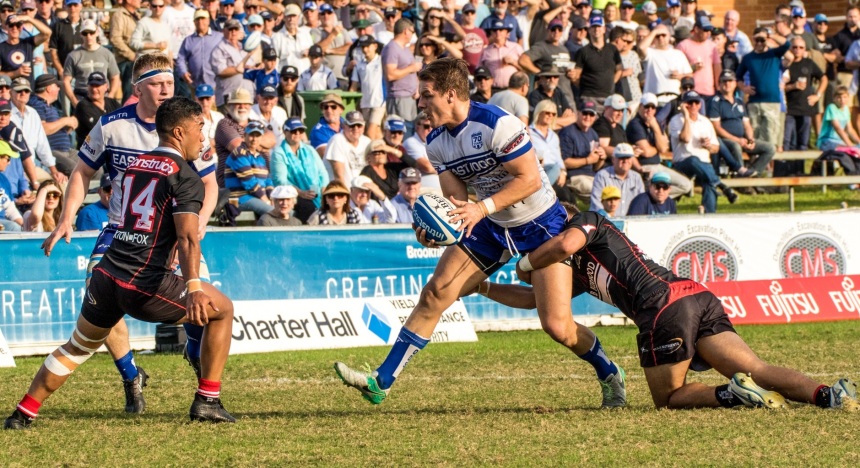 Tom Hill continued his fine form with ball in hand and off the boot – Photo: Serge Gonzalez

The burly centre – entrusted with kicking duties following the long-term absence of Jai Ayoub – couldn’t convert his good work. But his try was the shot across the bow that his side needed to give them something to show for their first half toil, and the missed kick would prove to be his only aberration off the boot. But more of that later.

The favour was almost returned on the siren. Jackson Bird floating an inviting pass straight into the path of opposition winger Richard Woolf. But, maybe with one eye on the lurking Jed Gillespie, the speedster let it slip from his grasp and the loose ball was sent into touch to signal a temporary end to hostilities.

The Shoremen were gifted an opportunity to make some inroads into the Eastwood red zone after the restart, when Hugh Roach was shown yellow in the 44th minute for not retreating 10 metres after a penalty. Another subsequent infringement gave Norths the option of a fairly routine three points. But they sought greater reward from their man advantage and kicked to touch, only to see some stout Eastwood defence and a sloppy pass from Sinclair, allow the ball to float across the sideline and out of Lochie Creagh’s hands, when the winger had a potential overlap.

Indeed, it took almost the full 10 minutes for Norths to make good on their numerical advantage, and while halfback Josh Noonan showed terrific instinct and initiative to dart down the short side with no-one home, the Woodies will be remonstrating the fact that he was afforded such an opportunity in the first place.

A kicking contest ensued for the next five minutes with neither side willing to chance their arm too much with the game in the balance, preferring to probe each other’s back field in the hope of an individual error instead. And it was the Premiers who blinked first, coughing up a penalty just outside their 10 metre line, but directly in front, and Hill duly obliged. 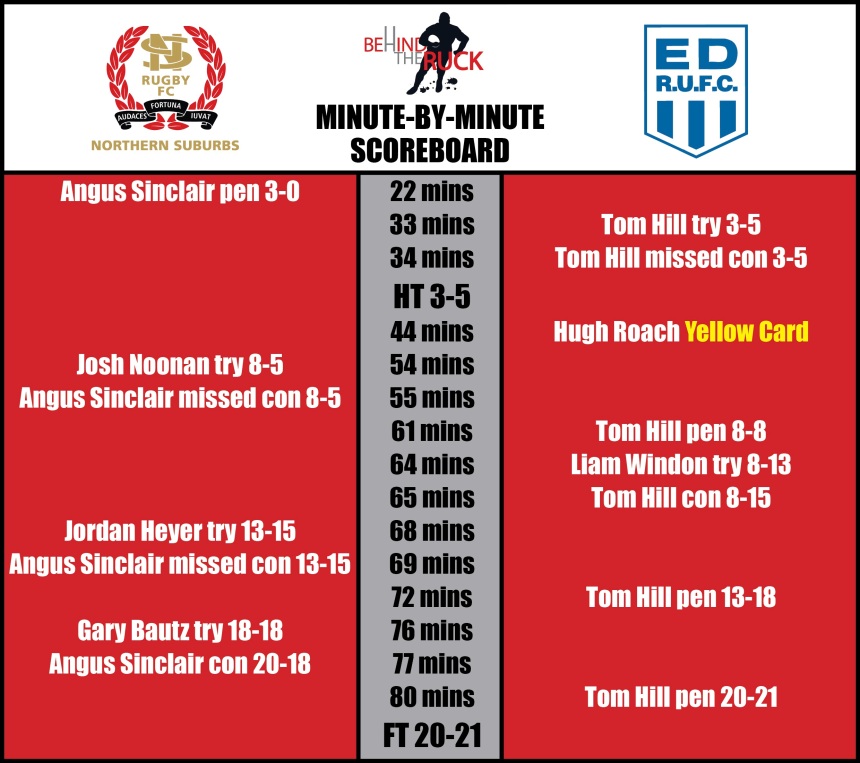 Eight-all as they entered the final quarter then, and it was only at this point that, perhaps due to the toll taken by their respective defensive exertions in the previous hour, the game finally opened up and forged some semblance of enticing rhythm.

Two penalties in succession had Eastwood deep in enemy territory on 64 minutes, and playing the advantage after a potent looking rolling maul was illegally stalled, Jackson Bird spotted the opportunity to catch Norths cold. Demanding the ball from his halves partner Gonzalez, the 22-year-old put up an inch-perfect crossfield kick for Sione Ala to tap back infield, and fullback Liam Windon was on hand to run in his ninth try of the season.

Stung into action, the home side regrouped from the restart and put together their most incisive passage of attacking play thus far. A James Brown charge down was the catalyst, turning over possession and pinning Eastwood back inside their 22, before surges from Creagh, the ever-willing Luxton (twice) and finally Sinclair, opened the door for Jordan Heyer to brush off a soft tackle and dive for the line.

Sinclair’s second missed conversion kept the Woodies in front by a whisker. But a high-shot on prop Rob Lagudi from the visitor’s next foray upfield allowed Tom Hill to establish a five-point lead at 18-13, with now only eight minutes remaining.

However, the Woodies’ discipline suddenly deserted them, and after they’d conceded a scrum penalty and failed to roll away from the next ruck, Norths kicked to touch in search of the decisive blow. Borrowing from the French in the 2011 World Cup Final (and numerous others since no doubt), they concocted a lineout play that saw the ball sent to the tail for Connor Vest to dab back for a rampaging Luxton to tear through the hole created in the middle of the line, and when the hardworking loosehead was felled just short, Gary Bautz was there in support to burrow over. 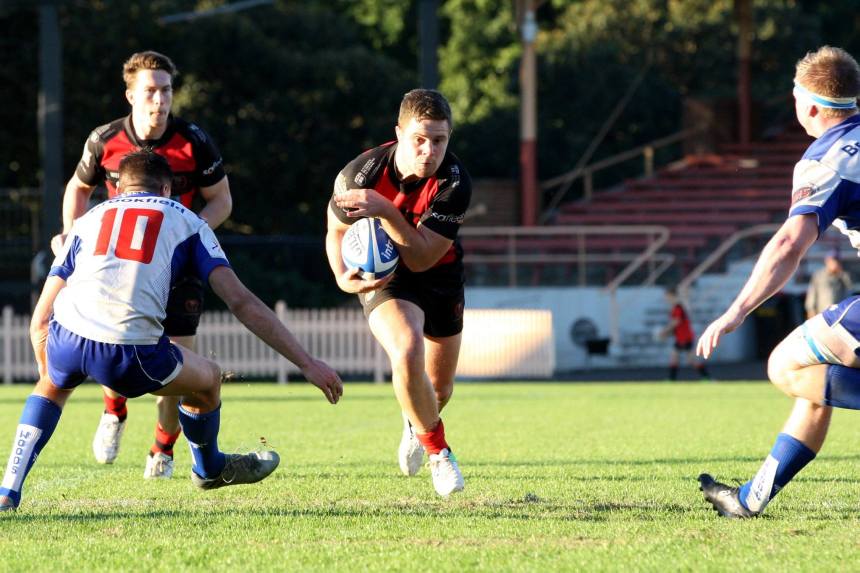 Harry Burey was a standout for Norths at inside centre – Photo: Clay Cross / SPORTSPICS

Despite his previous wobbles, Sinclair rarely lets his team down when the pressure is truly on. And so it proved again, an ice-cool swish of the right boot saw the ball cross the black dot, and the North Sydney Oval faithful whoop and holler in anticipation of a narrow victory.

But it was at this point that maybe, just maybe, the absences of Will Miller, Hugh Sinclair and Nick Palmer were most keenly felt in terms of on-field leadership and experience. Faced with the option of protecting possession inside their own half for a full two minutes, or playing it at the other end of the field and forcing Eastwood to try and go 80 metres to win it, they opted for the former.

That plan worked well for seven phases but you always felt that they were playing with fire, and when referee Michael Hogan pinged openside Taylor Francis for going off his feet, you could almost hear the groan all the way from Tbilisi, Georgia, where Norths head coach Simon Cron was preparing his Australian troops for the World Rugby Under 20 Championship.

It was perhaps appropriate that Tom Hill got the chance to claim the spoils for his side given his impact on the previous 79 minutes. The perfect crash-ball exponent, the number of his positive carries allied to a high tackle count, were just what the Woodies had needed.

But having fallen short in exactly the same situation a fortnight ago against Randwick at Coogee Oval, from admittedly further out, the pressure was on for him to seize the day this time out.

A huge win for Eastwood then, who have bounced back admirably from their wobbles a month ago. But a third defeat in a row for Norths will be a bitter pill to swallow. The champions are by no means crumbling, but there are definitely some cracks appearing in the foundations that need addressing, and soon.