It wasn’t the result the Australian TV audience, or the majority of those in attendance at Allianz Stadium were hoping for. But on a day when the memory of young Warringah player Lachlan Ward was appropriately honoured, a life cut tragically short whilst playing the game he loved last weekend, it was perhaps fitting that the spoils went to a side led by one of the Rats’ finest former servants.

Incoming Scotland head coach Gregor Townsend turned out for the northern beaches-based Shute Shield club back in the mid-1990’s, and given this was a result engineered by a team still adjusting to the new man at the helm in only his second game in charge, and by a squad missing at least four of their star men through injury and British & Irish Lions commitments, it was all the more impressive.

Behind for only five minutes of the clash, the visitors led 17-12 at the break and produced the try of the day just after the hour to restore the advantage they had surrendered after Will Genia went over from in close in the 56th minute. But a seismic defensive effort, across the park and at the maul in particular, saw them gain some revenge for the one-point losses suffered in their last two meetings with the Wallabies. It was also their second successive win on Australian soil following the 9-8 victory at a rain-soaked Newcastle back in 2012.

The tone for a tough afternoon at the breakdown for the home side was set in the opening couple of minutes, Scott Higginbotham pinned under a blue blanket and pinged for holding on, and Scottish fullback Greig Tonks opening the scoring with a long-range penalty. A silly indiscretion from the restart gave Bernard Foley the chance for an instant response, only for the normally reliable sharpshooter to slice his attempt well wide of the uprights.

Reprieved, Scotland set about implementing their gameplan, the halves combo of Ali Price and Finn Russell keen to play at pace and stretch the Wallabies across the park in attack, while linespeed and pressure was the order of the day when Australia had the ball, shutting down their time and options.

That pressure paid off handsomely in the 14th minute when the visitors claimed the first five-pointer of the afternoon, but the Wallabies were the architects of their own downfall. A shocking pass from the back of the ruck by Will Genia, fell in front of Allan Ala’alatoa and forced Tatafu Polota-Nau to scoop up and try to feed it back to the gold jerseys behind him. But what the hooker didn’t see as he passed off the floor was the instinctive run of Scottish centre Duncan Taylor, who pilfered the lofted pill and raced away with no-one home.

Three penalties in quick succession put the Wallabies in a position to respond, and it was man-of-the-moment Israel Folau who obliged. The forwards laid the platform with a lineout maul sucking in Scottish defenders, and when Genia headed infield for Foley, the flyhalf’s raking pass over the top found a giant hole for Folau to run into and back up his double from last week against Fiji, with his 23rd try in green and gold in just his 54th test.

Foley’s radar was recalibrated for a successful conversion, but the star pivot left his team mates under the pump a few minutes later, when a blatant body check on the dangerous Russell earned a 10 minute stint in the naughty chair. And it didn’t take long for Scotland to punish the ill-advised indiscretion but once again, it was a gift from their hosts.

A tidy lineout play almost brought some reward down the blindside but the Wallabies scrambled well and when the ball came infield, they forced a knock on and a 10 metre scrum. But instead of holding firm and exiting without fuss, Genia, as he did last week against Fiji, was caught taking too long to put boot to ball by Russell, who charged it down, regathered and ran around far enough to give himself an easy conversion for a surprise 17-7 lead.

Captain marvel Michael Hooper was doing his best to get his misfiring troops back in the game, a sneaky break from the back of a maul in the 28th minute a highlight, as he carried 40 metres upfield and over halfway. But by the time he was taken to ground, six Scottish jerseys had tracked back from the same ruck to cover, while Hooper could only count on Scott Higginbotham for support, and was unsurprisingly guilty of holding on as a result.

It was Hooper to the rescue four minutes before the break as the Wallabies almost shot themselves in the foot once more. A misplaced pass from Karmichael Hunt was picked off the deck by Scottish hooker Fraser Brown, who pinned back the ears and got the legs pumping. Thankfully Hooper was the man chasing him down, and there aren’t many wingers in world rugby who can outrun the pacy flanker, let alone any members of the front rowers union.

A yellow card for Ryan Wilson for repeat infringements then gave the Wallabies a lifeline, and it was their turn to profit from the numerical advantage with immediate effect. They almost forged a pushover try from a scrum, but when the ball was sent back for the waiting Foley, it was no surprise to see the crossfield kick to a soaring Folau, and you rarely stop the best leap in the world game from that position. Foley couldn’t add the extras, and it was still the Scots who went to the sheds the happier, 17-12 in front. 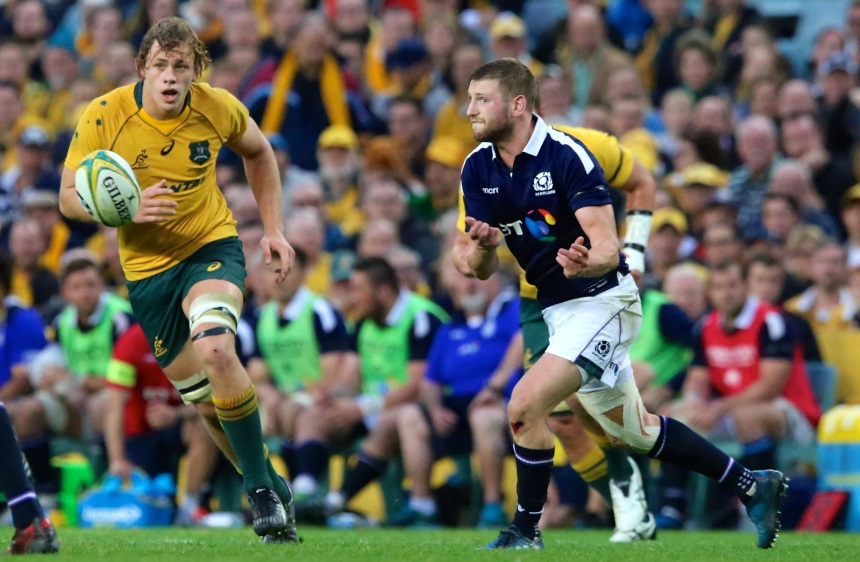 It was a largely uneventful opening to the second half, restricted to sporadic moments of attack, and the continuing ebb and flow at the breakdown conducted by Wayne Barnes’ whistle. Finn Russell was still calling all the shots for the Scots, a player who can consider himself unlucky not to have been lining up for the British & Irish Lions against the Maori All Blacks instead, given he was the form flyhalf in the Six Nations earlier this year.

But when the next score did come on 56 minutes, it was the home side who claimed it, and it was some payback for his earlier mishaps from Will Genia. The Wallabies finally put together some multiple phases to test the Scottish line, and after hammering away through a couple of damaging surges from replacement Rory Arnold, it was the alert Genia who pounced from a metre to level the scores. Foley’s conversion was good, and the men in gold were in front for the first time in the match.

However, just at the point where Scotland would once have lost a bit of heart and started to fall away, they showed what an improved mental edge they have fostered, and just what a quality attacking side they are these days, with the legacy of previous coach Vern Cotter further embellished by Townsend’s ball-in-hand mantra.

From a lineout on their own 22 they passed their way superbly upfield using only five phases, and when a double-pump from Russell bamboozled the Wallaby line and sent the ball wide, two gold jerseys took out each other whilst trying to tackle Greig Tonks, who fed inside for Duncan Taylor to drew the last man and put Hamish Watson over for a third try for the visitors.

Captain marvel: Michael Hooper gave his all in what was another stellar performance in defeat in 2017 – Photo: AJF Photography

From thereon in, it was a case of persistent but largely benign and error-ridden Australian attack, versus stubborn and heroic Scottish defence. Foley kicked out on the full searching for an anonymous Dane Haylett-Petty, while Genia kicked the ball lamely back into Scottish hands with numbers on his outside – much to the derision of the Wallaby faithful – before a terrific last-ditch tackle from Russell prevented Folau from claiming his hat-trick.

Two misplaced passes inside a minute from first Folau, then Tevita Kuridrani, both missing their intended target of replacement Reece Hodge and finding the touchline instead, further incensed the home crowd as the clock began to run down on their chances of witnessing a rescue mission. Kickable penalties were also sent into the stands instead, only for a misfiring lineout or superb maul defence from the Scots, to cruel any Australian progress.

Three turnover penalties in the closing minutes proved to be the end of the Wallaby’s ambitions. Even a last gasp opportunity from another lineout couldn’t be taken, Kuridrani then Hooper carrying hard into the opposition 22, only for Scotland to pile bodies into the contact zone and win the penalty that ensured that second successive win on Australian soil, and a rise up the world rankings to fourth for good measure.

The Wallabies must lick their wounds and go again against Italy next weekend. But with only that match and two further clashes with South Africa and Argentina to come before they face trans-Tasman rivals New Zealand again for a shot at the elusive Bledisloe Cup, coach Michael Cheika knows that his side need to improve several levels, and fast.