It was a game played out in three dominant periods, the visitor’s starting like a house on fire to open up a 10-0 lead, before the Force came back with a vengeance with 30 unanswered points to take control.

But with their season on the line, Queensland found another gear when they needed it, and thanks to the try-scoring efforts of Alysia Lefau-Fakaosilea and Sammie Treherne – who both bagged hat-tricks – they had just about enough to ensure a showdown with their interstate rivals on April 21st.

It was the visitor’s who set their stall out early, crossing with barely two minutes on the clock after laying siege to the Force 22. A loose carry just metres from the line looked to have cruelled their attempts to strike the first blow, but the clearing kick from Tui Cope was fielded and returned with interest by Reds fullback Treherne, who carried hard and fired a pass wide for centre Lefau-Fakaosilea to run in with the minimum of fuss.

They grabbed another just four minutes later, a terrific passage of play from a scrum inside their own half seeing the ball flow through the hands of Lavinia Gould, Kirby Sefo, Treherne, Lori Cramer and back to Gould, who charged inside the red zone and offloaded to the supporting Treherne for a terrific score.

No doubt shocked by the inauspicious opening, the Force regrouped well from the restart to build their first period of pressure, and it was only some scramble defence and a couple of bell-ringing hits from the Queenslanders that held the home side at bay. But their persistence paid off, and after forcing a couple of penalties within range, they opted to get on the board in the 14th minute through the boot of Cope for 10-3.

Warming to the task, the home side continued to pepper the Reds defence, pinning them in their own half with a barrage of kicks from Cope and flyhalf Trilleen Pomare, and getting some reward in terms of ill discipline and sloppy play in possession from a ruffled opposition.

The pressure finally told on 26 minutes, the Force working infield off a lineout and blindside Taylor Waterson scooping up to plough a furrow straight through the middle and under the posts, as the Reds questioned a knock-on. Cope’s conversion levelled the scoreboard and as the game ticked towards the half hour mark, that early Queensland dominance had become a distant memory.

The ever-dangerous Treherne looked like she might be about to get her side back on top with a powerful run from her own half that left a trail of Force jerseys in her wake. But her opposite number Madeline Putz possesses her own set of impressive wheels, and did superbly well to reel in Treherne, spin her in the tackle, and drag her over the sideline.

A further indiscretion by the visitor’s from Lori Cramer as she tried to contain the effervescent Courtney Hodder, was one too many for referee Graham Cooper, with the winger sent to the bin. And they were a tad lucky not to go down to 13 just moments later after three more penalties tested his patience. But this time a warning was deemed sufficient, and sharpshooter Cope edged the Force in front 13-10 at the break.

Returning for the second stanza with seven minutes remaining to take further advantage of the extra player, the Force duly kicked things up a notch to claim a wonderful team try. The influential Cope was the catalyst, dinking a little left footer over the Reds line for Hodder, who showed exactly why she is one of the hottest properties in the women’s game with a textbook take, before putting on the gas to tear up the touchline and put the supporting Pomare away on her inside.

Finesse made way for brute strength in the 47th minute, Hodder pouncing on a loose carry from Lefau-Fakaosilea to power towards the Queensland 22, and when the cavalry arrived to help out, pick and drives were the order of the day before loosehead Darryl Wickliffe drove over.

It was all Western Force now, the Perth crowd playing their part as they recognised the sterling on-field effort from their charges, and backed them accordingly. And it wasn’t long before they were celebrating yet another five-pointer by their rampant heroines.

A missed touch from a penalty looked to have given the Reds an easy exit but they were guilty of overplaying their hand, and when a seismic hit from Vesinia Tuafa caused replacement Zahara Temara to cough up possession, the home side pounced. The forwards trucked it up the middle, outside centre Huia Swannell swerved her way within metres of the line, and rangy scrumhalf Kendra Fell finished it all off with a step, swivel of the hips and dive for the chalk.

Staring down the barrel at 30 unanswered points, the Reds could see their grand final chances in danger of being swept away by a Force side who still had one more fixture up their sleeve. And it was only when things didn’t seem like they could get any worse, and after coach Michael Hayes had made a raft of changes, that they finally woke from their slumber and rediscovered their scoring touch.

Getting some much-needed front-foot ball on the hour, the forwards sucked in defenders before three passes went wide and hands were enough to release Lefau-Fakaosilea to the corner for her second of the afternoon. And when they went 100 metres from a tap penalty in their own 22 for Treherne to streak away for another after some slick catch and pass, it was game on once again at 30-20. 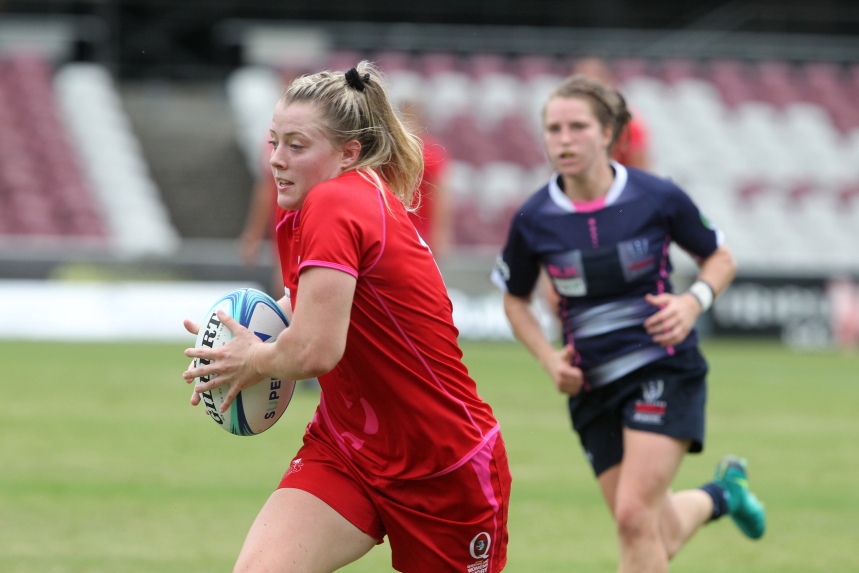 Things continued to go against the home side when fullback Putz left the field on a stretcher, and the tide had well and truly turned when the Reds opened up a tiring defence in the 67th minute for Treherne to rack up the run metres again, with a storming sprint straight through the middle for her hat-trick.

Tamara took over the kicking duties from the misfiring Lavinia Gould, and landed Queensland’s first extras of the day to make it a three-point ball game with 10 minutes to play. But the hosts were now looking like a spent Force, and with the bit firmly between their teeth, the visitor’s laid siege to their opponent’s half in search of the match-winner.

They should have claimed it in the 76th minute, only for the unfortunate Gould to throw a forward pass to Ivania Wong with nobody home. But when no.8 Alexandra Hargreaves effected a turnover at the ruck and the Reds shifted it to the opposite flank, the lethal finishing skills of Lefau-Fakaosilea were on hand to save the day, the 17-year-old standing up Hodder and burning her way on the outside to find the corner and send her team off to the big dance.