Fast-finishing Marlins start with a bang

Manly started their Intrust Super Shute Shield season with a bang last weekend with a 32-13 victory at Eastwood, despite trailing 13-7 just after half-time.

An encounter that ebbed and flowed for three-quarters of the match was eventually run away with by the visitor’s, as their attack finally clicked against a Woodies side that ran out of puff on a searingly hot opening day of the club rugby calendar.

Flyhalf Nic Holton notched up two tries and 19pts as the Marlins racked up 25 unanswered points in the second half. But both teams will have come away knowing that they have plenty to work on if they are to be firmly in the mix come finals time.

The season was barely a minute old before returning scrumhalf Mick Snowden claimed the first try of the contest. An initial box kick to clear from inside his own half didn’t get the required distance and promptly ended back in the no.9’s arms, but when a second attempt was right on the money, and the bounce of a rugby ball took it away from Manly fullback Josh Turner and into the hands of Woodies’ winger Zac Mackay, Snowden was on hand to take the tidy offload and race away to the corner.

It took some feisty scramble defence to prevent the powerful Denis Pili-Gaitau from claiming an immediate riposte for the visitor’s, after good work from his centre partner Kevin Fuavao. And when play was shifted wide and Harry Bergelin took it to the line, quite how Adrian Hall and Turner conspired to lose the ball forward with one pass needed and the line begging, is perhaps something only they can answer.

Both sides had their fair share of spilt pill and turnovers in the exchanges that followed, as the pre-season cobwebs began their slow dissipation. But it was the home side that struck again on the quarter hour, Snowden adding another three from in front when the Marlins were pinged for not releasing.

Chances were at a premium for the next 10 minutes as the game hit a stalemate, Ayoub probing for territory off the boot and a chance to get his big pack of forwards in position, and Manly using plenty of direct running to try and bend the line and work some space on the fringes.

With defences largely on top in the opening quarter, the Marlins’ first five-pointer of the day was surprisingly straightforward when it came. The industrious Pili-Gaitau hit it up on the 10 metre line and found a hole between two Eastwood tacklers, burst through it and kept the legs pumping before feeding flyhalf Nic Holton off his right shoulder and under the posts.

The rangy South African – stepping permanently into the departed shoes of Sam Lane after deputising for his good friend on occasion over the last two seasons – added the extras with minimal fuss, and a one-point margin seemed about fair given both sides’ relevant efforts thus far.

A spilt bomb from new Woodies recruit Pama Fou soon had the Marlins back on the attack, and a quick tap before sending it down the line for powerful no.8 Brad Hemopo to build up a head of steam eventually brought a penalty. But the resultant driving maul off the lineout option was soon turned over by some desperate Eastwood defence.

The tide was slowly turning in favour of the visitor’s, and despite both sides’ inability to put together multiple phases, and some typical ’round one’ handling errors that rendered the remainder of the first half as an unspectacular spectacle, it was Manly who ended it looking the more likely when they did get ball in hand.

However, when they returned for the second stanza it was the home side who claimed the next score to edge themselves further in front, but boy, did they make hard work of it.

Burly inside centre Blake Sutton made the first inroads, stepping Harry Bergelin and brushing off Sam Shires to put hooker Ed Craig firmly over the gain line. But when the ball was shifted back inside, two involvements from Ayoub – a loose pass and a deflected kick – should have seen possession reclaimed by Manly. Somehow however, the ball made its way out to Liam Windon, who had Fabian Goodall on his outside to step and drive his big frame over the chalk. 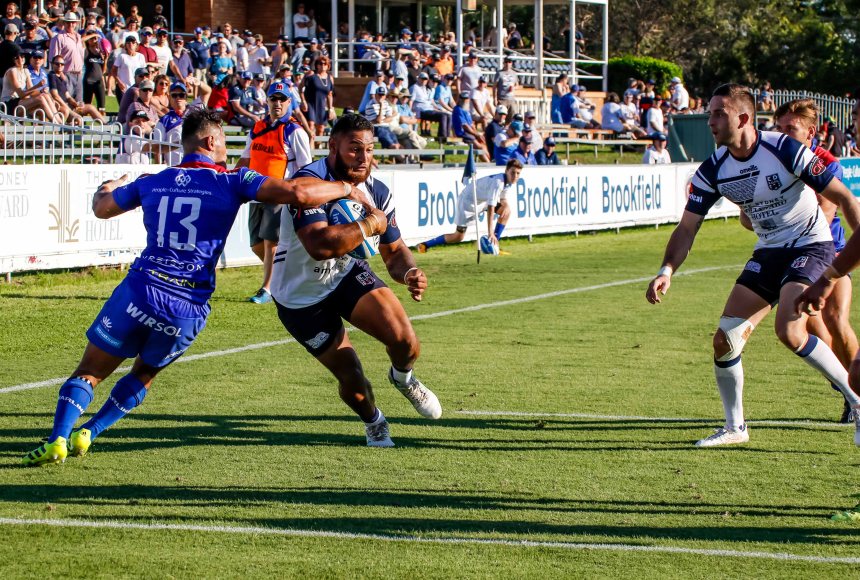 Fabian Goodall steps inside Denis Pili-Gaitau on his way to the line – Photo: Serge Gonzalez

The score sparked the Marlins back into life, and they had bagged their own second five-pointer within a couple of minutes. Winger Mick Adams was the catalyst, a searing cross-field run leaving a trail of Woodies in his wake. And when the ball came back for the hardworking Shires to punch a hole in the Eastwood line and find Holton in support, the flyhalf only had an off-balance Mick Snowden between himself and the posts to claim his brace.

The conversion of his own good work put the visitor’s in front for the first time in the match, and Holton’s one-man assault on the scoreboard continued shortly after when the Eastwood rearguard made a hash of fielding a box kick from Tim Donlan and conceded a needless penalty. Eastwood 13 Nick Holton 17.

With the shackles coming off and confidence coursing through their veins, Manly took a game that had been very much in the balance, firmly by the throat and kicked away.

Denis Pili-Gaitau had been a handful every time he touched the ball, and another couple of damaging surges paved the way for the Marlins’ third on 55 minutes. When his second incursion sucked in four defenders and the ball popped up for Donlan, it was simply a question of ‘through the hands’ from skipper Hall to Shires, and onto Holton, whose final pass wide was gleefully finished off by the predatory Josh Turner.

The fleet-footed fullback was in again just after the hour, only for the try to be chalked off for an errant boot in touch from Alex Northam in the build up. But the pressure was beginning to tell as Eastwood started to fade in the April sun. 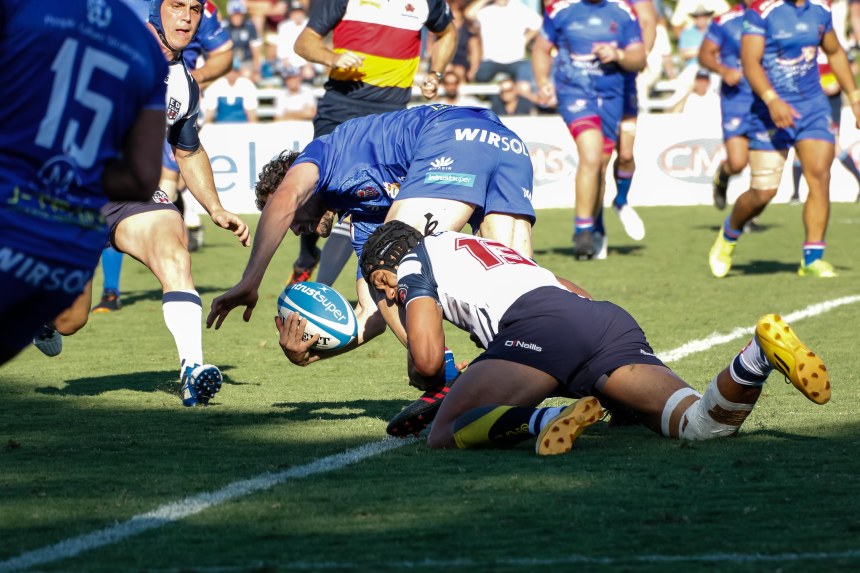 Holton had to content himself with a 19pt haul as coach Brian Melrose rang the changes. But there was no let-up in sight for the hosts, replacement pivot Luke Makris arriving in time to punish an offside penalty with another three points for 27-13.

Despite having their backs to wall, a score for Eastwood at that point may still have brought a grandstand finish. But their trips to the opposition 22 were now few and far between, and a lost lineout, a knock-on, and the accurate clearing boot of Donlan, combined to frustrate their efforts.

And it was game, set and match in the 74th minute. Desparate to concoct something from nothing, Rhys Allen’s offload off the deck was intercepted by an alert Alex Northam on halfway. The winger fed inside to his captain Hall, who put up a delightful one-handed reverse pass for Kevin Fuavao to pluck from the air, and race down the touchline to rubber stamp the victory.

The final scoreline was a touch harsh on a Woodies side that more than matched their opponents for almost an hour. But with the likes of Ayoub, Snowden and Allen only just returning to the fray after long-term absences from the TG Millner fold, there is more than enough talent in this team to see them knit things together over the next few months.

For Manly, they will doubtless say that there is plenty to work on and still an awfully long way to go. But 30-plus points at the home ground of one of your title rivals is not to be sniffed at, be that round one or round 18.