An opening day win over the highly-fancied West Harbour caused more than a few eyebrows to raise in the direction of Woollahra Oval in round one of the 2018 Intrust Super Shute Shield. So a full-time score of 52-0 over Gordon at Chatswood Oval last weekend won’t exactly have dampened the new-found enthusiasm building around Eastern Suburbs.

Up 21-0 at the break, the Beasts kicked on in style in the second half to finish with a seven-try haul and record the rarity of a donut in the points conceded column, with NSW Waratahs pivot Mack Mason bagging a 22pt haul. But while things are looking up for Easts, two defeats and 100pts at the wrong end of the field is not the start to the new year the Highlanders were hoping for. Behind the Ruck spoke to both sides at full-time…

“That performance is nothing to do with me, it’s the guys that have been here for a while now. Mack [Mason] is in his second year, A.K. [Archie King] who was on the bench today, he’s been playing 1st grade for three years; Ned Yeomans is two years; Sam Fogarty is two years; Charlie Clifton played his 50th game today; Cohan Guerra has been in and out for three and a half years; Jack Grant has been two years and Ofa [Fainga’anuku] is back too. Even though we’ve changed a few coaches, the players have been the same, so that’s been the challenge to them, to not see this as a rebuilding year. Don’t look at me or this new era as something we’re going to build into, because if they are, that’s a weak option by them mentally.

“The dot in defence pleases me more, easily, because that’s an attitude thing. Attack is skill, so you recruit that, you recruit to score points. Who’s going to be my tighthead? Who’s going to be my 12? Do I need a fast winger to score tries? But the defensive side is an attitude thing, and you look at that scoreline – at 36-0 it was done – and the guys had every excuse to ease off. But all I heard was them talking about keeping them to zero, they weren’t talking about scoring tries. That happened off the back of what we were doing in defence, so that mentality that I was after is starting to shift. You’ve always got something to aim for, it should never be a case of ‘That’s sweet, we’ve won this, let’s knock off.’

“When you get a yellow card you’ve got to speak about it. Where’s our weakest area? Scrum is one, defensive lineout is another, because the guy we’ve brought on is normally a hooker, so there are challenges there. I thought if they didn’t score there, that there was enough momentum for them to get into half-time and think they could still be ok, do a couple of little things differently, pressure us down in our half and get some pay, and we spoke about that.

“I thought that was such a mature choice from Mack and Tim [Buchanan] to take the three points early in that second half rather than go for the lineout, because we’d scored our first two tries off rolling mauls. Some people might take that as a soft option at 21-0. But I think the leaders in the team had identified the pressure that we’d been under, and with a man in the bin as well, it was the smart option to take to keep the scoreboard ticking over and run the clock down at the same time.

“We now go into Randwick and Manly, so I think it was important for us to get the runs on the board the last two weeks. Not that it puts any less pressure on us, but I just think that when it comes to playing two teams that could well play finals, going in without having won a game yet makes it that bit harder. We get our confidence from being able to win games, and I think that West Harbour result was really good for us. Our attack didn’t come well, but we were able to really defend hard and win a close one. Some of the boys have said that we wouldn’t have won that in previous years, so again that is an indication of the mentality the boys are taking into games now.” 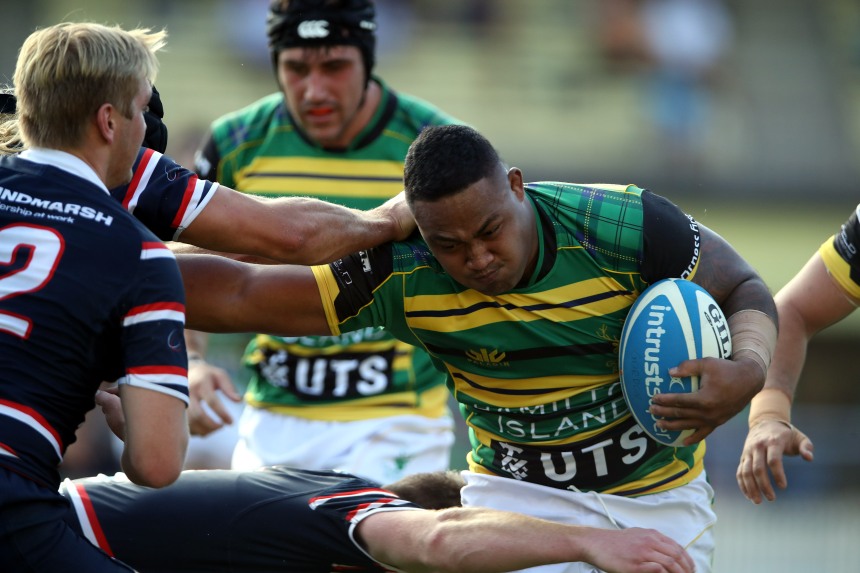 “Easts played very well and deserved to win. I think we probably let in two soft tries but other than that, they manufactured some good scores and I’ll pay them all respects for that, they were good. I’m a firm believer that you create your own luck, and it’s almost like a tipping point where we’re still going up and improving week on week. I know the scoreline doesn’t say that, but a coach sitting down analysing can see that there are improvements in there, we just need to get over that tipping point and create our own luck. Easts did that today. They played hard and they got the rub of the green, and they deserved it. I’m not begrudging them that in the slightest, they earned it.

“Our set-piece was much better than it was against Randwick, it had to be and it was. Our scrum was solid and I think we were a little bit more dominant for most of the game there, and our lineouts were far better than last week. Against Randwick our lineout was in tatters but we did a lot of work during the week and we’ve started to remedy that. It’s not the polished, finished article yet of course but it’s improving. And I thought our set-piece defence was much better, especially that last 10 minutes where Easts didn’t break our line. It’s just that third or fourth phase where one or two guys just clock off, and a good team on a good day will exploit that, as Easts did today.

“We rightly chose to have a scrum just before half-time because they had someone put in the bin. The choice to go for a lineout was a fifty/fifty but we backed our scrum, and we did the usual thing where we scrummed well, got the penalty, scrummed well and got another penalty. But then we try and play a little bit of footy and we knock it on, which is one of those coach killers but that’s the reality of it. It’s something for us to keep working on and we will. We’re determined to work hard and we’re a determined group of people.

“I think we created a lot more than last week. My count at the moment – I’ll have to go back to the footage – was seven times we were in the opposition 22 with possession and we didn’t come away with anything. So from our finishing and clinical point of view, there is a lot for us to work on there. We created but we didn’t execute those opportunities, and that’s something we’ll obviously have to sit and talk about when we clip up all the footage. It’s not doom and gloom, we’re creating it, we’re just not finishing it.

“You can’t hide from stats and you can’t hide from the scoreline. It’s not acceptable – coaches know that, players know that. What I will say is that it’s starting to change, but you can’t concede seven tries and expect to get anywhere near a win, that’s just the reality of it. So from the outside looking in, the perception probably hasn’t changed from Gordon of last year. From a spectator’s perspective watching this game today, Gordon conceded seven tries and lose by 50, and you think ‘How are they going to turn that around?’ But I am an optimist – you have to be in this game – and the group is still positive. They bounced back really well at training from last week, and I’m expecting them to do the same this week. You analyse, you review, you take what you need out of the game and try to move on and implement it next week. It’s disappointing, and we’re sore, but we can see that there is light at the end of the tunnel.”

“I’m not sure if we’ve gone better than expected. I think we came in quietly confident off the back of a really good pre-season, and it’s good to see it all come to fruition. The defence in the last two games has probably been the most pleasing thing. You rarely keep a team in the Shute Shield to nil, especially away from home, so that’s really pleasing. There’s still a lot to work on in attack because we’re probably leaving a few points out there, but the defence is something else so far, and that’s what we’ve been working hard on.

“Everyone is really clear and clued in as to what their job is, and our defence today tells a huge story. Gordon attacked us really hard, and a lot of times they were only inches out from our line, and to still be able to keep them out is an attitude thing that we’ve built. Everyone has got trust in each other, and in the man inside them. It’s early days but if we can keep that up, that’s going to be the challenge. There may be a loss around the corner, so I think getting the club going again after maybe a bad weekend will be more telling.

“It’s a really nice balance and I think we’ve got some exciting talent in the group. Ryan McAuley and Jack Digby are really coming of age in the second row, they’re both exciting young players. Codie Walker’s been exceptional, Rowan Perry has been outstanding the last two games, changing the game and saving us multiple times, and in the backline I think our centre pairing of Ned Yeomans and Sam Fogarty are really under-rated – their defence has been unreal. And on counter-attack, Nemani [Matirewa] has come in from Penrith and been exciting, and then Charlie [Clifton] and Cohan [Guerra] are guiding us around at the back, and there’s Jack [Grant] and Mack [Mason], who have built a really strong partnership. It’s all piecing together nicely, which is good.

“I think the last couple of years it has come down to the last round to decide that top six, so your for and against is obviously key, and bonus points too because it is going to be very tight. Wins at home are also going to be key. If you can win all your home games and sneak a few on the road, you’re probably giving yourself the best chance to make it in there. But to be honest, we haven’t played a top six team yet from last year, so I think that will be our true test and everyone is looking forward to that. If you want to win this comp you’ve got to beat the best, so there are exciting times ahead. There’s a lot of people proud to be Beasties, and I hope we can keep this roll going.”