World Series Rugby: Western Force back with a bang

Rugby has returned to the West in style, with the opening fixture of World Series Rugby seeing the Western Force down the Fiji Warriors 24-14 in an entertaining game in front of a packed NIB Stadium in Perth.

A fired-up home side controlled the opening 40 minutes, crossing for three tries to rack up a 19-0 lead at the break. But the Warriors weren’t there for a day out, and came roaring back in the second stanza with a couple of tries of their own, ending the game in the ascendancy but falling short of the result.

Force head coach Tim Sampson was proud of his side’s effort, and the manner in which they had played in front of the Sea of Blue.

“Right now it is just an overwhelming sense of pride and also relief,” he said. “There was such a big build up and tonight was all about the players and the fans. For the fans, the members, the supporters and everyone that loves rugby in WA, this win is for them and they deserve to see the Western Force playing here in Perth.

“Hopefully we did them proud tonight, we threw the ball around and played some really exciting attacking rugby right up until the end there, and that is what this World Series Rugby is all about.”

Some 10 months after controversially losing their Super Rugby status, the Force’s rebirth was witnessed by an impressive 19,466 passionate supporters, a number that will have most Super Rugby CEO’s looking on with envy. The big question of course is, will it last?

When the fireworks had subsided, the parachutes folded, and the last notes from Wolfmother faded from the ears, it was all down to the rugby, and there was no doubting the intent from the Force to come out and play a brand befitting the occasion, and the positivity of the new competition.

An opening 10 minutes of cohesion, desire and application was exactly what the doctor ordered, the only surprise was that it took that long for them to make good on their early promise. Playing with a penalty advantage, flyhalf Andrew Deegan fizzed a pass wide for Rod Davies, who offloaded for Marcel Brache to dive home for the first ever try in the World Series. 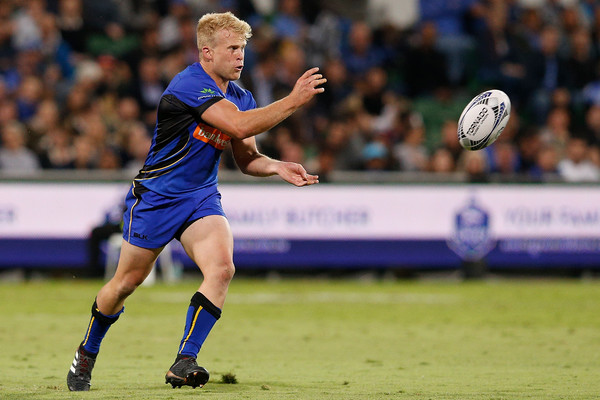 Flyhalf Andrew Deegan impressed on his return to Australian rugby

A yellow card for Fiji for no arms in the tackle soon had them straight on the backfoot, and the Force exploited it with immediate effect, Johan Bardoul diving over the ruck NFL-style to find the chalk, and Peter Grant adding the extras.

The visitors finally got some time in the opposition half with which to weave their magic. But despite some pretty impressive handling and ball retention from a side that have only spent four days together, the final killer ball to prise open a well-drilled Force defence was missing.

And having weathered the storm, the home side soon extended their lead from their next visit to the opposite end of the field. A lineout from 15 metres looked to be setting up for the maul, only for Brynard Stander to carve a path back around the traffic on the short side, and power his way over a touch too easily.

There was concern all round when Grant was then left worse for wear after slamming his head on the NIB Stadium turf as he bounced back out of a tackle. After lengthy treatment on the field, he was stretchered off in a precautionary neck brace, and the news from the sheds was thankfully positive.

The first half ended with Fiji back on attack and looking to open their account, and they may well have had a helping hand in achieving that had Rod Davies seen yellow for a deliberate knockdown, instead of the mere penalty that was deemed worthy. But another wave of ferocious charges at the line was ended by a knock-on, and the Sea of Blue cheered their boys back to the sheds with their line intact.

That particular cache lasted just four minutes after the restart. A Fijian scrum 10 metres out looked to have gone awry when the ball scooted out the back through the no.8’s legs. But scrumhalf Seru Vularika reacted quickest, superbly scooping up one-handed and scampering away down the short side to get his team on the board.

The Force were stuck in 2nd gear for a good 15 minutes, as the suddenly buoyant Warriors continued to carry the fight – West Harbour enforcer Albert Tuisue leading the way. And it wasn’t until the replacements started to enter the fray en masse for the home side, that they reignited their spark as an attacking threat.

It was another lineout on 56 minutes that was the catalyst for the score that pretty much ensured victory. But the driving maul that looked set to march over the line with consummate ease, spluttered somewhat in the final execution, with the TMO called upon to confirm a scratchy grounding from Alifeleti Kaitu’u. 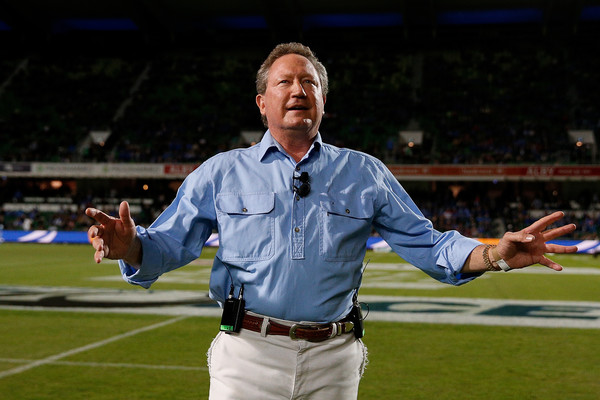 If you build it, they will come: Twiggy Forrest enjoying his very own Field of Dreams

From there, I think it would be fair to describe the final quarter as scrappy. Both sides emptied the bench, and that lack of cohesion and the pace of the game under the revised rules, appeared to imbue a litany of handling errors.

Fiji started to really throw it around as they chanced their arm with the clock ticking down. But while some of their offloading ability and support running was as mesmeric as the finest of traditional Pacific Island rugby fayre, most of it was happening too far from the Force line to cause too much consternation.

So when they did get inside the red zone, the go-to ploy in the face of a determined wall of blue became the pick-and-drive, a mantra that paid off when Mosese Voka powered over and Alivereti Veitokani converted to make it interesting at 24-14.

They thought they were in again with three minutes remaining, only for referee Jordan Way to rule a knock-on by replacement halfback Peni Matawalu, a harsh call by the look of the replays. But that proved to be the end of the fightback, Fiji running out of time and the Force sending the home faithful away happy.

It would be easy to play the cynic and suggest that this will prove to be a false dawn, that numbers will gradually dwindle as supporters tire of their novelty fix of ‘friendly opponents’, and with no competition points or ladder positions to play for in order to fully validate the renewed existence of their heroes.

But for now, the fact that there is even a Force team at all given what happened last year, and that rugby followers across the Nullarbor can plough their emotional attachment to the game into a side that represents them and where they come from, is surely no bad thing at all.