The Junior Wallabies hopes of U20s World Championship success have ended at the hands of a familiar foe, with a hard-fought 27-18 loss to New Zealand’s ‘Baby Blacks’ in Perpignan, France this morning, leaving them out of semi-final contention.

In what was an entertaining contest between the trans-Tasman rivals, Australia did their utmost to upset the reigning champions, twice coming within a couple of points, before a final try to New Zealand sealed their fate, and ensured a third place finish in Pool A behind the kiwis and Wales.

“I can’t fault the boy’s efforts, we put our heart and soul into that match tonight,” said captain Tate McDermott. “We put a show on and really had a crack at New Zealand, but they were just too good.

“We needed to capitalise on their little defensive errors, we lost the match tonight by not doing that. We need to keep working on our defence, we leaked a few tries in the wide channels. We’ll build on what we started tonight, and we will turn some heads in this competition.” 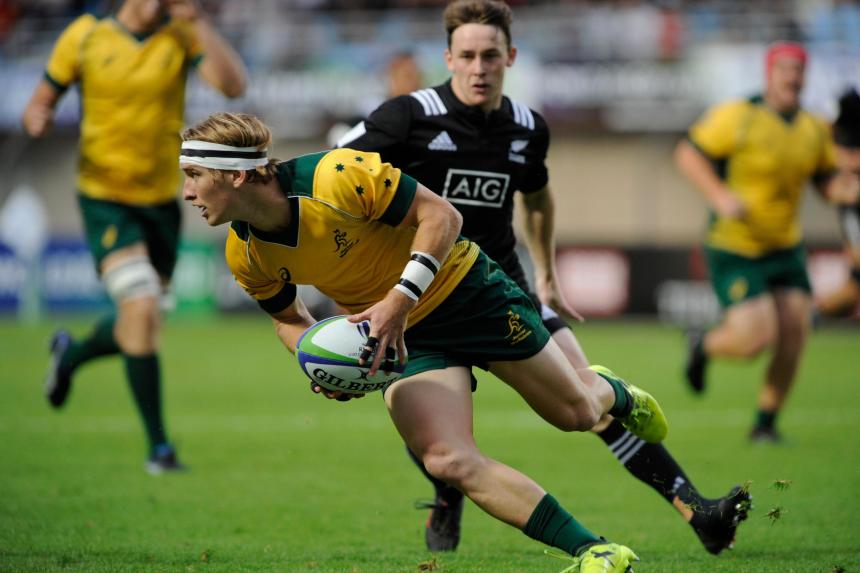 It was New Zealand who went in first with flyhalf Harry Plummer darting through to score, before Isaac Lucas reduced the arrears with a penalty. A 70-metre run from no.8 Devan Flanders took the Baby Blacks out to a 14-3 lead, but the Aussies hit back when Fraser McReight powered over the line following some good lead-up play from his team mates.

Australia’s dominant scrum brought a penalty try – when was the last time that happened against a kiwi side? But another 3pts off the boot edged New Zealand in front 17-15 at the break, with it all to play for in the second forty.

A penalty apiece made it 20-18 in favour of their opponents, but the young Aussies’ gallant defensive efforts were finally overcome when Jamie Spowart went over and Plummer added the extras.

Australia weren’t going to die wondering, and a late surge looked like it could still snatch victory from the jaws of defeat. But the Baby Blacks hung on desperately to record a 27-18 win that puts them into the final four, and a meeting with France to see who faces England or South Africa in the title decider.

Up next for Australia is the consolation prize of a 5th place semi-final clash with an impressive Italian side, who beat both Argentina and Scotland and missed out on the chance for greater reward by a point. KO 12.30am (AEST) on Wednesday 13th June.