They’ll be the first to admit there are a few work-ons for game two. But the Wallabies did enough at the right moments in game one to deserve to beat Ireland 18-9 in the tri-series opener in Brisbane on Saturday night.

A test match that always loomed as a tight, tense affair proved exactly that, with the difference being Australia’s ability to strike gold from very few opportunities, off the back of a hugely impressive defensive effort. A try in each half from Bernard Foley and David Pocock was enough to leave Ireland chasing a game in which they showed plenty of reasons as to why they are ranked the no.2 side in the world, while also illustrating that the gap to the Wallabies in fourth is marginal.

Pocock was a standout, a menace at the breakdown as always but offering plenty around the park with over 20 tackles and topping off his efforts with a try. But he was ably assisted by an effervescent performance from Will Genia behind the scrum, the aerial prowess of Israel Folau, and a desire across the board to smash anything in a green jersey into next week.

The loss ended a 12 game winning streak for Ireland. But having made six changes to the run-on side that won the Grand Slam against England last March, you get the feeling that coach Joe Schmidt won’t hold anything back for Melbourne next weekend.

It was an inauspicious start from Ireland, Rob Kearney taking out his opposite number Israel Folau in the air from the kick-off, and gifting the Wallabies early field position. But that leg-up was immediately cancelled out by a nervy first throw from debutant Brandon Paenga-Amosa that was picked off by Irish skipper Peter O’Mahony.

However, Folau’s second leap into the Brisbane sky from a Kurtley Beale up’n’under paid dividends when Ireland strayed offside, and Bernard Foley opened the scoring with a regulation 3pts from in front.

The visitor’s started to put some trademark attacking patterns together, with wraparound plays from Joey Carbery at 10 – in for Johnny Sexton – a feature, and plenty of decoy runners keeping the Wallaby defence firmly on their toes. But the home side had done their homework, and scrumhalf Conor Murray was clearly a target, both Marika Koroibete and Beale giving him a less than generous welcome with a couple of belting rib-ticklers.

Carbery then copped some similar treatment from Michael Hooper, much to most of the Suncorp Stadium crowd’s delight. But after resorting to some pick and drives up the middle, the Irish forwards made enough headway to draw an offside penalty 10 metres from the uprights, and the tyro flyhalf had recovered enough to level the scoreboard. 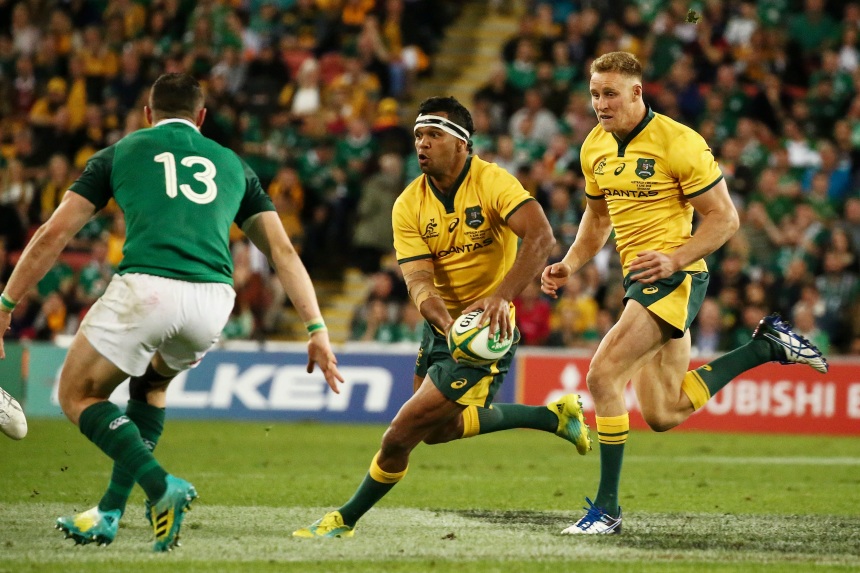 Australia thought they were in for the first five-pointer near the end of the first quarter, Beale doing what he does best to drift inside a couple of defenders and put on the afterburners before firing it wide for Koroibete to run in. But the Melbourne Rebels speedster hadn’t factored in the determination of Irish winger Jacob Stockdale, who showed that his defence is just as impressive as his try-scoring feats since his ascension to the test arena, reeling in Koroibete and forcing him into touch.

Whether that missed opportunity played on the minds of those in green and gold is a moot point, but the ensuing five minutes didn’t exactly illustrate a team with clarity of mind. A breakdown penalty conceded by Hooper in front of the sticks allowed Carbery to edge the visitor’s in front 6-3, and a botched restart – Adam Coleman in front of Bernard Foley’s kick-off – wasn’t the best way to reassert authority.

Indeed, as the half wore on, Ireland’s confidence in their game plan grew. Conversely, Koroibete’s thwarted surge was the only time the Wallabies had genuinely threatened the opposition 22 with ball in hand in the opening half hour. Starved of possession and pinned back in their half by the astuteness of Murray’s box kicks, they were being forced to work off scraps. So when they duly struck the first five-pointer with relative ease on 33 minutes, it came as a pleasant surprise.

A box kick from Will Genia was misfielded on the flank by Rob Kearney and David Pocock pounced to seal it off for Australia. Recycling infield, Genia spotted a lack of green jerseys on the opposite wing and three passes later, Dane Haylett-Petty jinked his way over the gain line, Koroibete carried within a couple of metres, and Genia was back on hand to put Foley away on the short side for the corner.

The Waratahs flyhalf couldn’t convert his own good work from the angle, but there was a palpable buzz amongst the Wallaby players and their faithful in the crowd. And with a two-point ball game at oranges, there was plenty for both coaching teams to get their teeth into during the break.

It looked like Ireland had benefitted the most from their time in the sheds when no.8 CJ Stander burst through a giant gap shortly after the restart, and pinned back his ears for the line. But a double-team tackle from Koroibete and Haylett-Petty felled him just shy of the chalk, and the TMO confirmed there was no clear grounding as he rolled on the floor and attempted to find grass beyond the twisted mess of gold-clad bodies. 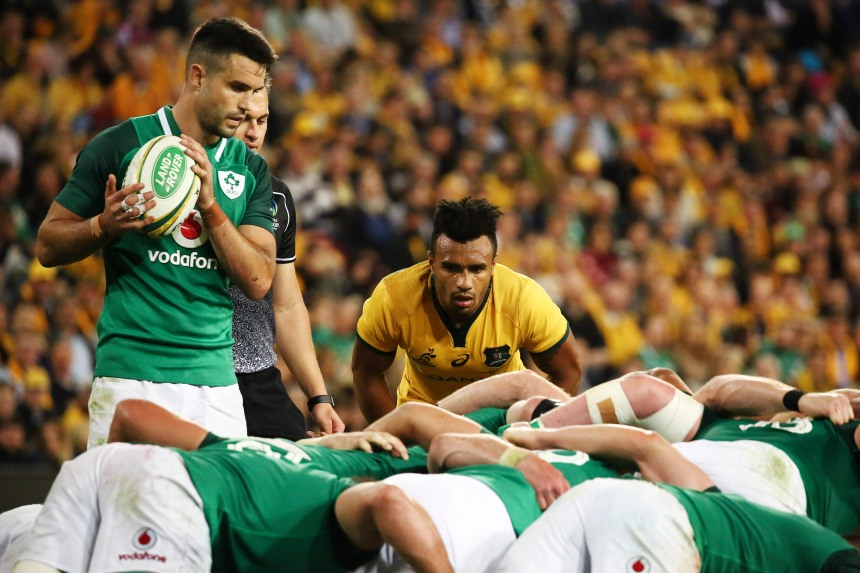 Ireland went again, building 19 patient phases from the ensuing five-metre scrum to try and find a way through. The Wallabies held firm and took their opportunity through arch-pilferer Pocock when it came, only for an overthrow at the lineout to put them on the backfoot once again. But when another offside call on captain Hooper gave Carbery another look at the posts, he bypassed to chance to give the visitor’s a one-point lead.

Fast-tracked Wallaby debutant Pete Samu made an immediate impact when he joined the fray after Caleb Timu went for an HIA, stealing ball on the floor with his first touch and earning a pat on the back and a word in the ear from Pocock for his troubles. But the old master came unstuck in the 54th minute, pinged for going off his feet, and Carbery never looked like erring a second time.

As well as the young no.10 had done with his time in the spotlight however, there would have been no complaints from the Irish hordes in the grandstands when he was replaced by Johnny Sexton. The finest flyhalf in the northern hemisphere over the last 10 years, Sexton was joined by fellow stalwarts Tadhg Furlong and Cian Healy, as coach Schmidt looked to lock down the remaining 20-plus minutes with a few experienced heads.

But Australia had other ideas, and as the clock ticked over the hour mark they produced another piece of opportunistic but clinical attack to grab try number two. Or so they thought.

Samu Kerevi was the catalyst, his hit on Bundee Aki on the Irish 10-metre line backed up by a wave of gold at the clean out to give the Wallabies possession. And when Will Genia found Beale on his inside, the mercurial centre kept Ireland guessing with the ball in two hands, drifted wide and isolated a couple of retreating forwards before finding Foley, who had Folau on his outside for a run to the corner.

However, before Foley could line up the conversion referee Marius Jonker called time off to check potential foul play, and in tandem with the TMO, decided that Adam Coleman had taken an Irish player out off the ball in an earlier phase. The combative lock looked to have committed to the tackle, only for his intended target to be used as a decoy and not receive the pass. But the after’s on the floor certainly didn’t help his case.

Perhaps fired up by a sense of injustice, Australia took things up a notch as they searched for redemption. Pocock was getting through a mountain of work at the breakdown and in the tackle stakes to help set a platform, which Genia was utilising to speed up his service and ask a few more questions of the opposition line.

But it was a good old-fashioned set-piece that did the job. A pack refreshed by the introductions of Tom Robertson, Tolu Latu and Taniela Tupou up front, drove Ireland back at scrum time to earn a penalty, leaving Foley to dissect the uprights and restore Australia’s lead at 11-9, with just over 10 to play.

Those precious points were backed up by another sensational take in the air from Folau, a pinpoint box kick from Genia, and a superb kick-chase led by Koroibete that eventually led to another penalty, as the Wallabies went for the jugular. This time Hooper opted for the tap and go, and after a bevy of work-hungry forwards had battered the Irish line, a short pass from Genia found the everywhere-man Pocock, who drove his way over from a metre.

Foley added the extras and with time running out, Ireland found themselves two scores down. They thought they had at least a consolation after the siren when replacement Kieran Marmion went in. But again, the ever eager TMO intervened to rule a knock on, and round one in this heavyweight clash belonged to the home fighter.