A thrilling finale to the 2018 NRC competition has seen the Fijian Drua claim an inaugural title, with a 36-26 defeat of reigning champions Queensland Country in rain-soaked Lautoka.

Almost 7,000 turned out in the island nation’s second largest city to cheer on their local heroes, and they weren’t to be disappointed. Facing a team that had beaten them in all three previous encounters, and who had held them to 20pts or less each time, the Drua weren’t going to die wondering for a fourth time.

Trailing early to a try from Chris Feauai-Seutia, they came back to lead 19-12 at the break off the back of some impressive play in the tight from their hardworking forwards. They still ran the ball at every available opportunity, but needs must when it comes to grand finals, and if that meant getting their hands dirty with a barrage of pick and drives, they were more than up to the task.

A second try of the game for lock Albert Tuisue – Man of the Match for mine – opened up a 14pt gap after the restart, before Country hit back through their own resident Fijian flyer, Filipo Daugunu. Both teams then traded further tries to leave a narrow 7pt margin with the clock ticking down. But the Drua were not to be overcome, and a late penalty from Alifereti Veitokani sealed the title win.

In only their second season of a competition for which they were invited into as a tool for learning and improvement, it is the Fijians who have left the Australian sides playing catch-up.

It was the visitor’s who adjusted to the wet conditions better in the opening exchanges, ball-players Hamish Stewart and Duncan Paia’aua taking turns to pin the Drua back in their own half with some tidy positional kicks. And with the home side’s lineout misfiring from the first couple of throws, Country kept the pressure on and got their reward.

Pick and drives were the order of the day but just as the forwards looked to have forged a path straight up the middle, the backs took over. Sensing the Fijians were short out wide, scrumhalf Tate McDermott fed Paia’aua, who delayed long enough to draw in two defenders and throw a cut-out pass for fullback Jock Campbell to put Feauai-Seutia over in the corner. 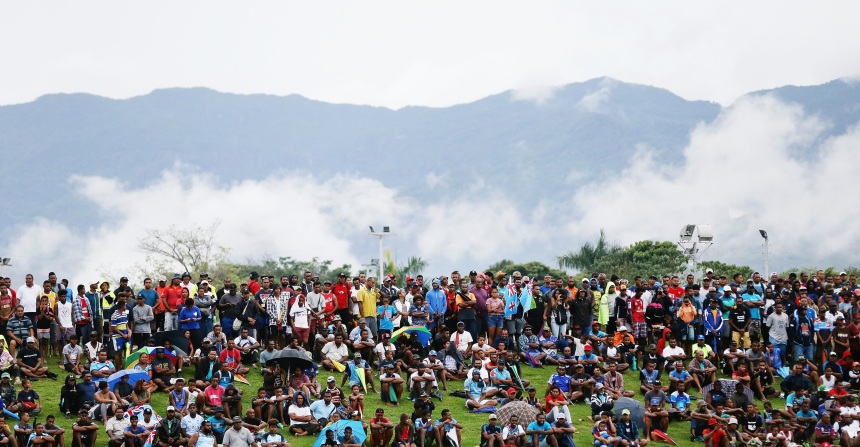 The locals turned up in their numbers on a day best-suited to staying indoors – Photo: Getty Images

Stung into action, the Drua soon got themselves within striking distance off the back of the invention of Alifereti Veitokani. A neat grubber in behind the Country line saw the flyhalf body-checked by Caleb Timu, and one quick tap penalty later, and the forwards were smashing their way towards the line.

Another penalty, again taken quickly, had bulwarking West Harbour loose forward Albert Tuisue over the line. However, referee Nic Berry was in perfect position to rule he had been held up, largely thanks to the work of Timu.

But they weren’t to be denied, Eramasi Radrodro scooping up off the ensuing five-metre scrum to power his way through several Country defenders, and find the chalk for his fourth try of the campaign. Apisalome Waqatabu‘s conversion had the Drua in front, and the partisan Lautoka crowd came to life under their umbrellas.

They were in even fuller voice by the end of the first quarter, another tap penalty for a high shot taken by Frank Lomani and carried 20 metres into the red zone. And when the forwards lined up for another rumble from the next ruck, the damaging Tuisue paved the way for lock Peni Naulago to barge his way through a couple of Country defenders and over the line.

With the sodden turf becoming increasingly unpredictable, the reigning Premiers were struggling to hold onto the ball for long enough to work themselves into threatening position. But a dart from McDermott off a lineout in the 25th minute looked to have got them back on the scoreboard, only for the scrumhalf to be summarily rag-dolled back where he came from by Drua loosehead prop Joeli Veitayaki Jr. 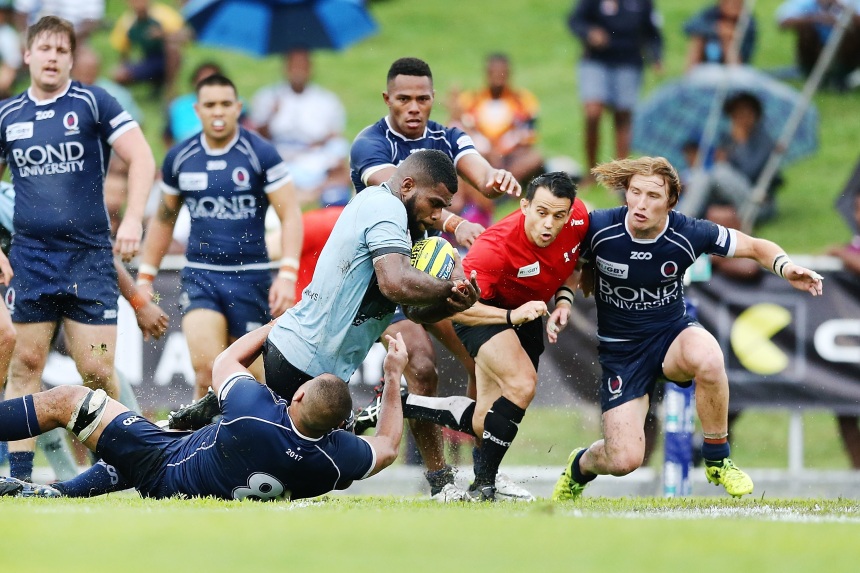 But showing that they were just as prepared to chance their arm in conditions far from conducive to running rugby, McDermott tapped himself a couple of minutes later and got his side within range once again. And when the ball came back infield for Jordan Petaia, the gun centre didn’t need a second invitation to run straight and run hard to splinter the Drua line and stretch for the chalk.

Stewart’s conversion made it all-square with just over 30 minutes played, but the scoreboard parity was short-lived. Running with the mantra of ‘if it ain’t broke, don’t fix it’, the Drua went straight back to sticking it up their jumpers, and highlighted once again the enormous strides Fijian rugby has taken in recent years in terms of forward play when they put together 23 phases for the tireless Tuisue to drive over from a metre for a third.

They thought they’d saved their best until last in the shadows of half-time, when hooker Mesulame Dolokoto took off down the right flank and slid home for a fourth, in a manner more becoming the legendary Fijian winger Rupeni Caucaunibuca than a front-rower. But to the disappointment of everyone except those cheering on Queensland Country, the score was subsequently ruled out by the TMO for a foot in touch just before he grounded, and referee Berry brought an enthralling opening stanza to a close.

Both teams returned to the field with the same attacking intentions, and the try-fest continued when Tuisue went in for his second of the afternoon in the 48th minute after his fellow forwards had set up camp in Country’s 22. But Queensland found their own Fijian flair to hit back four minutes later, lightning winger Filipo Daugunu – born some 200kms north in Labasa – going in for his 17th try in just two NRC seasons. 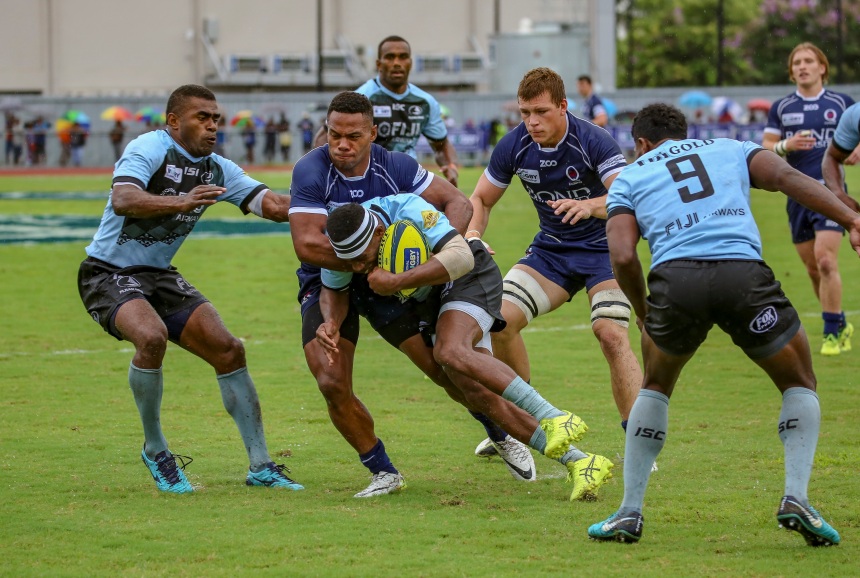 Country had their tails up and went in search of more reward for their efforts. But they were beginning to poke a stick at the Fijian bear, and each carry at the heart of the Drua line was met with an increasingly ferocious tackle. And when Stewart lost the ball forward from one particularly seismic hit, Waqatubu pounced to soccer the ball 60 metres upfield.

Country fullback Jock Campbell was forced to scurry back to retrieve possession, but when he turned he found three hungry Fijians lining him up. The first to reach him was Waqatubu, a panicked Campbell spilled the ball in contact, and it fell for the onrushing Apete Daveta to scoop up off the floor and put the supporting Veitokani away for the try.

With the NRC trophy slipping from their grasp, Country had just under 20 minutes to throw the kitchen sink at their hosts. At the same time, the Drua were within touching distance of a memorable victory on home soil, and were defending as if their lives depended on it. The result was a further series of huge contacts, and an increasing amount of afters and ill-feeling crept into the contest.

If anything was going to bring them undone from here, you felt it may just be the Fijian’s discipline – their biggest achilles heel across their two years of NRC footy. But after receiving a warning from ref Berry for repeat offences, they were forced to discuss their next move from behind their own posts, when a textbook driving maul saw Country hooker Efi Maafu crash over to edge the visitor’s back into contention.

Stewart’s superb sideline conversion made it 33-26 with 10 to play. But with both sides looking to strike a decisive blow, even the Drua’s natural instincts were finally suppressed by pragmatism when they were awarded a penalty and a chance to open up a two-score lead.

The long range effort from replacement Enele Malele bypassed the uprights, but chewed some vital seconds off the clock. And when they got another chance for 3pts after their revamped pack earned a scrum penalty in the 78th minute, Veitokani stepped up to put one Fijian hand firmly on the trophy.

As the full-time siren rang with the last scrum of the game about to be packed, the sun was just starting to poke it’s nose through the rain clouds in the surrounding hills. And when the ball was finally cleared into touch as Country tried to mount one last desperate assault, the spotlight was most definitely shining on Fijian rugby.

What a game. What a season. Vinaka Viti, ni sa moce! 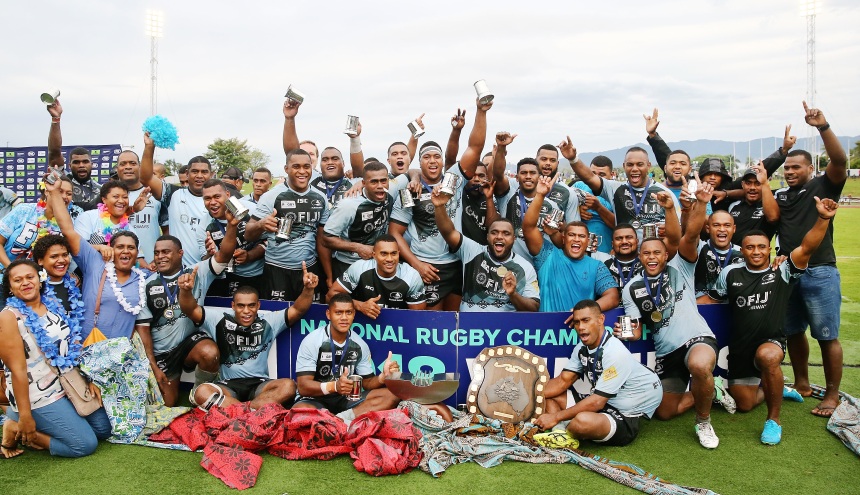