A tough, testing opening day at the Hamilton Sevens, has ended with the Australian Men’s Sevens booking a Quarter-Final date with hosts New Zealand.

Wins over Argentina and Wales put the Aussies in prime position. But defeat at the hands of an impressive Fiji in their last hit-out of the day, left them in second place in Pool A and with the challenge of another trans-Tasman clash ahead of them for a place in the final four.

“We played well in the first two matches to defeat Argentina and Wales and showed some big improvements across the two games,” reflected head coach Tim Walsh.

“Against Fiji there was some strong positives, including the best restarts we have had against Fiji for a long time. But ultimately we weren’t good enough to get the win.

Things got off to a good start on Australia Day when Ben O’Donnell opened the scoring against Argentina, only for the Pumas to hit back off a well-placed kick to make it 5-all. Henry Hutchison maintained his impressive try-scoring run when he then went over in the corner after some tidy footwork from O’Donnell carved out the opportunity, and it was the men in green and gold that led at the break.

A rampaging run from skipper Lewis Holland after the restart, opened up a handy 17-5 lead for the Aussies to try and protect as the clock ticked down. But they were breached again with a minute remaining, Argentina crossing through German Schultz and converting to make it 17-12 and ensure a nervy finish.

The Pumas dominated possession as they looked for a late chance of glory, but a textbook pilfer at the breakdown won the ball for Australia, and rubber-stamped a first-up victory. 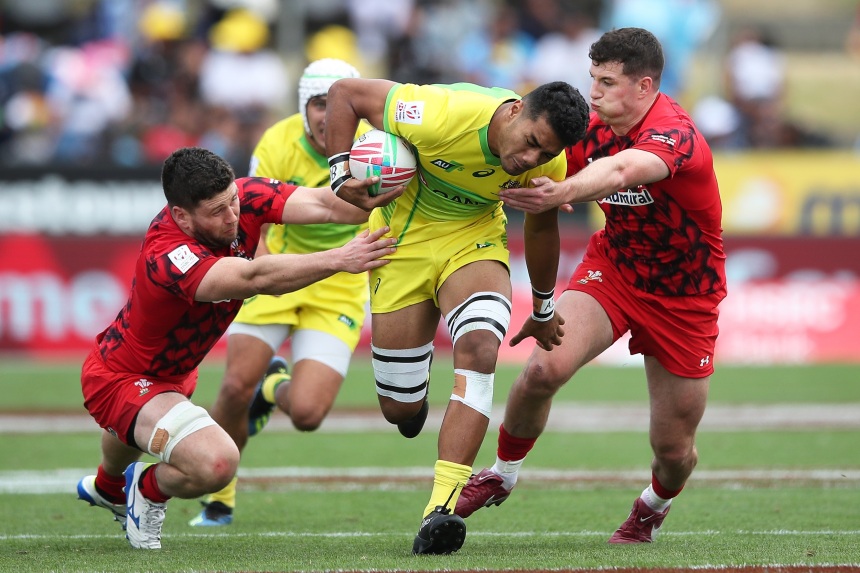 Next up were Wales, who enjoyed some early territory without truly testing the Aussie line, only for a sloppy carry to be punished by debutant Josh Coward, who pounced to put the ever-alert O’Donnell away for his second of the day.

A quickfire double from Lachie Anderson and Jeral Skelton – his first on the World Series – had Australia firmly in the boxseat, before another try right on the bell from Coward extended the advantage to a healthy 26-0 at half-time.

Wales regrouped in the second half to score in the corner through Rio Dyer and reduce the arrears. But the damage was already done, and neither side troubled the scoreboard again to leave the Aussies unbeaten going into the final clash of the day. 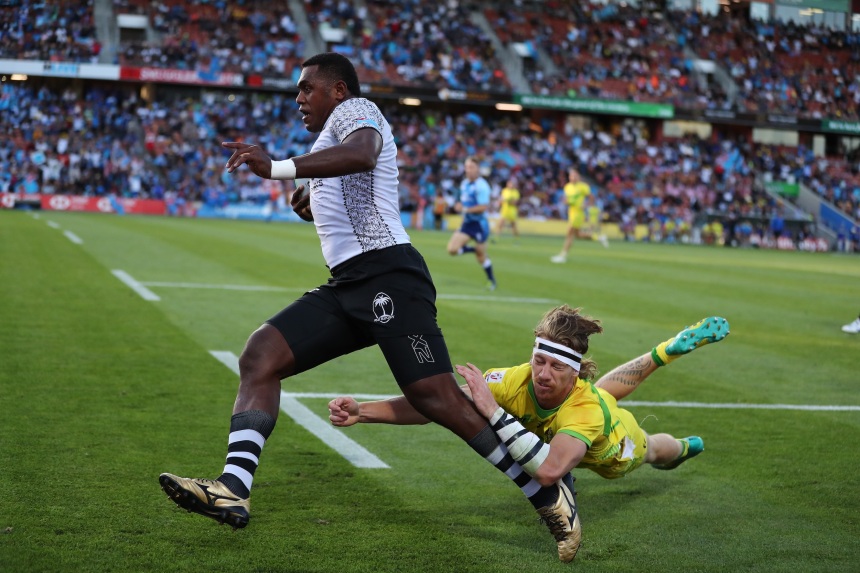 However, after successfully negotiating their first two potentially troublesome opponents, the step up in class when they took on Fiji was immediately apparent.

Champions in the last round of the Men’s Series in Cape Town, the flying Fijians wasted no time in laying down the gauntlet with Sevuloni Mocenacagi and Aminiasi Tuimaba helping their side to a 12-0 lead after just three minutes.

The Aussies hit back when some quick-thinking from Hutchison caught Fiji napping and paved the way for Anderson to race away. But they were soon punished themselves, Fijian skipper Kalione Nasoko finishing off a trademark counter-attack to restore the 12pt margin.

In danger of being blown away Australia didn’t panic, and after patiently playing keep-ball as the first half siren sounded, they forged a gap for the pacy Maurice Longbottom to streak through and keep them in touch.

When influential captain Holland then powered his way over a minute into the second half and John Porch added the extras, it was all-square and the Aussies were in sight of an upset. But 120 seconds later, Mesulame Kunavula finished off a fine team try to restore the Fijian advantage, and despite a gallant effort from the Aussies right to the end, it wasn’t enough to stop Fiji topping the group.