Posted on February 4, 2019 by Paul Cook Leave a comment

They went close but it just wasn’t to be for the Australian Women’s Sevens team yesterday, as they fell at the final hurdle in their quest for back-to-back Sydney 7s titles, beaten 34-10 in the Cup Final by a dominant New Zealand side.

Having seen off a spirited Irish outfit in the semi-final earlier in the day 24-12, with Ellia Green a standout with a hat-trick of tries, the reigning World Series champions were left with their trans-Tasman rivals standing between them and a repeat of last year’s success on home soil.

But despite giving their all in front of a passionate crowd, the Black Ferns were simply too good, benefitting from a yellow card to Aussie skipper Sharni Williams to run away with it in the second half, and extend their unbeaten run to 48 games.

“You don’t want to be chasing the game against them too much and unfortunately, during that yellow card, they scored two tries while that happened,” conceded head coach John Manenti.

“Obviously that gave them a bit of breathing space and once you start chasing, you need everything to stick and go to hand and it just didn’t quite. There were a few bobble balls that bounced left instead of right but full credit to them, they are a good outfit and they don’t give you too many chances.”

There appears to be a marked gap between the two sides right now. But given the abundance of Australian talent that was unavailable for the tournament through injury, or pregnancy in the case of Emilee Cherry, a first Cup Final appearance of the Series and the progress of several young stars should be seen as a positive, and evidence that this group is heading in the right direction.

“I’m disappointed for the girls as they worked really hard and showed some good improvement over the weekend and certainly from Colorado and Dubai. But we’re just going to keep working harder and keep chasing them,” promised Manenti. 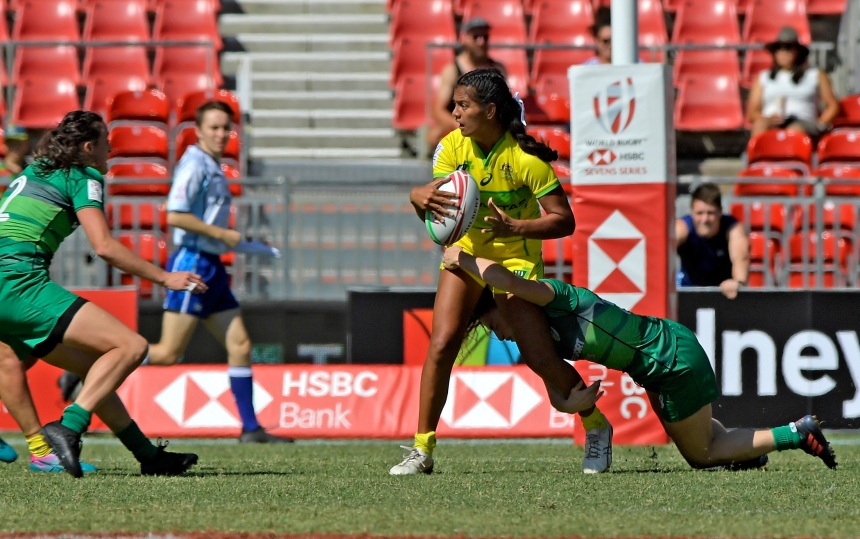 This was Ireland’s first-ever World Series semi-final, and they started confidently with a couple of early penalties piggy-backing them upfield after a couple of testing snipes through the Australian defence. But having barely touched the ball in the first two minutes, the home side pounced as soon as they forced a turnover, Evania Pelite running from her own 22, isolating an Irish defender, and releasing speedster Ellia Green for a 70 metre dash to the line.

The Aussies were in again soon after, captain Sharni Williams carrying the fight to their opponents before the ball went through the hands for Green to put on the afterburners for no.2. And they almost had a third when a cheeky grubber through from Emma Sykes, needed a well-timed Irish boot to stop Emma Tonegato dotting down. But the Olympian wouldn’t have to wait long, Pelite carving a path across an outnumbered Irish defence to put Tonegato over for a healthy 19-0 lead at the break.

Ireland needed something, and soon, and despite a terrific take in the air from Alicia Quirk at the kick-off, the girls in green swarmed in to scramble back possession. And after several thrusts at the line had been thwarted by desperate Aussie defence, they finally worked an overlap for Amee Leigh Murphy Crowe to find the chalk. 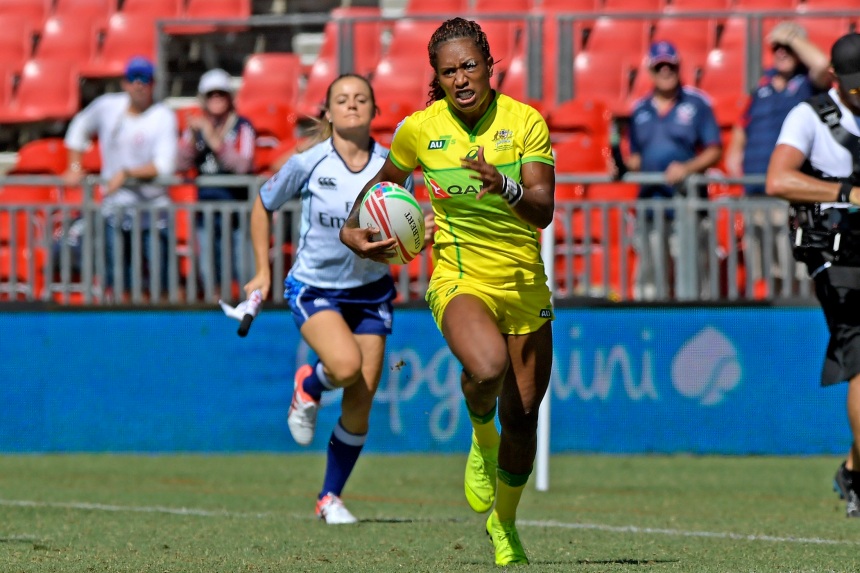 The home side were back in front of their own posts soon after, as Ireland’s confidence began to rekindle. A textbook pilfer from Lily Dick quelled the initial raid but Ireland came again, and some nifty footwork from Lucy Mulhall opened the door for Murphy Crowe to cross out wide for her second.

It was the Irish who now had all the ball, Australia looking suddenly jaded in the mid-morning Sydney heat. But as they tried to work another opportunity on the flanks, ‘The Ellia Green Show’ took over once more. Exhibiting the defensive attitude that has been a hallmark of her performances across the weekend, she simply smashed an Irish ball-carrier to the floor, before driving the support off their feet to earn a relieving penalty.

And she wasn’t finished there. From the next play Tonegato and Pelite worked it wide from inside their own red zone, before the explosive 25-year-old took off down the sideline again to go the length of the field for her hat-trick, and cement a Cup Final showdown with their trans-Tasman rivals.

Given the unbeaten record New Zealand were putting on the line in the final, it was always going to take a monumental effort to knock them off their perch.

What the Aussies needed was a fast start, but they were back under their posts within two minutes. Nile Williams and Michaela Blyde combined for Blyde to break a couple of soft tackles, and when the ball went wide, the prolific Stacey Waaka was on hand to put the first points on the board.

The Aussies aimed for an immediate riposte when Pelite scorched down the left flank, and it needed a last ditch tackle from Waaka to stop her finding the corner. But it didn’t take long for them to get on the board thanks to a bit of genius from Emma Sykes, spotting no-one in back play for New Zealand and kicking over the top to regather and dive home.

Even-stevens with a couple of minutes to go to half-time then. But what derailed the Aussie challenge was a yellow card to captain Williams for playing an opponent in the air off the restart, and it was exactly the opening the kiwis know how to mercilessly punish. 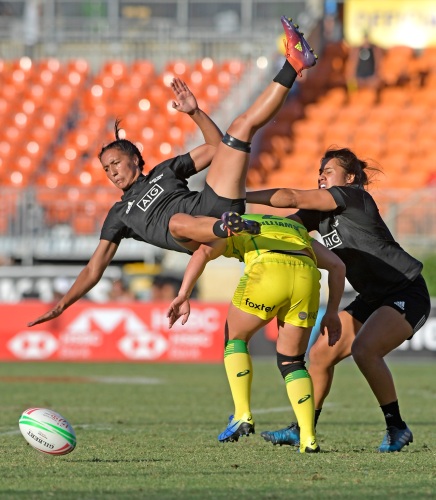 Australia scrambled well for a while despite their numerical disadvantage. But the surge of ball-runners and offloads now coming their way in a black wave was hard to hold, and eventually the powerful frame of replacement Shakira Baker took her through the line and just clear of a chasing Ellia Green to find the line.

Doubling the pain of the try was the sight of Green heading back to the bench having injured herself trying to prevent the score. And as if things weren’t beginning to unravel enough for the tournament hosts, the Black Ferns rubber-stamped their authority on proceedings even further with another before half-time, the elusive Blyde with too much gas to find the corner and forge an imposing 17-5 lead at the break.

It got worse for the Aussie girls after the restart, Blyde powering away from three gold jerseys on halfway for her second. But in truth, they won’t enjoy watching the tackle review with coaching staff on Monday. You simply can’t miss that many against a quality side like New Zealand, and not expect to get burned.

But they kept fighting, and back-to-back penalties helped them upfield where Sykes was intent on leading the fightback single handedly. Taking a quick tap she burned her opposition on the outside to claim her second of the match, and reduce the arrears to 24-10 with three and a half minutes left to try and rescue the situation.

To the joy of the green and gold faithful, Green returned to the fray, and just in time to perform her defensive heroics once again. Nile Williams was through the line and with open air and the posts in front of her. But Green chased her down, rag-dolled her to the ground, and again got back to her feet to drive over the ball and turnover possession. It was incredible, inspiring stuff.

However, there are just too many attacking options in this Black Ferns outfit, and if you shut one down, there are several more lying in wait to finish the job. So it was no great surprise when a well-worked set-play on 12 minutes, saw the elusive Waaka scoot out of traffic and show a clean pair of heels to race away and cement the win.

Emma Sykes runs in her second try in the final – Photo: J.B Photography

They put the icing on the cake in the closing stages, the basics of catch and pass executed to perfection to work an overlap for Blyde to get her hat-trick. And in the end, you can only take your hat’s off to the kiwis, they were simply too good on the day. The fact that they have now won six World Series events in a row tells its own story.

But given this Australian side is missing the likes of Charlotte Caslick, Emilee Cherry, Demi Hayes and Shannon Parry, and is putting its faith in 17-year-old talents like Sariah Paki in their absence, a runners up spot and valuable points towards Olympic qualification for Tokyo 2020 has to be considered a job pretty well done. 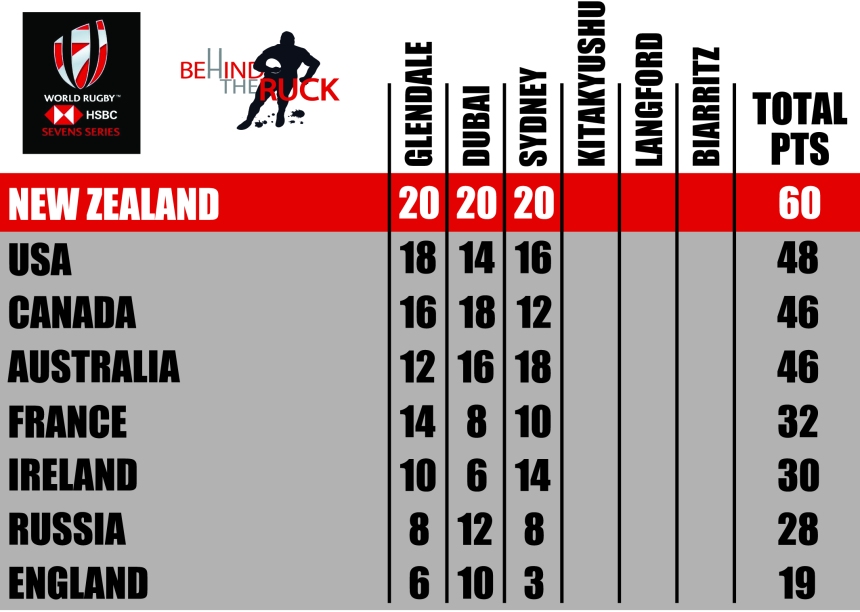