Posted on February 5, 2019 by Paul Cook Leave a comment

New Zealand are back on top of the World Series rankings after taking out the Sydney 7s title with an emphatic 21-5 defeat of the USA in the Cup Final. It was the American’s fourth final defeat in four events this Series. Meanwhile, a severely injury-hampered Australian side fought gallantly to finish 6th, with barely enough bodies left standing to take the field.

Having dominated the Men’s Sevens circuit for well over a decade, winning 12 of the first 15 World Series titles – largely under the tutelage of the legendary Sir Gordon Tietjens – New Zealand have been forced to take a backseat to Fiji and South Africa in recent times. There has been no title since 2014, their highest placing 3rd in the relatively fallow years since by their high standards.

But having triumphed at the first event of the current Series in Dubai, with this second title they have already beaten their sole tally of one in the whole of last season, and look set to challenge for the rest of the year in search of that elusive crown.

The Aussies however, can count themselves considerably unfortunate given the cruel hand dealt their chances of mounting a serious assault on another triumph on home soil. A gutsy effort against Fiji in the Quarter Final, played in incredibly tough conditions on a sweltering Sydney summer’s day, ultimately fell just short.

The hosts went down 22-17 to a Fijian side riding high off the back of two tournament wins in a row in Cape Town and Hamilton. But they also lost Maurice Longbottom and Josh Coward for their efforts, crushing losses given fellow playmaker Ben O’Donnell had already been ruled out for the rest of the weekend.

The defeat led them to a 5th place semi-final meeting with France, where another gutsy effort saw them through 17-14, and onto a play-off against South Africa, a rematch of the previous evening’s drama-laden pool clash.

They went into the match without the talismanic services of captain Lewis Holland, but still produced enough indomitable spirit to haul their way into the lead with seconds remaining, only to suffer the last-gasp fate they had bestowed upon the Blitz Bokke the night before.

“It was always a tough ask with basically nine players but I thought we did well to stay in that game and we fought hard,” said Jesse Parahi, who stood up to be counted in the heat of battle time and time again.

“Unfortunately, it’s a bitter way to go out. We went out there and did our best but we are disappointed. We still have half the season left, it is a long season and teams will be moving up and down the table. We need to work harder and look after each other.” 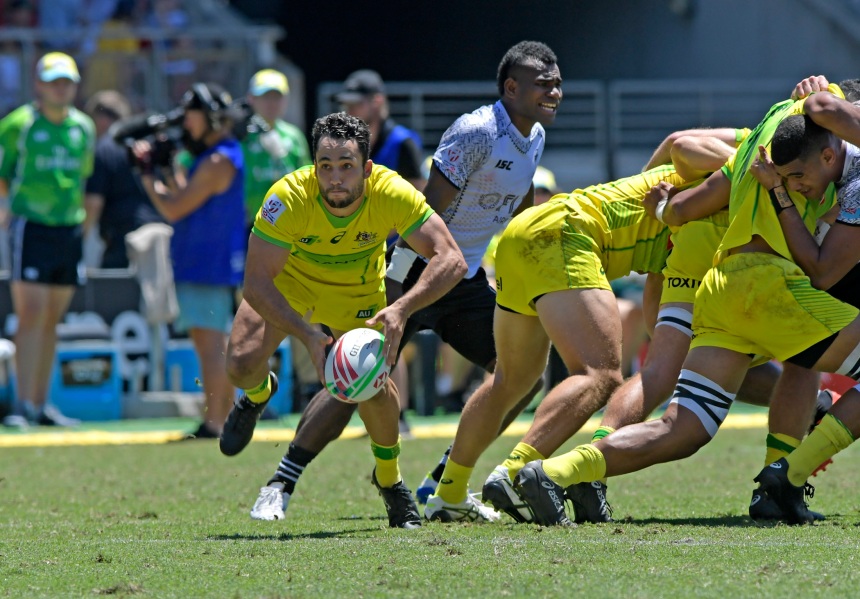 It’s a daunting task taking on the Flying Fijians right now, such has been their consistency of performance, and ability to score from anywhere just when they need to. But the Aussies went into this clash knowing that they had pushed the Pacific Islanders hard just a week before in Hamilton, going down 26-19.

Clearly uncowed, they asked all the early questions with Henry Hutchison and Jeral Skelton running hard and fast to try and fracture the defensive line. Fiji held firm under the onslaught, scrambling well to keep their hosts at bay. But the dam burst in the 3rd minute, Australia holding the ball for as long as it took to work the space for Maurice Longbottom to dive for the corner.

The downside was the sight of the exciting 24-year-old clutching his hamstring in the aftermath, and that was his tournament over.

Having had precious little pill thus far, Fiji showed exactly why they are such a force when they hit back from their first opportunity. Flooding the breakdown, they drove Australia off the ball, sent their hard-earned possession wide, and a trademark one-handed offload put Terio Veilawa away for the corner. 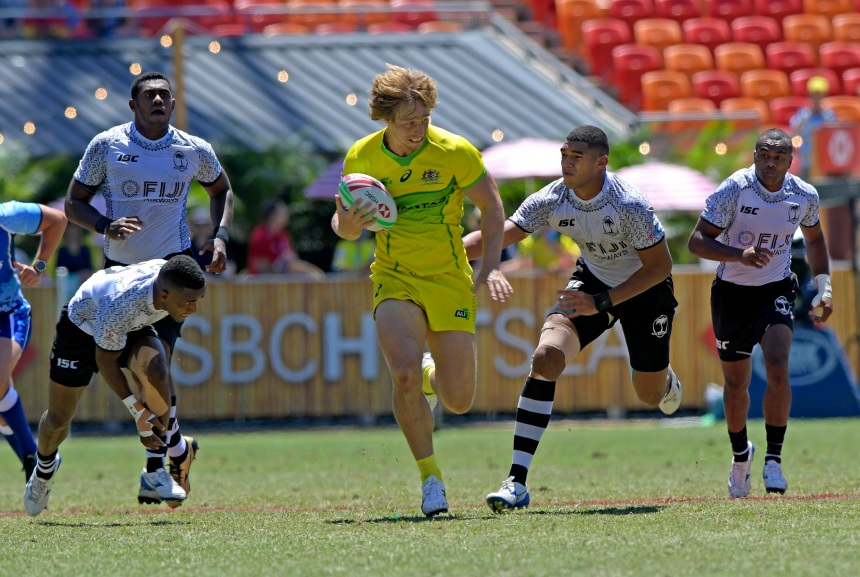 The Aussies suffered yet another setback when Josh Coward then limped off. But they regrouped well to launch an assault at the other end, the dynamic Parahi skittling defenders to get within five metres. But Fiji fronted up again to turnover, and when they garnered further possession on halfway and went through the hands for Mesulame Kunavula, he had too much pace for Lachie Anderson to edge his side in front 10-5 as the half-time buzzer sounded.

Australia got a leg-up shortly after the restart when try-scorer Kunavula saw yellow for throwing the ball away, and it was the chance they needed. Playing the numbers game they went wide for Jeral Skelton to step back inside and level the scoreboard. And they were in front within a minute, 13th man Brandon Quinn doing a fine job as playmaker to create a two-on-one and ‘Raging Bull’ Parahi finished the job.

But you can’t take your eyes off this Fijian side, and a high shot gave them a chance to click into overdrive from a tap penalty for the lightning-fast Alosio Sovita Naduva to blast a path through the gold wall and under the posts. And when Fiji threw bodies in at the breakdown again to win possession near the red zone, their ability to offload in the tackle and support was simply too good, and Nadruva went in for a double to send his side into another Cup semi-final, and Australia out of title contention.

With three players now out of action, coach Tim Walsh had to look to his bench for a lift as they took on France for a place in the 5th place play-off. And it was one sub in the shape of Waratah Michael Wells, frustratingly underused since his return to the shorter format of the game, that stepped up to the plate in the opening exchanges.

A tight, tense start in the afternoon heat meant that chances were at a premium. But with Wells happy to play the role of wrecking ball with a persistent stream of damaging carries at the heart of the French defence, Les Bleus finally wilted in the 4th minute, the finishing skills of Henry Hutchison to the fore as he went in by the flag.

But the heat-induced lethargy was contagious, and with both sides out on their feet just before half-time, the burly figure of Pierre Mignot broke through a couple of tired tackles and jogged under the posts, with no-one from either side with enough juice left to go with him. Stephen Peraz added the extras, and it was the French who held a slender 7-5 lead at the interval.

John Porch was left grateful that a pretty ordinary penalty – meant to go into touch for a lineout but lofted about 30 metres up in the air instead – wasn’t punished after the restart. But Australia still needed the TMO to confirm that Remi Siega had knocked on as he attempted to ground his own grubber.

Jeral Skelton takes flight for the first of his double – Photo: J.B Photography

France were suddenly looking fresher, and they extended their lead when Pierre Boudehent burst through Parahi and Anderson to go in and make it 14-5. With the errors also creeping up for an Aussie side unable to swap players out with the normal alacrity offered by a full bench, time was ticking down on their presence in the tournament.

The lanky 19-year-old kicked-off his match-winning cameo performance with a line bust on halfway, and enough pace to put any French defenders off a worthwhile chase. And with a minute remaining he struck again, dummying inside one blue jersey and palming off another to stretch for the line and put his side in front, with all the swagger of someone who’s been on the Sevens circuit for far longer than his spasmodic two year career thus far.

A missed conversion left a narrow 17-14 margin with Australia still needing to kick off. But as the French tried to build phases from their own half in search of a late winner, a superb steal from Hutchison over the ball won the penalty, and the Gilbert was duly sent to the stands to confirm a tired and decimated squads place in the 5th place playoff.

When the news filtered through that captain Lewis Holland was yet another injury loss ahead of the crucial rematch with South Africa, the odds had to be on the Blitz Bokke – who admittedly aren’t firing on all cylinders in this year’s Series – gaining revenge for the dramatic loss the previous night.

But the evening breeze now blustering through Olympic Park was a blessing for both sides, particularly the Aussies with just nine fit bodies to call upon, including 13th man Quinn. And they started promisingly, a couple of runs from the Gordon man getting them in range, only for Porch to then be pinged for going off his feet, and the alert Selvyn Davids to tap quickly and go the length for South Africa with no-one home.

Australia were having to defend manfully to stay in touch, but it took a seismic hit from Nick Malouf to stop Stedman Gans from adding to the scoreboard. Not only that, it kick-started a lengthy and patient play upfield, that eventually saw Parahi put Porch over out wide. He couldn’t add the extras leaving a 2pt deficit at oranges, but it was the home side that took the momentum into the half-time huddle.

They came back out still minus the services of Holland, and almost forged a score on the edge when Wells fed Anderson. But the Blitz Bokke scrambled well and a terrific tackle from Davids stopped a certain try. However, the home side had the bit between their teeth, and a tap penalty from Porch ended with Malouf powering his way over the chalk and just about grounding under pressure.

South Africa found another gear in response, helped by the fact that they could bring on an entire bench for the closing stages. Their attacking intent needed a couple of try-saving tackles from Porch and Quinn, with Siviwe Soyiswapi the main dangerman.

But just as it looked like a brave and gutsy effort from an injury ravaged side was going to get its just reward, Australia fell off one tackle too many, and one looping wide pass found veteran Kyle Brown with enough time and space to run in a crushing late winner.

A sixth placed finish doesn’t make much impression on the Australian’s sixth place on the series overall. But given the litany of lost bodies by the end, they’d shown enough hunger for the fight, and the promise of things to come through the likes of Skelton and Coward, that the Tim Walsh/Stephen Hoiles era appears to be heading in the right direction. 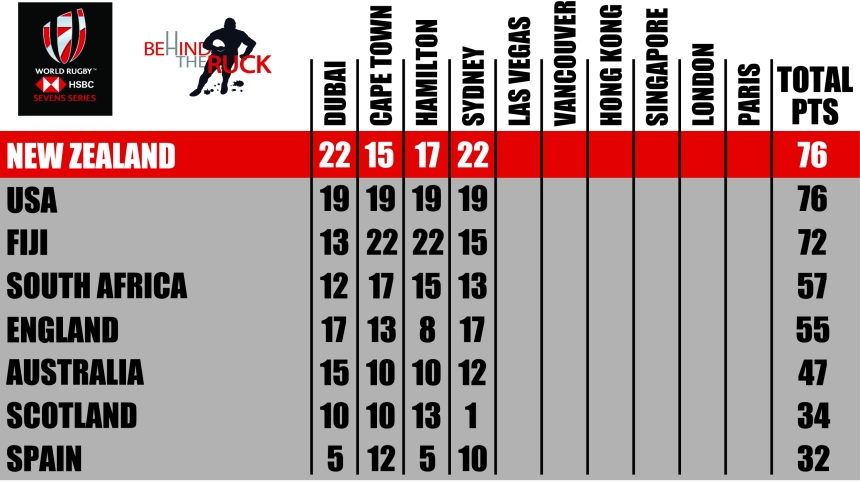