A week sure is a long time in footy. Eight days prior to stepping out for Eastern Suburbs in last Saturday’s opening round of the Intrust Super Shute Shield, flyhalf Mack Mason had been pulled from the field after just 56 minutes for the Waratahs, in their shock loss to the Sunwolves in Newcastle.

Roundly offered up as the scapegoat for a performance in which precious few who wore a New South Wales jersey that night could feel they did themselves justice, in reality, much like the team, he actually started brightly but faded as the game wore on. But his early exit fuelled a subsequent debate as to whether it was necessarily the right thing to do, by a player afforded precious little time as understudy to Bernard Foley in the last two-and-a-bit seasons.

Potentially damage his confidence by keeping him out there? Or knock it by removing him from the field?

Either way, for some players, such a public execution could have imbued an overload of introspection, and a severe hampering of belief. Thankfully, if his performance against Sydney University was anything to go by, Mason appears to have the cojones to put the game and its aftermath behind him, learn from it, and go again. And then some.

Such was his influence on the match, a victory for the Beasts of no little significance given the 49-28 margin over the reigning champions, you wondered if he had simply cocooned himself off from the media inquest that followed.

A game that was only in the balance at half-time thanks to his ability to punish Uni’s ill discipline with penalties, was taken by the scruff of the neck by the 23-year-old in the second half, with as fine a melange of attacking nous as you could hope to see.

When it was on to run, he ran it. When Uni’s defence was sitting back, he happily took it right up to their nostrils. But most tellingly in the final quarter, when the Students rushed up en masse, he plugged the gaps in behind with a succession of pinpoint crossfield kicks that Beauden Barrett would have been left purring in admiration at. 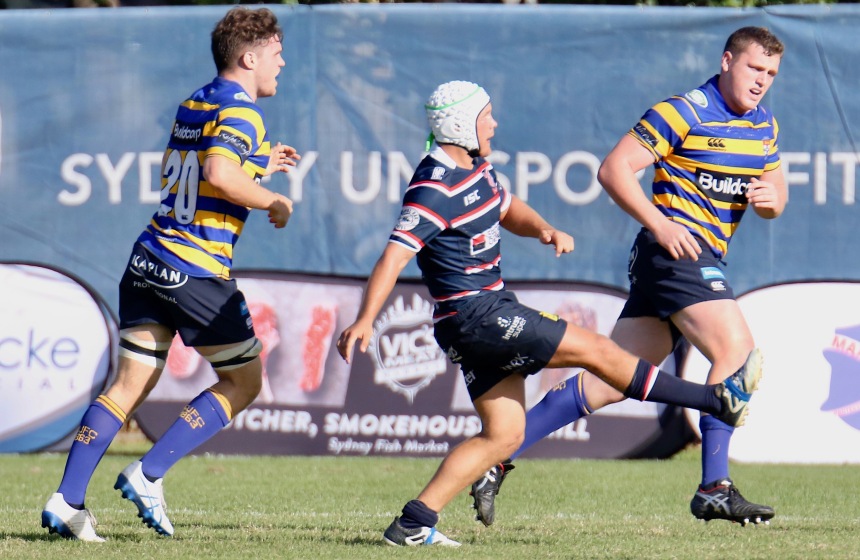 What was most impressive, and this may feed into a broader discussion down the track around the subtle change of emphasis from Easts this year under head coach Pauli Taumoepeau, was that he wasn’t following a set game plan per se, he simply adjusted his approach on the fly after identifying a potential area of weakness.

As a result, the visitor’s turned around a 28-23 deficit with four tries in a blistering final half hour, three of which came off the back of Mason’s quick-thinking, and faultless right boot. By the final whistle he had racked up a 24pt personal haul – one try, five conversions, and three penalties. But for someone who was a walk-in Man-of-the-Match recipient, he was keen to share any praise with the rest of his team for their efforts, and in particular the fellow members of his attacking think tank.

“In the first 20 minutes I thought we absorbed the pressure really well because Uni had all the ball and they only came away with seven points off the back of a scrum penalty and a yellow card,” he told Behind the Ruck. “So that was really pleasing to hold them off for as long as we did, and then to go into the half on top just through taking points every time we got in their 40, because we probably didn’t have as much ball as we wanted.

“The kicking game evolved as we went on. Myself, Archie King and Dan Donato, we all like to keep the game played on the front foot. We really wanted to play on our terms, and get our forwards going forward, and the bigger boys on Uni’s team retreated. Dan is really good to have on that right wing because he’s got a really big boot, and then Archie sees the game really well and he talks to me to tell me where the space is in behind.

“We really played a bit of a forward game going through them, and then we could go to the edge on the next phase with either the kick, or through the hands. And what was really good was that we played the phases rather than trying to score off every phase. In the second half we got hold of the ball and momentum turned in our favour, but we’ve still got a lot of things to work on. The biggest thing today was the team performance. Everyone was on the same page and we really got what we wanted out of the game.”

But how did he manage to move on so quickly and impressively from his testing time in the Waratahs’ hot seat?

The answer may lie in his upbringing, raised in cattle country in south-central Queensland, and accustomed to far greater life challenges than a mere game of footy as a result. It’s certainly imbued in him a steely resolve, and a healthy dose of pragmatism.

“It’s nearly a good thing, and a bit of a reality check,” he reflected. “It was obviously good to get that start and get those minutes, and I actually felt I did some pretty good things that I was happy about. But obviously there were some errors in my game as well.

“I like playing flat, I think that goes back to my league days and playing on top of defences. But the Sunwolves defence was really good, they were just man on and rushing out of the line, and I think we played out of the back a bit too much and behind the gain line, and then I was on the back foot. 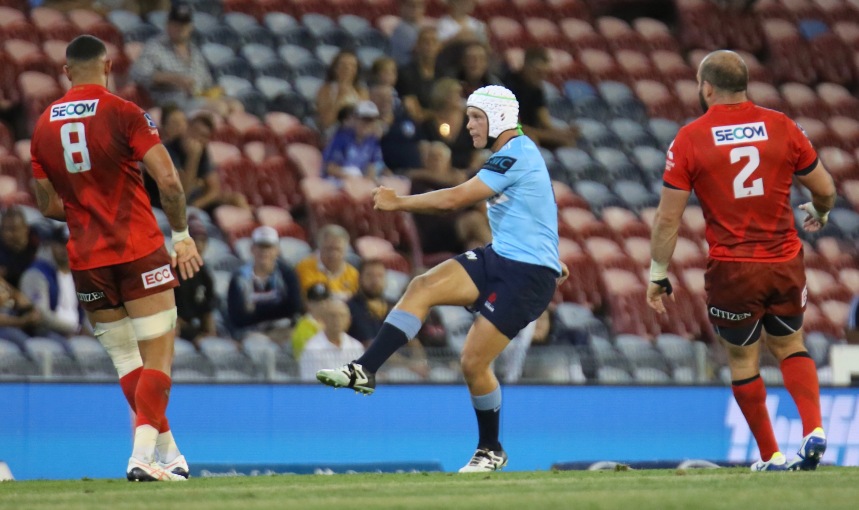 “So it’s just good to get back on the horse after last week. Get back out there, play a good game and a good brand of footy. I’ve really enjoyed it this week, I’ve just focused on myself and what I needed to do. It’s only my second full game of the year, so there were still a few cobwebs out there. But it went alright.”

Having orchestrated a 20pt win over the title holders, and helped Eastern Suburbs to their biggest points tally on Sydney University’s home turf since 1935, saying “it went alright” may be a glorious understatement. But coach Taumoepeau was more than happy to lavish praise on his prize pivot.

“There’s no denying that Mack really controlled that game,” he offered. “I thought there were three times the forwards let him down and he just adjusted to what was in front of him, and we scored on two occasions and just went out of play on the third one. That’s definitely something that Mack’s done on his own, he’s such a smart player.”

His club mentor was also disappointed with the brickbats that came Mason’s way after the Sunwolves performance. While he concedes that he is a fan, and therefore possibly a tad biased and understandably protective, he thought the denigration of one of his star assets went too far.

“I’ve got my own views on that Waratahs game,” he said. “Maybe my loyalty to him blinds me but I don’t think Mack was as bad as everyone’s been saying, or even bad at all, yet he was the scapegoat. But to come out and do what he did against Uni, that’s the type of character he is. He had a great day.

“There’s a perception that he played really badly, got dropped by the Tahs and came straight back to us. But he came along on Wednesday, didn’t actually train, but was just in and around the boys. And that was off his own back, he wasn’t meant to come in. Then on Thursday he got there early and stayed late with the boys, and he just feeds off that stuff, that’s his true character.

“As much as it pains me to say it, the Tahs have got a bye this week but I want him playing against the Rebels in two weeks. That’s our job. Then hopefully our program here brings up the next 10 to be able to control the game exactly like he did against Uni.”

Easts head coach Pauli Taumoepeau hopes Mason gets another chance for the Waratahs against the Rebels next weekend – Photo: Lachlan Lawson Photography

Before all those possible scenarios play out for Mason however, there’s the small task of taking on a Warringah side this weekend, that will be understandably smarting from an opening day defeat at the hands of Northern Suburbs.

And while a win against a side that have made the last two grand finals would be another handy box to tick, it certainly won’t do Easts any favours in trying to keep a lid on the growing external expectation that they will be the first Beasts outfit to lift a Sydney Premiership since 1969.

“It will be hard to control that,” concedes Mason. “But Pauli is a very humble bloke and humble coach, and if there are any big heads after beating Uni they’ll get squashed pretty quickly. It’s the old cliche of one game at a time but it’s more about building one game at a time. It’s only the first round, in the next game we’ll go another step further.

“You can’t really afford to take a step back in this comp because this year I think it’s going to be one of the strongest Shute Shields we’ve had – you’ve seen through the trials that there’s upsets left, right and centre. We just have to continue to focus on ourselves, keep building, and look at the next game, which is Warringah. They lost their first game, but Norths are a very strong team as well, so take that result with a grain of salt.

“Obviously I haven’t done much pre-season down at Easts. But Pauli has spoken a lot about our transition from attack to defence, or defence to attack, and that’s probably what wins game in the Shute Shield to tell you the truth. If it gets loose like it did in that second half against Uni, whoever can capitalise on those moments the best will win the game.”

One thing’s for sure, if Mason can produce anything like the masterclass he showed at University Oval No.2, the Rats will have to be at their absolute best to stay with him.