Anyone who wondered if incoming head coach Darren Coleman would be able to turn the ship around at Gordon in just six months, can happily read the positives in a narrow 31-27 loss to Southern Districts in their first hit-out of the season on Saturday.

For while it wasn’t the headline victory they craved to kickstart a new dawn at Chatswood Oval, it very well could have been, and there was more than enough in the performance to suggest that better days are indeed ahead for a team that sang the club song in triumph just once in 2018.

Six wins from seven in grade and colts are an indication of strength-in-depth across the board, and but for a misfiring lineout, an up and down scrum effort, and indifferent levels of concentration across the 80 minutes, they may well have come out on the right side of the ledger.

As it was, a dogged display that saw them do just enough to get out of dodge with the spoils, saw Souths join Eastwood at the top of the tree as the only sides with two wins from two. But they were breathing pretty big sighs of relief at full-time.

The home side were on it from the off, aggressive linespeed forcing a turnover and then a penalty inside the 22 when a Rebel went off their feet, and flyhalf Sean Kearns did the rest. But the early score was nearly cancelled out when former Brumby Robbie Coleman had his first clearing kick charged down by a rampaging Nathan Lawson, only for the Souths flanker to see the ball career backwards in favour of a Gordon jersey for a 22 drop-out.

Marcus Carbone then profited from a neat pop pass from Shambeckler Vui to race clear for the visitor’s with an overlap on his outside, only for the normally reliable hands of the Souths co-captain to let him down with a pass to the floor that Waratahs winger Curtis Rona couldn’t scoop up. And two minutes later, the Rebels were back on their own line to watch a second Kearns kick sail through the uprights after they had been pinged for slowing down Highlanders ball.

It got even better for the hosts shortly after. Winger Tautalatasi Tasi had already given an indication of his lightning turn of speed from an earlier break. But when a loose clearing kick from Souths found it’s way to him in the 13th minute, the former Rabbitoh flyer didn’t need a second invitation to showcase it again, with a searing 50 metre dash through the line and around a couple of flat-footed Rebels for the chalk.

Kearns added the extras, and at 13-0 the new Highlanders regime was ticking along nicely at almost a point a minute, without having seen that much ball. But they suffered their first setback with the subsequent loss of fullback Coleman, the 78 game Super Rugby star forced from the field with what appeared to be hamstring trouble, and this after he had dislocated his finger in the warm-up. When it rains…

They continued to test the Souths defence with a willingness to run and stretch the field, getting some pay down the sideline and happy to probe with kicks in behind if it suited. And when they weren’t in possession, a well-drilled line and a host of dominant tackles was making it difficult for the Rebels to get any flow into their game.

Perhaps a tad startled by the early reversal on the scoreboard, the visitor’s needed something to gain a foothold in the contest. And they got it through a platform set by the forwards, several barraging carries off a lineout getting them in range and earning a penalty, from which they opted for the scrum. Despite the easy 3pts on offer, that decision was rewarded when the ball was sent wide for Rona to slip a soft tackle and dive for the corner.

The try seemed to release a bit of tension from Souths’ play, and they duly took up residence in the Gordon 22 looking for another. They could/should have had it just before the half hour when they worked the numbers out wide, only to take far too long to get it there. But the pressure was mounting, and when another scrum put-in gave them a platform to strike from 10 metres, Carbone’s fellow co-captain De Wet Roos caught the Stags defence cold to dummy and snipe his way over.

Last year’s Intrust Super Shute Shield leading points scorer Christian Kagiassis was left with another tough conversion from the sideline, and a second near-miss left Gordon with their noses in front at 13-10.

The Highlanders got themselves back in the opposition red zone after scrumhalf Jacob Abel smartly manoeuvred them forward off a bevy of willing runners, and an offside penalty gave them a chance to extend their lead a couple of minutes before the break. But the lineout option was wasted by an overthrow from Mahe Vailanu – his third by that point – and compounded by a high shot on Roos, and a relieving penalty.

That looked to be that for the opening stanza, but there was still time for a late twist. Souths built some phases from their own half that kicked up a gear when Rona took off down the touchline to get them within range. But after shuffling across field looking for holes, scrumhalf Roos spotted a gap in behind, and a well-placed grubber, the pace of winger Will Thomas, the giant in-goal areas at Chatswood Oval, and a case of third time lucky for Kagiassis, all combined to send the Rebels to the sheds with a 17-13 advantage.

They went on with it after the restart, some snappy tackling forcing Gordon backwards to concede a five-metre scrum. And after one reset the Souths pack went all in on the second hit, marching the Highlanders back over their own line at pace, and the referee running under the posts to signal a penalty try.

Now forced to come from two scores down, Gordon upped the ante, the elusive running lines and footwork from new recruit Jaline Graham to the fore. But it was from the set-piece that they hit back, the lineout gathered in this time for a potent rolling maul to get them within a few metres, and a couple of recycles infield ended with skipper Jordan Goddard smashing his way under the posts.

The game got a little scrappy for the next 10 minutes, neither side able to build much in the way of momentum, and neither flyhalf in Kearns or Bayley Kuenzle, able to exact much influence over proceedings. An irony perhaps given the fact that Dave Harvey (Gordon) and Jai Ayoub (Souths) – no.10 royalty in this competition over the last decade but now retired – were both in tow running the water for their respective sides.

Souths began to stretch their legs for the run home, Rona and the ever-reliable Apo Latunipulu testing the home defence out wide. But it was the piggies who stepped up when needed again, driving a lineout all the way home for hooker Blake Schoupp to dot down for try number four.

Kagiassis slotted the extras with ease, and 11pts down with just over 14 minutes to play, the Highlanders were at a crossroads. Last year, there was a good chance the towel would have been thrown in. But all the talk in the off-season under Darren Coleman’s tenure, centred around improved fitness, mental fortitude, and a desire to keep going.

And that they certainly did, a tartan wave beginning to flood the visitor’s half, only to be met with stiff resistance in the shape of the combative Nathan Lawson and Denny Godinet, who put in a couple of bell-ringers to keep the roaming Stags at bay. 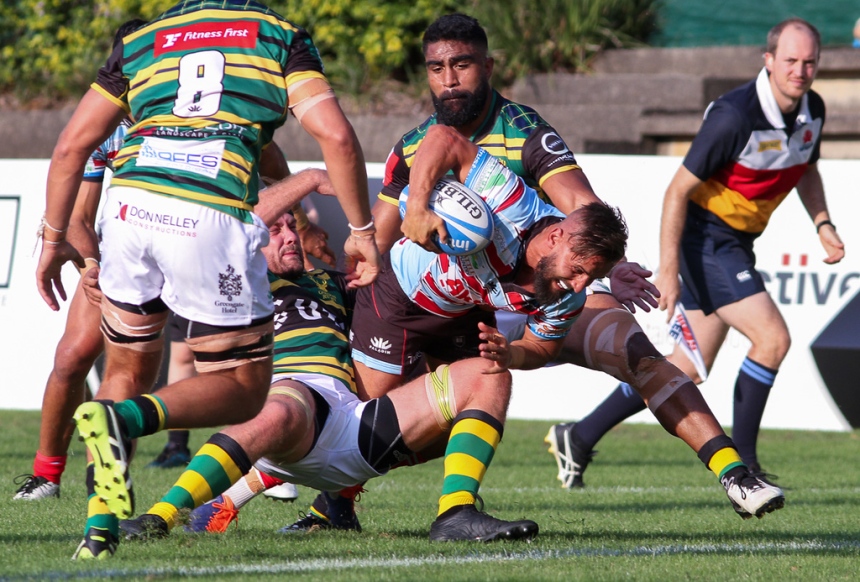 Carbone was leading by example too, playing in the second row instead of his customary 6 or 8 jersey, but proving to be a menace on more than one occasion as Gordon’s lineout struggled to make inroads. But resorting to pick and drives the hosts racked up a few penalties in their favour, and with three minutes left on the clock, Kearns took advantage to skip past his opposite number and over the line.

The young Irishman converted his own good work to make it a 4pt ball game at 31-27, but as it turned out, we were far from finished. A deliberate knockdown from Souths flanker-turned-prop Rodney Ma’a as Gordon tried to forge a late winner from their own half, saw the former Chatswood Oval favourite sent to the bin, and his old side offered the chance of a late reprieve.

Eight minutes of added time ensued – yes, eight – as the Highlanders threw the kitchen sink at their undermanned opponents. But such was the lack of faith in their ability to win their own lineout ball, when they were awarded successive penalties they instead opted for the scrum. And so began a pointless cycle of predictable infringements from a seven-man Souths pack, a refusal to kick for touch from their opponents, and no hint of progress.

Thankfully for those who didn’t fancy watching a day-nighter, the impasse was ended when Souths rake Schoupp got over Gordon ball to win a turnover, and cap a fine try-scoring 1st grade debut with a match-winning steal. But 4pts was a pretty fair margin over the 80 minutes, and anyone travelling to the green half of the Lower North Shore this season and expecting a walk in the park, is in for the rudest of surprises.