A superb Junior Wallabies side have downed New Zealand U20s for only the second time in their history, keeping them scoreless at 24-0 to claim the Oceania U20s crown for the first time ever in the process.

Randwick flyhalf Will Harrison kicked 14pts to help the Junior Wallabies along to a memorable victory in front of over 2,000 people at Bond University on the Gold Coast. It completed a whitewash in the tournament, with the side having already beaten both Japan (64-14) and Fiji (16-0), and is the perfect preparation ahead of the World Rugby U20s Championship to be played in Argentina in June.

“We have prepped well for a good performance tonight and the boys delivered,” said head coach Jason Gilmore. “The most pleasing aspect was to keep our opposition scoreless in our last two matches.

“Winning is a habit and we aimed to win this tournament which is a great effort. However, we can’t get carried away. The World Championship is the aim and we need to stay humble, keep working hard and enjoy what we do.”

Will Harrison enjoyed a fine night with 14pts off the boot – Photo: Oceania Rugby/Sportography

The young Australians got off to a good start when Harrison slotted an early penalty, and after a kicking contest played out in the wet conditions, he punished further ill discipline from the Baby Blacks to open up a 6-0 lead.

New Zealand missed a chance to hit back when Fergus Blake couldn’t find the uprights, and after weathering an onslaught from their trans-Tasman rivals, Harrison added a third penalty as the Junior Wallabies continued to take full advantage of any indiscretions.

It was 12-0 before the break, the home side’s scrum enjoying dominance and thwarting another New Zealand raid, which eventually led to yet another penalty duly dispatched by Harrison. But the Junior Wallabies suffered their first setback of the night when Eastern Suburbs’ no.8 Will Harris went to the bin for a high tackle.

Again, New Zealand weren’t able to capitalise as the Australian defence held firm. And after a stalemate third quarter, it was the Junior Wallabies who came up with the play that effectively sealed the contest with the first five-pointer of the match. Noah Lolesio from the Tuggeranong Vikings, put up a perfectly weighted crossfield kick into the hands of Triston Reilly, and the Randwick winger crossed the chalk to help his side out to a dominant 17-0 advantage. 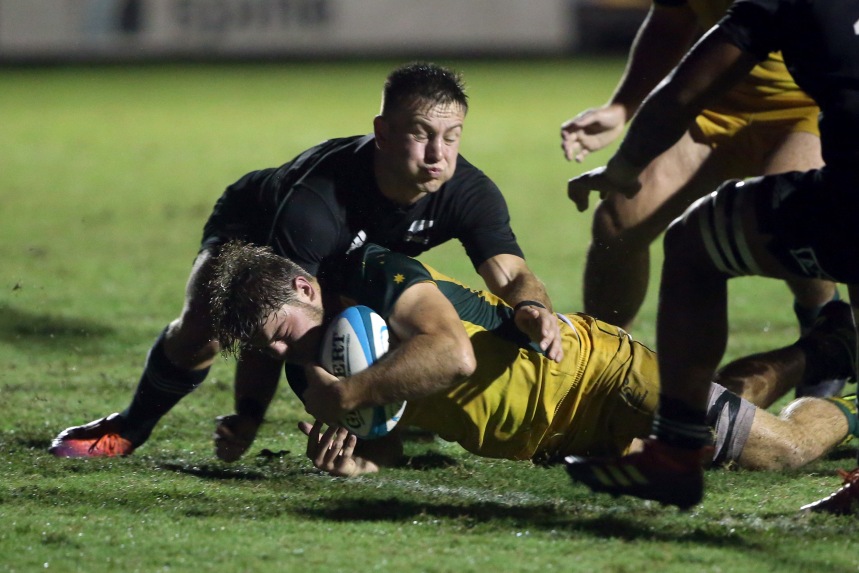 The forwards then put up their hands to finish the job, a lineout maul driven forward before skipper Fraser McReight powered over the line, and Harrison accurate again off the boot to make it 24-0, and secure a landmark victory for this talented Junior Wallabies side.

They now have a couple of months to continue their preparation before heading to Argentina for the World Championships, where they will compete in Pool B against England, Ireland and Italy.