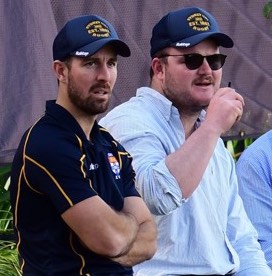 All photos by AJF Photography

1. ALEX BATHO: ‘Batho’ is a club stalwart, playing over 100 grade games for Sydney University in the front row. Mastering the dark arts is what Alex does best, he’s a quiet achiever that is always looking to the opposition bench to see what his next target looks like, before he turns him inside out at scrum time. ‘Batho’ is very fond of scrummaging, and you will find him pre-training sharpening his 22mm studs with a bench grinder. The longevity of his career has been helped by his sponsorship by ASICS Career Savers, prolonging it to this day.

2. YUTARO FUJIYAMA: ‘Mount Fuji’ joined the club from Japan in early 2019. His English consists of “Please, Thank you, and Sorry”, and as a hooker, this has made the lineouts challenging. Fuji is the first one to training throwing lineouts with his Japanese counterparts, and the last one to leave. Rumour has it he was still throwing lineouts late after training until the groundsman turned the lights off at 11pm.

3. CHARLIE HANCOCK: ‘Chuckie’ loves to hit a short ball off the 10, and eat loosehead props as an entree. He is the master of poor decisions on and off the field, If it’s a lecture from him on how poor your scrummaging was throughout the game, or a bouncer copping an earful for not letting him in, there is 99.99% chance that he’ll finish it with “You’ll be receiving a letter from my father.”

4. PETER FENWICKE (c): Club Captain and 3rd Grade Captain, son of the great Jim Fenewicke. Loves open space, flick-passes and grubber kicks –  much to the coaching staff’s dislike. The energy and leadership that he has brought to the 3rd and 4th Grade group throughout the season, set the platform of getting to where we are. His strong carries and offload post-contact have put many of his team mates over for tries throughout the year. Peter will fly to Texas on Sunday morning to finish his University studies as a Chemical Engineer.

5. LUKE PORTER: ‘Ports’, a quiet achiever over the years, has made quite a large statement in 2019. With his ball carrying, ability to break the line, and the engine room of a backrower, he is destined for higher grades in the coming years. As ‘Ports’ runs down the tunnel he demolishes two bananas and a Gatorade prior to taking the field, and after every warm-up at training he hits me with the same question – “We scrumming tonight Cato?”

6. JACK STANFORD: Every club needs a ‘Stampy’, but not every club can handle a ‘Stampy’. He is the joker, pest and all round annoying s**t that most clubs have. If it’s interrupting serious team meetings, to giving the coach a ‘wet willy’ (not half as disgusting as it sounds), you name it and ‘Stampy’ has done it. In saying that, his love for the club and team mates is shown through his mannerisms and the way he plays the game, right to the very edge. Running the Kyoto Marathon at the start of the year put ‘Stampy’ in an interesting position. He was a backrower that came back looking more like to a winger, but this added another dynamic to his game and has served him well throughout the 2019 season.

7. HAMISH DUNBAR: A latecomer into the side that has really embraced the 3rd and 4th Grade culture. Every team in the Shute Shield would love to have a Hamish Dunbar in their side. His impeccable defence, hard ball-carries, and disruption at the breakdown, has caused many issues for the opposition throughout the season across the grades.

8. TED POSTAL: The plethora of experience and knowledge that Ted has, has been priceless for the playing group in both 3rd and 4th grade this year. Having played overseas and interstate, Ted knows the in’s and outs of club rugby. After a run-in with a car in New Caledonia in late 2017 that resulted in a tibula/fibula ankle dislocation, he has been able to find his feet again and enjoy his rugby in the lower grades. Ted’s work at the set-piece – both scrum and lineout – throughout the game is huge, and provides great examples for the younger generation to strive for.

9. DAN CALAVASSY: A late starter to the 3rd grade squad for 2019, ‘Cala’ has embraced our values and standards straight away. His sharp pass off the deck, and ducking and weaving around the breakdown, has caused many teams havoc throughout the season.

10. THEO STRANG: After a small stint with the Panasonic Wild Knights in Japn earlier this year, Theo returned to Sydney University and has covered the halfback and flyhalf position across 2nd and 3rd Grade over the past couple of weeks. Theo’s sense of direction and leadership will put the team in a good spot moving forward.

11. STRATH YEO: The boy from Dunedoo that claims he is Hugh Bowman’s neighbour, has been renting the number eleven jersey for some time now. His hard tough-running style has found him bagging a few meat pies throughout the season. A recent romantic getaway to Bali saw him miss two games, that he is struggling to live down.

12. JOE SCHWAGER: ‘Jezero’ is small but hard, and packs a lot of punch. A number 10’s worst nightmare, he is solid in defence, supplemented by barnstorming carries. ‘Jezero’ causes havoc everywhere he travels, not only on the field but off it as well. If he’s not bypassing his water metre, he’s standing on a bar belting out Blink 182’s ‘I Miss You’, and if that’s not enough, he will be taking bets egged on by his father to steal the lobster out of the tank at Golden Century.

13. DAN POLETTO: Polletto is much more civilised than his counterpart in the centres, and fitting in his rugby around becoming a vet has proved quite challenging. This slog early in the season has paid wonders with his performances improving weekly. Daniel’s kicking game is second-to-none, and if it’s not cleaning up conversions, he is roosting it downfield with altitude to cause the opposition fullback some grief.

14. BEN BULL: Ben has found himself in most of the backline positions in 3rd grade throughout the year, and has settled onto the wing in the second half of the season. The way he injects himself into the line and gets himself over the gainline, puts the team in a great position. Ben loves to dazzle with the touchline, more often than not turning his opposite number inside-out to set the platform for next phase.

15. SAM RENTON: Sam provides a wealth of experience to the 3rd Grade team. His constant input from 15, that most players deem is white noise, is sometimes constructive and more so, off-putting for the opposition. Sam will be one to watch this weekend when he returns the football to the line on the counter-attack.

The 3rd grade replacements will all come from the 4th grade side playing in the JR Henderson Cup final prior to this game. For their equally revealing bios, click here.