One look at the opposing number nine’s for tomorrow’s Intrust Super Shute Shield grand final, tells you not to look away anytime they are within sight of the line. Two of the most potent halfbacks in the game, Jake Gordon and Josh Holmes both have the pace, vision and finishing prowess to strike from anywhere, but in particular off the back of a scrum.

Gordon endured a frustrating year of rotation with the Waratahs – ironically alongside the player who sits behind him on the bench today, Nick Phipps. But he has returned to the Students and unleashed his attacking array in full, grabbing seven tries in seven games, including a trademark double against Northern Suburbs in last week’s semi-final. He also got a brace in last year’s title win over the Rats, and will use that big match experience to help halves partner Ben Hughes settle in to what will be his first time running the cutter in a 1st Grade grand final.

Holmes maintained his incredible try-scoring feats for the Rats this year, with 12 more to add to a tally that must be hard to beat in the history of Shute Shield scrumhalves. He also scored a finals try against Norths back in week one, and bagged another in the 22-21 victory over Uni back in round 13 (as did Gordon). He will be joined in the halves by long-time cohort Hamish Angus, who comes into the decider off the back of an incredible third Ken Catchpole Medal. The fact that he only won by a point – from Holmes – tells you all you need to know about the success of this particular pairing.

There’s only six years between them, but this match-up still plays out in part as the evergreen veteran in 32-year-old Holmes, against the young man in his prime in 26-year-old Gordon. Both hoping to help their teams to a second Premiership with Uni aiming to go back-to-back, and Warringah trying to reclaim the throne they held in 2017. Whoever gets on top in this area of the field, will go a long way towards helping their side home.

Behind the Ruck caught up with them both to gauge their views on the battle ahead.

Jake Gordon: “I can’t speak on behalf of the team for earlier in the year, but from what I’ve seen since I’ve been back it is a team that is constantly trying to improve and are hungry for success. They’re always looking for ways to improve, whether that be through review/preview, or working on individual extras before or after training. They have a coach who constantly continues to test them, and make them the best players they can be.

“They’ve been able to keep much of the same team from last year, but develop more as individuals and as a team this year. We’ve got some great young and exciting backs, and forwards who dominate the set-piece and love the contact. That makes it very easy to play behind as a halfback.”

Josh Holmes: “I think this year has been amazing. We won at Manly and then backed up at Eastwood. We have unearthed players like Ben Marr and Ben Woollett, and seen players like Wes Thomas and Faavae Sila show how good they are. The club is in a really strong place with different opportunities that have arisen for these players. I’ll reflect and say how good is it to see young talent grabbing their opportunities, and I’ve been a part of it.

“Being a part of the last two grand finals, and with a lot of boys moving on, a few of the older players needed to step into their shoes. As a group we wanted to build a team and culture that’s strong, and things from there have been a benefit. ‘Gerrardo’ (head coach Mark Gerrard) has been really good. He always keeps the boys positive, and is all about backing yourself. He has kept the professionalism that DC installed, but given it his own kick.” 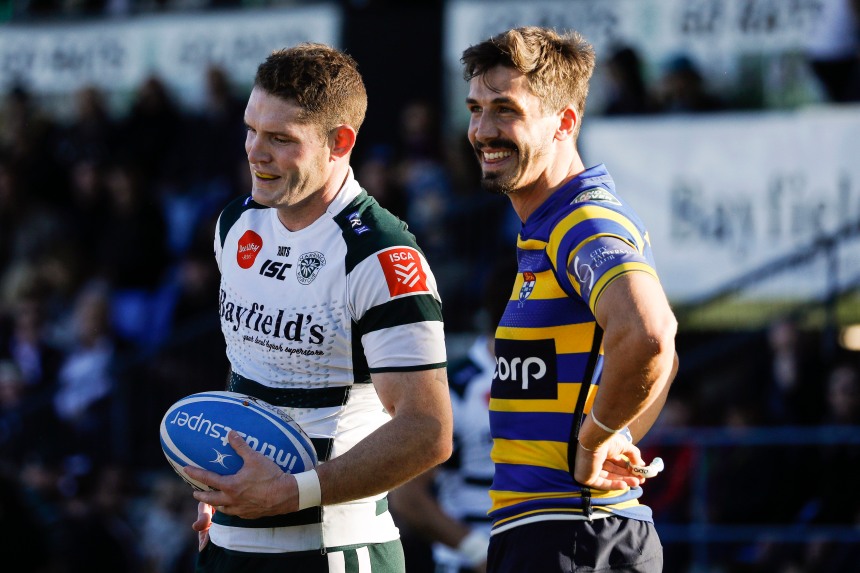 The two halfbacks share a joke during their last clash back in round 13 – Photo: Karen Watson

ON EACH OTHER AND THE HALVES BATTLE:

Josh Holmes: “9’s don’t run into each other that much, and while we will have to focus on him, I just need to focus on our team and make sure I’m doing my part. But I think he is a great 9. He runs and passes really well, is one of the biggest threats for Uni, and led them to the win last year. I’ve watched him for the Tahs and a few Uni games, and he competes for everything so I’ll need to be on my game. Personally I would have Jake on the plane to Japan. He is the best running 9 in Australia, and brings real x-factor to a team. So I think he ranks right up there, and I have a lot of respect for him. He is very good and I think Ben Hughes will feed off his energy.

“There is no secret that I have been lucky this year with not too many bad injuries, and having Dan Tilley as my S&C, he knows how to get the best out of me and puts a plan together for each week. I think as I’ve got older I read the game better, and if I’m finding the chalk I normally just finish off others good play. But I still try to run a lot – maybe not as quickly as I did when I was younger!

“‘Hammo’ (Hamish Angus) is a legend, and to win a 3rd Ken Catchpole Medal shows how good he has been in his career. We have played for so long together now we can read each other, but I think he knows when to slow me down and cool the jets. It’s been awesome to have him outside me for so long now.”

Jake Gordon: “Josh has done a great job in leading the team to three grand finals in a row. He’s a halfback with a lot of experience and is a great runner of the ball. We need to be alert around the ruck on Saturday.

“He and Hamish are a great combination of x-factor and experience. Both have played in a lot of big games and understand what it takes to win them. Josh is always looking for that space around the ruck and the cut-out to his winger flat, while Hamish is directing his team around the park with his great kicking and passing game. I’m expecting the team to look for those two in those pressure moments on the weekend.

“It’s pretty easy five metres out when your scrum is moving forward and all I have to do is put it down, and I’ve just been lucky enough to be in the right place at the right time to score. Not the greatest tries but I’ll take them.

“I’ve played a lot of footy with ‘Hughesy’ (Ben Hughes) before. We’ve played colts together and played 1st grade together in 2016. He’s got a good running game and has great skills. He will lead the team well around the park and I can’t wait to play a grand final with him.”

Josh Holmes streaking away in the win over Manly in round 16 – Photo: Karen Watson

“I’m expecting a really excited and passionate Rats team this weekend, who will be coming for the full 80 minutes. It’s shaping up for a great grand final, and the team and myself can’t wait to get out there.

“It’s been great to get back and play for Uni. They’re a great group of blokes who are constantly pushing one another to get better and improve. I’ve been lucky enough to make some great memories here, and I’m looking forward to making a few more.

Josh Holmes: “At the start of the year we needed to be patient and the season didn’t begin well. But when you have a team with players like ‘Thommo’ (Sam Thomson), Tyson (Davis) and Harry (Jones), and then young kids like Marrsy and Woollett, you can’t help but be excited at what we can do. We also said if we make the finals anything is possible from there, so to be in another grand final is amazing.

“Uni are a great team and still so young. They have dangers all over the field so we need to be on it. But finals are made for you to play the best, and we get the chance this weekend. Last year hurt, and losing a grand final is never going to be forgotten. We want to win for ourselves and also for our community, as they do so much for us with their support.”

Darren Coleman: “A tough assignment, but if Josh can pull out one of his better days he can definitely match it. Nick Phipps’ try-saving ability is worth as many points to Uni as Gordons’ try-scoring.”

To read all of Darren Coleman’s fantastic in-depth analysis of the final, please click here.