Round four of the 2020 Six Nations saw sport play second fiddle to health and safety, as the Ireland v Italy match due to be played in Dublin fell victim to the coronavirus, with the rest of the competition also likely to be put on hold for the foreseeable future.

In the two games that survived, Scotland provided the upset of the tournament by downing the previously unbeaten France 28-17 in Edinburgh, helped by a red mist moment from French prop Mohammed Haoas. While England continued their return to form with a 33-30 victory over Wales, a final score that doesn’t reflect their superiority across the 80 minutes.

Here’s how both clashes played out…

It was a disjointed opening in Edinburgh from a French side that should have been buoyed by the three wins in a row they had enjoyed in the previous weeks. A breakdown penalty gave Romain Ntamack an early look at the posts, but his effort drifted wide of the uprights. Then flanker Francois Cros was shown a yellow card for a dangerous tackle that left Jamie Richie’s head arrowing towards the turf, when it was the clumsy assistance from Paul Willemse that drew the negative outcome, and should have seen the South African-born lock sent to the bin instead.

Ntamack was then accidentally caught by a shoulder from Sam Johnson in a tackle and sent for assessment. And with their talismanic flyhalf MIA for an HIA and Cros still in the bin, Scotland pounced, forcing a scrum penalty and Adam Hastings opening the score.

They had a second three-pointer before the end of the first quarter, skipper Charles Ollivon pinged for not rolling away and Hastings as accurate off the boot as famous father Gavin had been on so many occasions on the same stretch of grass a generation ago.

The visitor’s were struggling to find their feet, with poor discipline keeping their hosts in the ascendancy, and the flow to their game that had been a feature in recent weeks deserting them thus far in the face of some stout Scottish defence.

That situation wasn’t helped by the failure of Ntamack to return to the fray, Matthieu Jalibert now on as his long-term replacement. And while the 21-year-old Bordeaux Begles playmaker is another fine young talent, he doesn’t yet possess the game control exhibited by Ntamack, particularly in this tournament, and you wondered if a little bit of belief just drained away from Les Bleus once his permanent absence was confirmed.

Still 6-0 down after half an hour, and having spent precious little time in the red zone, that seemed to be the case. But if mental fragility is by historical definition ‘so French’, so is their ability to produce something from nothing, and after their first real period of pressure inside the Scottish 22, the previously anonymous Antoine Dupont gave further evidence of his burgeoning genius with a pinpoint cross-field kick for Daman Penaud to dive for the corner.

Jalibert’s expertly executed conversion from the sideline edged France in front 7-6, and suddenly the tails were back up, le coq’s were crowing, and the Grand Slam was back on. That is, until a brain explosion from prop Mohammed Haoas three minutes from half-time changed the whole complexion of the game.

What initially looked like a bit of handbags between Haoas and flanker Richie in backplay, and initiated a melee of around 20 players all pushing, shoving or macho posturing, took a sinister turn when replays showed Haoas had actually landed a right hook flush to Richie’s nose. A stonewall red card, a gift 3pts from in front for Hastings, and Scotland with a 9-7 lead and the prospect of a man advantage for the entire second forty.

But it got even better before they headed to the sheds. With the first half clock in the red, the dazzling footwork of Hastings saw him dance his way past four French defenders from halfway before being hauled down 15 metres out, and three sharp passes wide put Sean Maitland away near the flag to send Murrayfield into raptures. 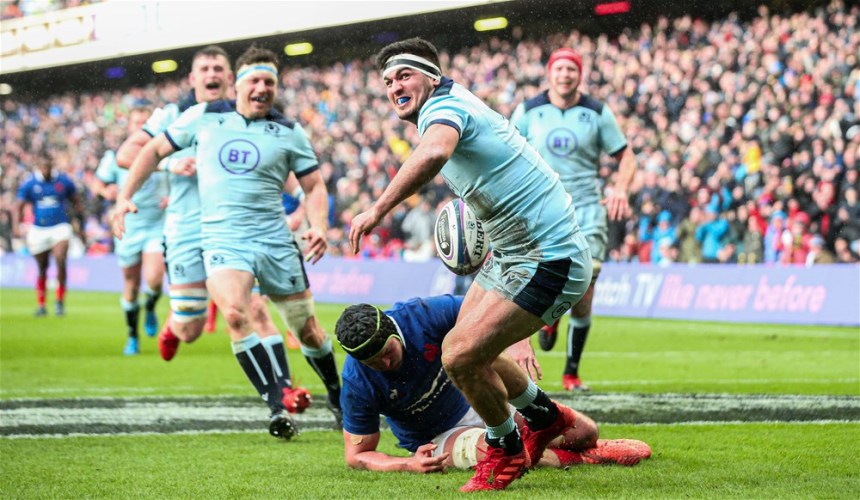 Backed into a corner, the French came out fighting after the break, working themselves into prime position only for excellent work over the ball from poacher-supreme Hamish Watson to keep them at bay. And the failure to put anything on the board came back to bite them just a minute later, as Scotland put together a carbon copy of their first try to open up a two-score lead.

Chris Harris was the catalyst this time, the centre bursting through off a pop pass from Hogg to carry past a fractured French defence and send Ali Hogg scampering away on his inside. The scrumhalf pinned back the ears and went for the posts, only to be felled five metres out. But again they had the numbers and the accuracy to make good on the build-up, Richie and Hastings combining to send Maitland over in the corner for a double.

The sunshine gave way to more typical Edinburgh fare as the game entered the final quarter, driving rain suddenly swirling around the old stadium and decreasing France’s chances of a comeback. Although, they were handed a minor leg-up when a high shot allowed Jalibert to chip away ever so slightly at Scottish confidence for 21-10.

But the hosts were not to be denied, and they pounced on a bit of good fortune a couple of minutes later to strike the match-winning blow. A terrific kick-chase led by captain Hogg forced a lineout on the edge of the opposition 22, but after Stuart McInally’s throw was stolen in the air by the French jumpers, the ball took a wicked bounce back towards the unmarked replacement hooker, who didn’t need a second invitation to race clear of a frustrated Dupont and seal the deal.

With nothing left to lose and time running out, Les Bleus decided to cut loose and play in the manner in which only they can, and it paid immediate dividends. Thomas Ramos ran a clearing kick back over halfway for Fickou to link with Arthur Vincent and onto Jalibert to get them inside the red zone. And after the forwards had rumbled a couple more phases and the newly arrived Demba Bamba skittled a few Scotsmen to open some space, captain Ollivon scooped up to power his way through Watson and find the chalk.

It amounted to no more than a consolation however, Scotland defending manfully as they had all game to rubber stamp a memorable – and much-needed victory. For France, having already disposed of both England and Wales in this tournament, this can only be seen as a major disappointment, and a missed opportunity to go into the final home game against Ireland next week – coronavirus permitting – with a Grand Slam on the line.

England had produced an impressive return to the bruising heights of their World Cup exploits in the previous round against Ireland, and they started in the same vein against Wales, Tom Curry poleaxing Dan Biggar right from the kick-off to set the tone.

A terrific carry from Maro ltoje then got the hosts in prime position, and one well-worked lineout play later – Anthony Watson running an unders line to hit a reverse pass from Curry to step his way over – and they had the lead inside four minutes.

With the wrecking ball that is Manu Tuilagi the go-to man launching brutal assaults at the red wall, England continued to ask all the early questions. But when a rare Welsh attack ended with a knock-on close to the line from George North, an unnecessarily mocking response from Owen Farrell kick-started an unsavoury melee and a ticking off from referee Ben O’Keefe.

The upshot of it all was the England captain being rewarded for his gloating with a penalty to the Welsh, and a gift 3pts for Leigh Halfpenny. But that was cancelled out by an almost equally needless penalty from his opposite number on 15 minutes, Alun Wyn Jones pinged for not rolling away and Farrell restoring the 7pt advantage.

England suffered a setback with the prolific Jonny May failing an HIA, Henry Slade on in his place forcing a reshuffle to Eddie Jones’ backline. And when a highshot on Josh Navidi allowed Halfpenny to make it 10-6 at the end of the first quarter, unlike Ireland a fortnight ago, the visitor’s has survived the early onslaught from those in white without too much damage.

A scrum penalty had England back on the front-foot just after the half hour. Wales defended the lineout drive superbly, but when a nice snipe from Ben Youngs drew a penalty advantage for a high tackle from Ken Owens, Farrell pounced to fire it wide for George Ford to send Elliot Daly over in the corner.

When they were back in similar territory five minutes later however, it took an illegal sacking to bring down the maul, and Farrell punished again off his boot. But a pretty impressive opening 40 from England was spoiled somewhat at the death, when they overplayed their hand instead of kicking it into Row Z, and yet another high shot – this time from ltoje on Biggar – saw the Welsh flyhalf reduce the deficit to 20-9 at the break. 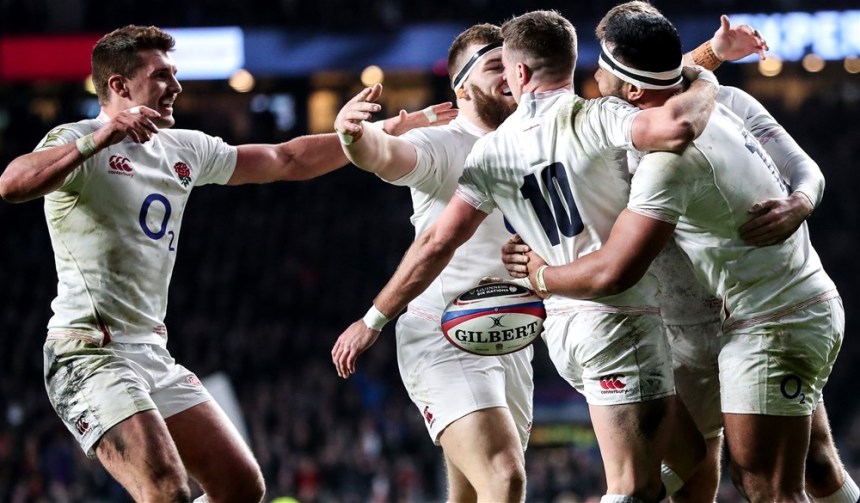 Having stayed intact without enjoying much of the ball, Wales came back out of the sheds to stun the home side with a blistering score inside a minute. The new attacking mantra under coach Wayne Pivac was never more evident, as Nick Tompkins fielded an up’n’under and swapped passes with Navidi, raced away and sent Tomos Williams over halfway, and the halfback had Justin Tipuric in support for the killer pass and a run to the posts. Fantastic counter attacking rugby.

With Welsh momentum suddenly bristling with intent, England were grateful for a turnover penalty won by the effervescent Courtney Lawes over the ball, and the resulting 3pts from Farrell. And when a scrum penalty gifted them another 3pts, this time executed by Ford with Farrell getting treatment in backplay, Welsh discipline had quickly cruelled their exhilarating early score.

Back in their pomp, England began to flex their attacking muscles towards the hour and came up trumps. The impressive Youngs broke the line again and had numbers in support, and when the forwards recycled to suck in Welsh defenders in front of the posts, quick hands wide sent a deserving Tuilagi over for try number three, and a 33-16 advantage.

Back-to-back penalties got Wales inside the 22 with 10 minutes to go. But England’s rearguard was proving a tough nut to crack close to their own line. However, the pressure was sustained enough for a further indiscretion to send Ellis Genge to the bin, and there was worse to come for England.

A wide ball from Biggar gave North a run to the flag, only for Tuilagi to send him into touch with a brutal tackle that didn’t appear to include much in the way of an arm, and ref O’Keefe to issue a red card.

Somehow, the 13 remaining Englishmen managed to thwart the ensuing rolling maul and win a penalty for their efforts. But several scrum resets later, Wales managed to work the extra numbers for Biggar to stretch over to bring it back to a 10pt margin with three to play.

When they took advantage of the extra space again to carve a path upfield for Tipuric to grab his second in the final minute and Biggar added the extras, Wales were incredibly just 3pts behind. But the clock beat their chances of an improbable victory, and in truth, the final scoreboard was somewhat misleading given England’s dominance for large periods of the contest.

France’s surprise loss to Scotland leaves England on top of the ladder by points differential, and needing a bonus point win in Italy to secure the Six Nations title. Quite when that game will be played out however, is anyone’s guess. 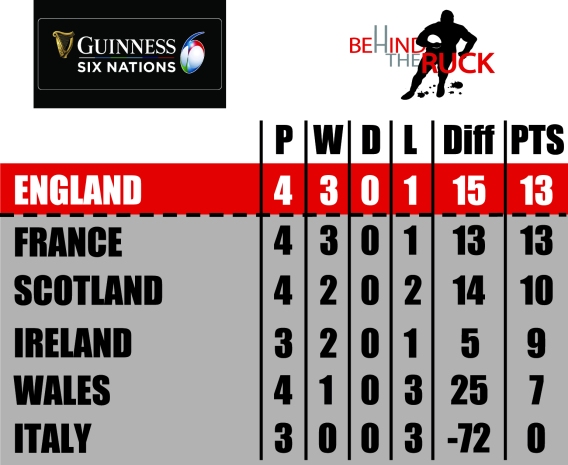