End of an era for Warringah as clinical Woods romp home

It’s officially the end of an era for Warringah, the Rats confirmed to be missing out on finals footy for the first time since 2013 after going down 47-21 to an impressive Eastwood at TG Millner Field last weekend.

Despite an early try for the home side it had been the visitors asking most of the questions with scores level at 7-all after the opening quarter. But a sublime display from rookie flyhalf Tane Edmed paved the way for try machines Matt Gonzalez and Mark Nawaqanitawase to strut their stuff, the prolific pair bagging five between them to take the Woodies almost out to the half century, before a late flurry from the Rats put some semblance of respectability on proceedings.

It was a lightning start for Eastwood, with successive strong carries taking them inside the 22 and earning an early penalty. And after turning down the easy three for a kick to touch the forwards stepped up again to validate the decision, with pick and go’s getting them close enough for Pat Sio to be driven over with just under three minutes on the clock.

Tane Edmed got his kicking stats off to a fine opening with the conversion, but when no.8 Sio spilled the restart cold the Rats were offered an immediate opportunity to test the Woodies defence. However, a knock-on cost them possession and another penalty gifted their hosts the chance to exit without punishment. It was a portent of what would follow.

Both sides struggled for a foothold as they over-played their hand at times in trying to ignite an attack rather than building the phases and earning the right to be expansive, and a litany of spilt pill was the result. But that would also be a harsh inditement of the efforts of the opposing flyhalves in the shape of the talented young Edmed and Ben Marr, whose willingness to take on the line and try something a bit different was laudable.

It was one such maverick moment that almost brought Warringah level, the elusive Marr jinking his way through traffic from his own 10-metre line before racing through and feeding Charlie Tupu off his shoulder. But the pacy winger was snagged by a chasing Tim Anstee before he could find Josh Holmes on his outside for the run home, and Eastwood’s line was left untroubled.

The visitors were warming to their task, and a seismic hit from skipper Sam Ward on Fabian Goodall as he attempted to make tracks up the sideline was a ‘follow me’ moment and then some, with a couple of supporting Rats piling in to force the penalty. Marr kicked to touch for a five-metre lineout and the Rat Pack went to work, driving home a textbook maul for Boyd Killingworth to touch down a touch too easily, and his flyhalf adding the extras to make it all-square at the end of the first quarter.

Having barely crossed the halfway line since opening the scoring the Woodies were in need of reignition, and they got a leg-up straight from the kick-off as the Rats lost their concentration and intensity at a pivotal moment in the contest. A brilliant steal off the floor from prop Rhys Sheriff won back possession from the restart, which allowed Woodies openside Tom Murphy to make inroads into the 22. Speedy service from the ruck from Matt Gonzalez kept them firmly on the front foot with Mark Nawaqanitawase, Sheriff and Jed Gillespie all chiming in with dominant carries, and when the Rats goal-line defence switched off, there was Gonzalez again to snipe over for his eighth of the season and an immediate riposte.

It proved to be a significant momentum changer. Conceding so quickly after working their way back on the scoreboard had Warringah rocked back on their heels and making mistakes as they forced the pass, while Eastwood started to find their rhythm and employ the slow-burn that has served them so well down the years.

A scrum penalty compounded by an offside and then a ruck infringement piggy-backed them back upfield, where they opted for another put-in from a few metres out. When the ball popped out the back Gonzalez was straight onto it to target the blindside and feed the lurking Nawaqanitawase, and having just about got around Tupu before being held, the man they call ‘Marky Mark’ produced an amazing offload as he fell, taking out last man Charlie McKill with a ball back into the grateful arms of his predatory scrumhalf, who gleefully completed a quickfire double.

The Waratahs winger was on the scoresheet himself shortly after as things got even worse for the visitors before the break. A lovely step from Edmed took him through the line and past lock Alexander O’Dell, and after fullback Chris Bell’s unders line was covered off, the flyhalf swiftly switched tack to find Nawaqanitawase in space out wide for a dive to the corner.

The mercurial no.10, who picked up the Dave Dennis Elite Youth Development Player of the Year gong at the 2020 NSW Waratahs awards ceremony during the week, couldn’t pile on the misery with a missed kick from out wide. But a 26-7 advantage as they went to oranges was a handy lead to hold, especially with the Rats needing to play catch-up footy to save their season.

Warringah beefed up their front row within a minute of the second half as the first scrum was called, Rory O’Connor making a popular return to the Shute Shield after a post-Super Rugby hiatus, alongside another former Waratah in the shape of Sam Needs, who is treading a controlled path back from injury. Although their first engagement was short-lived after a contentious penalty was called in favour of the home pack.

The Rats simply needed to score next if they were to find a way back into this contest. Nothing less than a bonus point win would keep their season alive, and that was still reliant on results going their way elsewhere. But it was Eastwood who continued to carry the fight with a greater sense of urgency, profiting from an increasing softness in contact from their opponents that was affording them easy metres and a platform from which their talented backline could cut loose.

Edmed recovered from a nasty-looking bit of friendly fire from Nawaqanitawase that left him briefly floored, to execute an inch-perfect touchfinder into enemy territory after yet another penalty. From there, Gillespie and a rampaging Enoka Muliufi hit it up to interest plenty of green and white jerseys, and when it went down the line for Devan Stoltz to find Goodall, the burly winger was too big and too strong to grab the bonus point fourth try.

If it wasn’t already game over at 33-6, the rubber was well and truly stamped on Warringah’s season just two minutes later. As is often the case when a team is chasing the game, if you leave the back door unlocked and with no-one home sometimes you get burgled, and such was the case when Tyson Davis stepped into first receiver inside the Eastwood 22 and fired a pass wide looking for replacement Guy Rees, only for the alert Nawaqanitawase to intercept and go 80 metres, despite a valiant chase from Davis.

They thought they were in again on 56 minutes. Another break down the right edge saw Nawaqanitawase stretch the legs once more before grubbering infield for Gonzalez to scoop up and claim a hat-trick, only for play to be called back for offside with the scrumhalf deemed to have been in front of the kicker.

The Rats then blew a chance to get back on the scoreboard when Chee-Kam ignored a three-on-one to try and go himself, Chris Bell not buying the dummy and forcing an offload from the floor that ended up safely back in the Woodies in-goal area. And although it took a while for the home side to create another gilt-edged opportunity – and the luxury of giving Gonzalez and Gillespie an early bath for the future battles ahead – the likelihood of them crossing again was more of a case of when, not if.

When it came it was off their most patient and lengthy phase play of the match. They mustered 12 in total from one side of the field to the other and back again, before Edmed took control with a drift inside two defenders that drew a third and left Nawaqanitawase free to complete his hat-trick – that’s five tries in three games for his club side in 2020.

Edmed took his personal tally to 107pts in his rookie season with a sixth successful conversion, and with a 40pt lead and still 10 minutes on the clock, you feared for just how ugly this could get for the Rats. But they’re a proud club, and credit must go to them for not throwing in the towel and fighting to the end when there was little left to play for other than pride.

A bit of hot potato footy preceded the next score with five minutes left, both sides chancing their arm with vastly different agendas and liberally swapping possession as a result. But when the ball finally stuck for more than a few seconds for Chee-Kam to race up the touchline, the winger took the right option this time with a kick infield for Josh Holmes to race through and add to his vintage collection of five-pointers, as he prepares to take his final bow in club rugby.

There was still time for one more consolation, replacement scrumhalf Harry Anderson Brown darting up the middle and under the posts with the Woods already in the sheds to make it 47-21. But this was ultimately a dark day for Warringah to top off a season where they have fallen below the stellar standards they set in recent years. It is the first time they won’t feature in the business end of the comp for seven years, and with Messrs Holmes and Ward hanging up the boots next weekend after the final match of the season against Norths, truly the end of what has been a fantastic period for the club.

For Eastwood, this performance was a reminder of the strengths they possess across the park, and the damage they can do, especially if given a relatively free ride in the contact zone. They will be a hard nut to crack in knockout footy. 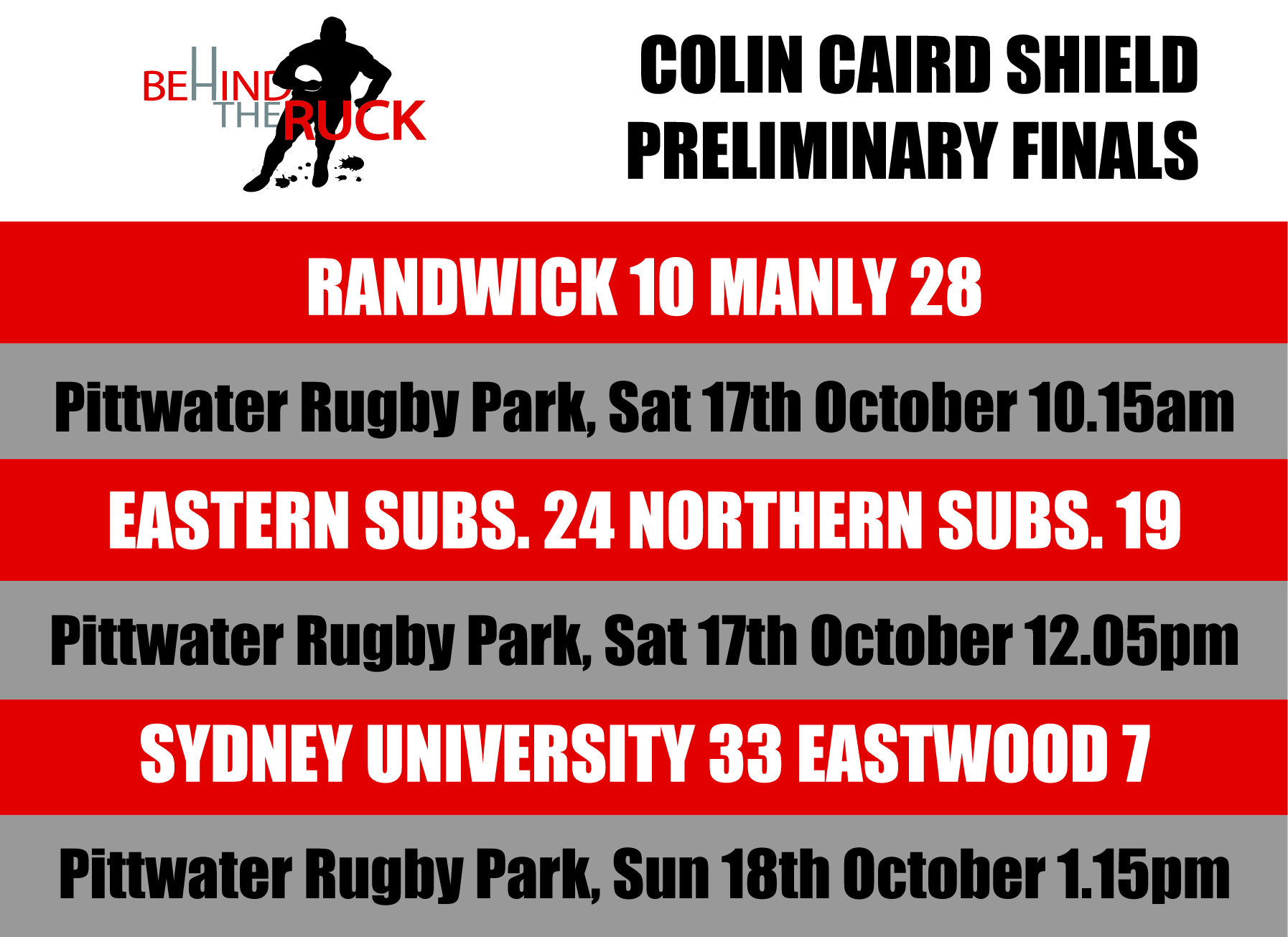 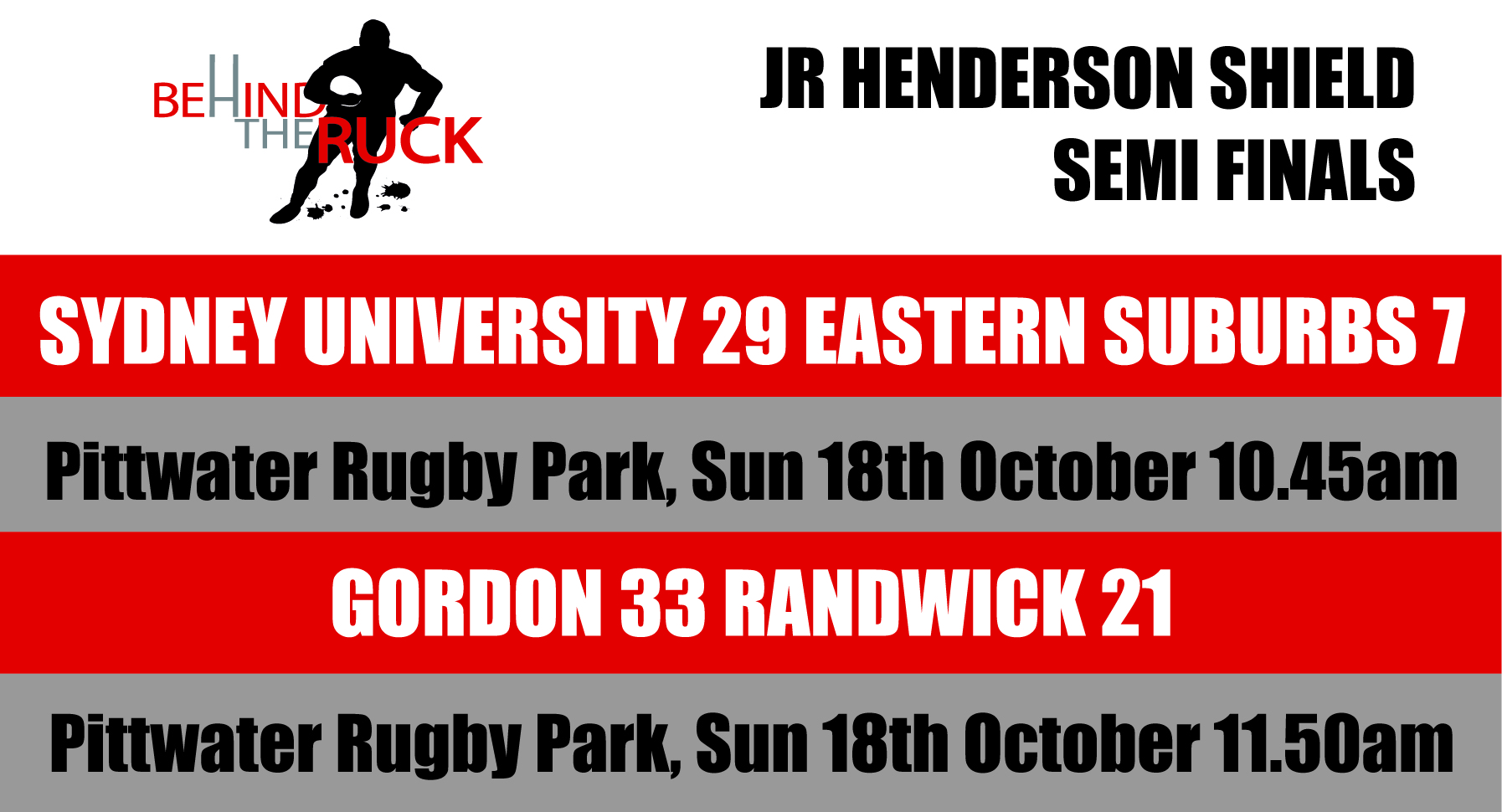