Last Saturday saw one of the biggest upsets in many a Shute Shield season, as eleventh placed Penrith saw off the might of second placed Southern Districts 45-41 at Nepean Rugby Park. In what is fast becoming a watershed year for the boys at the foot of the mountains, they added the scalp of the Rebels to those of Warringah and West Harbour to notch up their fourth victory of 2010, and keep them hot on the heels of Gordon, now only four points ahead.

Head coach Matt Briggs, in his first season with the club and as a head coach, after years of assisting Chris Hickey and Brian Melrose in the top job at Eastwood, was understandably delighted with the win. He felt the key to victory was matching the Rebels’ physicality early on, and building belief from their parity at the tackle contest.

“It was a very physical game with both sides fighting hard for dominance at the breakdown in the first half,” he explained. “The rolling maul try to us in the first 10 minutes from 22 out gave the boys a huge amount of confidence that they could match South’s physically, and given some time with the ball we knew we could cause them a few headaches.”

Despite the physical nature of the match, both sides were able to employ a running game with ball in hand, which saw them share six tries in the first half. A Tawhiri Walsh penalty gave the Emus a 24-19 lead at the break, and that despite Walsh having spent 10 minutes in the sin bin earlier in the half. Briggs says the half-time chat was positive.

“The boys felt that our best was yet to come, and that it was only the penalties we were conceding through being over enthusiastic at the breakdown, that was keeping Souths in the game.” 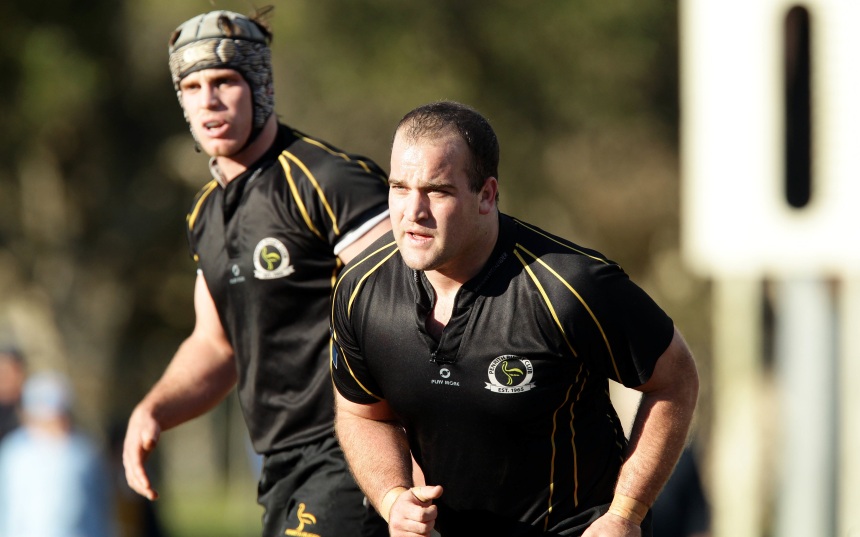 With prop Dave Coventry scoring his second try early in the second half, the Emus’ confidence continued to grow, and their attacking plays found holes on the fringes and right through the centre of the field. But Southern Districts – parading the likes of former Wallaby Nic Henderson, and current and future Waratahs in Kane Douglas and Brackin Karauria-Henry respectively – are made of sterner stuff this year, and they fought back to lead 41-33 with 15 minutes to go.

However, the Emus were not to be outdone. Tries to half back Sikuti Vunipola and replacement flanker Rob Carlson gave them a 4pt buffer with five minutes left on the clock, and it was left to an awesome defensive effort to finish the job. Briggs could only wax lyrical about the effort of his troops in keeping out the Rebels – particularly his pack.

“The boys defended brilliantly and caused three significant turnovers in our 22 late in the game. But the highlight from the forwards was a tighthead on halfway as the bell rang, with Souths no. 6 putting his hand in the scrum to try and retain the ball. Penalty to us, kicked into touch, game over!

“It was a great day for the club. Beating a top side in the competition was one of our goals this year, and with a little more focus on areas for improvement, we might see a couple more wins this year too.”

Souths lock Kane Douglas was on the losing side for a change – Photo: SPA Images

The result will certainly send shivers around the competition, particularly for any side yet to visit Nepean Rugby Park, and that home fortress mentality is something Briggs has been keen to cultivate since he took over. His wish is for Nepean to become as intimidating a ground as Granville Park has been over the years for local rivals Parramatta. A proven graveyard for many a visiting team, no matter how high profile.

“I remember when I was playing grade football, we used to refer to Parramatta’s spiritual home as ‘Death Valley’,” Briggs reflects. “I’ve spoken to people that played at Parramatta, including David Mann, who played over 200 grade games – most of those in 1st Grade, and he told me that if you can build that cauldron, that house that people don’t want to come and play at, there is a psychological aspect to the game.

“So yes, absolutely we want to make life miserable and tough for any side that comes out here. I don’t think it’s just the travel that sides have to cope with, it’s our will to win too. We are protecting our own turf and that’s a nice little edge to have, absolutely.”

Skipper Luke Cross agrees, and points to the club’s move back to their natural home this year after a season’s flirtation at St Marys Leagues Stadium, as being crucial.

“At the end of the day, I don’t think people like travelling out here,” he says. “Last year they had the luxury of playing out at St Marys, which is a nice pitch with a little stadium so it’s nice to play at. And I think for travelling teams it wasn’t such an away game, and for us it was half an away game and it wasn’t traditionally our home. I think reverting back here as our home ground is a good thing. It starts to build a culture and at the end of the day, we get bums on seats and we’re pleased to be out here.”

Skipper Luke Cross is happy the Emus are back at Nepean Rugby Park this year – Photo: SPA Images

There has however, been one downside to the club’s improved fortunes this year.

“I think we won two games last year and from two games you don’t get to learn the team song,” explains Cross. “You don’t really go home and run your eyes over it, so for the first two victories this year we had to plaster an A4 sheet up on the wall so all the boys knew the words!”

If the Emus can maintain their upward curve, those words may well be unforgettable before long.