It may not have been the sort of comeback written in the stars – solid if unspectacular would be the best description – but Rob Horne’s return to competitive rugby was good enough to have Robbie Deans and Wallaby fans everywhere, nervously anticipating the 21-year-old centre’s availability for the upcoming World Cup.

Horne completed eighty minutes for his club side Southern Districts on Saturday, in what was his first hit-out since re-injuring a previously damaged elbow in Round Three of the 2011 Super Rugby season against the Crusaders. Although the match against Gordon in Sydney’s Shute Shield proved to be one of the most exciting of the season – Souths finally outgunning a dogged Gordon 43-35 in an eleven-try exhibition of both positive rugby, and poor defence – he didn’t really see enough ball with which to make a truly candid assessment.

With both packs going hammer and tong at each other, his involvement was reduced to that of a spectator for large parts of the game, with brief insertions into the fray as the ball moved out to the channels. He admitted afterwards that while it wasn’t exactly the type of game to showcase his talents, it was just nice to be back on the park:

“There were a few holes about out there but that’s just the nature of how some games go. There were a lot of points scored but it was a bit of a stop/start game as well and it was pretty tough to get into any rhythm. In saying that, it was just good to play for Southern Districts again. I love playing for them, I was a junior here and it’s a good feeling pulling on the colours again.”

Most importantly, he came through the 80 minutes unscathed and when he was involved, he certainly didn’t shy away from contact once the confidence in that fragile elbow had fully returned. A few gingerly approached initial hit-ups as he – understandably, but perhaps unwittingly – kept his heavily strapped right arm slightly hesitant in it’s actions, were soon replaced by a player simply revelling in getting in amongst it whenever possible. The post-match injury report was a positive one.

“That first bit of contact is the one you’re looking for and once you get that, everything else sort of looks after itself,” he confirmed. “But I just wanted to get a few touches today. The elbow stood up pretty well, the lungs were struggling a bit but it was good to play 80. That’s what I wanted out of it, and I got that.” 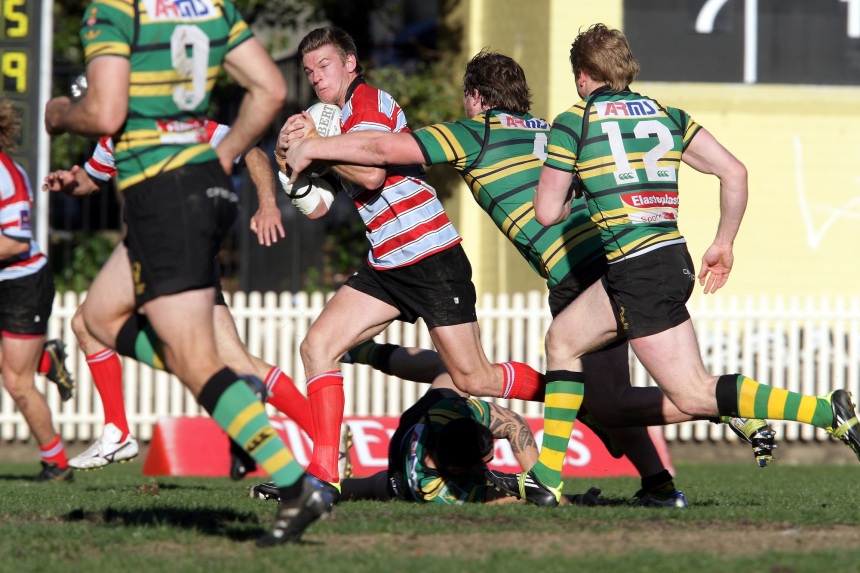 Horne didn’t see much ball on his return to action against Gordon – Photo: SPA Images

A terrible run of injuries has cruelled, not only Horne’s chances of assisting the NSW Waratahs failed title challenges in the last two seasons, but also the chance to add to the six Wallaby caps he has to his name. Despite the impressive form of current starting midfield duo, Adam Ashley-Cooper and the rising star of Australian rugby Pat McCabe, it would be churlish to suggest that a fully fit Horne wouldn’t be pretty close to the forefront of selection with his hard running, straight lines and ferocious defence.

Robbie Deans is a confirmed fan, enough so to take time out from the Wallabies pre-Bledisloe Cup Gold Coast camp to check out his comeback in person at Chatswood Oval on Saturday afternoon. With Horne, Tatafu Polota-Nau, Wycliff Palu and the lazarus-like potential return of Benn Robinson on the horizon, an already promising looking picture for Australia eight weeks out from hostilities in New Zealand, is starting to look even rosier.

The player himself wouldn’t be drawn on such speculation – one swallow doesn’t make a summer and one game certainly doesn’t make a World Cup spot. But he has been a part of the squad in sunny Queensland this week working on some much needed fitness levels.

“I’ve been in camp all week and it’s been pretty heavy on the legs, and then I got in [to Sydney] on Thursday night and had a bit of a runaround with the guys and played today. There’s nothing like playing actual football, you can train all you want but until you’re out there, you don’t really know where you’re at.

“The boys go away on tour now and I’ll be playing club football and hopefully, get some match fitness. That’s all I can do, the rest is out of my hands.”

The good news is that, with finals football only five weeks away and a plethora of returning Super Rugby stars bolstering the club rugby ranks, the games Horne will hopefully play a part in will be both physical, and of a relatively high quality. Southern Districts’ season is hanging by a thread, one more defeat will likely end their interest for this year and with the next three weeks bringing match-ups against three of the best sides in the competition – Sydney University, Randwick and Manly – Horne will receive the toughest challenges available to help prove his worth.

Wallaby fans everywhere will have their fingers crossed that not only does he come through those challenges completely intact, but that they help to lift Horne back up to somewhere near his optimum capabilities in time for the World Cup kick-off. He may yet prove to be a valuable piece in Australia’s World Cup winning jigsaw puzzle.