The challenge for Parramatta in 2013 is to back-up the groundbreaking success they achieved in 2012. Having reached their first finals series since 1991, the desire for further progress is strong throughout the club but consolidation of their new found status as a serious player in the Shute Shield competition is paramount.

To assist with that challenge, coach Glen Christini brought in some new blood in the off-season and in Dan Rawaqa, he’s not only added someone with experience and an international pedigree, he’s raised the Two Blues X-factor to a whole new level.

“He’s just a freakish talent,” enthuses Christini. “He’s got x-factor, the skill set is fantastic and he’s a great footballer.”

Having represented Fiji at both test and Sevens levels, Rawaqa – or Ratu Maravunawasawasa to give him his full title! – spent the last two seasons in France but couldn’t settle. His Uncle happens to live across the road from Merrylands RSL Oval and the rest is history.

“I didn’t know anything about the club until I played against Southern Districts in a trial match,” he explains. “Even though we lost, I knew this team would be a team to beat if we worked together. I enjoy Parra’s running game and with so many brothers from the Pacific Islands here, it’s just like playing at home.”

After five rounds, he’s racked up 54pts and three tries and has been a highlight in an already intriguing Shute Shield season. His footwork, sleight of hand and offload ability opens up extra points of attack for Parra and they’ve also benefited from his relaxed approach to the game. It’s those qualities that Christini feels will be pivotal when push comes to shove.

“He brings that experience and calmness and he gives us options outside and inside,” he says. “Definitely in those big games, guys like that will bring us home.”

A policeman by day back home in Fiji, don’t expect to see Rawaqa padding the beat around Sydney anytime soon. “I don’t like guns,” he explains. “We don’t carry guns in Fiji!” 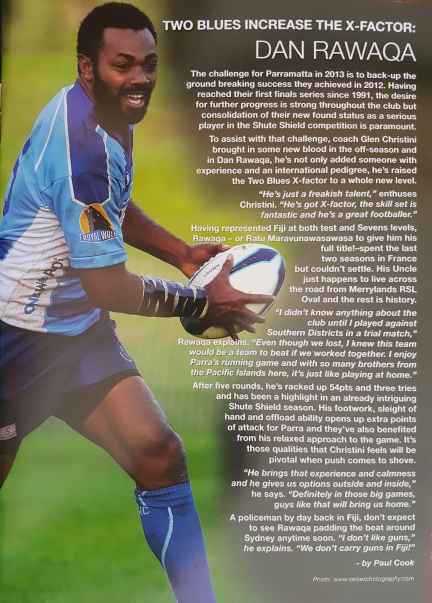