Labour of Love: Stiles determined to revive his treasured Reds

Take a look at the Queensland Reds’ Super Rugby record since the competition’s inception back in 1996, and the term ‘peaks and troughs’ springs to mind. Three top four finishes in the early years of the then Super 12, and three subsequent semi-final losses, preceded a gradual decline over the next eight years that ended in 2009 with a fourth successive placing in the bottom three.

The Ewen McKenzie era triggered a seismic reversal of fortune. The former head coach led a revamped Reds to finals footy in three of his four years at the helm, culminating in 2011’s memorable triumph over the Crusaders at Suncorp Stadium, and an inaugural Super Rugby title.

But having reignited the passions of the Queensland rugby fraternity to a point where they were averaging over 34,000 fans for their home games, the three seasons since McKenzie departed for a turbulent tenure with the national side, have seen a return to the lower reaches of the ladder, and the faithful have drifted away.

Only 14,000 turned out to witness a 31-28 loss to the Rebels in the final game at Suncorp last year. So how did they fall so far, so fast, and how do they go about turning it around?

The man handed that task is Nick Stiles, and when you talk about passionate Queensland rugby people, he’d be a flag bearer. Born in Melbourne but proudly raised in Brisbane, Stiles has been a prominent figure in the state’s rugby history for over 20 years having debuted at loosehead with the Queensland schoolboys side back in 1991 and gone on to captain the Reds in 2004.

After 68 Super Rugby appearances and 12 Wallaby caps, he bit the coaching bug in retirement and set off on a journey that has taken him from Brisbane club rugby to Japan, the Western Force and a spiritual return home to his beloved Reds as forwards coach in 2014. Two hugely successful years running the Brisbane City side in the NRC raised his profile even further, and after an admittedly ‘difficult’ experience last year as interim co-coach with Matt O’Connor following the sacking of Richard Graham, it is to Stiles that the organisation has looked to in his own right to kickstart the revival. And he couldn’t be happier about it.

“It is an absolutely massive honour,” he told Rugby News earlier this week. “I grew up supporting the Reds, I grew up wanting to play for the Reds, I know the history of this organisation and I’ve got a passion for it, and I knew at some point in time I wanted to coach here because it means so much to me. I felt I was ready to be a head coach, that’s why I applied for it, and I was totally honoured to receive the position. I understand the place and I understand how important it is for the state to be strong.” 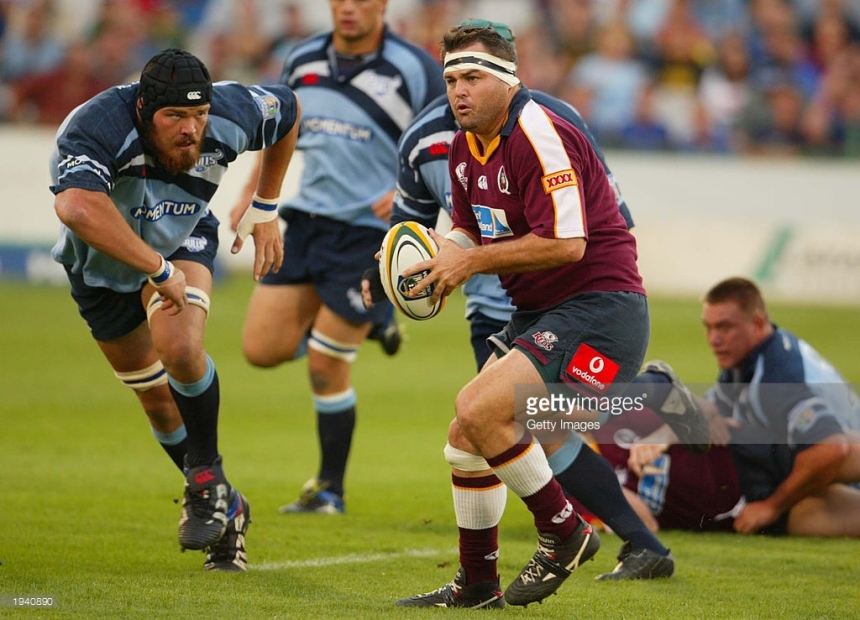 ‘Back in my day!’ – Loosehead Stiles charges at the Bulls

From the outside looking in, the emotions didn’t appear to be quite as positive in the coaches box for the majority of 2016, as Stiles and O’Connor battled to turn around a side that wasn’t truly theirs, and one clearly lacking in both confidence and experience.

“Both of us were put into a situation that wasn’t ideal,” understates Stiles. “Two games in, the head coach is sacked and we became co-coaches. I understand why they did that because it wasn’t really fair on either of us to say that one of us was head coach that early into a season – but was it ideal? No it wasn’t, and for both of us, the team that we were coaching wasn’t the team that we had put together.

“It was something we both got on with and were both professional around how we went about it, and tried to the best job we could in what was an unusual situation. Twelve months down the track, I’d like to think we’re a much better squad with a much better vibe amongst the group, and a team that are really excited about attacking a new season.”

The first thing Stiles did after being handed the complete set of reins was go about recalibrating the way the team played, based around the clearly abundant skill sets that he had at his disposal. Talents that he felt had been constrained by a tactical strait-jacket for too long.

“In hindsight, the attacking structures that we were playing just didn’t suit the playing group,” he reveals. “The way we were trying to play the game was a throwback to the 2000’s, very structured with sequenced plays, and the game has moved on from that. As a result, I don’t think the group fully understood what we were trying to do and there was a lot of new knowledge each week, which limited their availability to just go out and play rugby and execute their skills.

“The Highlanders game (the Reds won 28-27) probably showed the best of us and what we are capable of. We beat the defending champions and we played some exceptional football. But what we did that night was not follow the structured patterns that we had, it was about offloads, line breaks, players in support – a more open style of expansive football. It was about using the skill set of guys like Samu Kerevi – naturally gifted footballers.

“We’ve got to provide a framework for these players to be able to just play rugby. You still need structure and some shape but not too much that they are going into a game mentally overthinking things. We did that in the NRC, played a simple game pattern and style, and we’re trying to replicate that in Super Rugby this year so we can use our skills, and we can use our ability and our talent to just play the game.”

Much of the talent to which Stiles refers to came through under his watch with Brisbane City. Two titles in two years off the back of 18 wins in 20 games is a glowing legacy of the success he achieved with a young group. But while the graduation to the Reds ranks of players such as Kerevi, Sam Talakai, Chris Kuridrani, Andrew Ready, Sef Fagaase, Adam Korczyk and Jake McIntyre over the last couple of seasons, has brought an influx of potential to a squad understandably hit by the departures of Will Genia, James Horwill and Quade Cooper over the same period, it also left them somewhat short-changed in the experience department.

“If you look back at when the Reds won the competition in 2011, we lost our way a little bit when the national academies came in, in terms of retaining our best young players,” Stiles explains. “They didn’t have that identity with the Reds, so we’ve learned from that and used the NRC as an opportunity to sign up our best young talent. But it did mean that they were all very young and inexperienced, and Super Rugby is a tough body, old man sport. We knew it would be hard for a period of time but that if we could keep all those best young players, let them physically develop, and also bring back guys like Stephen Moore, Quade Cooper and George Smith, that we’d have a really good squad.

“People laugh when you say ‘Back in my day’ but it’s true. When I was playing as a young kid there were only two or three sides in Australia and no overseas opportunities, so the depth in the state teams was very strong. They had lots of these really senior, experienced footballers and what you learned off them was ten-fold to what a coach ever taught you. So I was really keen to get those senior guys back because what they can pass on to the younger group will set them up for a long time.

“I’m sure some people are asking why we brought Stephen Moore back when young Andrew Ready has shown so much promise. But he’s still in the early days of his career with a lot of things still to improve on, and having the Wallaby captain, as a 34-year-old, showing him what professionalism is all about, is just invaluable.”

There has also been a clear focus on improved fitness and the moulding of a side with an edge to it – in both body and mind. And to that end, utilising the input of Brad Thorn – who will also coach the Queensland Under 20’s this year – was a no-brainer.

“I know everyone says they’ve worked the players hard in pre-season but we’ve really pushed these guys into some dark places,” says Stiles. “We just haven’t been fit enough and strong enough in the past and the work Thorny put them through the last four months was just exceptional. It’s created a set of players that are hungry, physically tougher and mentally tougher, and you need to be in Super Rugby because it’s just so hard to win every week.

“They’re going to be a side that is willing to compete, and that comes from an internal drive amongst the playing group. Everyone talks about culture and what is culture but the best way to measure it is whether you have a team that is prepared to defend for each other, because that comes from heart and from toughness. We’ve gone out there and worked bloody hard together and done hours and hours of brutal training, that’s our bond.

“I was really pleased when we played the Rebels in last week’s final trial that we only had one try against us. Our ability to work on the inside and protect team mates by working together to cover up any mistakes when needed, just showed a team that really wanted to defend. You can talk technically about folding patterns and all your systems around defence but what impressed me the most in that game was our desire to get up off the line, absolutely whack the opposition and intimidate them with physicality, and that just hasn’t been a part of our game for years. That’s what I want the fans to go away from a game thinking. Yes they saw an attacking team, but also one that got dirty in the trenches for each other.”

Which should go a long way towards bringing them back in their droves again?

“I’ve got confidence in this squad we’ve put together, I’ve got confidence in the staff around me and it’s something I relish, the challenge of getting the Queensland Reds back to being a dominant side again. The desire in the Queensland rugby public up here is incredible, they’re just so desperate to see us compete again, and that’s a responsibility and a position that I treasure. The chance to lead this group forward and hopefully, dig ourselves out of what’s been a pretty big hole for a few years now.

“It’s a tough start to the year in terms of the draw but they’re all hard games and I’m just happy that we’ve got a home game against the Sharks first off the bat. It’s an opportunity for us to really re-engage with the fans, to come out in the first home game and put on a performance that will make them proud, and make them come back again.”