Langford 7s Day 2: Aussie girls back in the groove to claim vital silver

They only just fell short at the final hurdle, with a gallant 4pt loss to reigning champions New Zealand in the Cup Final their only defeat of the tournament. But the Australian Women’s Sevens team have put together arguably their best weekend of footy of the season in Langford, Canada, picking up a silver medal and crucial World Series points to go towards their automatic qualification for the 2020 Olympic Games in Tokyo.

Having come through unbeaten in day one’s Pool stages, the Aussie girls saw off Russia (31-12) and France (26-19) in the knockout rounds to book their place in the title decider against the series leaders. But despite testing their trans-Tasman rivals to the limit, the Black Ferns held on to win 21-17, and record their fourth victory of the current World Series.

“I’m really proud of our squad’s efforts across the three matches today,” said head coach John Manenti. “We had three tough games and were tested by Russia and France on the way to playing in the Cup Final.

“I was really impressed with how we adapted in differing situations when we were tested, and the team found ways to get over the line when required. The final against New Zealand was really tough, but we showed that we can test New Zealand across the park. New Zealand showed their class once again in the final and deserve their victory.

“We showed in Canada that this team is really heading in the right direction and we have claimed some valuable Series points.” 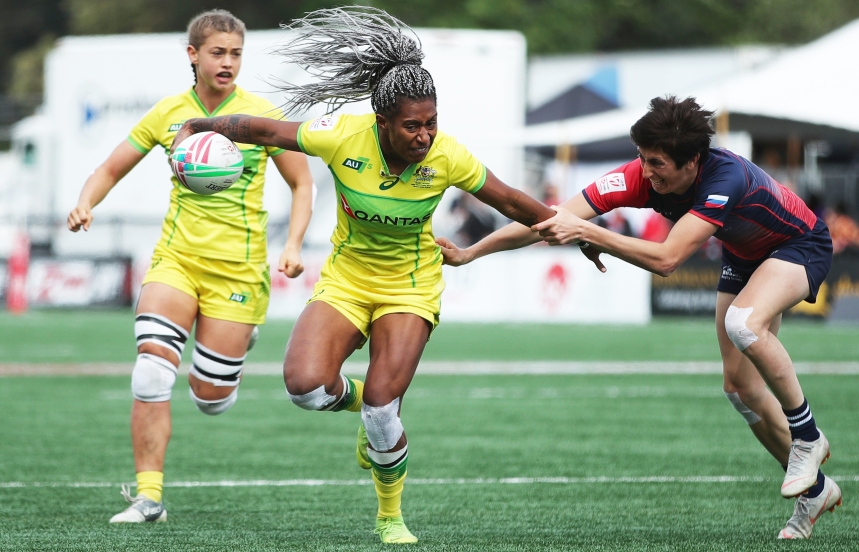 Ellia Green continued where she left off on day one – Photo: Mike Lee @ KLC fotos for World Rugby

First-up in the Quarter-Finals were Russia, a team that Australia last lost to at the same stage in Langford back in 2015. But an upset was on the cards when a looping pass from Elena Zdrokova sent Baizat Khamidova away down the right and over for the opener.

Russia’s defence was proving to be a tough nut to crack, as time and again an Australian attack floundered under their opponent’s physicality in the tackle. But they persevered, and after continually asking questions for five minutes, co-captain Sharni Williams led the way when she picked a gap through a tiring line to get her side level.

The first half exertions took their toll on the Russians after the break, as the persistent green and gold wave bearing down on them gradually began to pay dividends. Ellia Green was the star turn on day one for the Aussies, and she was the first to profit when she jinked her way around four defenders for her sixth try of the tournament. And after a terrific restart the Aussies were soon in again, building phases before finding Green out wide, and Charlotte Caslick on hand to finish off their good work to open up a 17-5 lead.

Russia hit back when a determined Kristina Seredina went over from a metre, having been felled just short with her initial surge. But it was to be the briefest of ripostes, Emma Sykes the catalyst this time for the Aussies with a dummy to make metres up the touchline, before putting the supporting Sariah Paki away.

The explosive Green almost broke through for another as the Russians struggled to contain her. But it was Emma Tonegato that rubber-stamped a place in the semi-finals, a quick-tap penalty and surge from Caslick creating the opportunity for her team mate to claim her 98th career try. 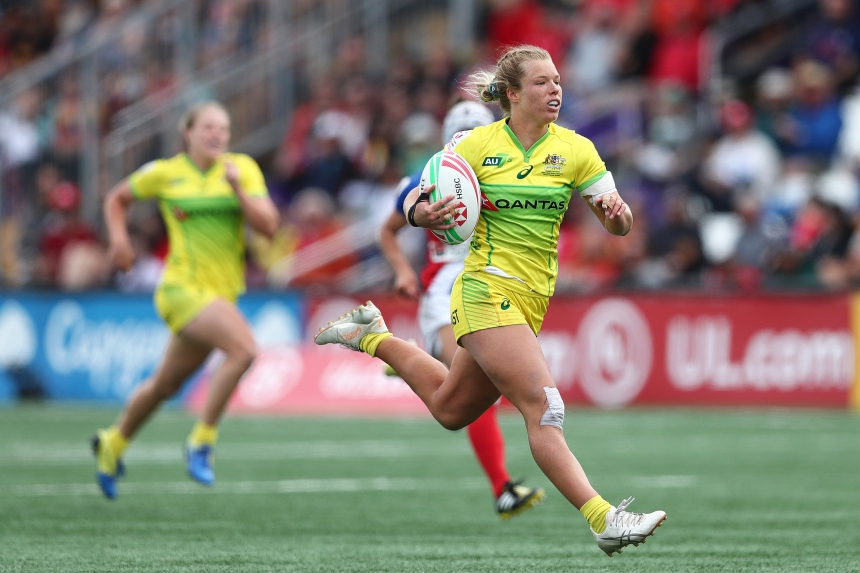 The sub-plot to the semi-final clash with France was the relative positions of the two sides on the World Series ladder. Australia were 4th and the French one place behind in 5th, with both knowing that only the top four at the end of the Series will be awarded automatic qualification for Tokyo. So crucial points, as well as a spot in the Cup Final, were on offer.

Things couldn’t have started any better for the Aussies with Sam Treherne punishing a French error to score off the kick-off, Shannon Izar failing to ground the ball as she chased back, and Treherne on hand to pounce. But France hit back immediately, a superb try-saver from Caslick to thwart Anne-Cécile Ciofani, not enough to stop Camille Grassineau arriving to finish things off.

Les Bleus were then ahead when Carla Niesen picked a brilliant line from Jade Le Pesq to send her under the posts, but any Aussie nerves were soon calmed by a quickfire double from the brilliant Tonegato.

Her first came after a loose ball was gathered in and sent wide by Alicia Quirk, and she was on hand to race away for try no.99. And she claimed a memorable century shortly after the restart with a wonderful individual effort, stepping inside and out to see off two French tacklers, before bursting into space for a 21-12 half-time advantage.

Quirk was on the scoresheet herself in the second half as Australia continued to share the tries around, plucking the ball from the breakdown to target the blindside and outpace the chasers. And they should have had another when a counter from Paki was recycled for Tonegato, but for once she spilled it with the line – and a hat-trick – begging.

France had the last say, Caroline Drouin taking advantage of a knock-on to run in a consolation – despite missing a boot! But the spoils were already Australia’s, and another seismic encounter with their rivals across the ditch awaited, to see who would be crowned tournament champions. 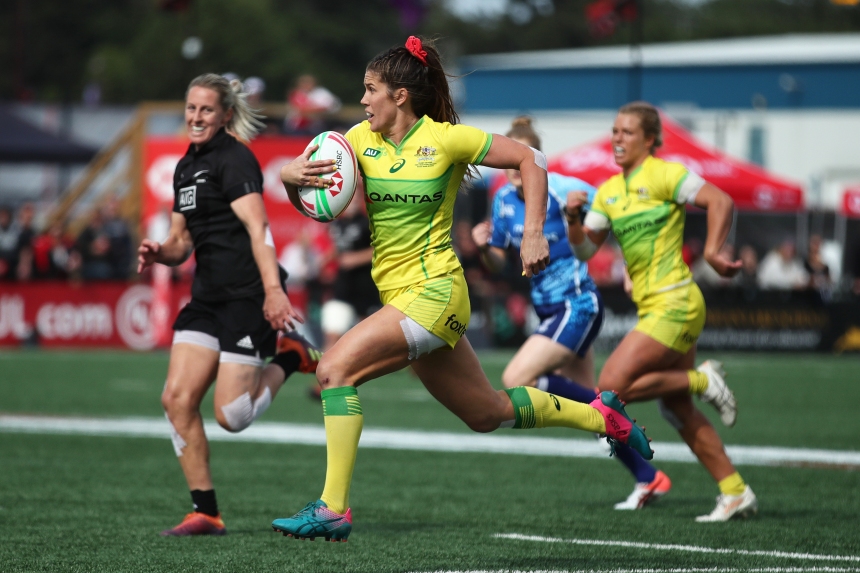 The Cup Final was a repeat of the title decider played in Sydney back in February, and at the same venue in Langford last year. New Zealand were victors on both occasions, and set about continuing that trend with an early assault from Ruby Tui on the Australian 22. But when Niall Williams took possession, she was summarily flattened by a monstrous hit from the fired-up Ellia Green.

And the ‘Green Machine’ was just as devastating in attack early on as she was in defence, streaking away down the left flank shortly after to outpace both Michaela Blyde and Tyla Nathan-Wong, and cross for the opener.

The classy Nathan-Wong wasn’t to be outdone for long, a lovely dummy opening up the Aussie defence for skipper Sarah Hirini to hit an inside line and go under the posts. And the playmaker was at it again soon after, a lovely switch-play putting Williams through a hole for the Black Ferns’ second.

But Australia weren’t going away any time soon, and they struck again before half-time as the pulsating contest continued to ebb and flow. Mahalia Murphy did well to take the restart, and after biding their time in their own half waiting for an opportunity, Caslick took it with both hands, slicing through to create an overlap, and with Tonegato in support to claim another five-pointer. 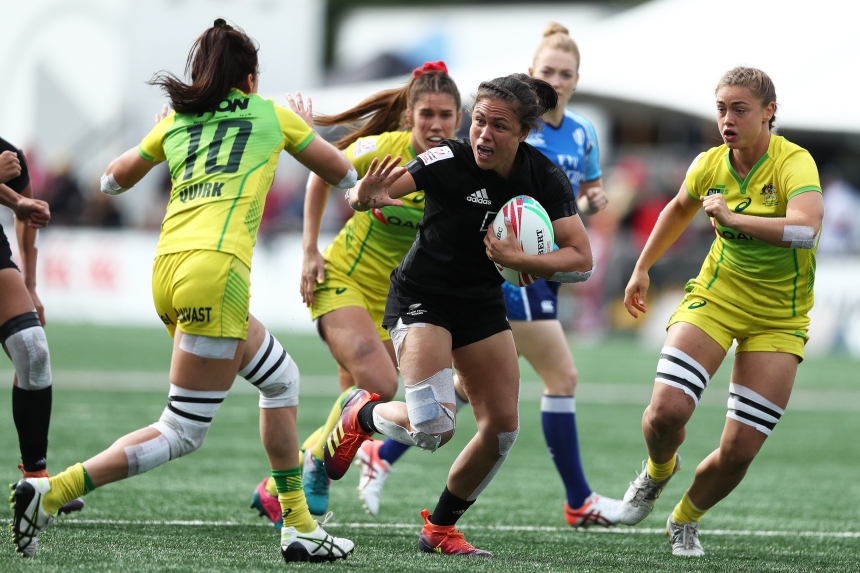 Two missed conversions were the only difference as the two teams began the second half with New Zealand 14-10 ahead. But they didn’t take long to extend their lead, the ubiquitous Nathan-Wong on the end of some fine work from her captain Hirini to see off Emma Sykes and cross the chalk.

The Black Ferns went in search of another, Williams knocking-on with the line in sight as they pinned Australia back inside their own 22. But a clearing kick downfield gave Ellia Green a chance to chase and apply pressure, and she earned a penalty for her efforts. When they subsequently coughed up possession it looked like a rare opportunity to create something had gone begging, only for a wayward pass from Williams to be picked off by Green to make it 21-17 with just seconds remaining.

But that was to be their last shot across the bow, New Zealand earning a scrum from the restart, and duly putting the ball over the sideline to lift yet another trophy, and maintain bragging rights over their near-neighbours.

As a result, they cement their position at the top of the World Series ladder with 92pts, while the gallant silver medal performance from Australia sees them strengthen their hold on 4th place in the rankings with a 14pt lead over France. It also puts them right on the shoulder of both the USA and Canada with one round remaining in Biarritz, France, to be played next month. 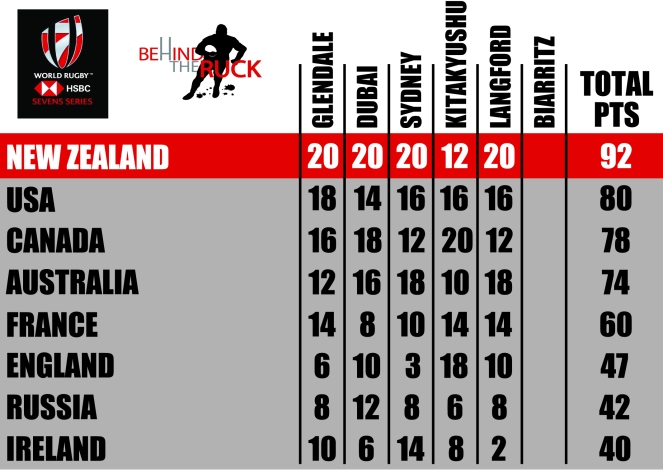