Six Nations’ denouement is a tonic for Gatland’s Lions

If he’s able to put his understandable frustration at Wales’ misfiring efforts thus far to one side, British and Irish Lions head coach Warren Gatland must be licking his lips in anticipation at the bevy of talent at his disposal in this year’s Six Nations.

Having stepped aside from his duties with the Welsh for a season to focus all his efforts on the upcoming tour of New Zealand this June/July, Gatland must be revelling at the level of performance being produced by a large percentage of those players in his likely initial selection plans. What must be even more heart-warming for the kiwi is the number of players from outside that band of ‘likely lads’ that are also putting their hands up for consideration.

Conor Murray and Johnny Sexton from Ireland; Stuart Hogg for Scotland; Sam Warburton and Alun-Wyn Jones for Wales and England’s Ben Youngs, Dan Cole and Owen Farrell – all previous tourists under Gatland in 2013 – have shown just about enough to warrant their place on the plane to the Shaky Isles this time around. But the emergence of CJ Stander and Garry Ringrose (IRE), Jonny Gray and Finn Russell (SCO), Ross Moriarty and Scott Williams (WAL) and Elliot Daly and Nathan Hughes (ENG) to name but a few, has given Gatland and his selection panel plenty to think about ahead of the final squad announcement on April 19th.

Three rounds in and the introduction of bonus points for the first time in Six Nations history seems to have had the desired effect, with most of the nine clashes to this point illustrating a desire from all teams to play with ball in hand and adopt an ‘attack-first’ mentality. The average points per match is 43.6, compared with 37 in 2016, while the total number of tries has also risen from 30 to 37.

Of course, one mitigating factor in those stats was the early form of Italy, who conceded a whopping 12 tries and 96pts in their opening two matches against Wales and Ireland respectively. Hence the need to stem the tide when they met England at Twickenham a fortnight ago, a match which will go down in history for ‘ruck-gate’ and no doubt lead to a tweaking of the laws following the Azzurri’s innovative, but fairly unsporting tactics, to stifle their opponents.

Having stumbled across the line against a rejuvenated France in round one (19-16), and hung onto the ropes for large parts of the clash with Wales in Cardiff in round two before landing a knockout blow as the bell rang (21-16), Jones had called for his charges to take Italy ‘to the cleaners’. But despite eventually – and worryingly slowly – figuring out a way around the non-existent rucks to rack up a 36-15 bonus point win, they yet again flattered to deceive in terms of overall performance.

That they stand on top of the table with 13pts from a possible 15 in spite of playing well within themselves, is perhaps a more worrying reality for everyone else than it is for England. Indeed, a 17-match winning streak does not come by luck alone and while the fluidity in attack, starch in defence and reliability at the set-piece have been spasmodic across 240 minutes of rugby, Jones has fostered a side with genuine doggedness that simply keep finding ways to win when the chips are down.

We should factor in the injury-enforced absences of the explosive Vunipola brothers – Billy and Mako, the combative efforts of Chris Robshaw and George Kruis, and the battering ram that is Manu Tuilagi. But that has in turn allowed Joe Launchbury and Courtney Lawes to re-establish their test credentials, while opening the door for the likes of Matt Mullan, Ben Te’o and the aforementioned Hughes and Daly to put their cases forward for long-term selection.

It also forced the shifting of young tyro Maro Itoje to the backrow, a position he has filled admirably for club side Saracens on occasion but one in which he is yet to truly shine on the international stage. Such is his prodigious talent, he is unlikely to remain a greenhorn at no.6 for long if required, but the form of Lawes and Launchbury in particular, who has picked up two Man-of-the-Match awards in his three games, has given Jones a pleasant second-row headache to contend with when all his troops are available.

Two further wins over Scotland this weekend (Monday 13th 3am AEST) and Ireland a week later, will see them overtake New Zealand’s world record for consecutive victories, as well as bagging a second successive Six Nations title and Grand Slam in the process. Not bad for a team Jones still considers to be very much a work in progress as he plots their ascension to the summit of the test arena in time for the 2019 World Cup in Japan.

But while you do feel that they are due a performance of some note anytime soon, their Celtic rivals will certainly not be standing on ceremony for a triumphant English parade. Indeed, Scotland are enjoying their best start to a Six Nations since 2013, have a side that many rate as the strongest since they last won the tournament – the final Five Nations before Italy joined the party back in 1999, and in fullback Stuart Hogg, have arguably the standout player of the competition. 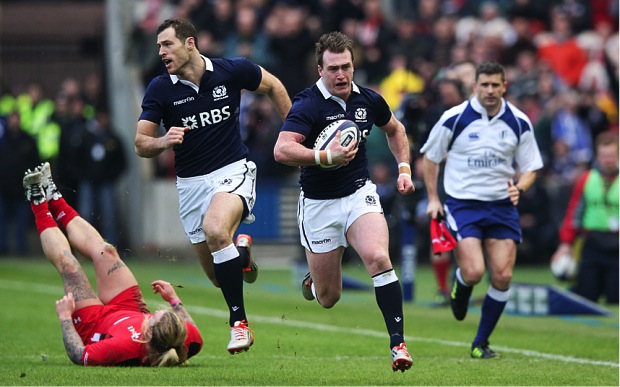 Fullback Stuart Hogg has been in scintillating form for Scotland

They haven’t won at Twickenham against the ‘Auld Enemy’ for 34 years, but despite the cruel loss of inspirational skipper Greig Laidlaw in round two’s gallant loss to France in Paris, they will go into this Calcutta Cup clash high on confidence after dispatching both Ireland and Wales at Murrayfield, and with a host of players – Hogg, Finn Russell, Hamish Watson, John Hardie, Richie and Jonny Gray, and front-rowers Fraser Brown and Zander Fagerson all bang in form.

Should England prevail however, Ireland must have won their own titanic battle with Wales (Saturday 7.05am AEST) in order to take the championship to a thrilling climax in Dublin next weekend, when the two face-off in the final game of the tournament. Tucked in behind England in second place on 10pts, Ireland will still be disappointed not to be three from three at this stage given the levels of expectation off the back of their breakthrough year of 2016, when all three Southern Hemisphere giants were defeated – the All Blacks for the first time ever – in a calendar year.

An opening day loss to a fired-up Scotland was their downfall, a slow start out of the blocks unable to be redeemed despite a second half rally as they went down 27-22. A nine-try demolition of Italy in Rome a week later was some statement of intent, backed up by a workmanlike victory over a tiring France (19-9) at the Aviva Stadium to keep the momentum building. And while a visit to Cardiff to take on a Welsh side wrestling with their own demons in the absence of Gatland, looms as a particularly tough ask, recent history is on their side with six wins from nine meetings in the Welsh capital since the turn of the Millennium.

The mercurial Johnny Sexton only returned to the Irish side in round three following injury, but displayed enough against Les Bleus to suggest he may well be the man to beat again for the Lions no.10 starting jersey, with Scotland’s Finn Russell his biggest challenger based on his good form when compared to that of both Dan Biggar and George Ford, who have failed to muster the heights of which they are both capable.

Conor Murray’s stock continues to rise behind the forwards, his form edging him ahead of the ubiquitous Rhys Webb from Wales and Ben Youngs, whose levels have dipped a touch since his Spring test series heroics. Greig Laidlaw will be firmly in the no.9 conversation too should he get enough game time upon his return from ankle ligament damage.

Many understandably thought the retirement of the legendary Brian O’Driscoll and his partner-in-crime Gordon D’Arcy would leave a gaping hole in the Irish midfield for quite some time. But they hadn’t factored in the rapid growth of Robbie Henshaw in a test jersey and the emergence of a maverick talent – like O’Driscoll, a centre from the Leinster talent pool – in Garry Ringrose, alongside him.

Add to their names those of CJ Stander, Sean O’Brien, Jamie Heaslip in the backrow, Rory Best, Tadhg Furlong and Jack McGrath in the front row, and the very exciting potential of lock Ultan Dillane off the bench, and Ireland have a formidable armoury at their disposal and a host of candidates for Gatland and co to mull over next month.

But perhaps the most interesting sub-plot is the state of Wales. Four years ago, the dragons were flying high off the back of lifting the 2013 Six Nations, their second title in a row. As a result, Gatland rightfully put his faith in those he knew and trusted by selecting 16 Welshmen in his final touring squad of 45, including captain Sam Warburton. England had 13 representatives, Ireland 12 and Scotland just four.

Should Wales fall to Ireland tomorrow however, a daunting trip to Paris a week later to face a French side slowly rediscovering their joie-de-vivre, could result in four losses and their worst placing in years, a situation almost unimaginable 75 minutes into their game with England, when they had put in one of their best performances in recent history only to unravel in the dying moments. Two wins instead of course, would paint a vastly different picture, but it is hard to see Gatland being in a position to be as favourable to his trusted charges this time out.

Form is temporary and class is permanent as they say, so does he back those faltering amongst the old guard to come through – George North in particular – and hit the heights just in time based on post-Six Nations club form, or will he reward the efforts of the new breed and take a squad of young talent who have proven their worth at the top table of the European game?

With the might of arguably the greatest All Blacks side of all time lying in wait on their own soil, Gatland can’t afford to get it wrong.