With two Ken Catchpole Medals to his name, Warringah flyhalf Hamish Angus hasn’t exactly underachieved in his time guiding the Rats around the park over the last few years. But that absence of a Premiership title, or even a place on the biggest day of the club rugby calendar, has been gnawing away at the flyhalf and the team mates he grew up with for a while. Now they’re finally here, they want to make sure it counts.

By contrast, opposite number Angus Sinclair has already tasted Shute Shield victory in last year’s final. But that certainly hasn’t diminished the desire to do it all over again, and after an up-and-down season for the reigning Premiers, they look to have hit a similar vein of form to that which took them all the way this time last year, just when it is required.

Similar players in both their demeanour and the way they calmly control proceedings for their relative sides, Behind the Ruck got the views of both playmakers and their respective head coaches, ahead of what should be an intriguing match-up.

“The club has been building in the right direction for a number of years now, and I think that momentum has really helped this year. I also think this has instilled a belief within the group that we are capable of winning the comp. Our focus all year has been to keep improving. This week is no different.

“To be honest, it is a little surreal. You always dream of playing in grand finals, so to be on the eve of the game is very exciting. You can’t buy grand final experience, so it’s obviously a factor. But we are lucky that we have a number of senior players within our group who have been around a while, and have played in big matches before.”

“I think there is definitely a target on your back as Premiers but we knew we had to be better than last year to have another crack at the title. We weren’t too far off in the games we lost during that middle period, and missing guys like Hugh [Sinclair] and Will [Miller], and with Crono [Simon Cron] away, it was probably just a case of lacking a bit of experience and being off in a few small areas.

“I can remember the day of the grand final really well last year, but not really the week leading up to it. There is definitely the same sense of excitement as last year, and I think the experience of last year definitely helps. It’s a different day to any other during the season in terms of the crowd, the buzz around the ground, and the social media build up. But at the same time, the Rats vs Manly games are always big too. We have had a really good week of preparation and are ready to go.”

“Hamo has been one of the most consistent players in the Shute Shield over the past five years and his two Ken Catchpole medals are testament to that. He’s got all the skills and a great rugby brain, and it would have been tough on him not playing the last three or four weeks.

“I definitely enjoy playing against him, and he and Josh [Holmes] have a good combination and have been playing together for a number of years. But I think I’ll more be looking at directing the team around, rather than a specific one-on-one battle, and I think he’d probably say the same thing.”

“Gus is in great form. He has a very complete game – a strong running pass and kicking game. He is strong in defence and has strong game control, and he likes to release his outside backs but also utilise the forward runners. He will be tough to shut down. I think the forwards will play a large role in the quality of ball and as such, what Gus and I will be able to do in terms of game management and moving the ball.

“I enjoy playing him as we go back a long way – we actually played under 16’s Green Shield cricket together with Eastwood’s Tommy Hill at Gordon. That was great fun and the banter has been flowing ever since.” 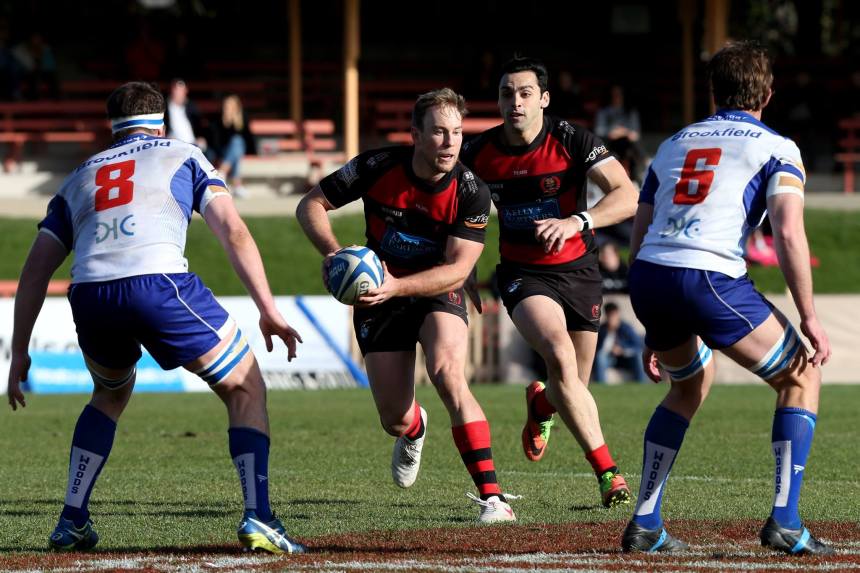 “I think we play a similar style. Norths try to move the ball off the back of a strong forward platform, and we like to try and do the same. Our forwards have been outstanding this year. We have focused on upping our levels of physicality, and the scrum has been a great asset. Obviously, every 9/10 wants clean, front-foot football. The more you can get the easier the game is to control.

“Josh [Holmes] has been outstanding this year, he is a big game player. Nick [Duffy] and Angus’s combination has developed well this season, getting to know how each other plays. So it will prove to be an intriguing battle.

“The game will be won at the ruck and with defence, and at the end of the day the team that makes the most of their opportunities will win. Norths offer a different challenge to Manly last week, and we will need to be at our best to win it.”

“We won’t take much from the previous games into this one. Three weeks ago against Warringah we had a few key players missing and didn’t control possession well, and besides that game, we have been building nicely. We addressed the areas that were letting us down in the middle of the year, and have had more or less the same team each week for the last five or six weeks, which has allowed us to build good momentum.

“We are missing a few guys from this time last year in Irae Simone, Con Foley and Stephan Van Der Walt. But while they are all great players and it would be great to have them available for selection, the guys in those jerseys at the moment are doing their job really well. Harry [Burey] and I have a really good understanding of each others games and the team patterns at 10/12, and Cam [Clark] is playing really well outside him in the 13 jersey. He’s got explosive speed and power, and is an excellent defender. And at the back, Augey [Slowik] has been really good since coming to the club midway through the season.

“We will need to play well for 80 minutes this weekend to win the game. It sounds obvious but we need to execute our processes, and whichever team does that better, will come out on top.”

“Obviously, both are key players for their teams. Both are kickers, which is important in a grand final, and both are responsible for leading their teams around the park. Angus is an excellent leader and Hamish is a massive part of his team also.”

“They’re both a very similar style of players. Both have learned their craft well over a lot of years, both are experienced players now and you look to them for leadership and in particular, those crunch tactical decisions. Their goal-kicking and kicking in general play, will go a long way towards deciding the result.”