Posted on September 1, 2022 by Paul Cook Leave a comment

Most, if not all photos by AJF Photography!

1. MICHAEL BALDOCK: Michael ‘Baldy’ Baldock has been an integral member of the 2nd Grade Team in 2022. A Northern Tablelands prodigious talent, Baldy found himself wide eyed and bushy tailed in University colours. Once a small backrower, Baldy has transformed himself into an industrious front rower. As tough as they come and willing to put it all on the line for his teammates, you can expect a big shift from him on Saturday.

2. PAT O’DOHERTY (c): The skipper and Master of ‘Qi’, Big Dohey will be leading from the front on Saturday. A wannabee beaches boy currently residing in Freshwater, who loves to spend plenty of time enjoying the soft silky sheets of Darlinghurst with his gorgeous girlfriend. A beloved member of the SUFC, the boys will be looking to lean on his vast experience as we take the field on Saturday.

3. DANIEL BOTHA: You may remember former South African international Bakkies Botha for his hard enforcer style of physical rugby. Well, our very own South African Botha is no different, albeit in a tighthead props physique. He’s big, bad and has been able to ‘narrow his focus’ this week as he prepares to go head-to-head against one of his best mates over at Eastern Suburbs.

4. JEREMY ELLIOTT: Jeremy ‘Big J’ Elliot has taken his game to another level in 2022 under the assured guidance of Raymundo Hudd. Known around the club as ‘Big J’ due to his tantalising moustache and friendly disposition, you can expect plenty of energy and a HUGE smile when Big J takes the field on Saturday.

5. ANGUS ALLEN: ‘Lenny’, or to some ‘Leonard Cohen’, has brought a wealth of experience to the 2s this year. Hailing from the Nick De Crespigny academy, he’s considered as one of the last truly old school rugby players going around. He has an awkward running style, however, the engine he’s built up from his early rowing days allows him to go all day (and all night). Lenny will be looking to have a huge day on Saturday.

6. MALIPOLO MANUKIA: Mali, a proud Tongan who sports a Padawan style braid has certainly graduated into a fine Jedi Master throughout the 2022 season. Born and raised in West Auckland in New Zealand, he has undoubtedly been 2nd Grades Players Player for the 2022 season whilst also being an integral member of the club off the field. His passion for his Tongan heritage resulted in him organising a hugely successful club Pasifika Night, which was thoroughly enjoyed by the diverse SUFC.

7. HAMISH DUNBAR: Hamish ‘Mishy’ Dunbar is a celebrated veteran of the SUFC 2nd Grade Team, and is known for his unwaveringly solid defence on the field and tongue in cheek sense of humour off the field. The recently engaged Hamish has been a mentorlike figure throughout his time at the birthplace, often taking younger members of the club under his wing and leading the charge in all aspects of life. Big J is certainly one of those youthful punters eager to learn the tricks of the trade over the weekend. Rest assured when Mishy takes the field on Saturday he’ll be taking no prisoners.

8. PAPILLON SEVELE: Papi has been his damaging best throughout 2022 in what feels like his 40th season at the club. Starting out as a green 15-year-old back in 2017, he has now matured and accustomed himself to a hugely successful ‘21st season’ off the field, often sharing stories about his weekend’s antics during a Monday evening gym session to lighten the mood. Renowned for his size and strength around the club, Papi will certainly be looking to have a big impact on Saturday’s game.

9. BANJO TRAVERS: ‘Bunyip’ has been a major part of the spine of the 2s this year. When he’s not practicing his sublime passing and box kicking abilities, you’ll find Banjo executing large stock market trades on behalf of his multi-million-dollar clients at Bell Potter. Banjo’s experience in big games will be invaluable for us this weekend against Easts. 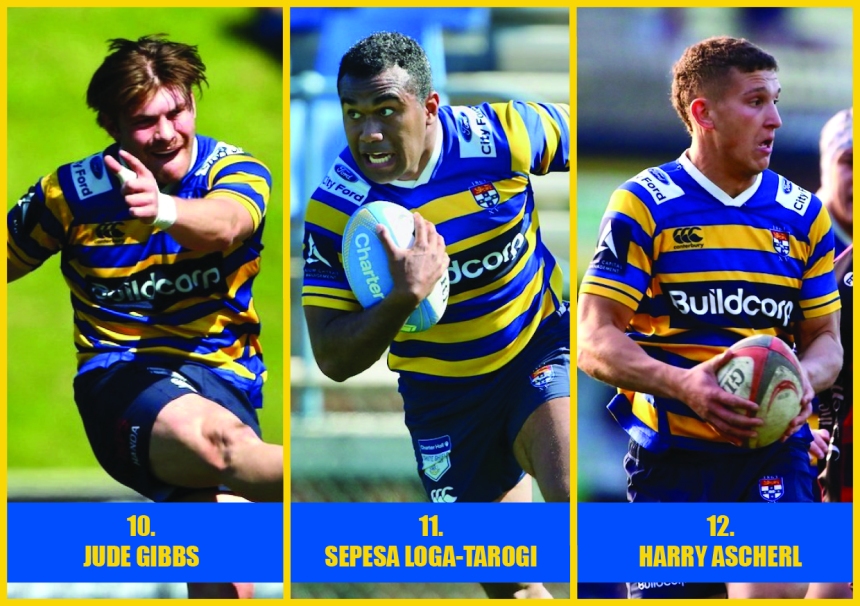 10. JUDE GIBBS: As one of the great rugby intellects of our generation, ‘J-Man’ has been playing some of his best rugby as part of 2s this year. His ability to have a Stephen Larkham calmness, but also the freakishness of Quade Cooper, always leaves the opposition second guessing themselves. Have no doubt, J-man will play a crucial role in Saturday’s game.

11. SEPESA LOGA-TAROGI: Pesa, or ‘Mr Loga-loga’, has been in career best form for the Students this year. He is ever reliable under the high ball, a damaging defender and can pierce a gap in attack like no other. He is the world’s nicest bloke and also dresses heaps fresh – not scared of popping the collar on any of hundreds of Ralph Lauren shirts he owns.

12. HARRY ASCHERL: The big man from Bristol, Hazza has been one of the great unknown quantities of the competition this year. Coming to Australia from the Bristol Bears to hone his craft, Haz has been worked tremendously hard both on and off the field. Currently residing in the gappy-flat at St Joseph’s College, when he’s not training or watching code you’ll find him having a schooner (or two) at the Triple H, or making his mark on the Bondi night scene with Vinny Creagh.

13. SIMON KENNEWELL: Simo has had a mighty presence in his first year at the Students. Making a seamless transition back to the 15s game from the Aussie 7s, Simo has played most of this year on the wing in 1st Grade. Since being promoted to the 2s, the Clark Kent look-a-like has brought a wealth of experience and energy to the team. When he’s not making line breaks, you’ll find Simon trying to fit into the smallest shirt he can find. Expect a massive shift from him this weekend.

11. EDDY KING: ‘Kingy’ has made an immediate impact to the 2s upon his return from his second sabbatical studying abroad at St Mary’s College of California. His lightning footwork and unhinged mentality is what makes him a force to be reckoned in the outside backs. His composed nature is built off the back of his ability to always maintain the optimum level of ‘Qi’. Eddy will undoubtably make his presence known in the game this weekend.

15. LEWIS HOLLAND: The boy from Braidwood and former Aussie 7s captain has been monumental for the SUFC 2s this year. Being a man of the land, he’s known for being unable to resist a Shell House four-course degustation courtesy of Jordan Sukkar. He’s a natural leader and is always leading from the front both on and off the field. Expect Lewis to make a huge impact on Saturday.

16. SAM CANTWELL: Sammy Cantwell has done the hard yards throughout 2022 and has spent plenty of hours throughout the week honing his skills for some important cameo appearances off the bench in the all-important hooking role. Expect nothing less from Sammy on Saturday who will be waiting eagerly on the sidelines for his opportunity to have an influence on the game.

17. PADDY TAGG: ‘Spud’ has enjoyed a hugely successful 2022 season, which included his selection in the Junior Wallabies squad for the Oceania Championship. Constantly interchanging between colts and grade throughout the year, Spud’s versatility as a starchy vegetable allows the team to feed constantly on his youthful insights pre and post-game.

18. BRADLEY AMITUANAI: Another mainstay of the 2nd Grade side in 2022, Brad has come a long way since his Bradley and Tyrone days at Newington College way back in 2014. Once a barnstorming outside centre and now a devastating tighthead prop, Brad will be looking to have a huge impact on both sides of the ball come Saturday.

19. AIDAN WEARNE: Aidan ‘Shinsey’ ‘Dossman’ Wearne is one of the best locks going around when he can get himself on the field. Nicknamed ‘Shinsey’ due to his constant battle with shin splints, Wearny certainly knows his way around the physio clinic. So much so he even started dating one of their receptionists. On the field ‘Shinsey’ has been exceptional throughout 2022, culminating in a 1st Grade debut that showed glimpses of what is to come in the future.

20. JACOB RATCLIFF: Jacob’s season has been full of surprises clouded by European summer temptations and Hawaiian sabbaticals. A couple of weeks off the grog has put J back on the straight and narrow as he looks to live up to his older brother’s impeccable record both on and off the field. Blessed with bootie and brains you can expect to see plenty of energy when J takes the field and an even more energetic TikTok performance post-game.

21. TASMAN SMITH: As the LA Giltinis’ Rising Star for 2022, Tas has brought all the glitz and the glamour of Hollywood to Camperdown this year. Putting his good looks and tanned skin aside, his skills and footy brains are his best attributes according to his teammates. Tas will offer plenty of impact off the bench. 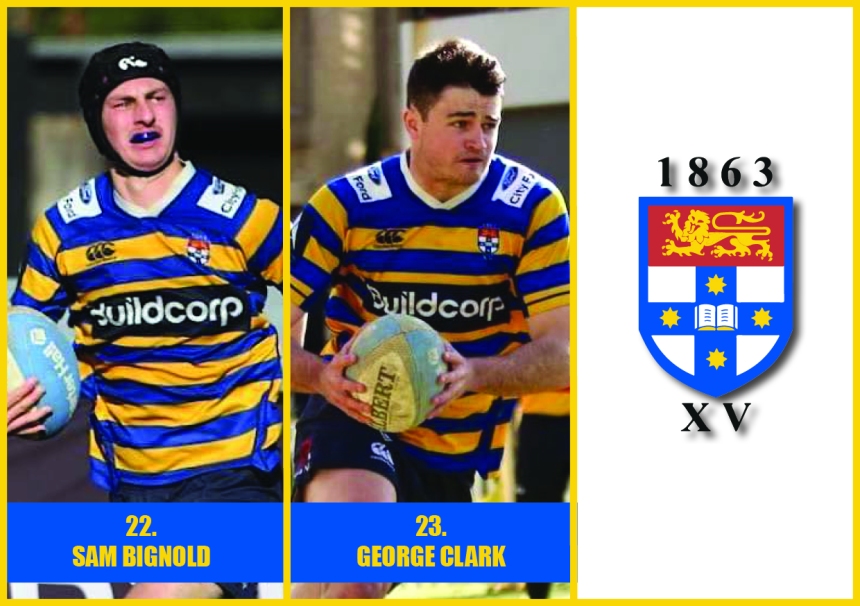 22. SAM BIGNOLD: ‘Biggers’ has been a staple for the back three in the 2s this season, and his growth throughout the year has been phenomenal. A lot of his best performances can be credited to his mentor Jack Stanford, who has been guiding Biggers on and off the field as a mortgage broker. A strong dictator at the back, everyone knows Biggers will be putting in a huge shift for the lads this weekend.

23. GEORGE CLARK: GC, the boy from Yass, and schoolboy athletics prodigy hailing from St Ignatius College, has been a huge addition for the 2s this year. Returning from a stint in the Northern Territory as a Jackeroo where he managed to finally develop a thick country accent, it has made him feared amongst his opposition, and quite frankly his teammates. George will undoubtably bring a lot of speed, agility and no-nonsense off the bench for us this weekend.