The hoodoo is over, with NSW Waratahs’ 41-12 win over the Highlanders in Sydney on Saturday night breaking a 40-game winless streak for Australian sides against New Zealand opposition. But the rugby gods gave them a helping hand, a red card for Highlanders winger Tevita Nabura just 15 minutes into the contest opening the door for a victory that still wasn’t without it’s nervous moments.

A 15-0 half-time advantage became 22-0 shortly after, but a gallant Highlanders fought back to trail 29-12 with 25 minutes remaining. However, with Bernard Foley and Kurtley Beale starting to enjoy the extra space as the game ticked into its final quarter, the numbers finally told with doubles from Taqele Naiyaravoro and Israel Folau – his 50th in Super Rugby – helping the Waratahs to a bonus point win, and finally, the end of trans-Tasman domination. For this week at least.

It was a positive opening for the home side, a lineout steal from Michael Wells kick-starting a flowing move upfield that signalled their intent with ball in hand. And with the Highlanders keen to slow down momentum at the ruck, a penalty for not rolling away was always a possibility, Bernard Foley dissecting the uprights for a 3-0 lead.

The visitor’s thought they had hit back from their first visit to the Tahs’ 22 five minutes later. Some slick offloads in the tackle carving a path straight up the middle for Aaron Smith to run home, only for the TMO to confirm a forward pass in the build-up. No try.

The Tahs continued to probe at pace, and they extended their lead in fine style on 15 minutes. A wraparound play between Foley and Sekope Kepu released Damien Fitzpatrick through the line, and when the ball was recycled wide, Kurtley Beale spotted Lima Sopoaga coming in off the wing, to put Taqele Naiyaravoro away for his ninth of the season.

Then came the match-turning incident, and what an odd one it was too.

An up and under from Jake Gordon was taken well in full flight by Tevita Nabura. But as the Highlanders winger was coming back to ground, he inexplicably angled his foot up towards Cam Clark – who had checked his chasing run to avoid a penalty – and caught him flush on the face. The crowd close to the incident screamed ‘foul play’ straight away, but it took a couple of replays for the referee and TMO to concur that the only outcome could be red.

The Tahs passed up the opportunity to take immediate advantage, ignoring numbers out wide off a lineout to carry into traffic instead, and duly suffered a turnover. But when Aaron Smith played at the ball as Curtis Rona tried to find Gordon from the next home attack, and subsequently saw yellow, their chances of a severe leg-up in the contest were amplified.

Up 8-0 as the game entered the second quarter, and with the luxury of a two-man advantage for the next 10 minutes and a chance to take the game out of the Highlanders’ reach – patience, process and execution should have been the Waratahs’ mantra. But rather than play the numbers game that 15 on 13 must surely yield, they looked to try and score off every carry instead.

Eventually, cool heads prevailed and the ball was sent back out to the waiting Naiyaravoro, who got into double figures for 2018 with a tidy spin and one-handed put down as he fell backwards in the tackle. It was the giant winger’s 25th try in Super Rugby. Remind me why we’re letting him head north again?

Foley’s superb sideline conversion made it 15-0 after 24 minutes, and an unassailable platform was starting to take shape. But those cool heads soon disappeared when two silly penalties had the visitors inside the Tahs’ 22, and perhaps more importantly for them, running down the clock for Smith’s return.

The sight of Jake Gordon box-kicking away possession with two extra men to utilise was surely not what the doctor ordered either, and when the All Black scrumhalf did indeed rejoin the fray with no further damage to the scoreboard, you couldn’t help but wonder if the Waratahs had missed a trick that might come back to bite them.

In fairness, the Highlanders were doing their utmost to keep the scoreline intact. Impressive scramble defence combined with a few scrum resets, ongoing injury treatment, and the tying of shoe-laces to help stem the tide, but they were being ably assisted by some poor game management by their opponents.

A forward pass as the siren sounded brought the opening stanza to a close, and the Waratahs were going to have to be a heck of a lot smarter in the second forty if they were to make good on the hoodoo-ending gift opportunity they had been presented with. 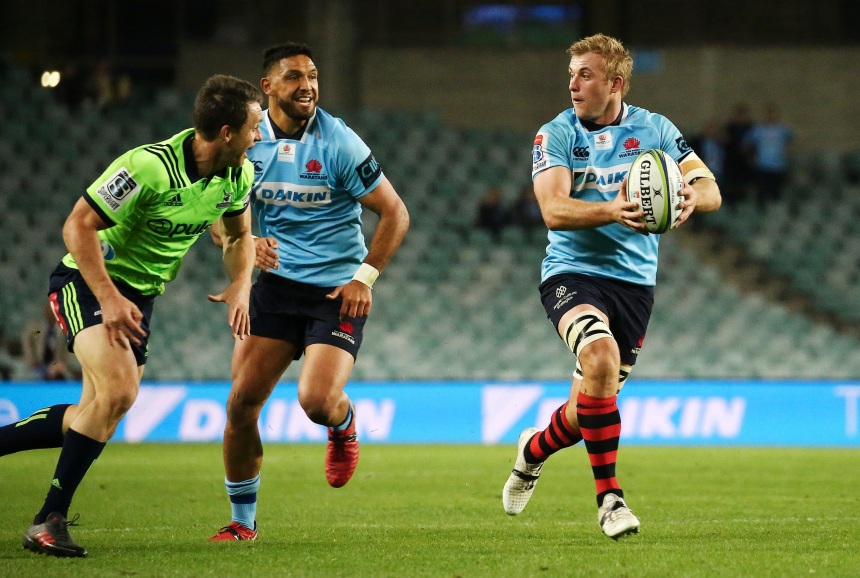 Will Miller gave an another all-action performance from the backrow – Photo: Karen Watson

They almost got the start they wanted when Foley darted through the line, but his pass for Curtis Rona to finish was wrapped up well by Elliot Dixon, and the TMO ruled he had been held up. The ensuing scrum allowed the Tahs to keep their foot on the throat however, and finally, they decided to suck in defenders before shifting it wide for the unmarked Folau to slide home.

Another peach of a kick from out wide by Foley took the Tahs out to 22-0 – surely it couldn’t go wrong from here? But they were caught celebrating the try within a minute, the Highlanders probing the short side before Ben Smith put up a crossfield kick for Elliot Dixon to go in unhindered.

A scratchy 10 minutes ensued, with the Highlanders’ tails up and the Waratahs struggling to regain their cohesion. A lineout maul on 53 minutes looked to have got the ball rolling for them again, but a five-pointer for hooker Fitzpatrick was chalked off for obstruction, as his fellow forwards got a bit too eager with the line in sight. But amends were soon made by one of the tries of the season from those in Cambridge Blue, and what a way for Israel Folau to rack up the half-century in Super Rugby.

It was he who kick-started it all, catching a poor clearing kick from Rob Thompson before spinning it infield for Naiyaravoro. The big winger took it to the opposite flank and found the seagulling Michael Wells, before a succession of tidy offloads took it back from coast-to-coast – from the newly arrived Nick Phipps to Tom Staniforth, and on to Kepu, Beale, Fitzpatrick, Foley, Miller, Rona and finally, back to Folau to slide home. Eleven Waratahs involved in all – what a try!

Again, seemingly keen to give the crowd their value for money, the Waratahs switched off from the Highlanders’ next visit to their 22, and the undermanned visitor’s performed wonders to control their own driving maul over the line for hooker Ash Dixon to burrow over and make it 29-12. This wasn’t over.

Bernard Foley – starting to ask questions of the Highlanders defence with ball in hand in a way that has been largely Kurtley Beale’s domain in 2018 – set off on a dazzling run through the middle on the hour, before opting for the long pass wide for Rona instead of Phipps off his shoulder. That attack was soon snuffed out, but when play was recycled towards the posts, it was the Wallaby scrumhalf sniping from a metre to find the line, only for the giant screen replays at Allianz to show the ball was lost in grounding.

But with the visitor’s understandably tiring from the extra workload, a fifth try from replacement Lalakai Foketi on 64 minutes, looked to have finally ended the match as a contest. Lovely hands from Kepu put incoming hooker Tolu Latu through a gap, Phipps recycled to Foley, who darted between two, got his arms free, and fed the young centre on his inside.

The floodgates were now opening, and the Tahs added a sixth for good measure. A scrum just inside the Highlanders’ 22 provided quick ball for Phipps to carry hard, and he fixed his man before giving Bryce Hegarty the space to pick his pass for Rona to cross in the corner.

The final scoreline was harsh on a Highlanders side that worked tirelessly to still compete for the win, and then in terms of damage limitation. But while the Waratahs didn’t always shine with their game smarts given the scenario presented to them, they did get the pay-off their persistent attacking intent deserved.

If they can somehow conspire to achieve a similar outcome in Hamilton next week against the Chiefs, season 2018 is firmly back on track. In the meantime, Australian rugby fans can make do with a long-overdue win over their rivals across the ditch.