Australia’s Women’s Sevens team have had to settle for the Bronze medal in San Francisco, beating hosts USA in a play-off after suffering an upset loss to France in a dramatic semi-final.

They led the French 12-0 at half-time after controlling the opening period. But a superb fightback from their opponents looked like taking the game into extra-time at the very least, before a try just on the siren broke Aussie hearts, and left their gold medal dreams in tatters.

Getting themselves back up after such a disappointment was probably half the battle as they took the field for the bronze medal game. Taking on the USA in front of a fervent home crowd at AT&T Park was the other. And it proved to be just as tough as expected, with the game going one way then the other, before a brace of tries from the prolific Ellia Green edged Australia home 24-14, and ensured they wouldn’t be coming home empty-handed.

“We’re proud of the effort to come away with the bronze after that hiccup against France,” said co-captain Shannon Parry. “We really wanted to put on a good performance and I think we did that.”

“It is definitely a true test of character when you do lose and you have a key moment in a key match like that. To bounce back the way we did – it was very tight through the first half but to then extend our lead in the second half was very pleasing.

“It’s the end of the season now and it’s time to rest, recover and look forward to the Olympic qualifying year, next year.” 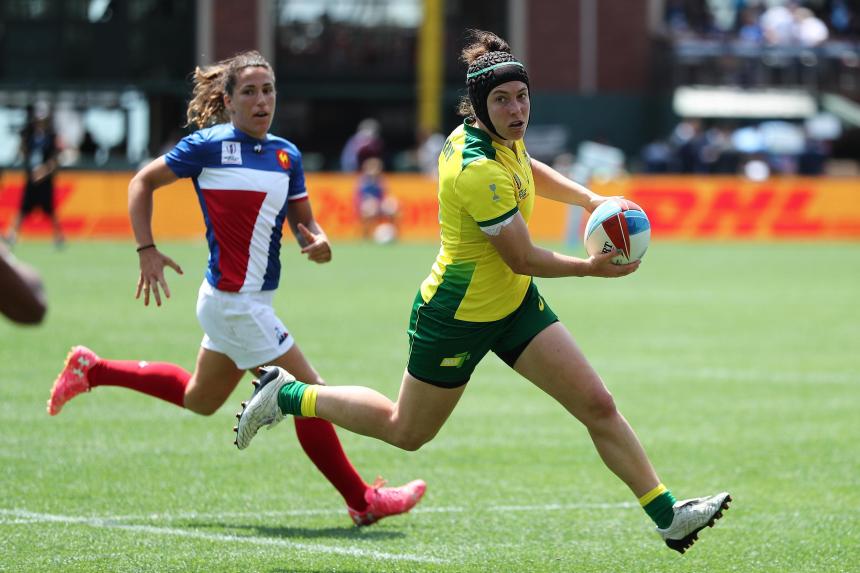 Having defeated France in the Paris Sevens last month to lift the World Series crown, the Aussies were firm favourites to come through again and set up a likely showdown with arch-rivals New Zealand for gold. And things went pretty much according to plan in the first half, with Evania Pelite continuing her try-scoring exploits from Day One with the opener, after Alicia Quirk stole a lineout.

Their task became even easier when the French lost Marjorie Mayans to the sin-bin, and they soon took advantage with speedster Ellia Green on the end of some quick thinking from Charlotte Caslick and Emilee Cherry, to race home with her first touch of the match and a 12-0 lead at the break.

So far, so good then. But with the half-time thoughts of coach John Manenti still echoing around their heads, they were caught cold, Chloe Pelle outpacing Sharni Williams to find the corner.

The score galvanised the French girls, and their physicality began to give them the upper hand – although, one contentious clean-out left Ellia Green out of action for a HIA. But when the second try arrived, it had very much been coming, Fanny Horta going over near the posts after a wealth of French possession wore down the Australian defence.

At 12-all and with extra-time looming, any score now would be decisive. Unfortunately, the Aussies just couldn’t get their hands on the pill, and much to the horror of those clad in green and gold left chasing her down in vain, Anne-Cecile Ciofani picked her moment to sidestep a tackle on the sideline, and gas it all the way to the line to put France into the final.

Many teams would fail to recover from such last-gasp disappointment. But this side haven’t won Olympic Gold and two World Series in the last two years without having to come through some sizeable adversity, and when they took the field against the USA – backed to the hilt by a vocal crowd – their desire to finish on a high was clear.

They also had to do so without the influential Alicia Quirk, who succumbed to a knee injury in the semi, with Cassie Staples starting in her absence. But it was the Aussies who struck first, and through who else but Evania Pelite, who kept up her record of crossing the chalk in every game at the World Cup.

The USA hit back with haste, the pacy Naya Tapper going over to leave the match all square at 7-all at half-time. But the restart saw the incoming Staples find her time to shine, running on to a neat pass from Caslick to restore the lead.

Caslick wasn’t finished with her playbook, the superstar putting a perfectly weighted kick in behind for the onrushing Green to do what she does best and stretch those legs for the corner to make it 17-7, only for Tapper to remind us of her talents with another five-pointer to keep the game in the balance with the clock ticking down.

Cue Ellia Green. Sniping her way from halfback, she caught the US defence napping to run in her second and confirm the 24-14 win, and the bronze medal.

It wasn’t the colour they wanted, but these girls and all involved with this team across the year, should feel very proud of their achievements in 2018. And you wouldn’t bet against them going to another level in 2019…