1. JAMES KNIGHT: Knighty is a club stalwart, notching up his 150th game for the club this season. He’s an unsung hero of the Brotherhood – he just gets about his work with minimal fuss and even fewer words. Being a policeman, he’s played countless games over the last couple of years on no sleep, coming off the back of a night shift on the beaches. He’s as tough as they come, and I don’t envy the Rats player who tries any cheap shots on one of Knighty’s teammates.

2. WILL WEEKS: The beauty of 4th grade is that it welcomes players from a range of playing abilities. You get some unfit blokes who just love being able to have their first beer at midday, while you also get some guys of 1st grade ability, who are unable to commit to the rigours of top-squad training. Luckily for us, Weeksy falls into the latter category and has been an invaluable asset to us this season. He brings experience, enthusiasm and an incredible engine. Expect him to lead the charge right from the first kick-off.

3. WILL HUNTING: ‘Smiley’ as he’s known to all of us, is the younger brother of 1st grade stalwart, Lawrance. Smiley brings a lot of energy and a strong desire to win to this team. He scrummages well, carries well, and can be seen regularly making cover tackles out wide too. If it wasn’t for a season up the Pacific Highway last year in an ugly-looking jersey, it would be hard to say a bad word about him.

4. JACK DAVIES: Jack falls into a similar category to Weeksy, very capable of playing up the grades. However, coming off the back of successive knee injuries, he limped into this year thinking that it might be time to just hang up the boots. A proud clubman, he couldn’t escape the constant peer-pressure from our guys to, “Just strap the s**t out of it” and “have a run with us in fours”. A lovely bloke and a very talented footballer, much of this team’s success can be directly attributed to his work rate around the field.

5. HENRY MIKKELSEN: Where do I start with Henry ‘Night Game’ Mikkelsen? Mikko has been at the club for a number of years now, priding himself on being the most-capped colt in Norths history. He’s red and black through and through, and has always been one of the club’s strongest… off the field. In previous seasons he’s been an impact player from the bench, but this year his strong form has put him as one of the first picked in the starting side. He’s been a try-scoring machine, and Richie Woolf admits that hearing “Mikko scored another couple of tries this morning” drove him to cross the line as often as he did this season. 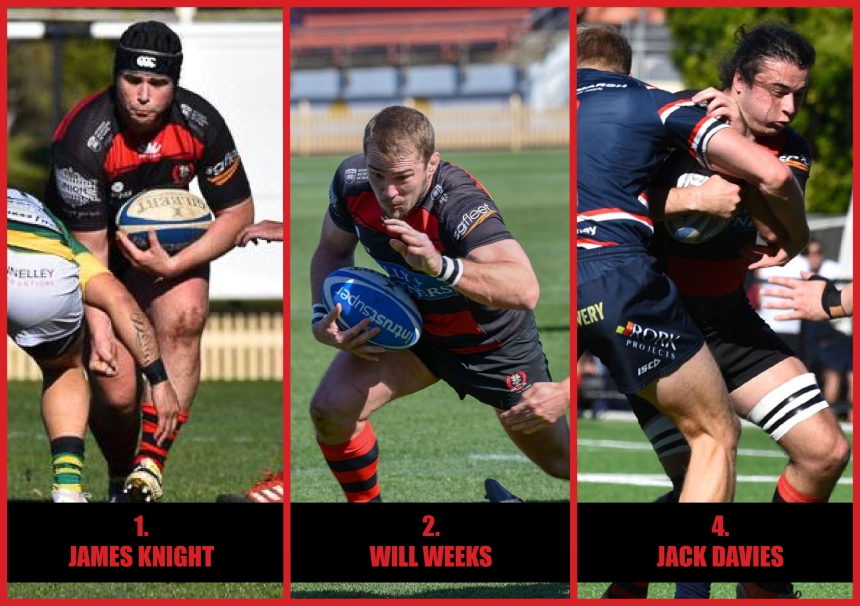 6. OSCAR DOUGHTY: Oscar is one of the most well-liked guys in the playing group. He will throw himself into anything that moves for his teammates, inspiring those around him with his determination to break through an opposition’s defence. A veteran of the last Norths fourth grade team to win the Henderson Cup in 2012, he’s also a veteran of off-the-field shenanigans. He’s having his finest year in the red and black. Long may it continue.

7. HARRY LIND: Lindy is one of our country lads – tough as woodpecker lips. He’s a great fella with zero ego and will do anything for the team. He’ll truck it up the middle when required, smash into any opponent, and will do it all with a big smile on his face. He might speak slowly and stare at you with a blank look in his eyes, but make no mistake, he’s got a high rugby IQ.

8. BEN MARTIN: Benny has been our Player of the Year the last two seasons. At the end of last year, he packed his bags and headed over to Canada to have a season with the famous Meraloma Club in Vancouver. He went on a mission to “discover himself” as he put it. However, on face value, the only thing he discovered was poutine. He arrived back in town in July, just in time to help the team’s charge to the finals. An incredibly talented player that arguably should be playing higher, he simply loves ‘the Brotherhood’ too much. Has an uncanny ability to produce a game-changing moment.

9. DOM LONGHURST: ‘Bull/Bullant/Bulldog/Mod/Meme/Crawler’ – whatever you want to call him, he’s at the core of the Brotherhood. Our team skipper, Dom’s a fierce competitor and has red hair. In his 100 plus games at the club, he’s come close to winning a Premiership a couple of times, however each one has just been out of reach. His strong desire to “bring Henderson home” is contagious amongst the playing group, and his warm and bubbly persona is always well received by the referees. Expect him to activate.

10. JACK RIXON: Most people would be used to seeing Joe Jenkins at flyhalf, our slightly overweight friend who’s worn the no.10 jersey for years. Midway through the season he moved overseas and in stepped Jack, a quiet, unassuming bloke from Tamworth. Jack has thrived in the driver’s seat and has got better and better each week, his calm head and swagger instilling all those around him with confidence. His kicking game is fantastic, and he regularly keeps opposition defences guessing by taking the ball right to the line. Not only does he have the rugby nous of Stephen Larkham, but also his personality. Bernie 2.0 will lead the boys well.

11. PATRICK NAKKAN: ‘Nakkos’ is one of the club’s favourite sons. A massive contributor to everything both on and off the field, expect him to play with plenty of passion out there. While his body seems to be made of glass, he always has plenty of super glue on hand to make sure he’s pieced back together by Saturday. A fantastic bloke who loves a bit of meat, he’ll make sure the boys are pumped when they walk out of the sheds. 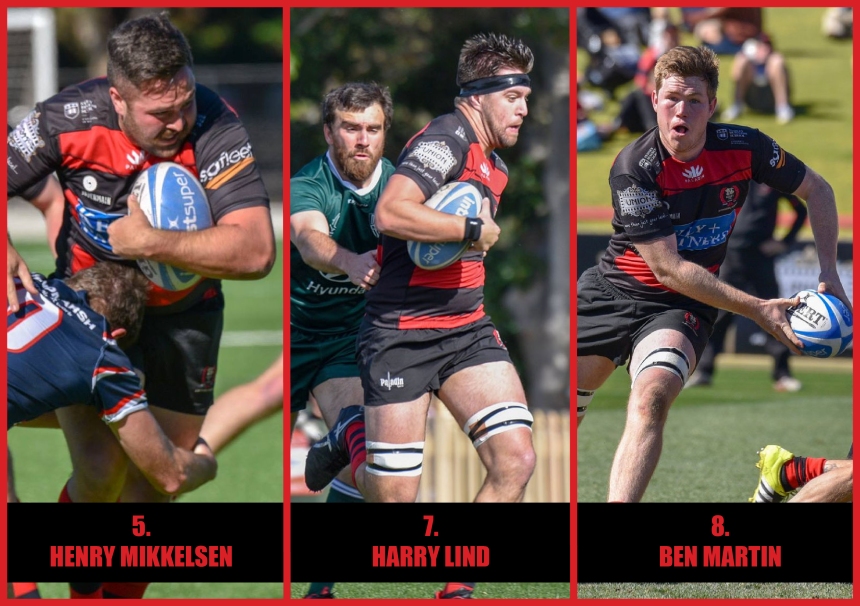 12. NIC CLANCY: A veteran of 4th grade, there would be fewer more talented centres running around in lower grade club rugby. Hearing about the club after joining one of our sponsors, Blue Crane Capital, he was welcomed down to Primrose Park with open arms. Nic’s a powerful ball carrier, and loves whacking anyone brave enough to run down his channel. It’s hard to believe he’s only been playing rugby since he left school!

13. JAYDEN STOKES: Stokesy is living proof that there’s no nepotism at Norths. A talented young player, his old man is actually coach of our 3rd grade side. He was instrumental in their win over Warringah in the Qualifying Final, however, due to some flow down he found himself in fours… no doubt it was awkward at the dinner table that night! A hard runner and a solid defender, he plays with no fear.

14. MITCH KAY: In every rugby team you have a range of personalities. Some loud, some quiet, but all equally as important in providing balance. Mitch is one of our quiet achievers, rarely makes a mistake and rarely says a word, but you know he’s going to give it everything he has. A dependable player who has also played higher grades, he provides a calm and experienced head to some of the younger members of our backline.

15. ANDREW WOODS: Woodsy has been an unsung hero of our backline this season. A former halfback who’s played every grade in the club, he decided coming into this season that he’d like to have a crack further out wide. He’s excelled at 12 and 15 as well as on the wing. A clear communicator who always makes the right decision in both attack and defence, he’ll love every minute out there on Saturday.

16. JOSH CLIFTON: ‘Yobbo’ is a Brotherhood legend. A unique character, he’s been known to play a full game in fours, half a game in threes, eat four sausage sanga’s, and drink fifty schooners before waking up on Sunday morning to go for a 15km run. He’ll come on and chop tackle anything that moves, hit every second ruck, and throw some remarkable wrong’uns into the lineout. A Mad Monday enthusiast, expect a massive performance from him off the field, as well in the days to follow.

17. ASH HALL: Who in Sydney club rugby circles hasn’t heard of this bloke? He gained a lot of fanfare this season when he played his 200th game for Norths. This sums him up – he absolutely loves this club and nobody deserves to lift some silverware more than him. He may be short in stature, pudgy in build, grey and curly in hair, but make no mistake – the boy can play. He has a wealth of experience, and is an expert in the dark arts of the front row. 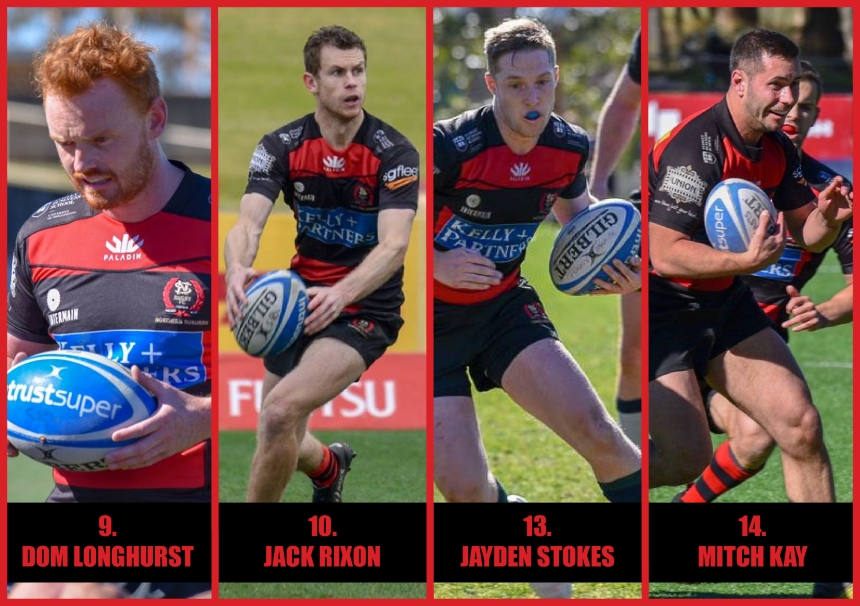 18. TYLER KEY: Tyler is one of our quiet assassins. Isn’t one to say too much, instead he lets his footy do the talking. A very strong scrummager, and equally as mobile around the park, Tyler has the potential to play in the top grades in the coming years. Nothing speaks more volumes of his confidence than the fact he’s voluntarily shaved his head bald since he was 14.

19. BEN MOLLOY: Benny is an experienced operator who has rugby knowledge beyond his years. A lineout general, watch him charge into rucks and belt anyone in his way. Ben’s also an up-and-coming coach, which keeps all of us in check!

20. ALEX IRONSIDE: Alex is a very talented backrower, who only finds himself on the bench due to a disrupted season of injury and work commitments. It’s a testament to the quality of this side that he’s not starting, but he’ll no doubt instil an enormous amount of confidence when he gets on. A proud plumber, he also brings a lot of humour and energy to this group with his zest for life.

21. TOMMY EVANS: A nasty ankle injury in a pre-season match kept Tommy sidelined for the bulk of this year. This time wasn’t wasted though, as he flew overseas to bring Ben Martin home from his North American adventure when the team was one win from six games. A traditional fetching no.7, he can also link up well with the backs. Another veteran of this side who bleeds red and black, expect Tommy to lead the line-speed in defence when he gets on.

22. BILL BEVAN: Bill’s a tough customer, hailing from Leeton in south-west NSW. Our team admittedly isn’t the most diverse, or multicultural, so Bill’s blonde dreadlocks is about as foreign as it gets. A softly spoken yet punishing defender, Bill is a former junior pole vault champion.

23. PHIL PALE: It’s always a coach’s delight when you have someone like Phil to bring on from the bench. Phil’s an incredibly hard worker, a great team-man and a very handy player. Not only has he got a great pass on him, but his versatility ensures he can cover several positions in the backline.

24. GUY SPANTON: Guy is one of the younger guys in the team and has plenty of good footy in front of him. Lightning fast and full of confidence, a season disjointed by injury has been the only thing preventing him from playing higher grades this year. The energy he brings to the group is infectious, and he will no doubt make an impact when he gets the ball in his hands.

25. HUGH ADAMS: Hugh is another one of our quiet characters, but has an enormous passion for this rugby club. Big and fast, you know he’ll give absolutely everything he’s got when he steps out on the field. A polite person by nature, Hugh has learnt from last year that it’s best to not tell the team that he has a free house on Mad Monday.