Derby win has re-ignited the Eagles and their coach

Posted on September 23, 2018 by Paul Cook Leave a comment

The haunted look of shock and confusion was writ large over Darren Coleman’s face. You see, his team’s simply don’t lose by 50pt margins, so when asked after Wednesday night’s derby win over the Sydney Rays to reflect on what exactly had happened the previous weekend in Mudgee, when the NSW Country Eagles had fallen by the reprehensible scoreline of 62-7 to Melbourne Rising, his genuine look of bewilderment in trying to fathom the reasons why, was somewhat understandable.

“I just can’t understand it, I still can’t explain it.” he mused.

It was the culmination of a testing few weeks in rugby for Coleman, a rarity in recent years for a coach whose star has been very much on the rise.

Rewind just three weeks and he was sitting pretty at the helm of his impressive Warringah team in the Shute Shield. They had just beaten Northern Suburbs in a tense and dramatic semi-final at North Sydney Oval, and he was preparing them for their second successive grand final after guiding them to an incredible and emotion-charged Premiership the previous year. Feelings of confidence and belief of back-to-back titles were running high in the Rats camp.

But then a fine young Sydney University side, hugely talented in their own right but handsomely embellished on the day by Jake Gordon and Tolu Latu in particular, tore up their script to run away worthy 45-12 victors and spoil the party.

Seven days later, Coleman and some of his faithful Rats charges had to dust themselves off and go again in a new competition, helped enormously by the NRC fixtures computer that dictated a trip to Perth and a clash with a revamped and hotly fancied Western Force team that already had several games under their belt in the World Series. Tongue duly removed from cheek.

All things considered, they performed pretty admirably despite going down 54-28, and were straight back on the dreaded red-eye across the Nullarbor to prepare for the road trip to Mudgee and the clash with Rising.

Their first home game of the season, it was also the chance to reconnect with their hugely valued fan base in the bush, and to put on a show that the locals could be proud of, and that the juniors watching on would be inspired to emulate in the future. So to say that the result and manner of performance was jarring, would be an understatement.

“We were at home and we went in positive, but we’ve never had a flogging like that. I still haven’t found the answer,” he rued.

As a result, coach Coleman went into Wednesday’s derby showdown at Leichhardt Oval off the back of three losses in a row, a feeling he hadn’t experienced since 2016 when he was in charge of Eastern Suburbs. While the Eagles went in off the back of the biggest loss in their NRC history – the previous being a 61-29 defeat to Brisbane City in September 2015 – and never having lost more than two games in a row.

In fact, under Coleman the Eagles have been by far the most successful of the four New South Wales representatives in it’s now five-year existence (RIP the Rams and the Sydney Stars). They have reached two semi-finals, and one grand final in 2016 where they went down to Perth Spirit, and in the two years they didn’t reach the pointy end, they finished in 5th by dint of bonus points only. Their winning ratio of 57% prior to Wednesday night, is bettered only by two-time champions Brisbane City.

So the 33-19 win over the Rays was more a restoration of normality, than any great leap forward. But boy, did they need it.

“You pretty much say that if you lose that, you can’t make the finals really,” said a relieved Coleman, standing outside an Eagles dressing room that was celebrating in traditional style with a rousing rendition of Daryl Braithwaite’s ‘Ride the Horses’.

“I was proud of our effort in Perth. With eight minutes to go we were only down by 7pts, and they’d had 10 games together, we’d had three sessions, so I was pretty proud of that performance. It’s always a new group to start with because we have about 50% player turnover from one year to the next, so it just takes you a while to rebuild them and make them believe. But I was just happy for the boys tonight. They’ve been thrown together and worked hard but we were just outgunned the last two weeks. So to get a win – scratchy as it was – was important for our team morale.” 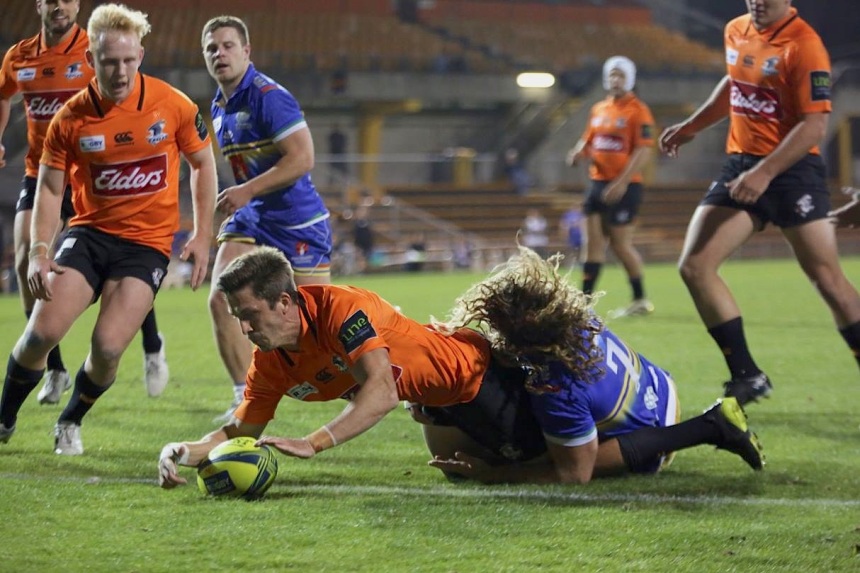 Jake Gordon’s hat-trick was enough to get him in the Wallabies squad – Photo: AJF Photography

Given they too were coming into the game winless, the Rays were understandably determined to break their drought and offered plenty of resistance, fighting back from 14-0 and 21-5 down to trail by just nine points at the break despite coming off second best at the set-piece against an Eagles pack boosted by the inclusions of Messrs Latu, Robertson, Kepu and Hanigan.

A tense third quarter saw the ‘home’ side with plenty of territory but nothing to show for it on the board, as the Eagles maul defence in particular stood up to the challenge. And with the ever-alert Jake Gordon punishing any opportunity at the other end to claim a hat-trick, that maiden win was secured – but without the all-important bonus point.

“Full credit to the Rays,” said Coleman. “I know first hand after the Shute Shield grand final how hard it is to play off a non-dominant scrum that is having a hard time. Some of their attack was really slick and put us under some pressure but again, we were probably our own worst enemy. We were a bit loose in some aspects of our play, and there would be a couple of boys out there that wouldn’t have been happy with the number of possessions that they gave up, so that hurt us.

“The Rays would have been pretty happy with that first half I reckon, and to turn around with that big wind behind them I thought they’d be relatively confident. We definitely had a battle on our hands, but we did well. It was just about getting the ball movement right tonight, which we did, but I was really disappointed that we didn’t hold on for that bonus point at the end. The two years we haven’t made the play-offs, it’s been a bonus point or for and against, and everyone else has been getting a bonus point against these guys. There’s enough good players in that team to not concede late tries, and that last try was the one that hurt the most.

“It definitely helps to have some real quality players out there,” he conceded. “Jake Gordon was excellent, and Tolu Latu, although he made a few errors, he’s definitely a notch above when he’s on. But I want to give a wrap to Sam Thomson who made his debut, and I thought was really good. His lineout work was excellent as usual, but his carries were good too, and he always seemed to slip the first tackle. He was exceptional and I’m really happy for him.”

The irony for Coleman is that he is now benefitting from some of the relative luxuries afforded his previous opponents in the shape of Latu, Paddy Ryan and Harry Johnson-Holmes, all of whom packed down for Sydney Uni against Warringah in dominant fashion a few short weeks go.

“When things were at their lowest on grand final day, after Uni had clocked something like their 15th scrum penalty, I looked at my assistant coach Ben McCormack, who’s also my assistant with the Eagles, and said ‘There’s one upside Benny, three of those props are ours next week!'” he laughs.

“We don’t completely control team selection in terms of injury availability, because the Waratahs have some restrictions around what we can do, so we just deal with the cards that we’re dealt and do our best. But it was perfect timing getting those Wallabies tonight, right in the middle of the three games in eight days, it allowed us to rotate some guys. We lose those Wallabies now but we should have a few boys back to fill the gaps.” 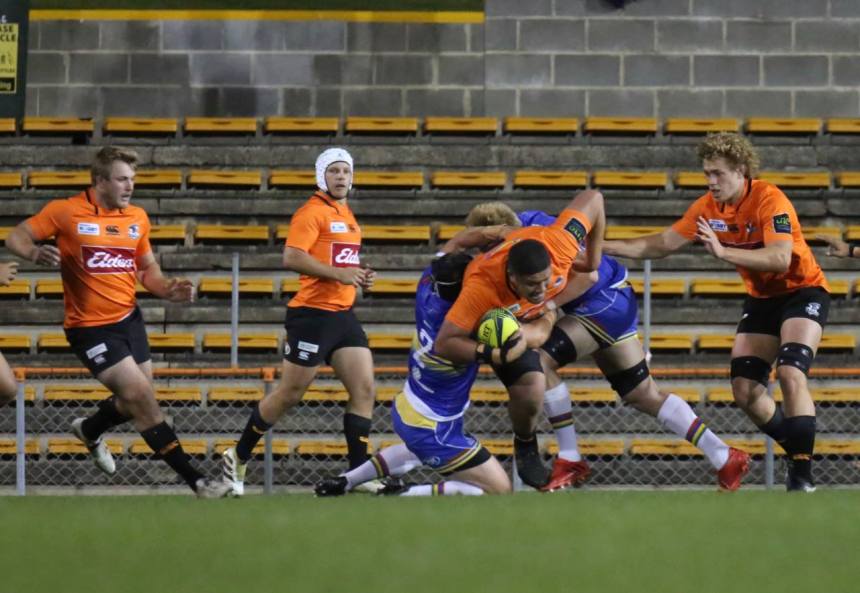 Of course, the elephant in the room here is the rank stupidity of launching a new competition – the third tier of rugby in Australia – on the same day that the showpiece final in the country’s fourth level – Uni versus Warringah in the Shute Shield decider – was taking place.

This meant that every other NRC team had a game under their belts when the New South Wales sides joined the party in week two, and that around a third of those fighting it out at North Sydney Oval were expected to dust off their post-grand final hangovers – be they inspired by celebration or commiseration – and rock up to training to adjust to new team mates and new combinations with a few days preparation. It also – as Coleman pointed out – forced a reshuffle of the fixtures to leave both teams facing a ridiculous three games in just eight days.

As a result, the one remaining NSW state derby – marketed as a historical return to the old City v Country clashes of old – was shoe-horned into a windy Wednesday night slot, at a rugby league ground, and also offered as a TV viewing option. And the crowd was…

The farcical scenario is not lost on those forced to somehow negotiate such hurdles and still produce a winning footy team, or else face the wrath of the all-knowing ‘Twitterati’.

“It just blows me away that we have all these University-qualified business expert management people running our game, and they can’t seem to get a schedule organised that doesn’t clash the two most important comps at the same time,” said a frustrated Coleman, no doubt echoing the sentiments of many.

But deal with it he must, and the Eagles charabanc has quickly readied itself and moved another 480kms north to Armidale for this afternoon’s clash against a potent-looking Canberra Vikings outfit. Minor Premiers and losing finalists in 2017, the Vikings are boosted by the inclusion of Joe Powell, who stays behind on home soil after Jake Gordon’s exploits earned him a well-deserved spot on the Wallabies flight to South Africa.

Powell lines up alongside Wharenui Hawera in an all-Brumbies halves combo that will provide a stern test for the Eagles’ rearguard. But this comp isn’t supposed to be easy, and Coleman will be looking for a repeat of some positive recent history between the two sides to truly ignite their season, and repay the country faithful in the process.

“There’s some really good teams and there’s no gimmes in this comp,” he attests. “But the good thing is Canberra was the game that got us on track last year, in round three in Armidale, and we won after the bell. That kick-started our season and we went on a winning streak, so hopefully we’ve got some momentum now and can go out and get a similar result.

“We’re definitely better at home and we love getting up to the country. It was just horrible last week in Mudgee, and I felt sorry for all the people that came and watched. It was embarrassing.

“We’ve got some standards to get back on track.”