All good things must come to an end, but the Wallabies certainly didn’t help themselves as Wales ended a 13-match losing streak against Australia to edge home 9-6 in a try-less but absorbing encounter overnight.

With both defences on top, chances were at a premium in Cardiff. But across the 80 minutes, Wales looked the more likely to create a five-pointer as the Wallabies’ attacking structures again struggled to make much headway. Decision-making must also come into question, with several shots at goal turned down in a contest that never threatened to break out into the helter-skelter openness largely expected.

As it was, kicking proved to be the difference, Dan Biggar slotting the match-winning penalty with a few minutes left on the clock to raise the closed roof at the Principality Stadium, and end a hoodoo going back 10 years. It was the Wallabies’ eighth loss in 11 matches this year, and only ramps up the growing pressure on all concerned ahead of crucial meetings with Italy and England.

It was Australia who clicked into gear from the off, a nice break down the left flank earning a penalty, and the interesting option of a scrum instead of the lineout. They couldn’t make anything from it, but they should have when they attacked the same side of the field a couple of minutes later, Michael Hooper putting Samu Kerevi away for the corner, only for the centre to leave the ball behind him in his eagerness to score.

Wales began to settle, their new found zest for letting the ball sing coming to the fore as they looked to stretch the Wallaby defence. But the visitor’s held firm, and earned a rare reprieve when Leigh Halfpenny pushed a formulaic 3pts past the post on 13 minutes after they were pinged for offside.

Concerns over the troublesome lineout were being allayed by Wales’ inability to hold their own ball, but as the clock ticked towards the end of the first quarter, the Wallabies hadn’t been able to make any further inroads into the opposition 22. Indeed, it was the scrum that started to become an achilles’ heel – much to Michael Cheika’s frustration – with a couple of penalties in succession awarded to the hosts, the latter punished by a recalibrated boot from Halfpenny to open the scoring.

Australia shrugged it off, and built their best passage of play shortly after with 17 patient phases getting them deep into the red zone before Adam Coleman spilt the ball. That error was compounded by another scrum penalty when Scott Sio went to ground, and not for the first time this year, the Wallabies’ ability to release the pressure valve by their own hands was costly.

A damaging carry from Izack Rodda just after the half hour, bent the Welsh line and left a couple of red jerseys stranded offside. Bernard Foley stepped up and cooly slotted his maiden opportunity, and without coming close to hitting their straps in the rhythm stakes, Australia found themselves all-square on the scoreboard at 3-3.

However, a needless penalty conceded by Tolu Latu – who had been going well to that point – when he went off his feet right in front of the referee, soon gave Halfpenny the chance to restore the advantage. But incredulously, the normally reliable sharpshooter pushed another one past the uprights, from right in front, and the tourists somehow went to the sheds on level terms.

Wales went for the jugular straight after the restart, the effervescent Justin Tipuric making waves down one sideline, and a Gareth Anscombe switch-kick encouraging George North and Leigh Halfpenny to combine down the other, the immoveable David Pocock coming to the rescue this time.

His leap to the skies proved to be North’s last contribution, what appeared to be a tweaked hamstring bringing a more than adequate replacement in the shape of Liam Williams to the fray. But his first involvement was in defence mode, as Kurtley Beale tried to unlock the stout Welsh rearguard with some trademark footwork.

An offside penalty which was just out of range for Foley was understandably kicked to touch. But when they were offered a second shot at the posts and a chance for the lead from an eminently kickable position a couple of minutes later, captain Hooper surprised almost everyone when he took the lineout option.

You can live or die by such decisions, and you better make it pay if you choose the harder road instead. So when the ensuing driving maul was ended by a knock-on, question marks had to be raised again as to the leadership group’s decision-making under pressure.

Perhaps if this had been a World Cup semi-final the option would have been different. But these tightly-fought contests are the perfect opportunity to rehearse for such future scenarios. And under those conditions, the mantra has to be take the points when they are on offer.

They turned down another shot at the posts when Wales went off their feet. But again, they made a mockery of the decision when the lineout was overthrown and Wales cleared upfield, chased, mauled, and earned a scrum just outside the Wallaby 22. Games are turned on such momentum shifts.

The cavalry arrived in the form of a revamped front-row. The raw power of Taniela Tupou, coupled with the controlled aggression and scrummaging nous of Tatafu Polota-Nau, skittling Wales backwards off their own ball to win a much-needed tighthead. 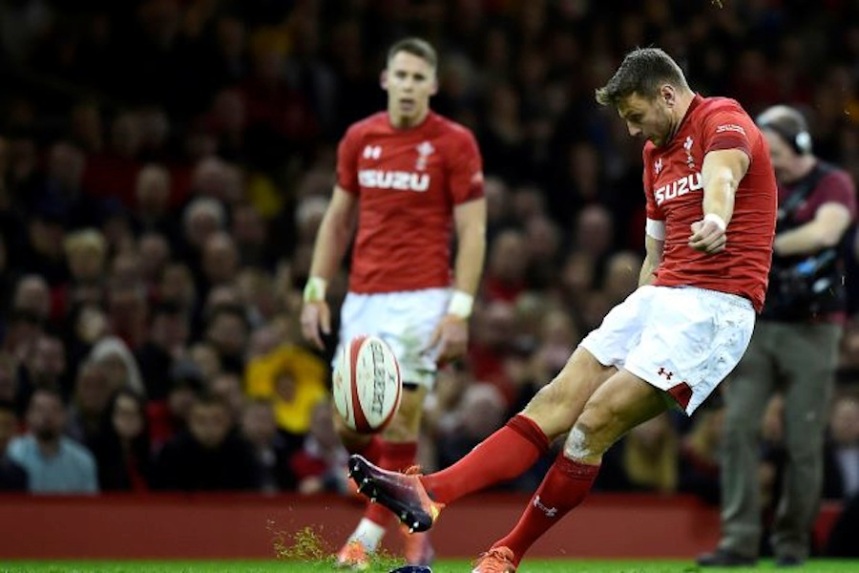 With 20 to go it was anyone’s game, with neither side having managed to exact a strangle-hold on proceedings. Wales looked the more likely to kick for home, their attacking patterns when they did have possession a touch slicker than Australia’s. But with match-winners across their backline, a late Wallaby surge was far from inconceivable.

Brilliant work from Hooper thwarted a menacing looking lineout drive as it rumbled close to the Wallaby line, but it was the home side who were starting to put their foot to the floor. A bulwarking charge from Ross Moriarty on 68 minutes left Pocock momentarily stunned, and earned a penalty when Polota-Nau was ruled offside from the ensuing ruck.

That left Halfpenny with a replica kick to the one he shanked before half-time, and even though it was far from crossing the black dot up the middle, it was enough to edge Wales into the lead with just over 10 to play.

A late hit from Kerevi on the clearing Halfpenny then drew the ire of the home crowd, particularly when referee Ben O’Keefe, correctly I believe, ruled that it was Kerevi’s momentum rather than any malicious intent that caused the contact. And the partisan crowd weren’t exactly placated by the penalty awarded to Australia in the same play either, after a trademark steal off the floor from Pocock.

With Foley having been replaced by Matt Toomua a few minutes earlier, it was the current Leicester Tiger and future Melbourne Rebel that stepped up to the kicking tee, and superbly sent the ball through the posts to make it 6-all and ensure a grandstand finish.

Buoyed by a suddenly cantankerous home contingent, Wales went in search of redemption, and were offered an olive branch when Wallaby replacement Ned Hanigan failed to roll away after a tackle, and Dan Biggar – on for the fazed Halfpenny – struck a potentially match-winning 3pts.

Australia’s hopes of avoiding a hoodoo-ending defeat weren’t helped by an errant throw from Polota-Nau at the lineout, and with the clock ticking down, Wales did enough to hold possession, hold their nerve, and kick to touch for a landmark victory.