Cooper back with a vengeance as Rebels demolish Reds

Quade Cooper may have left Queensland rugby as a diminished hero forced to play club rugby. But he returned in style to reclaim his Suncorp Stadium throne in opposition colours yesterday, orchestrating a dominant 32-13 win for the Melbourne Rebels over the Reds, that sees the Victorians go back to the top of the Australian conference.

Having controlled the first half, the visitor’s didn’t get their pay on the scoreboard until either side of half-time. A three-try salvo in eight minutes took the game away from a disjointed Reds side, that couldn’t find the cohesion in attack that had brought them two wins in a row.

The Suncorp crowd was left to rue better days of yore, as they witnessed their old halves pairing of Cooper and Will Genia deconstruct their current charges with game management, nous and experience. And in Jack Maddocks, they have a player with the happy knack of getting on the end of most of their good work. His two tries took him to the top of the Super Rugby charts, and helped the Rebels tick another box on their path towards a maiden finals appearance.

Former local hero Cooper didn’t waste any time getting himself into the contest, opting for a charge straight into the Reds line with his first touch. And when the home side were pinged for offside in the 2nd minute, he stepped up to open the scoring.

That was soon cancelled out when Maddocks was isolated running it out of his own 22 – Liam Wright with some fine work over the ball – and Bryce Hegarty – ironically a former Rebel – made it 3-3. But it was the visitor’s asking most of the questions in the early exchanges, enjoying plenty of possession inside the Reds half but just struggling to find that final execution in the red zone.

It took a try-saving tackle under his posts from Tate McDermott to stop Cooper from changing that dynamic on 14 minutes, the flyhalf spinning away brilliantly from Samu Kerevi to drive at the line. But the pressure was relentless, and another offside in front of the uprights allowed him to edge his new side into the lead once again.

Staring down the barrel of a 90% possession stat in favour of their opponent’s, it took a barnstorming run from Sefa Naivalu – another to have experienced this fixture before from the other side – to finally get Queensland within range of the tryline at the other end of the field. But after earning a penalty and boldly kicking to touch, they botched the lineout and Maddocks smashed it into safety downfield.

So when they were gifted another opportunity just after the half hour when the Rebels strayed offside, discretion was the better part of valour, and Hegarty levelled the scoreboard very much against the run of play.

The Rebels kept on coming though, a typically fired-up Genia constantly probing for weaknesses, and cajoling his teammates towards greater efforts. And after the forwards had battered their way towards the chalk and won a penalty, Cooper played the advantage to hoist an inch-perfect kick to the corner for Maddocks to do his best Israel Folau impression and dot down.

That five-pointer right on half-time was the icebreaker, and the catalyst for a second half onslaught that finally got the Rebels the reward their industry had deserved.

It took just three minutes after the restart before they added a second. Great work from Marika Koroibete earned a lineout 10 metres out from the Reds line, and the forwards put all hands on deck for a driving maul that was only stopped illegally. Skipper Angus Cottrell called for the same play off the ensuing penalty, and they couldn’t be thwarted a  second time, Anaru Rangi claiming the try.

Whether it was pre-planned or the result of what he’d just seen, Reds head coach Brad Thorn changed his entire front row, bringing Wallabies Brandon Paenga-Amosa and Taniela Tupou into the fray. But before they’d even had a chance to get their hands on the ball, the Rebels had another.

The home side were looking to put something together in midfield in response, but the Rebels’ linespeed spooked them enough for Duncan Paia’aua to spill in contact. The loose ball was kicked through by Cooper, who suddenly saw open field ahead of him. But realising he also had the speedier Maddocks alongside him as they chased, he dutifully kicked again on the run for the young tyro to race clear, get the bounce, and dive home for his eighth of the season.

Cooper’s conversion made it 25-6, and it was hard to see how the Reds could come back into the contest, such was the Rebels hold on proceedings. They were controlling territory through the kicking game of Cooper, Genia and Reece Hodge, starving the Reds backline of ball – in particular the unusually quiet Kerevi, and applying enough pressure through dominant tackles or linespeed to force a litany of turnovers.

When the Reds did think they had found a way to stay alive, it was off the back of Kerevi’s first opportunity to stretch his legs. Neat footwork from McDermott released his skipper over halfway, and he was backed up out wide by Filipo Daugunu. And when the pack took over to bludgeon their way forward inch by inch, Paenga-Amosa found the space to scoop up and find the line. However, referee AJ Jacobs wasn’t convinced, and the replays showed a knock-on from McDermott in the build-up. No try. 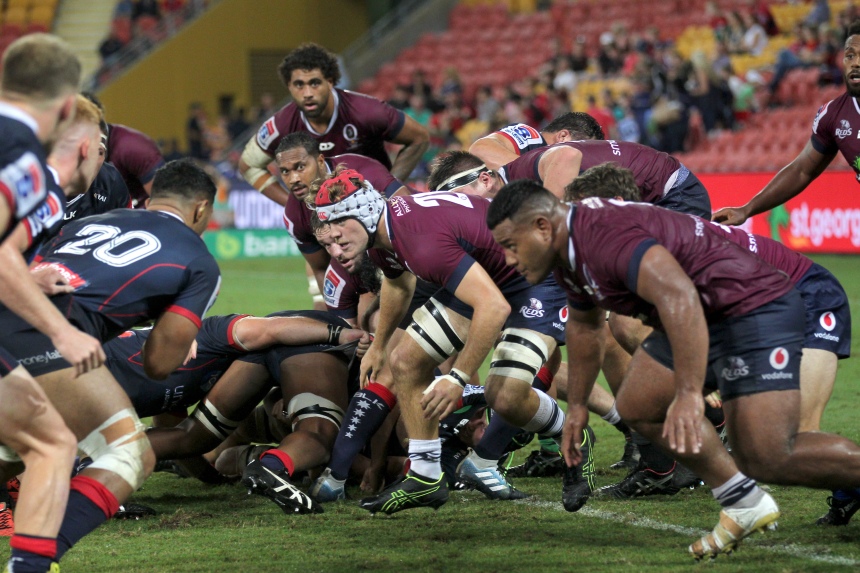 The Rebels spent plenty of time near the Reds line – Photo: Sportography

The Rebels should have wrapped things up with 15 to go. A scrum just outside the Reds’ 22 was sent to the openside, where a decoy run from Bill Meakes opened up the field and created a three-on-two. But Hodge passed far too early to Koroibete instead of drawing his man, allowing Hamish Stewart to drift and shut down the path to the corner.

Back-to-back penalties then gave Queensland a chance to apply some rare pressure in the opposition red zone. And after further infringements got them within 10 metres, a quick tap penalty from the lively McDermott saw him dart for the line and the big boys backed him up, Tupou going low through a mass of bodies to find the chalk.

Given there was only just over five minutes remaining, the score amounted to little more than a consolation in terms of deciding the result. But in the context of the Australian conference, it did remove a potentially precious bonus point for the Rebels.

No doubt mindful of that, the visitor’s upped the ante as the clock ticked down, applying a stranglehold to the Reds inside their 22, and eventually forcing the error that allowed them to pounce.

Pick and drives were now the order of the day, replacement scrumhalf Michael Ruru orchestrating his forwards for one last assault, and after the Reds had defended manfully on their line for several phases the dam burst, Rob Leota driven over to rubber-stamp the victory, reclaim the bonus point, and take his side back to the top of the Aussie ladder.