London 7s Day One: Aussies into Quarters after promising start

The Australian Men’s Sevens side have begun the penultimate round of the World Series in London in promising style, winning two from three on Day One to set up a Quarter Final against South Africa, with Maurice Longbottom racking up six tries in the process.

Impressive wins over Wales (28-10) and Spain (42-12), put the Aussies in a strong position before they took on Series leaders USA in their final Pool A clash. And despite putting in a gallant display as they went down 19-17, they had done enough to book a place in the last eight of the Cup.

“We had our opportunities to go three from three today but handling errors just let us down in critical moments,” reflected head coach Tim Walsh. “We started strongly and showed some great flair in attack across the three games. If we can tidy up those errors we will be able to really ask some questions tomorrow of opposition defences.

“Maurice Longbottom had a standout game today in the gold jersey, his attack was exceptional, and he worked very hard in defence across the three games. We’re enjoying being here in London and love being a fan favourite and villain so will get into our recovery and prepare for tomorrow.”

Australia and Wales was the opening match of the tournament at Twickenham, with the Aussies wary of a Welsh side in desperate need of points as they look to avoid relegation from the World Series.

A converted try from skipper Lewis Holland got them off to a good start, but ill discipline cost them a chance to build on it. Four penalties conceded and a yellow card to Henry Hutchison kept Wales firmly in the hunt, and a five-pointer from Tom Rogers right on half-time had them just 2pts behind.

They took a shock lead shortly after the restart, Joe Goodchild racing to the corner to help them to a 10-7 advantage. But the sending of Cai Devine to the sin bin for two minutes was disastrous, a quickfire double from the fleet-footed Maurice Longbottom putting Australia in the ascendancy, and a try in the last minute from Matthew Hood cementing a 28-10 victory. 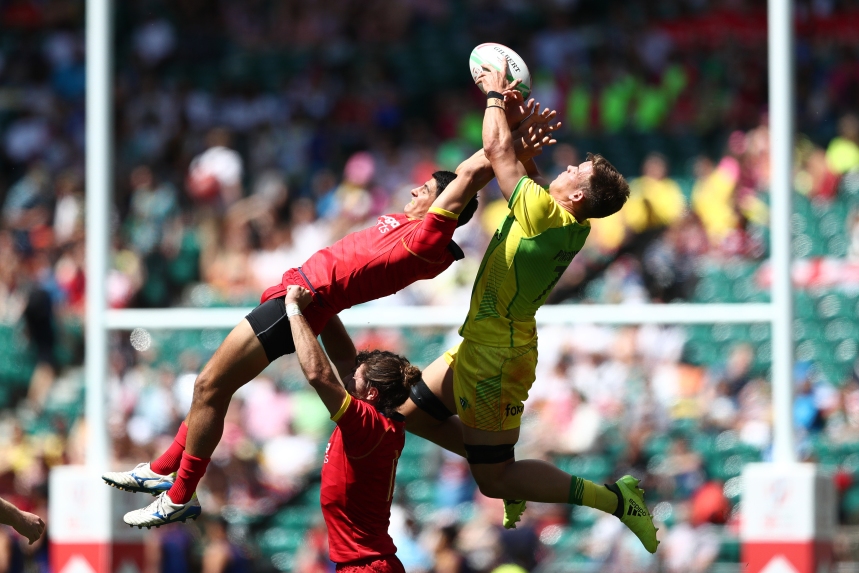 Spain were next up, and they too carried the fight to a more-favoured opponent, catching the Aussies napping with a try in the first minute from Javier Carrion. Ben O’Donnell replied for the green and gold within a couple of minutes, but Spain were in front again when the wonderfully-named Alejandro Sanchez De La Rosa Hernandez went over.

Australia had the finishing prowess of Longbottom, and accurate boot of Josh Coward, to thank for a narrow 14-12 half-time advantage. But Longbottom was in the mood for more, and he bagged his fourth try in two games early in the second half when Spain were caught in possession and ruthlessly punished.

That was enough to douse any remaining Spanish flames, and the Aussies duly put them to the sword with further scores from Hutchison and Holland, before Longbottom added the icing to the cake with his hat-trick to complete a 42-12 rout. 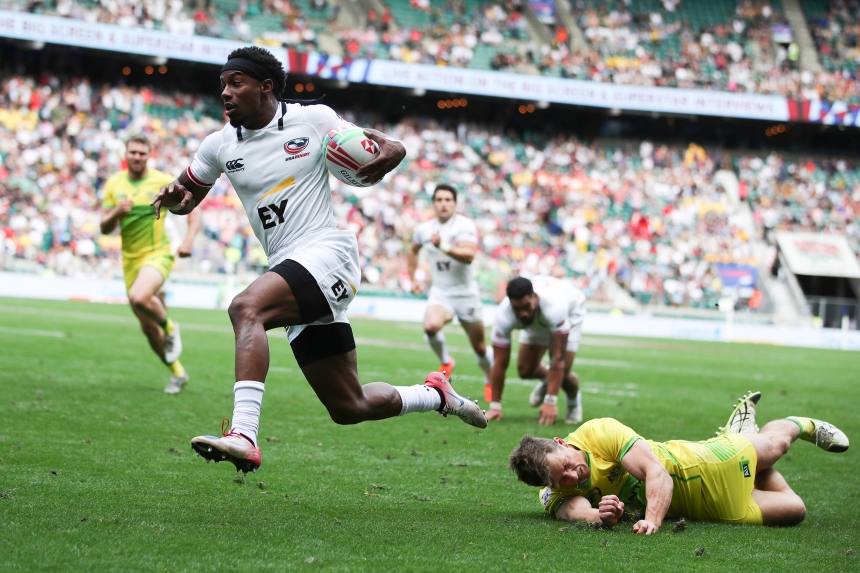 With Series leaders USA also coming through unscathed against the same opposition, although not exactly setting the world alight in the process – winning 29-5 against Spain and only 28-26 over Wales – the stage was set for a Pool A decider. But Australia were behind the eight-ball from the start, the searing pace of Carlin Isles taking him through the gold line, and away for yet another Series try in the opening minute.

The Aussies fought hard to get back into the contest, and it was captain Lewis Holland leading by example to get them on level terms in the 5th minute. But the US kicked again, and a converted try to their skipper Danny Barrett had them 12-5 in front at the break.

The second half was even-stevens until Steve Tomasin saw yellow for the USA, and Maurice Longbottom pounced for his sixth of the day soon after. And when Simon Kennewell then went over to put Australia 17-12 ahead, a seismic win was on the cards.

But Tomasin returned from purgatory with a vengeance, striking back off a run from his own half in the closing minute to level the scoreboard, and Madison Hughes added the extras to seal the narrowest of victories, and top spot in the Pool. However, Australia’s efforts across the day and results elsewhere meant they still qualified for the Cup Quarter-Finals in second spot, and a shot at an elusive title.