Fiji have triumphed in London to claim their fourth title of the current World Series, downing Australia 43-7 in the Cup Final to overtake the USA at the top of the ladder with one round remaining. But despite the margin of defeat in the title decider, it was a weekend of significant progress and many positives for an Aussie side starting to make good on the promise they have shown all season.

Having won two from three in day one’s Pool stages, they were paired in the Quarter Finals with a South African side that had blasted all and sundry in their three Pool matches, racking up 134 points in the process. But they came through brilliantly 29-22 to set up a meeting with France, where they again triumphed in another tight contest 31-24 to reach their first Cup Final of the 2018/19 Series.

The challenge of the Flying Fijians ultimately proved to be a step too far, Australia playing catch-up all game as they went down by seven tries to one. But despite the disappointing end to their weekend, head coach Tim Walsh was justifiably proud of his side’s performance across the tournament.

“Fiji were a class act in that final, showing again once they get momentum they are hard to stop and thoroughly deserve their victory here in London,” he said. “We were really pleased to make the final but it showed that you must respect possession against top sides like Fiji or they will punish you. Our defence worked hard in the match, but to be winning those Cup Finals you have to be consistently asking questions will ball in hand, not just in defence.

“Having said that I am very proud of this side’s efforts this weekend to make the Cup Final. We have finally showed some of the potential we have seen flashes of across two days of Rugby and that now needs to be the standard of things to come moving forward. We’ll take some valuable lessons out of London and use that to get ready for Paris and the qualification battle to come later in the year.” 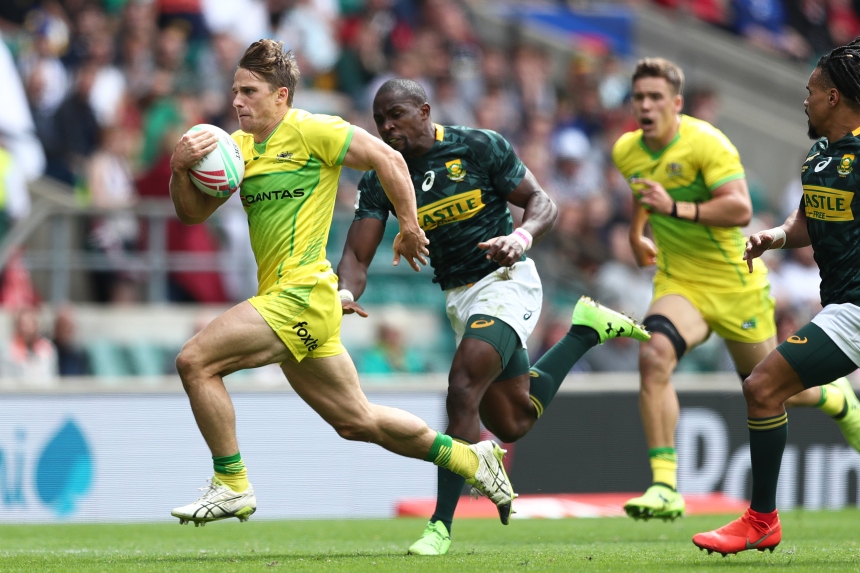 Given the scoring prowess of the Blitz Bokke, a try straight from the kick-off for the Aussies was a welcome start in the Quarter Final, Lachie Anderson batting it back for Henry Hutchison to go over. And it got even better when Joe Pincus added another a couple of minutes later, as the Aussies enjoyed the upper hand in the physicality stakes.

But you can’t keep the reigning Series champions down for long, the elusive running of Siviwe Soyizwapi taking him to the corner for their first five-pointer, and Justin Geduld adding another soon after thanks to some single-minded persistence. However, the see-sawing encounter took another twist before the break, Matthew Hood running in to leave Australia 19-12 to the good.

Hutchison was on the end of some fine back line play to bag another after the restart, and they had one foot in the last four when Ben O’Donnell then jinked his way through the South African defence for another to make it 29-12.

It was Maurice Longbottom’s try-scoring exploits that earned him the plaudits on day one. But he showed he can be just as valuable in defence too, stripping the ball from JC Pretorius as he tried to ground over the line, and forcing a knock-on to further frustrate the Blitz Bokke.

There was still time for them to run in two late scores through Muller du Plessis and Pretorius, but the damage was already done, and Australia were into the semi-finals with a prized scalp under their belts.

Having vanquished the previously dominant South Africans, the challenge of France for a place in the Cup Final was, on paper at least, seemingly less daunting. But they were up against a Les Bleus side that had also upset the applecart in their Quarter Final with victory over New Zealand, so confidence certainly wasn’t running on empty.

It was the Aussies who struck first, again pouncing straight from the kick-off for Lachie Anderson to cross the chalk inside eight seconds. But France were back on terms a minute later, a magical reverse pass from Samuel Alerte sending Stephan Parez away for the line.

The increasingly influential Hutchison was in next, some trademark swerves on display as he went under the posts with Australia starting to click through the gears. Simon Kennewell added a third in the 5th minute when he found space out wide, and they were in cruise control by half-time, when Longbottom carried on where he left off the previous day with another dazzling dissection of an opposition defence to make it 24-5.

France rallied after the break, Parez in for his second to reduce the arrears, before Thibaud Mazzoleni skirted around a suddenly tiring green and gold line to make it 24-17 with just two minutes remaining.

But just as they looked like being reeled in, Australia kicked for home, literally, Lewis Holland putting boot to ball for Josh Coward to collect and touch down. Veteran Terry Bouhraoua did cross again for Les Bleus with the last play of the game to make it a single-score margin. But time had run out, and the Aussies were in their first Cup Final of the 2018/19 World Series, and their first in London since 2015. 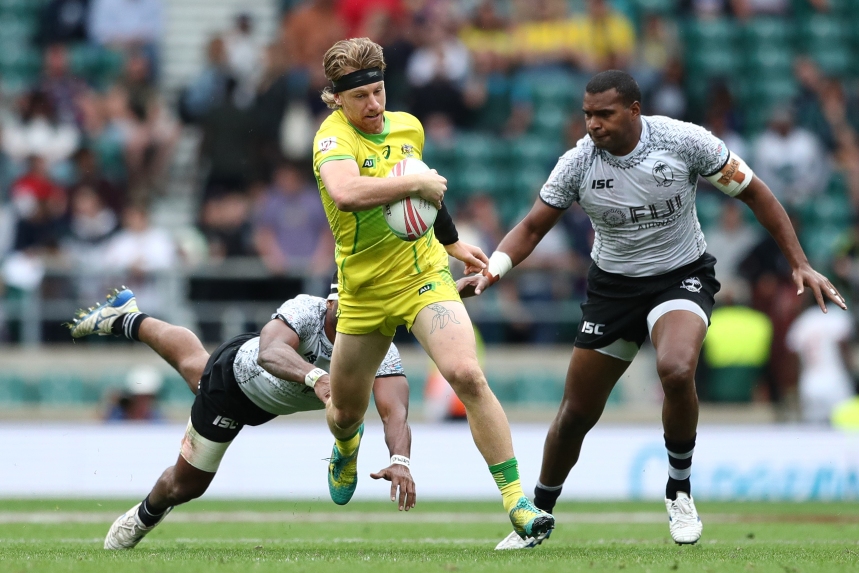 All that was left then, was the small matter of overcoming Fiji in the title decider. Ho-hum. And despite some sterling defensive work in the opening exchanges by the Australians, it was the reigning London champions who opened the scoring, Vilimoni Botitu a touch too spritely to contain.

Having regathered the restart, Fiji began to flex their attacking muscles, stretching the Aussie line with multiple offloads and ever-willing support runners, and barely a minute had passed before they were in again, Aminiasi Tuimaba carrying a couple of defenders with him as he powered over the chalk.

Australia then enjoyed some rare territory and possession as they looked to hit back, Hutchison going close but turned over near the line. And Fiji went back into overdrive, Tuimaba racing away for a second, before adding a third – and Fiji’s fourth – before half-time, to leave the Aussies staring down the barrel at 24-0.

They got something to cling to straight after the restart, a line break from O’Donnell opening the door for Pincus to go under the posts. That was almost cancelled out when Alasio Naduva ran free, only for a brilliant tackle from Lachie Miller to deny him. But the writing was well and truly on the wall when Fiji pounced on a botched Australian lineout for Josua Vakurunabili to power his way over.

The Sevens rugby lesson wasn’t over yet, Naduva piling on the agony with a late double to wrap up a 43-7 victory, and take Fiji back top the top of the World Series standings. But Australia can take plenty of heart from their achievements across the two days, and thoughts must now turn to next weekend in Paris, and the chance to end the Series on a high by going one better and lifting the title. 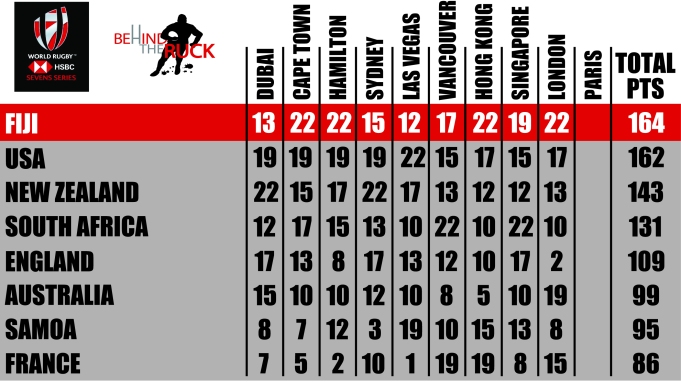