They needed all their patience and resolve to get the job done, but Sydney University finally overcame some dogged resistance from Southern Districts last Saturday afternoon, coming home with a wet sail 50-10, to keep their title defence on track.

A game that was very much in the balance at 15-10 in the 45th minute, after the Rebels had dug in and defended manfully to stifle Uni’s customary attacking elan, was broken open in the last quarter, as the home side put their foot to the floor to rack up the half century in front of their own supporters for the second time this season.

The tone was set from the off, Uni holding the ball for over two minutes as they looked to stretch the visitor’s across the park. But the Rebels were up to the task, hitting hard and conceding precious little ground before forcing an error.

A kick through from winger Nathaniel Tamwoy had Souths in reverse in the 4th minute, and a knock-on as they tried to clear their lines gave Uni the platform of a scrum just 10-metres out.

The home forwards duly went to work, marching the opposition back over their line to earn another penalty. And when they repeated the trick from the second engagement, halfback Dan Calavassy was on hand to dot down and give Uni the early lead.

Christian Kagiassis passed up the opportunity to hit back for Souths on his old stomping ground, when he pulled a penalty just wide of the uprights after Uni had strayed offside. But as the opening half unfolded, it was the hosts’ ill discipline that was gifting their opponent’s a leg-up in the contest.

Four penalties in a row allowed the Rebels to build up a head of steam inside Uni’s 22, and after successive warnings to skipper Dave McDuling, a fifth indiscretion led to an inevitable yellow card for openside Hugh Summerhayes. This time Kagiassis’ radar was back to it’s usual accuracy, and with almost a quarter of the game gone, Souths would have been rightly pleased with themselves given the 2pt deficit. 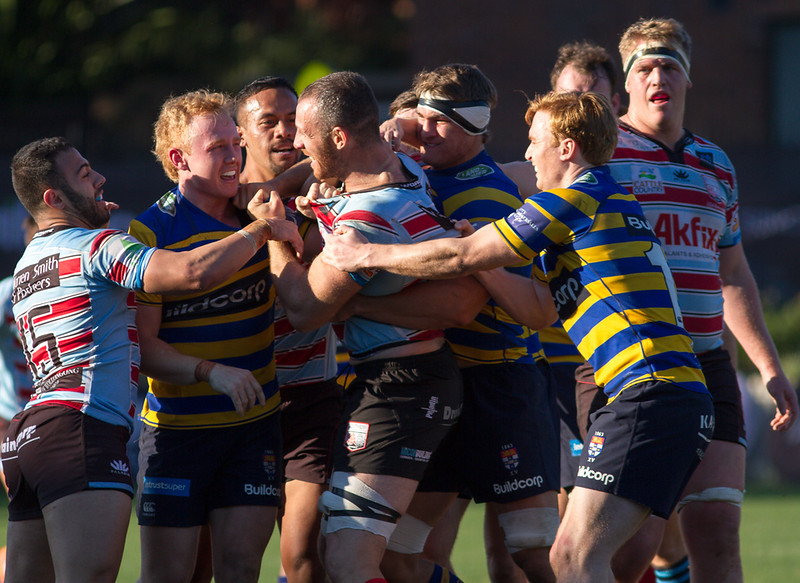 ‘Hold me back!’: There was plenty of feeling in this one – Photo: Malcolm Chuck

Plenty of feeling started to creep into the game, and plenty of handbags as a result, with Will McDonnell and James Hasson in particular, delighting in their own personal duel at every opportunity. But the reality was that Uni had lost their way after a promising opening, and were now seeing precious little ball with which to reverse those fortunes.

Meanwhile Souths were clearly fired up and running on adrenaline, albeit without having posed too many questions for the home defence in terms of try-scoring opportunities. And when they then won a scrum penalty in the 22nd minute, Uni’s go-to weapon of choice was also in danger of losing it’s efficacy.

The hosts got themselves back on track off the lengthy boot of James Kane, when a period of kicking tennis ended with the Uni fullback booming another broadside upfield, and Rebel Will Thomas spilled it into touch. A rampaging Harry Potter hit a crash-ball off the ensuing lineout, and a penalty for a high shot – and some more off-the-ball antics involving Hasson and Nick Champion de Crespigny – led to a chat with both captains, and Kane dissecting the uprights for an 8-3 lead.

With Summerhayes returning to the fray for the home side, the damage limitation of his absence had been well managed, and you wondered if Souths had missed a trick by not inflicting more punishment in their period of ascendancy.

A cheeky tap-and-go from Kane as he shaped to kick a penalty to touch then caught Souths napping, and as Uni looked to finish the half on a high, their forwards took over to plough a furrow for the line, only for Matt Sandell to be ruled held up. But the screw was being visibly turned, and despite the momentum having swung Souths way at scrum time on the last few occasions, this Uni pack have an adeptly-coached knack of picking their moments.

So when they were presented with another five-metre scrum they duly went into attack mode, earning successive penalties and a yellow card warning for the next infringement. And much in the same way they had constructed their opening score, another dominant shove opened the door for Calavassy to step in and fire it wide for Tamwoy to dot down.

Kane’s conversion made it 15-3 as the half-time siren sounded, and after a sticky middle third of the opening stanza, the Students had given themselves the platform from which to kick on, and perhaps flex their attacking muscles a touch more after the break.

However, it was the Rebels who returned with the bit firmly between their teeth, seemingly aware that they had to score next if they were to try and stay alive in the fight. And they did.

A lineout on the 22 was swept infield for Denny Godinet to make good metres, and kick-start a barrage of strong carries from Souths, with the combative James Wayland to the fore. And after multiple phases to stretch and soften the resistance, a neat one-two between Apo Latunipulu and Hasson – who produced a lovely reverse pass to take out three Students – gave skipper De Wet Roos the chance to scurry free and jink his way over the line with aplomb.

Kagiassis added the extras and all of a sudden, a game that appeared to be drifting away from the visitor’s, was firmly back in their sights.

Uni tried to re-ignite their flickering flame with some trademark inroads from their forwards – Wayne Borsak, de Crespigny, and skipper McDuling all carrying hard at the heart of the Souths defence to get them within range of a quick riposte. But a textbook steal off the floor from Aussie U20’s rep Nathan Lawson, meant the bum taps belonged to the visitor’s.

However, a side that were averaging just under 30pts per match before kick-off, were unlikely to be diverted from their mission for very long. And from their next foray into enemy territory, they struck again.

When Will McDonnell received the ball just inside his own half, the pass seemed to be positioning him for an attack down the short side. But he had other ideas, stepping back against the grain to leave five Rebels flat-footed, before stepping inside another and finding replacement Rory Suttor.

He in turn fed fellow loose forward Champion de Crespigny on the 10 metre line, and the rangy no.6 went into overdrive. After palming off Thomas and Roos, he broke into a full gallop to carve a path through a fractured defence, burn off a winger in the shape of Apaola Tea Lama, and dive under the posts for a memorable score.

With just under half an hour to go, Souths still had plenty of time up their sleeves to make something happen. But their admirable desire to play what’s in front of them when the opportunity arose, got the better of them shortly after the restart, and it cost them dearly.

A scrum just inside their own half earned a penalty. But instead of kicking to touch, the alert Roos spotted plenty of space in behind Uni’s advancing defensive line, and duly tapped and fired it wide for Kagiassis.

Should the fullback’s subsequent chip over the top have achieved it’s targeted destination, Souths may well have had a run-in. Instead it was plucked from the air by McDonnell, who tore back over halfway with no-one home, and unselfishly fed the lightning-fast Tamwoy on his outside for his double.

Kane punished them further to make it 29-10. But to their credit Souths dusted themselves off and went again, enjoying the majority of territory and possession for the next 10 minutes, with Latunipulu starting to find some holes with his aggressive running lines, and replacement Harry McLennan smoking anything that moved in blue and gold.

However, they couldn’t find another breakthrough, and after a good hour of blood and thunder to keep Uni within reach, their efforts began to come back and bite them. And if there’s one side that recognises a wounded animal and goes in for the kill unmercifully, it’s the reigning Premiers.

The home side were slowly moving up en masse into their opponent’s faces, choking their kick return options and any space for a counter. And when a kick-chase from Harry Potter forced Kagiassis to use his unfancied right foot to find touch, Uni pounced to drive a maul off the lineout some 20 metres before pick and driving their way over, only to be held up.

But it was a play that visibly drained the Rebels’ energy levels, and when they packed down for the resulting five-metre scrum, and went backwards to concede a penalty, the warning signs went up. When they were forced into a repeat performance from the next engagement, the referee had seen enough to run to the posts and signal a penalty try.

That was the straw that broke the camel’s back, and if Souths can rightly take much from their first hour of this match, the way the wheels fell off in the closing stages will also need to be a point of some discussion going forward.

With five minutes to go, Harry Potter stepped brilliantly through traffic to find fellow winger Tamwoy on the edge. He chipped over a couple of Rebels in his path in search of a hat-trick, only for Potter to get there first and fire it infield for replacement Ben Hughes to stretch for the chalk, and claim try number six.

And they weren’t done there, Potter deservedly getting on the scoresheet himself as Uni broke from deep en masse, and the winger was on hand out wide to stretch his legs and swerve past the last man for yet another.

James Kane racked up the half century with the extras, poetically so on what was his 50th grade game for the club, and Uni had racked up 21pts in the last nine minutes. They’d been made to work for it, but while it was a win that was thoroughly deserved, it was a scoreline that did reflect harshly on their opponent’s. However, rugby is and always will be, an 80 minute game.