Junior Wallabies down Pumitas to reach U20 World Championship Final

The Junior Wallabies have downed host nation Argentina 34-13 in a wet and wild Rosario, to book their place in the U20 World Championship final, Australia’s first since 2010.

They had to do it the hard way too, battling difficult conditions that delayed the kick-off for half an hour, and then dealing admirably with their second successive red card to run out winner’s by four tries to one. Harry Wilson, Michael McDonald, Lachlan Lonergan and Ben Donaldson all crossed for the Aussies, with the Pumita’s only response coming via a penalty try.

“It was a tough effort by the boys today,” said head coach Jason Gilmore. “To keep Argentina scoreless apart from the penalty try shows the character of the group.

“The forward pack again stood up to the challenge with the backs covering a man down for 50 minutes. I’m really proud of the players and staff with the effort they are putting in. But everyone knows we have one more to get.”

With lightning calling a halt to proceedings earlier in the day, and Rosario experiencing 24 hours of rain in the lead-up to kick-off, conditions for both sides were less than favourable as they ran out onto the Racecourse Stadium ground. They were helped somewhat by the all-weather turf, but the slippery ball still made handling a lottery at times, and understandably, the game took a while to open up as a result.

Australia enjoyed most of the early possession, with the forwards happy to truck it up and ask questions. But an Argentine defence that had been a highlight of their performances in the pool stages, was up to the task. 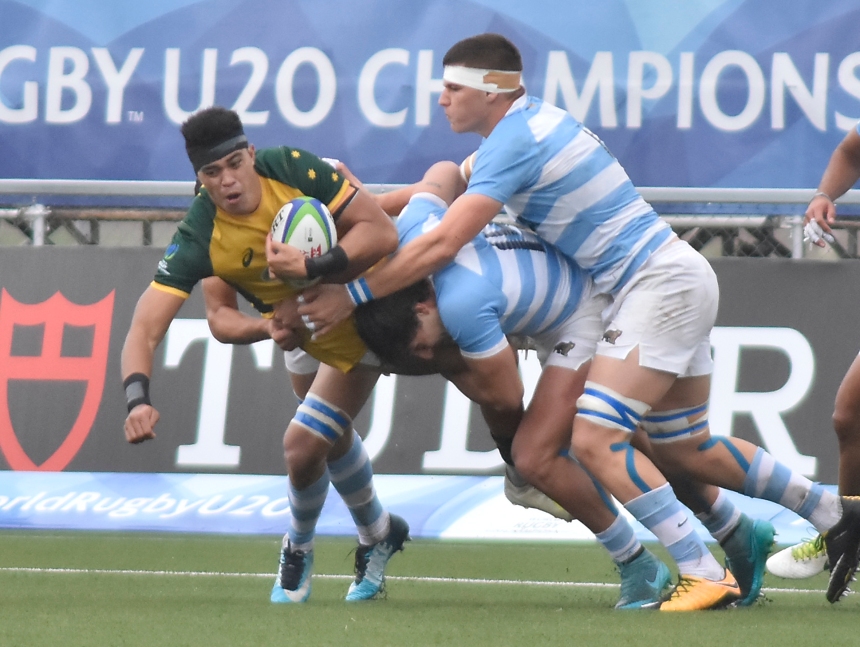 Camping in the opposition half, the Aussies started to find some holes with tidy handling and an ability to offload in the tackle, but a penalty from Ben Donaldson – in at flyhalf for the injured Will Harrison – was the only change to the scoreboard as the game drew towards the end of the first quarter.

He missed a chance to extend the lead on 16 minutes, after another Argentine infringement at the breakdown, and when scrumhalf Michael McDonald went to the bin for a dangerous tackle a couple of minutes later, the door was opened for the home side to take advantage.

They did so with immediate effect from the resulting penalty, Joaquin De La Vega Mendia dissecting the uprights to make it 3-all. However, it was the Aussies who took control of the situation, attacking from the restart to work their way into the Argentine 22. And when Isaac Lucas put hooker Lachlan Lonergan through a hole, he stepped with aplomb and had flanker Harry Wilson off his shoulder to go under the posts.

Despite being down a man for 10 minutes, the Aussies had enjoyed 72% possession and 64% territory as the game ticked towards the half hour mark. Argentina’s powerful scrum was the only thing offering them a semblance of an attacking platform, but their tenacity at the breakdown finally gave them a chance to rack up some points before McDonald returned, De La Vega Mendia with the successful penalty to make it 10-6.

The Pumitas then enjoyed their best period of the match, ramping up the pressure at the set-piece and utilising a potent maul. But the Aussies fronted up, led by a Herculean effort from skipper Fraser McReight, who seemed to be featuring in almost every play – whether in attack or defence. However, the last five minutes of the half would change the complexion of the match completely – and again, McDonald was the player in the thick of the action.

In the 36th minute he hit Noah Lolesio on a lovely line, backed up the centre as he surged ahead, and was on hand to take a return pass and dive for the line to help the Junior Wallabies out to a 17-6 advantage. But celebration soon to turned into disaster.

Argentina mauled a good 30 metres into the Australian 22, before peeling off for winger Rodrigo Isgro to dive home, only for McDonald to seemingly pull off a try-saving tackle and hold him up off the floor. However, the TMO intervened to indicate that McDonald had gone high in the process, and not only was he duly shown a second yellow card and sent from the field, Australia copped a double whammy with the awarding of a penalty try.

Returning for the second half with a 4pt lead at 17-13, and a man down, the Junior Wallabies would have to dig deep if they were to become just the second Aussie U20 side to make a World Championship final. But boy, did they do that and then some.

Henry Robertson had come on to take up the reins at scrumhalf, with winger Sione Tui the unlucky sacrificial lamb, and it was the newcomer’s charge-down just a couple of minutes into the second half that got the Aussies on the front-foot at the right end of the field.

From virtually the same position from which Argentina had ploughed a forwards furrow prior to their penalty try before the break, Australia showed that they too could maul just as effectively when the chance arose, driving the Pumitas’ pack backwards over their own line for Lonergan to claim the five-pointer.

Isgro thought he had got one back for the hosts when he dived spectacularly into the corner, only to come up short via the TMO this time. The desperate tackle of Isaac Lucas was shown to have forced him to put a foot into touch before he grounded.

Argentina were starting to flex their attacking muscles, their pacy and elusive backline seeing a lot more ball as a result of the extra space. But just as they looked like making good on their ascendancy, they were caught with a sucker punch and the Junior Wallabies struck the hammer blow.

Having patiently worked their way inside the 22 on 54 minutes, possession was turned over by Aussie skipper Fraser McReight, who quickly fed Ben Donaldson. The flyhalf saw no-one home in the opposition half, boomed a kick upfield, raced ahead to get there first and grubber in goal, and just about had the legs to reach the ball before the last defender to grab a dramatic and vital score. 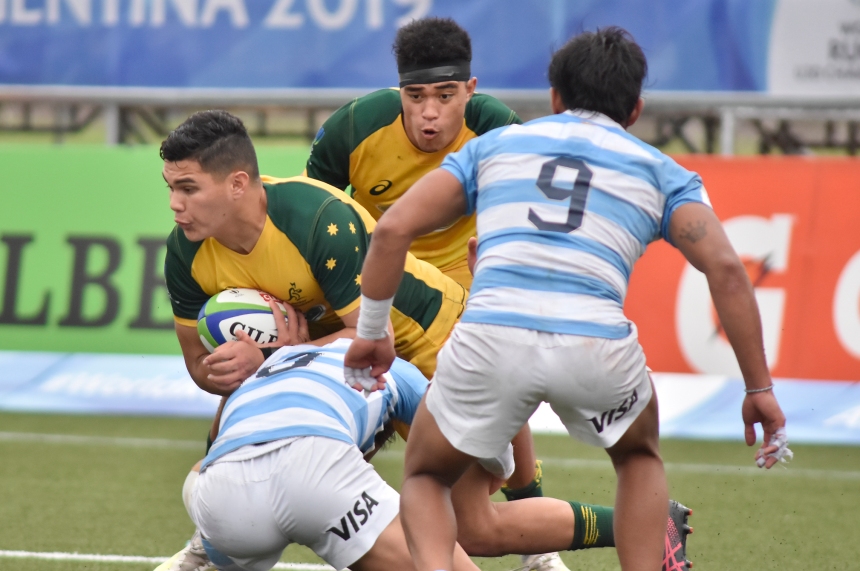 The Pumitas came again, but there was ‘Captain Marvel’ McReight, scrambling back to thwart a dangerous line break. Backrow partner Wilson wasn’t going to be left out in the heroic stakes either, his ball-and-all tackle holding up another blue and white surge, before centre Lolesio got in on the act, stepping out of the line to smash his opposite number and force a knock-on with the overlap begging.

Both sides emptied their benches in the closing quarter, with the hosts desperately trying to get something on the board to kick-start a comeback. But the Junior Wallabies’ defensive effort was outstanding, McReight, Wilson and fellow backrower Will Harris to the fore, while lock Mark Wood was also putting in an industrious shift for the team.

A succession of pivotal turnovers frustrated Argentina – and the parochial home crowd, as the Aussies repeatedly punished high carries in contact with textbook choke tackles. And having weathered the storm – both on and off the pitch – they put the icing on the cake when Donaldson added another 3pts four minutes from time as Argentina went off their feet at the breakdown.

The game ended with a long-range penalty attempt from Mark Nawaqanitawase inside his own half, more to run the clock down than anything else. And when it fell just short and Argentina knocked on as they tried to go the length of the field, that was that.

Celebrations duly ensued in the Aussie contingent, and rightly so. They had kept the 15-man Pumitas scoreless for the entire second half to win 34-13, and put themselves one win away from championship glory. What a fantastic, measured, clinical and gutsy performance from this group of young men.

Standing between them and a unique slice of rugby history are reigning champions France, who outplayed a physical South African side in the other semi-final with a combination of guile, grit and grace. They will take some stopping in the early hours of Sunday morning, but on this form, so will the Junior Wallabies. We wish them well.