It took them a while to truly click, but Australia have come through a testing encounter against an impressive Fijian side to open their 2019 Rugby World Cup campaign with a 39-21 win in Sapporo.

For around 50 minutes it seemed as though the Wallabies were staring down the barrel of a potential upset, trailing 14-12 at half-time and then 21-12 shortly after the restart after a mix up in midfield saw Waisea Nayacalevu run half the field.

But a gradual dominance at set-piece time, with the scrum and lineout maul to the fore, plus some impressive performances off the bench in the last half hour, saw them turn potential disaster into a bonus point win.

A promising start from the Fijians brought the opening score, flooding the breakdown inside the Australian 22 to earn a penalty, and former Southern Districts star Ben Volavola dissecting the uprights. But better was to follow, a poor kick from Nic White punished when Volavola spotted numbers on the right flank, Josua Tuisova swatted aside Reece Hodge and fed Waisea Nayacalevu, who had Peceli Yato on his inside for a run to the corner.

They almost went in again on 12 minutes, a clever lineout play bypassing everyone for Volavola to send Yato crashing through the line, and when the ball was recycled the industrious flyhalf put up a crossfield kick for Semi Radradra to soar above Hodge, only to spill the ball forward under pressure from White with the line begging.

The Wallabies had been sucked into playing a game that was suiting their opponents, continually trying to go wide before treading the time-honoured pathway forwards, and being picked off with a succession of bell-ringing hits that thwarted their progress or forced a knock-on. So it was no surprise when a return to a less aesthetic mode of attack garnered its reward before the end of the first quarter.

A dominant scrum had the Fijians going backwards before Isi Naisarani scooped up to splinter them further with a charge straight through the pack. White was on hand to pick out support runners and found his skipper, Michael Hooper powering his way through several benign tackles and driven over the chalk with a little help from David Pocock and Izack Rodda.

A sloppy Australian lineout put Fiji back on the front-foot after the restart, a huge shot from Levani Botia dislodging the ball from Christian Leali’ifano’s grasp and sending Yato through a gap. The pacy openside carried hard into traffic, and when Naisarani was penalised for going off his feet, Volavola extended the advantage. 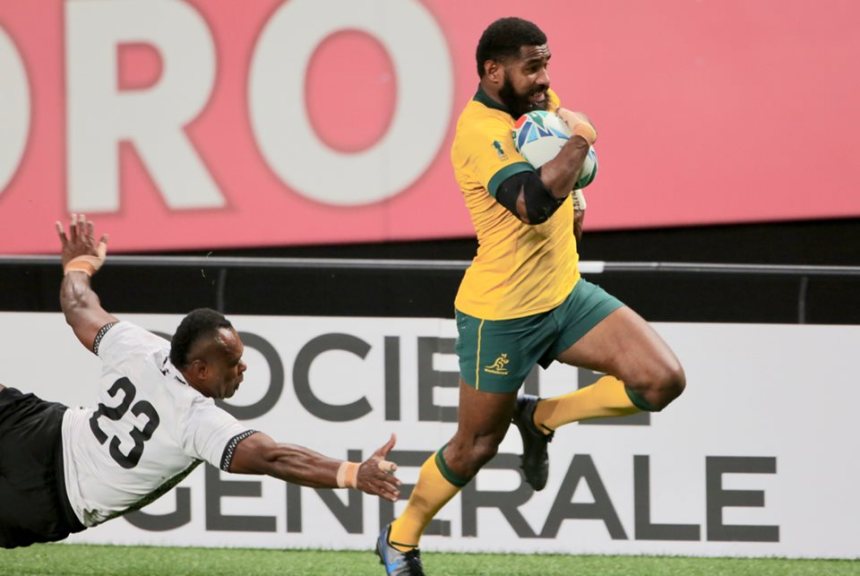 Fiji came again, a short lineout play – not sure it went five metres – sent the irrepressible Yato away down the sideline, only for Hodge to put his body on the line and send the ball into touch. And Australian hearts were then in mouths as Pocock’s admirable intention to play on quickly left Samu Kerevi pinned on his own goal line and outnumbered, Fiji forcing him to ground to earn a five-metre scrum.

However, replays of the previous tackle appeared to indicate that the initial contact was made with a shoulder to Yato’s head as Hodge tried to wrap his arms, despite the Wallaby seemingly coming off worst and flying back several metres from the hit. No action was deemed necessary from the on-field officials or TMO. But a dazed Yato left the field for an HIA and failed to return, meaning this may not be the last we hear of the incident.

Hodge was called upon again when Fiji went left for Nayacalevu to go close, another crucial hit forcing the ball to the floor and the Wallabies scrambling well to clear. But when Tuisova returned a clearing kick from Kerevi with interest, brushing aside James O’Connor with ease this time, and ?? was taken high by Rodda, Volavola made it 14-7 from distance.

A high-shot on Hodge then gave the Aussies a chance to find a riposte before the break, Hooper passing up 3pts for a kick to touch and a lineout drive. Fiji did well to stifle the maul, Leone Nakarawa swimming through the middle to disrupt Tolu Latu’s surge for the line. But when White stepped in to shift the attack to the opposite flank, they had the numbers to go through the hands for Hodge himself to dive for the corner, and get his side back within two at the break. 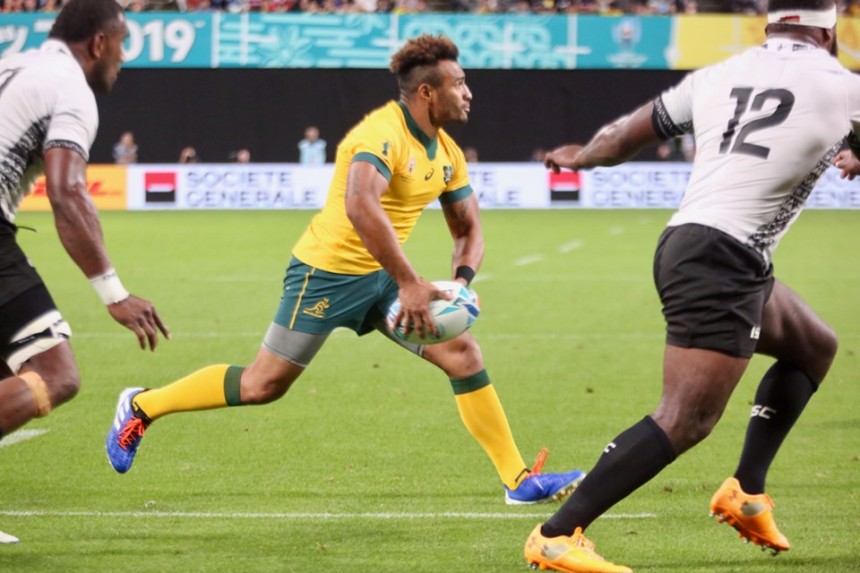 Will Genia made a huge impact off the bench – Photo: AJF Photography

14-12 down – the most points Fiji had ever scored in an opening half against Australia, the Wallabies looked to strike early after the restart, and a penalty gave them a chance to work off good field position a couple of minutes in. But after mauling the lineout several metres and shifting inside off decoy runners to create space, a pass from Kerevi fell behind Leali’ifano and sat up perfectly for Nayacalevu to pluck from the air, and race half the field to gleefully dive under the posts.

Volavola’s conversion made it 21-12, the Fijians punishing every error to build their lead off only 30% possession. But it was a mistake at the breakdown that gifted the Wallabies a way straight back in to the contest, Hodge stepping up in place of the injured Leali’ifano to claim 3pts.

Will Genia joined the fray in place of the out-of-sorts White, and made an immediate mark with a superb touch-finder. Back-to-back penalties from Fiji left the Wallabies in prime position for another driving maul, and after a couple of attempts were illegally thwarted and earned a final warning from referee Ben O’Keefe, it was a case of third time lucky as the pack rumbled as one to power Tolu Latu over.

Hodge couldn’t add the extras from out wide, and as the game entered the final quarter coach Michael Cheika looked to his replacements in the shape of Matt To’omua and Lukhan Salakaia-Lotu to continue the comeback. They were helped by a yellow card shown to Botia for successive team infringements, and Australia took immediate advantage with another lineout maul for Latu to claim a double, and put the green and gold in front for the first time in the match.

Tolu Latu crashes over for a double – Photo: AJF Photography

A revamped Wallaby scrum with James Slipper, Jordan Uelese and Sekope Kepu packing down in the front row, then won a penalty from a dominant shove on halfway to get them back inside the opposition 22. A brilliant steal on the floor from fullback Kini Murimurivalu stemmed one surge, but Australia were firmly in control, and when a barrage of pick and drives interested one-too-many defenders on the line, Genia fired it into the hands of a rampaging Kerevi for the centre to blast his way over in style.

The wheels began to come off for Fiji as they conceded again with Australia in full flow. Neat hands down the line and a terrific offload under pressure from the newly arrived Dane Haylett-Petty, opened the door for Marika Koroibete to escape the last man and stretch his legs down the flank for try number five.

The game ended with Fiji trying to conjure up a consolation score. But a knock-on three minutes after the final siren encapsulated their second half, and the fire they had brought for the opening half hour in particular, had been successfully doused by a Wallaby side that will be all the better for this testing 80 minutes.