A late penalty from Connor Winchester has given Hunter Wildfires a memorable win on the road, coming away from Coogee Oval with a 41-38 triumph over Randwick in what was a hugely entertaining clash between two sides that came out to play.

A tit-for-tat first half saw Randwick cross first before Hunter went back-to-back to lead 14-7, only for the Wicks to put on some razzle dazzle and head to the sheds 24-17 in front. A quickfire try after the restart looked to have put the home side in the box seat, but the Wildfires employed a potent maul to good effect to get back to 38-all with a couple of minutes remaining. And when their hosts were pinged in front of the posts late on, up stepped Winchester to make it seven out of seven off the boot and ensure a rowdy bus journey back to Newcastle.

Coming in off the back of a 20-point win over West Harbour the week before, the Wildfires started with plenty of confidence and enterprise, and it was they who opened the scoring after just four minutes. It was Randwick who had ball in hand before a stray pass was picked off in the air by Rob Puliuvea, who pinned back the ears and went for the corner. A terrific try-saving tackle from Ben Dowling went unrewarded, as skipper Puliuvea fed off the ground for supporting winger Jed Englert to dive home on debut. Connor Winchester added to his 44pt haul for the season with the conversion and the home side were behind early.

They went in search of an immediate riposte but were guilty of pushing the pass a bit when they got within striking distance, some patient phase play required as the visitors line speed choked their space. But when you’ve got the pace and finishing prowess of Christian Yassmin in your arsenal, sometimes the direct route is the most profitable. So it was when the winger received the ball on halfway in the 10th minute and jinked infield and past the reach of one Wildfire, stepped back out from another, and gassed it to the corner for the photo-friendly finish and a fourth try of the season. That being said, Hunter coach Scott Coleman would be justified in asking questions of the defensive effort in trying to stop him.

The Coogee crowd were murmuring their approval as the game continued to be played at pace and with plenty of attacking flair and intent from both sides. Randwick looked to run it from anywhere with offloads to the fore, Hunter happy with ball in hand too but also adopting an astute kicking game through Winchester and halves partner Leon Fukofuka with which to pin the green jerseys ability to gallop. However, when the next score came it was from more pragmatic means, good continuity inside the 22 leaving Wildfires prop Faavae Sila with a mismatch a few metres out, and he didn’t hesitate in swotting aside Jamie Rickward and stretching for the chalk.

That advantage lasted mere minutes as Randwick slipped into gear and exposed the Wildfires out wide once again. Centre Tominiko Maiava was the architect this time, slicing through two defenders and freeing the arms for an offload to Joel Ellis, who had Nick Chan back on his inside for the run home. Scrumhalf Tim Sippel pushed a rare one past the posts and an entertaining opening quarter ended with the visitors in front 14-12.

The Wicks butchered a third shortly after the restart, a lovely step from flyhalf Dowling taking him through a gap with options either side for a run to the posts, only for his pass inside to Maiava to fall just behind and then to the floor to let a relieved Hunter off the hook. Conversely, it took a timely Yassmin tackle to prevent Tom Watson from sending fullback Will Feeney away to the corner on the half hour, after Randwick coughed up cheap possession from their own lineout. 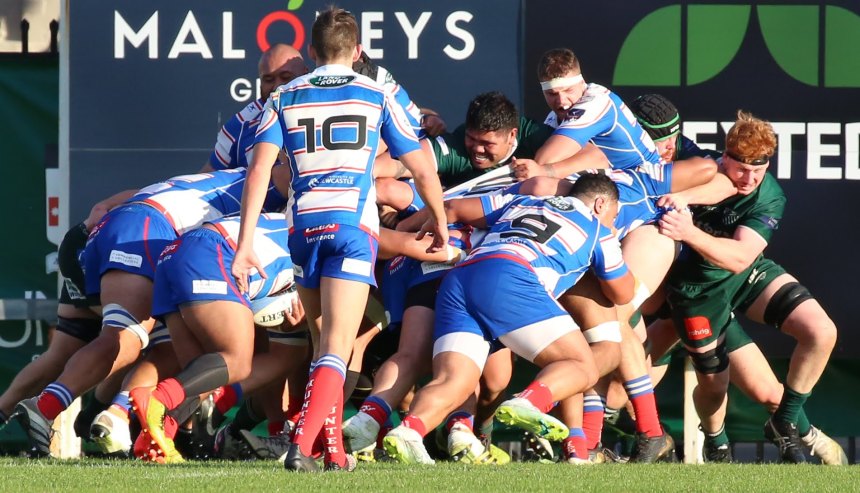 Hunter’s potent maul was a weapon of choice throughout – Photo: Ric McLallen

The thrill-a-minute nature of the game continued when a lovely flat pass from Chan sent the dangerous Maiava away with one to beat, only for his chip over the top to be smothered by the covering Winchester. However, Maiava had been impeded in the process, meaning a yellow card for Englert and handy field position for the hosts. They took full advantage too, the lineout functioning perfectly this time as they went one off the top into the hands of Yassmin, who had too much speed and momentum for the goal line defence to prevent him claiming a double.

After such a positive start the wheels were in danger of well and truly coming off for Hunter when they conceded a fourth directly from the restart. Sippel put up a testing bomb that led to two Wildfires getting in each other’s way, the ball fell kindly into the arms of Henrik Anthony, who fed rampaging lock Alex Hills all the way up the touchline for a popular score.

Sippel’s conversion fell wide, but from some scratchy beginnings the Wicks had forged a ten point lead at 24-14 as half-time approached. However, that was reduced to seven when Winchester popped over a penalty after the bell after the home side strayed offside, and the teams went to the sheds just a score apart after a very entertaining opening stanza.

It didn’t take long for Randwick to put their foot to the floor, concocting a fifth inside the opening 90 seconds after the restart. Tidy work infield from the sniping Dowling and Maiava attracted defenders, but it was a breakout from that man Hills – forgetting the number on his back once again – that did for the Wildfires, the rangy tall timber stepping through the line and offloading to the alert Sippel for a race to the uprights that he never looked like losing.

Hunter needed to score next to stay in the contest, and they went back to basics from their next visit to the red zone, a potent maul driven with gusto but somehow held up short by some desperate Randwick defence. They recycled and maintained the forward onslaught, this time held up over the line as the myrtle greens continued to front up when needed. But having returned to their full complement with the return of Englert to the fray the visitors sustained the pressure, piling on maul after maul before finally getting a justified reward on 50 minutes, with hooker Phil Bradford driven over and Winchester’s boot bringing them back within a score.

Things were truly turned on their head when the Wildfires repeated the trick five minutes later. A penalty for not releasing gave them the chance to go back to touch and get that maul back in action, and after inching their way within range, another barrage of pick and drives ended with skipper Puliuvea grazing the chalk and Winchester levelling the scoreboard at 31-all. Game on.

Connor Winchester’s boot was a point of difference for the Wildfires Photo: Ric McLallen

Having barely got out of their own half for 20 minutes the onus was now on Randwick to produce something to switch momentum, and they did so with aplomb. Dowling raced into yet another gap as the Wildfires parted like the Red Sea, and freed Sippel. The scrumhalf didn’t have the legs to see off the last man, but was aware enough to hold onto the ball and wait for the onrushing Yassmin to take the pass and streak away for his hat-trick.

But the previous status quo soon resumed, Hunter going back up the other end and wisely following the mantra of ‘If it ain’t broke, don’t fix it’, and sticking it up their jumpers once again. A scrum penalty got them knocking on the door, and when flanker Donny Freeman unpredictably peeled off the side of the next maul to dart to within a metre, the big boppers were soon on hand to help hooker Bradford over for his second of the match. Winchester calmly slotted his sixth successful kick to make it 38-all and the game was anybody’s with six to go.

When the Wildfires mixed it up and ran it from their own half to earn a lineout, they had the platform from which to cause further damage. And while they were a touch too far out to maul it to the line, tidy phase play infield eventually saw Randwick pinged for not rolling away, and Winchester made it seven from seven to put the men from Newcastle back in front with time running out.

The Wicks threw the kitchen sink at a late winner, going coast to coast but making precious few metres as the Wildfires ranged out across the field, mindful of giving away any shot at redemption. But when one pass too many caused a knock-on, the last whistle shrilled to signal a memorable victory in Hunter’s recent Shute Shield history. Two years ago they came to Coogee to make their competition debut under their new guise, and went home with their tails between their legs having been pumped by fifty. This result is a clear indication of the progress made since then, and ensured that the road trip back up the M1 was decidedly more jovial.