Question:
All these players have something in common but name the odd man out – Peter Playford; Adam D’Arcy; John Grant; Greg Jeloudev; Sisa Waqa or Harry Bergelin?

Answer:
They’re all backs who have finished as the leading Shute Shield try scorer with 20 tries or more…..except Harry Bergelin. He topped the 2014 try scoring list with 20 tries – from the backrow!

A cursory flick through the history books illustrates just how unique this achievement is.

Having gone back 20 years, we are, perhaps unsurprisingly, yet to find another forward who has matched Bergelin’s feat. The great Tim Davidson bagged an impressive 18 tries from the Uni backrow in 2005, but still finished nine behind the record breaking Peter Playford that year. While former Wallaby Jim Williams crossed the chalk 19 times for Warringah back in 1997, but that wasn’t enough to top the lists that year either.

While we continue to delve through the history of Sydney club rugby to try and find a definitive answer, our bet is that it will prove to be a very rare occurrence indeed. Bergelin himself, remains somewhat perplexed as to how he managed to reach such a tally.

“I’m not going out there to score tries, I’ve just been lucky I suppose,” says the humble 23-year-old. “I can’t take a lot of credit for the tries, they’ve come off the back of a maul or I’ve been the person there for the last pass. Every time I cross the line I’m pretty surprised to be honest.” 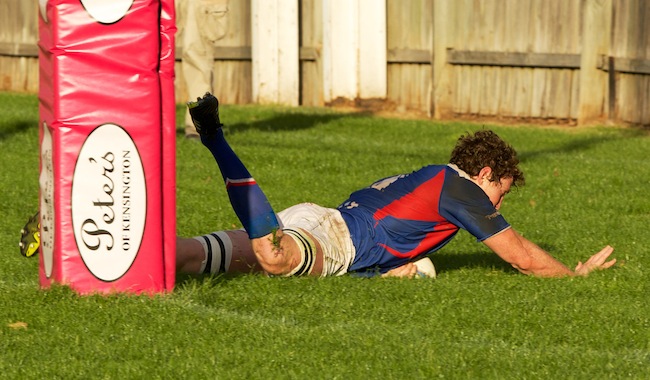 And another! Bergelin slides over against Randwick at Coogee Oval

Very much a local, Bergelin started out with the Manly Roos under 6’s junior side, played “a bit of school footy”, and made it into the Marlins’ colts while he was still at school. Following in the footsteps of late father Bernie, a Marlins legend who played over 200 grade games for the club, and elder brother Anthony, a former Manly club captain, he went straight into grade with 2’s in 2011.

Having played a bit of 1st grade at the start of last year under then-coach Tim Lane, Bergelin found himself back on the fringes when Phil Blake returned to the Marlins to take up the reins mid-season. “I think he thought I was a bit too radical for the way he wanted to play, and he stuck with the big forward pack made up of guys that he knew before,” he offers.

But in 2014, a fresh approach has not only seen Bergelin get the permanent nod, but the Marlins playing a more expansive game than in previous years – and with some success. While their defensive capabilities have been maintained – limiting the opposition to around 17 points per match, it’s at the other end of the field where they’ve markedly improved, scoring an average of just over 43 points a game, and lifting the Minor Premiership in the process. It’s an approach that has suited the dynamic young flanker to the ground.

“Manly are generally renowned for having a good forward pack and we’d be silly to go away from that, but it’s definitely a case of encouraging the backs to play what’s in front of them,” he enthuses. 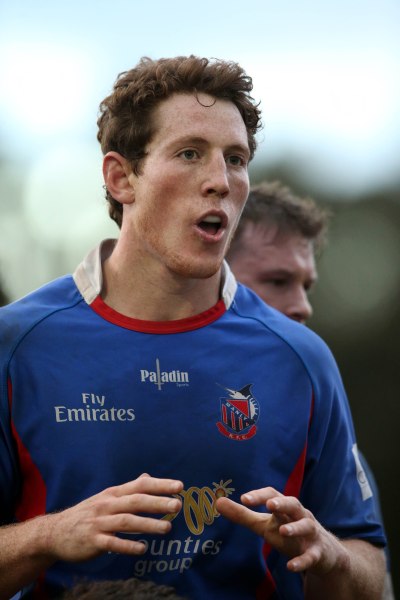 Bulking up another six kilos in the off-season has clearly assisted Bergelin at the breakdown, and an intensive training regime under Blake has also improved his workrate and energy around the park. His ability to be consistently close to the action is a definite factor in his try-scoring feats.

“If you’re not within 5-10 metres of the play at all times, you‘re not playing as a backrower should really, it’s one of the basics of being there,” he observes. “There was one try against Parramatta that was from about 40 metres out, and one against West Harbour last week where I ran about 30 metres and beat the fullback. But a lot of them have simply been a case of ‘here’s the ball, put it down’.”

However, while his achievement is obviously noteworthy, it is one that Bergelin feels has also had its negative impact. There was a time mid-season where his name on the scoresheet was becoming such a given, that it offered up some ammunition for the opposition to question his qualities elsewhere around the paddock. In some ways, his unexpected success actually became a burden.

“I just wanted to get away from it and not think about it because there was kind of an expectation that I was going to score every week, and I had a few smart comments from the opposition,” he admits. “Scoring tries is not something I set out to do every time I go out onto the field, but I’ll gladly take them. I’d like to think there’s a bit more to my game than that though.”

And there most certainly is. To pigeonhole him as merely a threat to the line would be to ignore a skill set and physical contribution that is improving year upon year.

“He does a job in the scrum, does a job at the lineout, defends well, and runs the ball well. He does everything,” says his captain at the Marlins, Ed Gower. “He’s a hard worker who’s fit and strong and has great general ball running ability. He’s just one of those all round players.

“He’s got a really good understanding of the game, he knows what’s happening and where to put himself,” Gower continues. “And one of the things he does well is that he knows the player that he’s around. So a few times he’ll get offloads, or he knows when he needs to be in the ruck and when he doesn’t, and if he doesn’t need to be in there, he gets himself in a good position to play rugby.”

His coach Phil Blake is a notoriously hard marker, but is only too pleased with the improvements he’s seen in his talented no.6. “He’s finally starting to understand the game and his role within it,” explains Blake. “Harry’s biggest problem was that his reading and understanding of the game regarding when to play tight or when to play out on the edges, needed to get better. He’s got the skills of a 10 but we don’t want him playing like one!

“We’ve got him to play tighter this year, and he’s now playing a lot more physically and getting a really good understanding of when to do it, and he plays so much better when he’s got that flexibility in his game,” Blake continues. “He’s benefitted from it, we as a team are benefitting from it, and I’m sure – if not already – he would be on the radar of teams at the next level. He’d have to be. He’s stealing lineouts, stealing ball, scoring tries and making tackles. He’s really developed to where his game now, at 23-years-old, is on the threshold of picking up a contract somewhere.”

Gower agrees. “I don’t see why not. He’s just as good as plenty of other guys that are up there playing it at the moment,” he says. “He’s been building every year, he’s still young and we’re excited to see what he’s going to do in the future.”

That future should contain a place in a larger shop window with the North Harbour Rays as the inaugural NRC competition kicks-off in less than a month. But first and foremost, it’s about helping Manly to their first Premiership since 1997. While the season has gone swimmingly so far, the boys from the Village Green are not averse to falling at the final hurdle in recent years.

“If you’re playing 1st grade footy you’d be pretty stupid not to have aspirations to play in the NRC,” he admits. “But the attitude with all the guys this year when it’s been brought up, is that we’re here to do a job for Manly first and then, if you get picked beyond that, that’s great. But we’re not looking too far into the future.

“As a team it’s pretty simple. It’s about winning the competition, and we’ve had that target since pre-season. We’ve always been there or thereabouts but we’re never the ones to push at the end of the year, and we don’t want to fall short in the semi-finals again.”

Given their recent record in knock-out footy, the Marlins may well be a tad wary as they prepare to face Randwick on Saturday. But Bergelin feels that the side have done the preparation needed to ensure history doesn’t repeat itself in 2014.

“We had such a great start to the season that about eight games in, ‘Blakey’ said we’d already pretty much made the finals. So we could relax a bit, play some footy, and concentrate on getting the little things right that were going to be needed when we reached this part of the season,” he reveals.

“We had a couple of slip-ups against Warringah and Easts, but last week against West Harbour I think we were rewarded for getting those little things right, so I think we’re in good shape. Whoever gets into the finals these days have to be a pretty good team, and Randwick as a club – if not this particular side – have been there before, and they know what they’re doing. It’s a one-off game now but I think we’re ready, and this is the best shot this club has had at winning the comp for a while.”