Scoring tries off a lineout maul is not exactly a recent invention, it has been a significant weapon of choice for many rugby teams down the years. But never has it seemingly borne so much fruit as the stats suggest it has in the last few years, with hookers in particular beginning to rival wingers as their side’s most prolific outlets.

On home soil the upward trend started in earnest down at the Brumbies, with flanker David Pocock the benefactor for many years until Folau Fainga’a assumed the mantle of ‘man at the back’ in the no.2 jersey, crossing 12 times in the 2019 Super Rugby competition. He also finished second on the list in last year’s truncated Super Rugby AU, behind the Queensland Reds’ prolific rake Alex Mafi. And things were no different on the other side of the ditch, where despite the annual attacking prowess so devastatingly illustrated by the all-conquering Crusaders, it was hooker Codie Taylor that found the chalk more than anyone else.

Asafo Aumua (Hurricanes) and Ash Dixon (Highlanders) are high up on the charts after three rounds of Super Rugby Trans-Tasman, and the status quo remains when we head to Europe. Things aren’t so obvious in France, where Pierre Bourgarit (La Rochelle) is the only hooker in the top 10 try-scorers for this season’s Top 14. But either side of the Covid-19-enforced competition break, England’s Gallagher Premiership went from just under two hooker/penalty tries per week (1.75) to seven – a four-fold increase.

So it is perhaps no surprise to see a few fully paid-up members of the front-rower’s union flying high in this season’s Charter Hall Shute Shield try-scoring list as well, with Southern Districts and Waratahs hooker Andrew Tuala (7 tries), Northern Suburbs’ James Margan (5), Eastwood’s Max Stewart (4) and Randwick’s Valance Yates (3) all dotting down with regularity.

But it is the number of tries scored by the player blazing a trail at the top – Sydney University’s Declan Moore – that is raising a few eyebrows. With 12 in just seven games already, Moore is on track to reach an incredible 30 by the end of the regular season – fitness and selection permitting. And while that may seem fanciful at best, the current dominance of the Students pack at set-piece time, and the levels of discipline, organisation and execution that they are displaying when they have a lineout within range, suggest that it may not be as crazy a possibility as it sounds.

Speaking ahead of his side’s round seven clash with Uni a fortnight ago, Warringah head coach Michael Ruthven was all too aware of the rolling maul danger that was coming their way, and how the Rats had spent all week preparing for the inevitable. But it’s one thing to prepare for it and another to actually stop it, and although the visitors did a better job than most in 2021, Moore still grabbed his customary score from a metre, with replacement prop Charlie Hancock also on the end of another textbook drive late in the game. 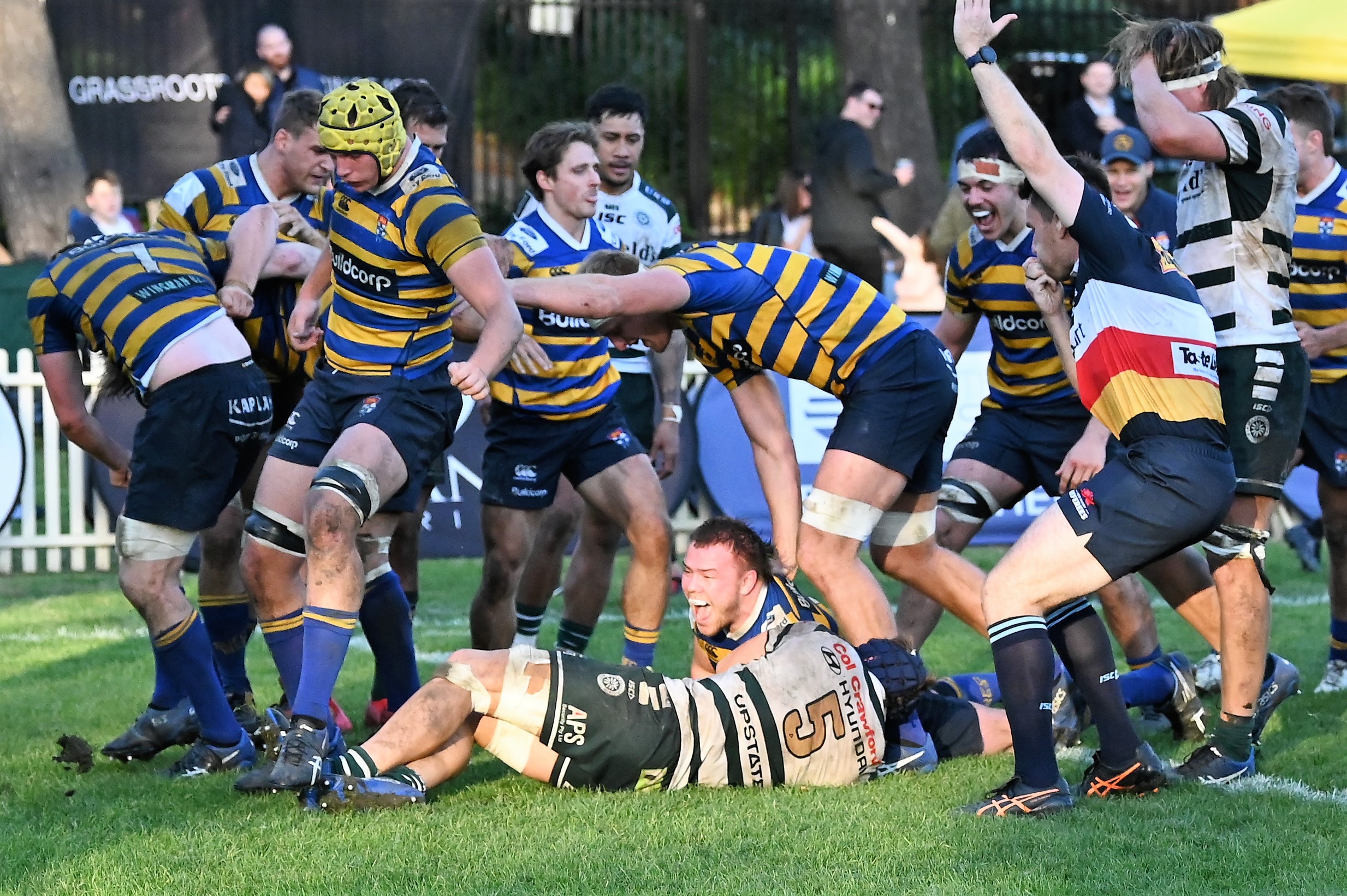 And another. Moore crosses for try number 12 against Warringah – Photo: Mum’s Rugby Snaps

That he only scored one was maybe the eye-opener, with multiple tries achieved so far against Hunter Wildfires (2), West Harbour (3), Eastwood (2), Penrith (2) and Manly (2). In fact, only Easts in round seven have managed to hold him out. But as the 24-year-old humbly explained to Behind the Ruck after that Warringah match, he’s purely benefitting from the exploits of others.

“It’s never really the goal to go out and score tries, it’s just off the hard work from the rest of the team,” he said. “But it’s nice when they come. I’m just happy the boys put another good performance in and we can share the love around a bit.”

Given the aforementioned numbers, Moore has the chance to become the first forward to top the Shute Shield try-scoring charts since Manly flanker Harry Bergelin had a ridiculously prolific season back in 2014, finding the line 20 times. Bizarrely, he may even have the Sydney club rugby season record of 29 – achieved by fellow Student Peter Playford in 2005’s Tooheys New Cup – within reach. But again, Moore prefers to focus on the bigger picture rather than any potential individual plaudits.

“It’d be nice, but it’s not something I’ve really set my sights on,” he offers. “It’s just taking each game week-to-week and focusing on the competition and making sure the boys are firing and ready to go. We had a really long pre-season and we’ve got a really good group of guys that have been together for a few years now, and who are all willing to work hard for each other. We drive the standards and expect the best, and if I’m lucky enough to be on the receiving end of some tries, that’s great.”

One man that was on hand to witness the avalanche of rolling maul tries in England last season – none more so than from dual national and European champions Exeter Chiefs – was Sydney University head coach Robert Taylor. He spent six months as a part of the Leicester Tigers coaching ticket under the tutelage of Eddie Jones’ former England lineout guru Steve Borthwick. And given the success of Moore and the Uni pack since his return to club land, it’s probably not much of a reach to suggest that that experience gained on the training paddock every day, coupled with seeing what was working for the dominant Chiefs week-in, week-out, can only have fed the IP Taylor has brought back to Camperdown.

Talking after the win over Warringah, the coach himself was happy to lavish praise on former Premiership winning-captain Rohan O’Regan for his role in Uni’s lineout success, as he helps out on the coaching front whilst making his way back from shoulder surgery. But as Moore attests, there’s no doubt the Students are reaping the benefits of Taylor’s working sabbatical.

“We’ve been really fortunate to get Rob back from the UK,” he agreed. “He’s brought back a wealth of knowledge and experience around the game, and a lot of stuff that we haven’t focused on much before. Having that extra knowledge around set-piece and the kick cycle has been excellent, and we’re just putting all that hard work into practice and getting some good results from it.”

In fairness, Moore’s tries haven’t all come from a metre out! – Photo: AJF Photography

It was Taylor that referenced Moore as one-to-watch in 2021 in his pre-season preview, off the back of a rewarding, albeit frustrating, first taste of the professional scene down in Melbourne last year. And while the lessons learned as part of a Super Rugby squad are clearly paying dividends, just getting to pull on the shirt every weekend and play some regular footy is helping this particular rake’s progress.

“In going from a semi-professional competition like the Shute Shield to being a full-time pro I learnt a lot, and I’m grateful for the opportunity that the Rebels gave me,” Moore reflected. “I think I only played five games of Super Rugby AU as twenty-fourth man, so I would have liked to get a little bit more out of my time down there. But with what happened with Covid in 2020 it was a bit hard. However, Melbourne was a great experience and I think it’s paying off now.

“Having the opportunity to start in a first grade jersey regularly is helping me play pretty good footy at the moment. There’s been a great pedigree of hookers at Uni in recent years, and I’ve been stuck behind guys like Tolu Latu, Folau Faingaa and Tom Horton, so I’m just really relishing the opportunity to get a good shot at it now. Every week is a chance to put my hard work and the skills I’ve learned into action, and I’m just loving being back on the park.”

Naturally, the aspiration to get another opportunity at the next level burns brightly for Moore. And while his required skill-set encompasses the accuracy of his darts at lineout time, his scrum proficiency, defence and much more than finding the line, if his try-scoring exploits alone maintain their current pace, his will be a hard case to ignore by season’s end. But following a 2020 season which fell well below Uni’s high standards, with 1st Grade out of the finals in week one and a failure to land the Club Championship for the first time in 16 years, all eyes are on restoring the club to the pinnacle of Sydney club rugby.

“You’d be kidding yourself not to aspire to be a full-time professional, that’s what everyone’s doing in the Shute Shield,” he observed. “And if I can keep putting good performances in, hopefully someone will come knocking. But I just want to let my rugby do the talking. At the end of the day we’re a club and we’re all about working hard for each other, and the Club Championship is the most important thing to us. That’s always the end goal, anything else that comes from that is a win.”

With Uni claiming seven victories from seven matches at an average of 49.7pts per game, you get the feeling he will have plenty more opportunities to state his case as the season progresses…