Resurgent Rebels on top after Sunwolves are tamed

Ok. Hands up all those who thought the Rebels would be sitting pretty on top of the Australian conference with two bonus point wins to start their 2018 season? And second on the overall ladder with the best points differential in the competition?

But that’s exactly where the revamped Melbourne-based side find themselves, after they backed up their promising win over the Reds last week with a 37-17 victory over a gallant Sunwolves outfit in Tokyo yesterday.

The visitors dominated the early stages and should have been further than 10 points ahead before the hosts found some rhythm late in the half to drew level at oranges. But a plethora of injuries upset the Sunwolves cohesion and the Rebels pounced, putting together 27 points after the break to record the first back-to-back wins to start a season in the club’s eight year history.

It was a scrappy opening 10 minutes with neither side able to make many inroads, and resorting to an aerial barrage in the hope of an error, while the Sunwolves’ early struggles at the lineout would be a recurrent handbrake for them across the 80 minutes.

But when Jack Maddocks sent a long pass wide for Sefanaia Naivalu to stretch his legs and race over halfway, it was the alert 21-year-old utility back who was off the Wallaby winger’s shoulder to take the return pass and race to the corner for the opener.

Another overthrow at the lineout from Shota Horie was then punished in clinical fashion by a Rebels side warming to their task. Quick hands had them in prime position on the right flank, but when Will Genia switched the point of attack to the left, there was some equally adept handling on display as Lopeti Timani, Jack Debreczeni, Adam Coleman and finally Maddocks, all helped it along the line for the rampaging Amanaki Mafi to stride home, on what was a familiar venue for the former Top League star.

It was the sort of score that would have had Wallaby skills coach Mick Byrne purring with satisfaction.

The visitor’s almost had a third shortly after the restart, when a rare knock-on from Michael Leitch gave Genia the chance to jab a probing kick into the wide open space in behind. Fullback Robbie Robinson just about got there before the onrushing Maddocks, but his speculative throw back across his own posts was almost intercepted for a simple five-pointer by Tom English, only for early replacement Ryugi Noguchi to pluck the ball from his grasp, spin away and find a grateful touch. 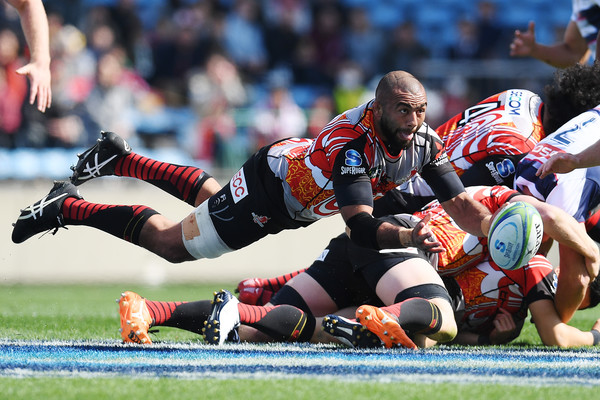 The Sunwolves were struggling to get any ball, and when they did, they either threw it away at the set-piece, kicked it away in open field, or spilt it in contact. But their biggest headache as the first quarter came to a close was fit and able bodies, as winger Akihito Yamada – who came off significantly worse from an accidental head clash with Naivalu – became the third starting backline player to leave the field. As a result, reserve backrower Yoshitaka Tokunaga joined the fray in an unfamiliar back three role, which wasn’t about to help their defensive cohesion under pressure.

Despite the setbacks, they got on the board in the 25th minute, Ryoto Nakamura slotting three points after his side finally got some traction in the Rebels red zone. And after boldly ramping up the pace and intensity for the next 10 minutes, they got themselves level when Dane Haylett-Petty pushed a pass wide for Maddocks that would have given him another run in, and Will Tupou cashed in with an intercept and a run to the posts.

No doubt scratching their heads at the break as to exactly how they came into the sheds level-pegging, the Rebels wasted no time after the restart with Debreczeni edging them in front with a penalty. And they put their foot firmly to the floor shortly after off a scrum play, the ubiquitous Genia again the catalyst as he drew the defence and fired a bullet pass out wide for Tom English to put the lurking Naivalu away for his third of an already productive season.

By this time, the Sunwolves had been forced to use four of their allotted replacements as Sam Wykes was helped from the battlefield, and their increasingly fractured state was punished on 48 minutes by another set-piece play from the visitors. Mafi scooped up from the back of a scrum to feed Genia, who passed in behind two decoy runners for Reece Hodge to put Debreczeni through the line, and his wide pass had Maddocks in space for his second of the afternoon. Shaun Berne, take a bow.

With Debreczeni one from four off the boot, cannon-shot Hodge stepped up to add the extras and open up a 15 point lead with half an hour still to play. But the suddenly rampant Rebels didn’t let up, another break upfield shifted effortlessly from east to west for Haylett-Petty to put Maddocks over for his – and the Rebels – first Super Rugby hat-trick. 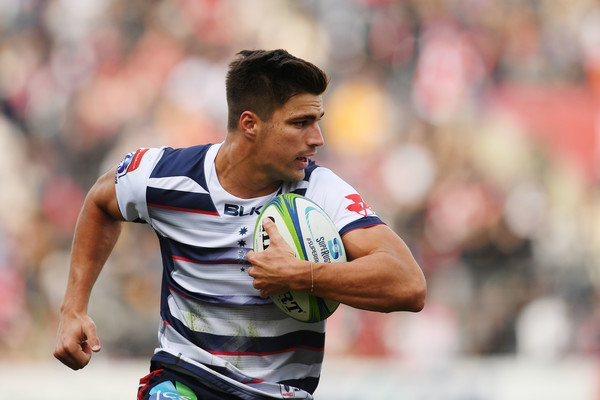 It should have been truly put to bed just before the hour. With the Rebels firmly on the front-foot after a lineout drive, Genia made his first error of a stellar start to the season when his looping pass for three unmarked team mates was picked off and taken 80 metres by Noguchi, before the pace of Maddocks saved the day.

It’s a sign of how strong this new-look Rebels squad is that Billy Meakes – one of the Force’s best in 2017 – can’t get a start yet. But it was his flying tackle shortly after coming off the bench for Naivalu, that thwarted a rare surge from the Sunwolves through bustling centre Nakamura.

However, the home side continued to attack, with no little amount of risk at times. But they, and the appreciative crowd at Prince Chichibu Memorial Stadium, got some reward for perseverance and ticker with a try three minutes from time, Ed Quirk diving over from a metre off a neat inside pass from Fumiaka Tanaka.

But the last word deservedly went to the visitors. Quirk quickly went from hero to zero with a yellow card for a deliberate knockdown after the siren, and with two Rebels waiting to pounce outside the unfortunate former Reds flanker, referee Egon Seconds awarded a penalty try for good measure.

So far, so good for Dave Wessels and co. Next up, the Brumbies.