West Harbour returned to the winner’s circle in the Intrust Super Shute Shield in some style last weekend, with a thumping 30-12 win over Randwick at Concord Oval.

The margin of victory wasn’t flattering either, the Pirates leaving more than a few tries out there against a Wicks side that was unusually flat, and struggled to contain their opponent’s physicality.

It was 22-0 at the break, and the visitor’s only really clicked into any sustained cohesion in the closing quarter, when Wests went down to 14 men with a second yellow card for Graeme Kolomalu. But in a season where every round seems to see a revolving door of winners – Randwick losing to a side that lost to Eastern Suburbs, the team they had beaten the week before – this defeat shouldn’t pump up the victor’s tyres too much, nor let the air out of the loser’s either.

Of course, any game plan you put together for an opponent during the week isn’t exactly helped by the concession of a try in the opening minute. But that’s exactly what happened to the Wicks, when Andrew Kellaway’s clearance to touch after receiving the kick-off resulted in a sneaky short lineout, and four passes from one flank to the other gave Taqele Naiyaravoro a run down the line, and an offload for Kolomalu to dive home.

Naiyaravoro was almost away again a few minutes later, a loose pass from the Wicks inside the Pirates’ 22 plucked from the air, only for the big Waratahs winger to knock-on as he focused on the open field in front of him. The ball fell back into Randwick hands, only for a grubber in behind from flyhalf Bryan Croke to have too much legs.

From their next incursion Wests drove a lineout maul some 20 metres into the red zone, and with defenders attracted to the short side, a crossfield kick looked to be the play with numbers out wide. But Naiyaravoro was hit on the crash-ball instead, only this time Randwick had the bodies to crowd him out and force a knock-on.

However, it proved to be a brief respite for the visitor’s as another lineout on 11 minutes was the catalyst for another five-pointer for the home side. Dave Lolohea was getting through plenty of work in the loose, and it was his carry that initially bent the myrtle green line, before a powerful surge from captain Kelly Meafua had them within a few metres.

Quick recycle ball from Deon Spice had halves partner Sam Malcolm on the front foot, and when Wicks centre Devan Stoltz came rushing out of the line, Malcolm the gap he was seeking to put Kodie Drury-Hawkins away to the chalk.

Malcolm’s conversion left the Galloping Greens 12-0 down without having fired a shot, and their attempts to get a foothold in the match were meeting stiff resistance at every turn, with Meafua, Lolohea, Albert Tuisue, Nigel Vaifale and Enoki Muliufi, seemingly tag-teaming each other for the next ferocious hit.

The Wicks got half a chance on 22 minutes, a lovely pop pass from Ben Starkey sending centre-partner Stoltz haring out of his own 22 and through the Wests line, only for his offload to the supporting Kellaway to be spilt with no-one home – the flame-haired Waratah seemingly with one eye on the scrambling Malcolm as he tried to gather.

But as the game drew towards the half hour mark the Wicks were effectively hanging on, with Wests enjoying the spoils in both possession and territory. And yet, you still wondered if the escalating number of handling errors and sloppy execution in the red zone would come back to haunt them.

Impressive work from winger Jack Sullivan gave them the chance to make amends, as he chased a long kick downfield from Spice to wrap up Wicks fullback Lachie Anderson and drag him into touch just 10 metres out.

When the resulting throw from hooker Andrew Tuala landed in the hands of Randwick no.8 Sam Croke, it appeared to be another case of profligacy from the home side. But a terrific clean out from Lolohea forced a knock-on, and the advantage was back with the Pirates at the scrum. And after Meafua peeled off and charged within a couple of metres, there was Tuala on hand to make up for his indiscretion and drive over. 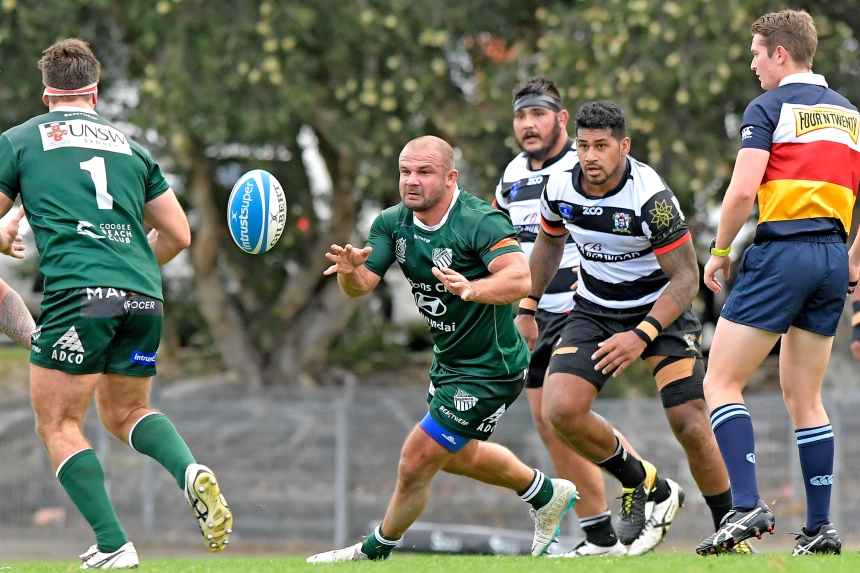 The visitor’s tried to raise themselves from their torpor with their own forward onslaught from a lineout, former Wallaby Adam Freier very much to the fore as he tried to set a ‘follow me’ template for his young proteges. But almost every time they took it into a battle on the floor, it was the white and black striped jerseys that were coming up with the pill.

And on the stroke of half-time they landed another blow. The industrious Lolohea and lock Paula Kaho combined to pin Croke on the floor, and when referee ?? had seen enough to blow for the penalty, Malcolm calmly stepped up and slotted a beauty from the Wicks’ 10 metre line, to take his side into the sheds with a very healthy-looking 22-0 lead.

Things were already looking up for Randwick as they started the second half, with former Waratah, Melbourne Rebel and Ken Catchpole Medal winner Dave Horwitz joining the fray in the no.10 position. And the service to his backline was immediately crisper, and his communication of greater purpose, than had been on show in the previous stanza.

But after 10 minutes of trying to find a way back into the game, something tangible to build from, they were still empty-handed. All too often, there was too much East-West about their approach play, and simply not enough North.

They got a lifeline on 51 minutes when Kolomalu was sent to the bin for a high shot on Anderson. But their first assault with the man advantage was ended prematurely when Horwitz grubbered dead in goal and beyond the chasing Christian Yassmin, when hands was possibly the better option. Patience is a virtue.

That missed opportunity would have stung all the more when the Wicks were then guilty of piggy-backing their hosts upfield with a couple of needless penalties. And after the combative forwards had breached the defences with a succession of damaging pick and go’s to force their own indiscretion, the trusty boot of Malcolm inflicted more pain to make it 25-0. 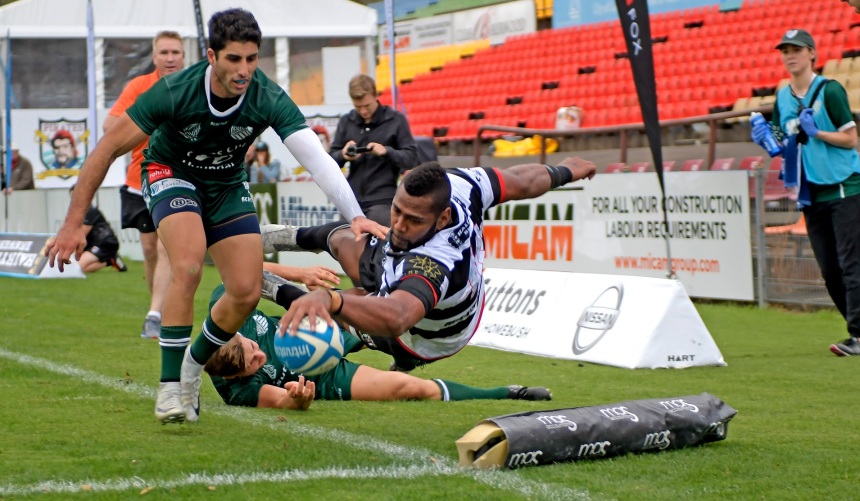 It was soon 30, and while it took a while coming, the try for Naiyaravoro that most people in the Concord Oval crowd wanted to see was well worth the wait.

The athletic Tuisue plucked the restart from the sky and charged back over halfway, carrying several unfortunate Wicks along with him. From there, the Pirates concocted a disciplined, patient and cohesive 18 phases that exhibited much of the progress they have made as a team over the last year, and when they finally worked the space out wide, there was ‘Big T’ on cue to palm off Kellaway, power past Horwitz, and dive spectacularly for the corner with one outstretched hand.

With 20 minutes left on the clock Randwick were staring down an embarrassing reversal, a potential scenario that wasn’t dispelled by Max Page’s subsequent yellow card for slowing down the ball. But that was a ledger that was evened and then some shortly after, when a reckless, rather than malicious lifting tackle from Kolomalu, was punished by a second yellow, and his permanent departure.

The passing from Randwick had left a lot to be desired across the match – I lost count of how many fell behind their man and to the floor. But they finally produced something of note when Horwitz fed Kellaway, and he put replacement Alex Hills over in the corner

The tryscorer backed up that effort with a bell-ringing hit on Drury-Hawkins that dislodged the ball, and when it was sent infield, fellow recent arrival Samuel Connor decide to loosen the shackles. Racing through a fractured line, his sudden injection of pace took him 40 metres, before a clever kick to the in-goal was just about reached first by the pacy Yassmin ahead of Naiyaravoro.

Andrew Kellaway added the extras, and respectability, if not the likelihood of a seismic comeback, was restored to the scoreboard. But it was very much a case of too little, too late. And when a jinking run and measured kick to the corner from Horwitz in the final minute, couldn’t be scooped up by Yassmin with the line begging, it was time for one of those days for the Galloping Greens to come to an end.

This is a text widget. The Text Widget allows you to add text or HTML to your sidebar. You can use a text widget to display text, links, images, HTML, or a combination of these. Edit them in the Widget section of the Customizer.
Loading Comments...
Comment
×
<span>%d</span> bloggers like this: