Posted on February 2, 2019 by Paul Cook Leave a comment

Two wins from three was enough to leave the Australian Women’s Sevens side on top of their pool as day one of the Sydney 7s got underway at Spotless Stadium yesterday.

Victories over Spain and China put the defending champions firmly in the box seat, before they suffered a loss late in the day to the USA in difficult conditions. But they’d already done enough to book a Cup Quarter-Final clash with France later today, with day two also seeing the start of the Men’s competition.

“We started the day well and we have put ourselves in a position that we’re going be playing tomorrow, and we know that day two is where the action happens,” said head coach John Manenti.

“Obviously you want to win every game of footy that you play but there’s always good lessons when you don’t win. Importantly at this stage, the next game we play is make-or-break so we have to really aim up there.” 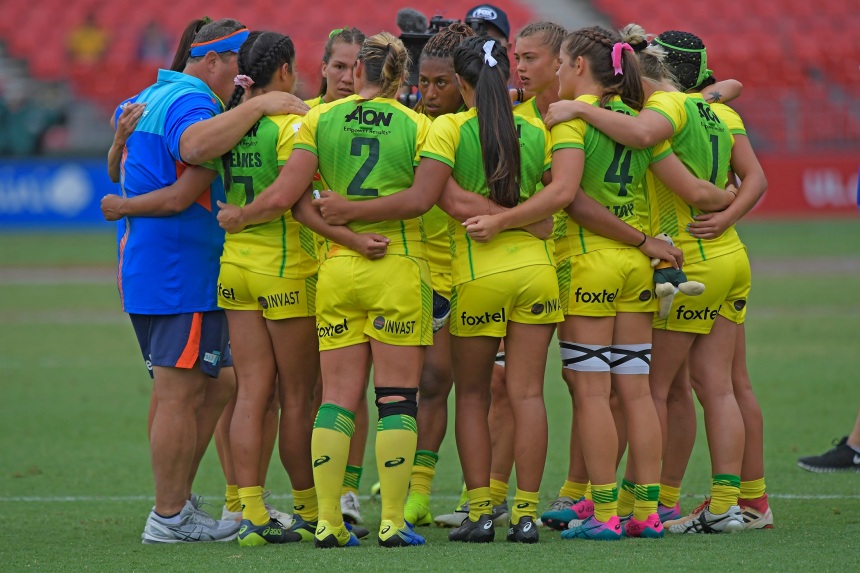 Spain came out intent on getting Australia’s title defence off to the worst possible start, an aggressive opening half limiting the opportunities for their hosts to click into gear. Scoreless at the break, the half-time huddle clearly did the trick as Ellia Green broke the deadlock with a searing 50-metre run down the flank.

They were in again soon after, Emma Sykes touching down to break the Spanish resistance, before try-machine Evania Pelite made it a comfortable start in the end with her first of the weekend to leave a 19-0 scoreline.

It was the impressive Pelite who set the ball rolling against China in game two, running clear from her own half to find the line in the opening minute, before a quick tap and line break from Alicia Quirk put the Aussies firmly in control.

Sharni Williams got in on the act before the break, Pelite the architect this time for her skipper to go under the posts and make it 17-0 at the break, with China struggling to gain a foothold in the match.

And it was all over after 10 minutes, Ellia Green scorching a path down the left wing to grab her second of the day for 24-0. China bagged a late consolation score on full-time through Yaoyao Gu, but two wins from two, and the USA suffering a surprise loss to Spain, was enough to guarantee the home side their place in the knockout phases.

Evania Pelite crossed the chalk for the Aussies in all three matches – Photo: J.B Photography

Having done the groundwork to ensure a place in the last eight, the Aussies went in search of the icing on the cake with victory over a dangerous USA side in their final hit-out of the day. But with Sydney’s heatwave having given way to overcast conditions, some blessed rain came at just the wrong time for two sides keen to throw the ball around.

It was the visitor’s who settled first. No doubt stung by the loss to Spain they came out with all guns blazing, and some concerted pressure paid dividends when Jordan Gray broke through the Australian line to open their account.

It was 14-0 two minutes later, a poor kick receipt from the Aussies punished when Kristi Kirshe pounced to cross the chalk. And things didn’t get any better for the hosts when speedster Naya Tapper ran home a third on the stroke of half-time.

Australia rallied after the break, some smarter footy in the conditions getting them into better field position. But it took a full five minutes to find a chink in the American rearguard, Evania Pelite maintaining her fine form with try number three of the day under the posts.

Buoyed by the breakthrough, the hosts went in search of more, and the returning Emma Tonegato made it a one-score game when she crossed on the buzzer. But time had run out, and despite a positive day overall, the 19-12 defeat left the defending champions with a bit to think about overnight as their quest for back-to-back titles enters the business end of the competition.