After several months of frustrating delay in the wake of the admittedly far bigger picture of Covid-19, the Shute Shield made a welcome return at the weekend with a new-look Southern Districts downing Eastwood 34-19 at Forshaw Park. Incoming head coach Todd Louden had promised the Rebels faithful that they would see a fit and feisty outfit donning the candy stripes in 2020. And his fledgling side were pretty much as good as his word, fronting up physically and coming home with a wet sail to run out four tries-to three victors over a Woodies team that promised in patches but ultimately, had too little ball and made too many errors to hold off their eager hosts.

It took just a couple of minutes for the home side to forge a points-scoring opportunity, a dominant shove from the opening scrum winning a penalty, only for the normally reliable boot of Christian Kagiassis to push his effort wide of the uprights from just outside the 22.

2019 Shute Shield Rookie of the Year Michael Icely then had the visitor’s firmly on the front foot with ample evidence of his burgeoning potential, taking a neat offload from prop Jed Gillespie to tear a path past several Rebels up the sideline and feed back inside before Souths slowed the ball down illegally.

The ensuing penalty was kicked to touch for a potent lineout drive, which ended just a couple of metres short. But when the ball was recycled for Tane Edmed out wide, the flyhalf was caught in two minds and Apaola Tea Lama jammed in superbly to force the ball into touch and keep the home line intact.

Momentum stayed with the Woods, and it took some starchy defence from the well-drilled Rebels to hold out a barrage of ball carries. The physicality of the early stages was a level above that normally found in the opening round of a season, as the pent-up aggression forged from isolation, lockdown and a three-month absence of footy, was unleashed with gusto.

One particular clash, as bulwarking Eastwood centre Enoki Muliufi hit up a crash ball straight into the no.10 channel of Souths debutant Liam Moseley, would have been heard on the other side of Tom Ugly’s Bridge, such was the thunderclap of flesh and bone on impact.

Despite their best efforts, it was perhaps no surprise given the possession and territory stakes that the Woodies finally broke through in the 13th minute. A probing grubber in-behind from fullback Harry Wilson was backed up by an eager kick-chase that saw Souths pinned on their own goal line, and a rushed exit kick from Moseley charged down by a rampaging Ed Craig.

The ball fell into the arms of Tom Alexander – last year’s 4th Grade captain enjoying a return to top grade after a hiatus of several years – and three passes later, the jinking feet of winger Lachlan Shelley saw him step inside a couple of home jerseys to finish with a textbook swan dive for the cameras.

Edmed slotted the extras, but Eastwood’s joy was tempered by the injury-enforced departure of lock Charles Granger, adding to the shortage of genuine second-rower’s at coach Ben Batger’s disposal – a scenario that had informed Alexander’s surprise recall.

Another scrum penalty in favour of the Rebels pack got them back at the right end of the field at the end of the first quarter, and they took full advantage with the kind of well-worked first-phase try that is as rare as hen’s teeth these days. Throwing to the tail, a swift delivery from skipper Marcus Carbone allowed halfback Sam Harris to fire infield for a decoy runner to bring up the Eastwood midfield, and one pop pass later and Harry McLennan was bursting through the gap to gleefully race home and help level the scores.

Tragically, that was to be Carbone’s last significant impact on the game. Just a couple of minutes later, and in the act of executing one of his trademark surges into traffic before offloading in the tackle, the left knee that had ruled him out for the majority of last season, and that he had worked so hard to rebuild for the chance to proudly lead his boys around the park, gave away once again. We love this sport, and the physical nature of it is one of its hallmarks, but geez it can be a cruel bastard sometimes. Best wishes Boner.

Whether it was the sight of their forlorn talisman leaving the field of battle that inspired them, it was the Rebels firmly with their tails up now, and they were ahead before the half hour. Prop James Wayland had already enjoyed several kamikaze bursts at the Eastwood line to that point, but when he barrelled his way into a melee again and the Woodies forgot all about their pillar defence at the ensuing ruck, the alert loosehead scooped the pill off the floor and emerged untethered to run in a popular score that left several visitor’s scratching their heads.

They went in search of a riposte before the break, helped in part by a succession of exit kicks from Souths that were short on mileage and allowed them to turn up the heat. A tidy snipe from Matt Gonzalez saw the nifty no.9 streak away and bide his time before drilling the ball into the hands of the seagulling Icely, but play was called back for a forward pass before the flanker had even touched down. Marginal at best.

However, two minutes later they plundered the short side once again off another box kick lacking in metres and got their reward. Fabian Goodall took the catch and returned with interest, firing inside for Wilson to drift across field and allow Shelley to release Muliufi. The powerful centre still had plenty to do when he received the ball, but managed to fend off the attentions of Tea Lama and dive for the corner with another two Rebels left flailing in his wake. Good luck stopping him from there.

Edmed couldn’t convert from out wide, and when former NRL player Tim Simona was pinged for holding on from the restart, Kagiassis was gifted the chance to strike back for Souths. But another unusual miss sent the Woodies to the sheds just two points behind at 14-12, having seen precious little ball in the second quarter.

The Rebels returned with the bit between their teeth, and off the back of another lineout drive – a feature weapon of Louden’s sides down the years – they opened up another gap on the scoreboard. Scrumhalf Harris broke off the back to send the hardworking Tea Lama cascading into traffic, and when the ball was sent down the line, a looping cut-out pass from Moseley hit fullback Daniel Bell on the charge, and he had the pacy Kagiassis outside him for a similarly impressive solo effort to Muliufi’s to find the same corner.

The radar returned in style to allow him to convert his own good work for 21-12, and Souths fortunes took another favourable turn when Simona was then shown a yellow for a high shot on a rampaging McLennan. In fairness to the Woods, they coped pretty well with a man down in defensive terms. But a litany of errors – wrong numbers at the lineout, passes in behind and to the floor, and a needless offside penalty – kept Souths interested for the 10 minutes they could enjoy the man advantage, and Kagiassis punished the latter oversight with another 3pts. 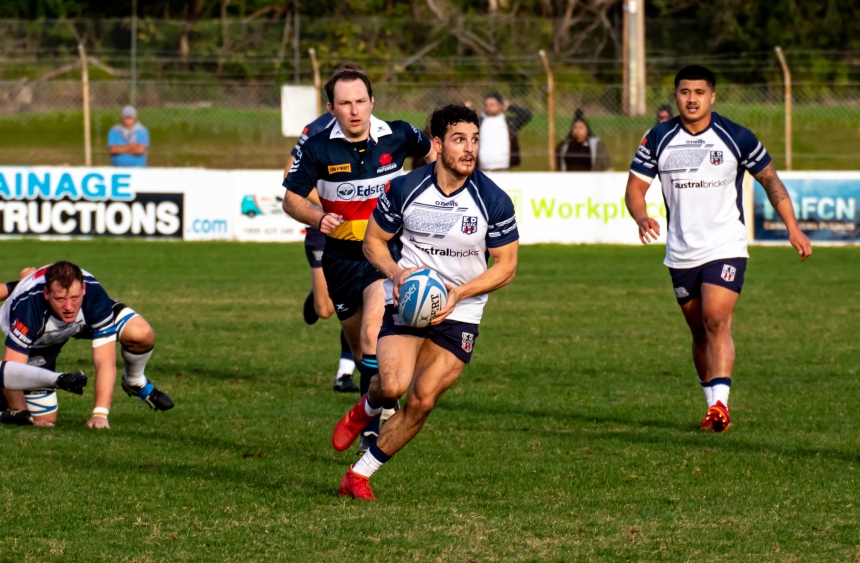 Matt Gonzalez made a welcome return to the Shute Shield with a try – Photo: Serge Gonzalez

It looked like it might be a long way back for Eastwood at that point. But Simona returned to the fray with no further damage on the scoreboard, and from nowhere, they promptly produced another five-pointer. Goodall was the instigator, the burly winger stepping inside one Rebel just outside the 10 metre line before pinning back the ears to swat aside Kagiassis and replacement Matt Teki, and hold off two more in the tackle before offloading for Gonzalez to swerve inside his opposite number Harris and race home.

The introduction of Chris Bell by the Woodies shortly after was an instant shot in the arm for their attacking prospects. The flyhalf they picked up from Subbies arrived to play a roving role from fullback, which asked a few more questions of a Souths defence that were suddenly faced with a comeback that had seemed unlikely just 10 minutes earlier.

When Kagiassis inexplicably missed another from in front after Eastwood were pinged for not rolling away, and Souths then put together a patient and disciplined thirteen phases only to knock in with the line in sight, there may have been a few nervous glances cast amongst Souths’ coaching think-tank.

But they were gift-wrapped a match-winner when the visitor’s, sparked by over eager replacement Ratu Tuisese, tried to run it from their own 22 and lost the ball in contact. Sensing the opportunity, scrumhalf Harris controlled his forward’s progress into the red zone, before enough numbers had been sucked in on one side for quick ball to do the rest on the other, the impressive McLennan drifting out of the range of Goodall to stretch for the chalk and bag his second.

The dye was cast with five left on the clock, when Bell’s positive cameo was abruptly ended by a yellow card for a deliberate knockdown with Nathan Lawson lying in wait with a clear run to the line, even though he was clearly attempting an intercept.

Souths drove another lineout from the penalty, with play called back for an infringement before replacement Liam Dwyer had flopped over. But an instant administering of the same dose drew a legal response, the hooker in place to dive home and rubber stamp victory on home soil, and get the Louden-inspired era at Forshaw Park well and truly underway.